The ascent of Everest 8848 m was first carried out from Nepal back in 1953 by Sir Edmund Hillary and Sherpa Tenzing Norgay. It was a truly outstanding action on a world scale.

Much has changed since then; new technology, skills and knowledge have made climbing Everest more accessible and safer. More than 10,000 people from all over the world have already climbed the summit (as of December 2021) and about 600 more people (half of them Sherpas) climb each year during the successful season.

Climbing Everest is an expensive and extremely difficult challenge that only a few can accomplish. On May 14, 2018 Taras Pozdniy (Kuluar leader), Roman Gorodechny and Dima Semerenko were standing on the top of the world together. There was still a difficult descent ahead, but the goal was achieved. Of the three members of the Everest team, all three made it to the summit.

Everest, with enough preparation, can be your first summit. But we still recommend climbing the lower eight-thousanders to prepare for the highest peak in the world. Other eight-thousanders include Cho Oyu (8188), Lhotse (8516), Makalu (8481), and Manaslu (8156). 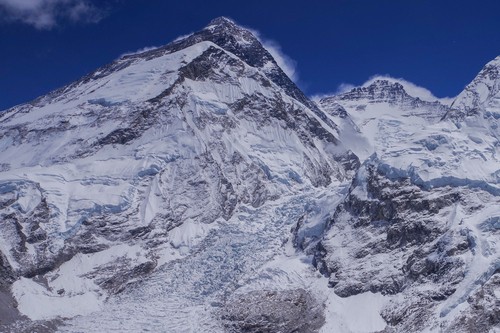 Climbing the highest peak in the world 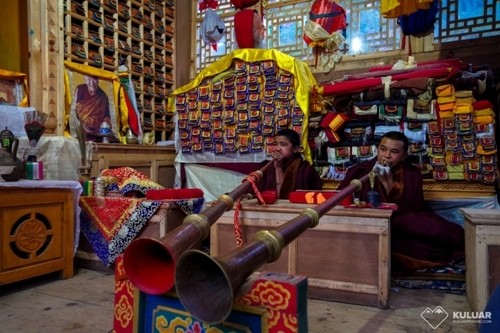 The High Mountain Monastery in Thyangboche 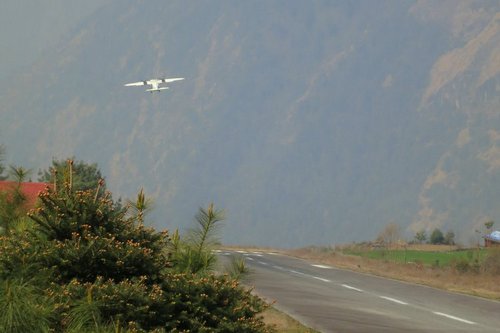 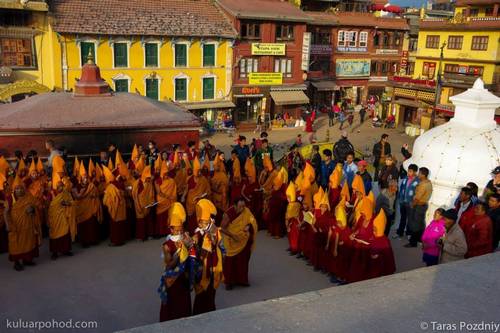 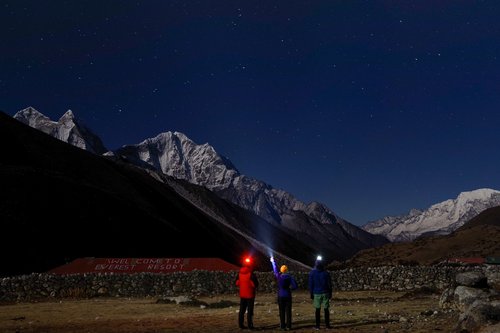 Starry sky of the Himalayas 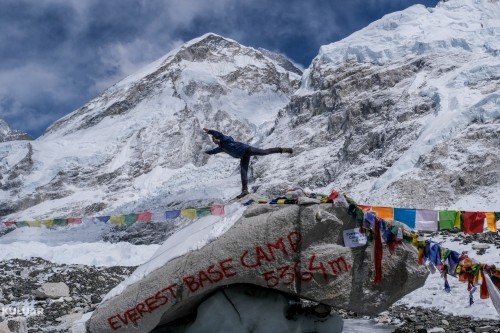 The famous Everest base camp 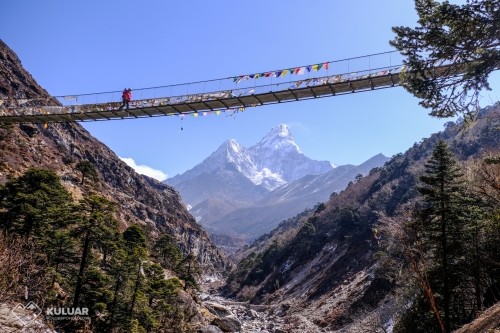 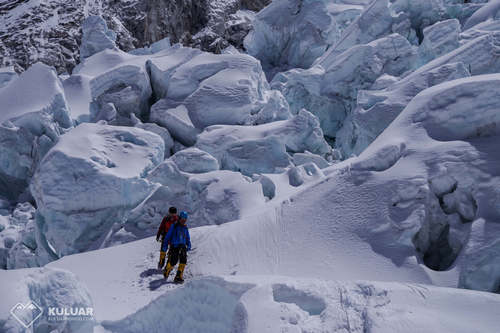 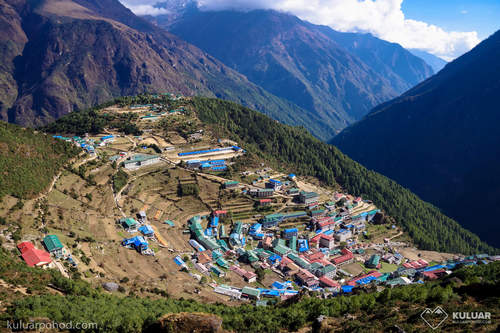 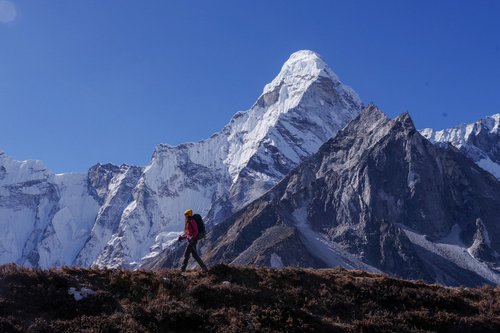 The Beauty of Ama Dablam 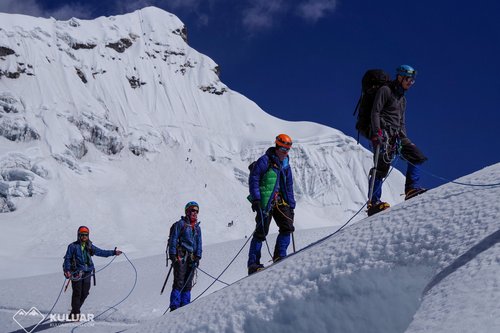 How to take part in the Everest ascent?

Climbing Everest - how I chose my partner

The day before yesterday (it was fall 2017) I had just returned from Nepal. It was my seventh season in my favorite country. This time we were able to climb Manaslu (8,163 m), the eighth peak in the world without oxygen. It was my first time at that altitude, I wondered how my body would behave.

After returning from the expedition to Manaslu in Nepal I stayed for two more months, taking the group on the Langtang trek and climbing Mera Peak (6,461m).

At the same time I was looking for someone to climb Everest with. Two important factors were the company's great experience and leadership in climbing above 8000m and a reasonable price.

It so happens that last years I spend up to 150 days in Nepal, I made a lot of friends and connections there. I'm treated very well because we bring more than 200 trekkers a year. Everyone is interested in working with us and give us good prices.

In my searching for partners for the 8000m climb, I looked for all the local companies I could find. Ukrainian and international companies had very high prices and in any case the whole organization the climb fell on the shoulders of the Nepalese. I wrote letters and met personally with a dozen people. I analyzed the proposals, the company's experience, the perspective, and the executives.

In the end I chose Seven Summit Treks (Not to be confused with the Seven Summit Club and other Seven Summits). There are several subjective and objective reasons for this:

The company's founders, Mingma and Dawa Sherpa, are the first brothers whose climbed all 14 eight-thousanders. I trust those who go to the mountains. I don't trust those who don't go and organize climbs.

Dawa Sherpa became the youngest climber who completed 14х8000m program at the age of 31. In total he has 22 climbs on the eight-thousanders.

About 300 climbers a year climb all eight-thousanders with the company.

Among the most successful cases is the organization of the ascent of K2. In 2012, 23 of 25 participants reached the summit, including Dawa himself. In 2014, 25 of the 27 participants climbed, with Dawa already tucked away at base camp. He did not want to go to K2 for the second time).

More than 300 Sherpas work in the company, including more than 200 were on the summit of Mount Everest.

They have their own helicopter company, which allows to respond promptly and without intermediaries in case of necessity. As a bonus - always fresh food in the first and second camps, delivered by helicopter.

Excellent offer including oxygen, personal Sherpa and two base camps (base and L2)

SST have similar vision of development to Kuluar, I just enjoyed communicating and working together.

Actually, getting to know the guys from Seven Summit Treks started from my Manaslu expedition. There were two nice meetings: the first time we were offered tea/coffee at Camp 1 - although we had nothing to do with them and had no friends there either. The second time we were offered them a flight from Samogon to Kathmandu at almost half the price, then our organizers offered to us. Of course, we gladly took the flight.

This is the story of my personal choice of the climbing company.

In the spring of 2018, we went to Everest. It was our first collaboration with SST, it was good enough, but I made myself a list of things to improve for the next time. I'm sure the service will be a notch higher each time.

Why Everest from Nepal?

Purely personal. I've been to both Tibet and Nepal. Tibet seemed very dry, windy and unfriendly to me. I did not like it. But I love Nepal with all my heart and I feel at home here.

Khumbu Icefall is one of the most beautiful places in the world. Its beauty is cold and dangerous, but I haven't seen anything like it anywhere else!

Everest is the highest mountain on the planet and one of the biggest challenges for any climber. Next you can climb other eight-thousanders or technically difficult peaks of lower altitude.

Needless to say, the choice of equipment for Everest should be approached with the full responsibility. You can be guided by one rule - take the warmest, it will not be hot. 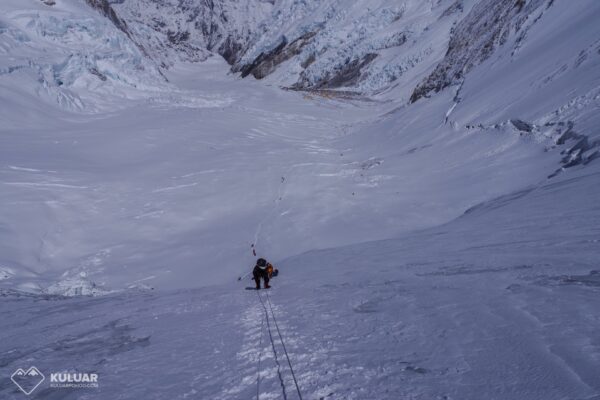 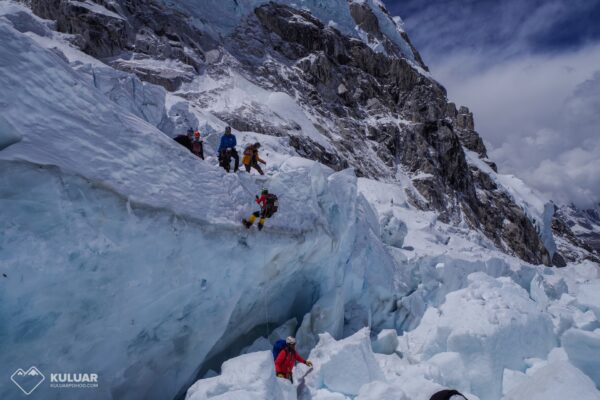 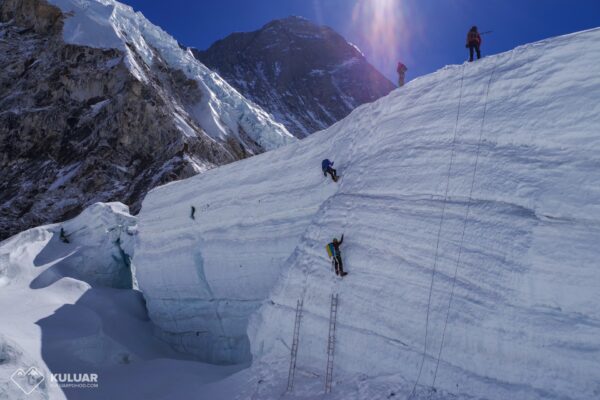 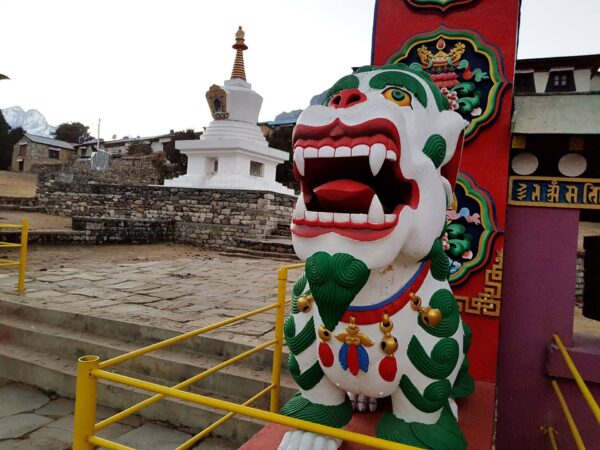 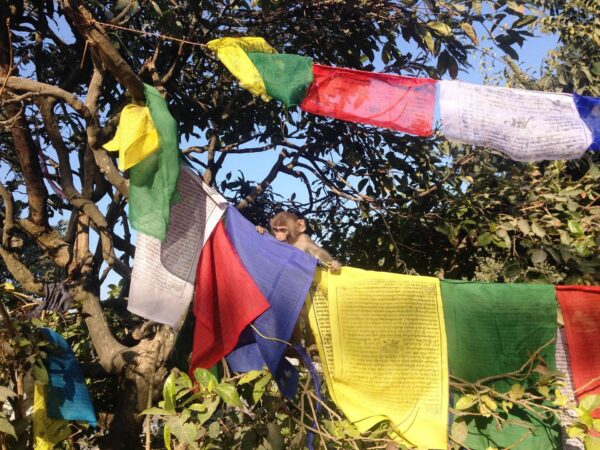 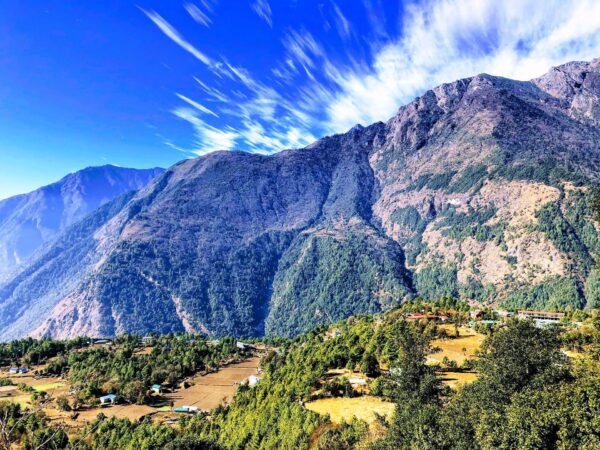 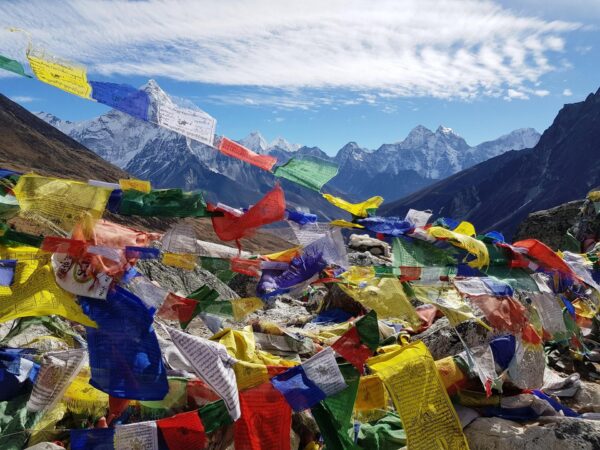 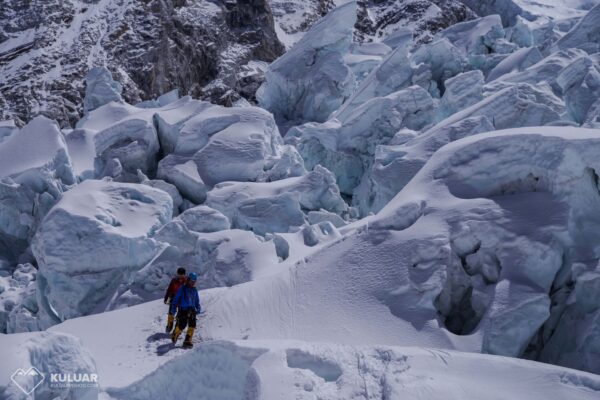 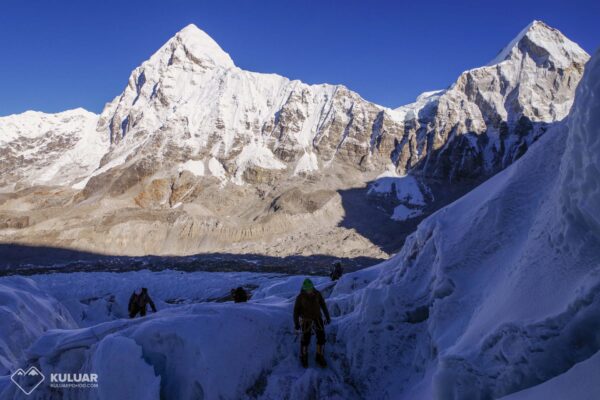 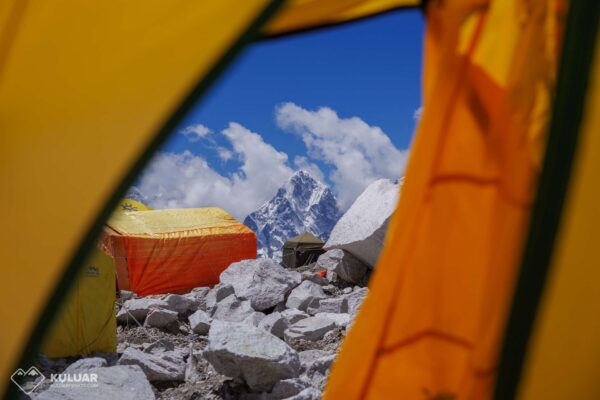 The price for Everest climbing includes escorting a multilingual-speaking group leader with experience of climbing 8000m or similar.

The price is valid for a group of three or more participants. If less, it probably needed to be recalculated.

To book a place in the group you need to make an advance payment of $10,000 to the bank account of the Nepali organizer.

The rest of the sum is to be transferred no later than one month before the start.

Important! In case of cancellation of the participant in program less than one month before the start - the prepayment is not refundable! "Yes! I could do it!" - Sergei's impressions after climbing Everest 01/06/20
Author: Sergei Denisenko
Everest expedition – climb 8848 m
Nepal
Overall rating
Teamleader rating
Manager rating
The best impression is when you stood on the very edge of the summit, raised your hands high and said: "Yes! I could do it!" It was the most unforgettable. The clouds, the sunrise, the strong wind - these are inexpressible emotions that last for 10-15 seconds. And then you realize you have to take pictures of the flags and slowly go down. So it was really great! The hardest part was all those days of waiting and when we were almost despairing we thought the weather wouldn't let us even try. Of course, the way to the summit was very difficult and hard. These two days of ascent, starting from 6400 and up to the summit. Of course it was not easy because the whole day long load and it was very serious. But when you get to the summit all the fatigue disappears for some fractions of a second and it seems as if there was nothing at all. You just came, went to the top and that's it. Compared to expectations... I'll say this: the summit is not easy, constant climbing, there is no drop down to rest. Deep snow in some places, rocks in some places, it is not very comfortable to go in crampons. My expectations? How could I expect anything when I have never been on such a great mountain. I'm very pleased and very thankful to everyone that I was able to climb and descend such a great peak! Thank you!
short The first Tajik on Everest. Vitaly Khinenson. Impressions after the summit
Author: Vitaly Hinenson
Everest expedition – climb 8848 m
Nepal
Overall rating
Teamleader rating
Manager rating
Congratulations to the whole team. To myself and to everyone! It was very difficult. I knew it would be difficult, but I did not think it would be so difficult! It seems to be all prepared both physically and emotionally, but still it was very scary and very difficult! The weather conditions are great, the team is great, the organization is great. I think that the pause we had justified itself - less risk means a better chance for success. Many thanks to all, I am very happy! I thought it would be a little easier. Despite all the information on the difficulties, weather, conditions - I wanted that it would be a little easier. But on the other hand... This is the top of the world! And to expect the easy ascent is simply foolish! I wish the following climbers to prepare well physically, emotionally, technically and organizationally. Take Everest as seriously as possible. It is not an easy mountain. Maybe it is not so difficult technically, but it is difficult too. It's the peak - it's the goal of a lifetime, I wish everybody to take it as seriously as possible. And you guys, thank you very much! Both our team and the Sherpa team are very cool.
short The first woman from Kiev on Everest - Natasha Vladykina. Impressions after the summit
Author: Natalia Vladykina
Everest expedition – climb 8848 m
Nepal
Overall rating
Teamleader rating
Manager rating
This is the most incredible adventure of my life! I've probably been walking to it for over two years. How hard it was, how difficult it was, how many people gave up and left this season... But I was lucky with my team of like-minded people who waited till the last weather window and actually we closed the Everest season. We left the South Saddle (7900) today, we saw the cyclone already approaching, the clouds were falling. We saw the wind... We did it, it was unbelievable! Summit day (shturm) - it is very difficult. It's hard, it's tough, it's on the limit of possibility, but it was worth it! I expected it to be so hard. I expected it to be hard, I prepared myself. Most of all I was afraid that we would not make it because of the weather, but Nikita convinced us that there would be a weather window. we sat up to the last one and it was worth it!
Dates Day by day In backpack Questions Gallery COST Reviews