Show the world the tongue Troll's Tongue Trek - hiking in Norway
Norway
Author: Diana Gutsul, 30, Moscow, Russia
Teamleader: Mykola Sakovych
Overall rating
Teamleader rating
Manager rating
A few years ago on the Internet I saw a picture of Troll's Tongue in Norway: it struck me so much that I immediately thought of a dream to visit it. I thought of the dream, but I did not do anything with it. And last year I suddenly remembered this place and realized that this gestalt should be closed: who, if not me, will fulfill my wish? It was unlikely that they would send me on a business trip there, and it was possible that someone would give me a ticket, but it was also unlikely. I realized that I already had everything I needed to make my dream come true.

I started searching the Internet for options for the route and came across a cool detailed article. From it I realized that the weather in Norway is unpredictable and there is an option not just to visit the Tongue, but also to spend the night there (and therefore, if it suddenly rains in the evening, to beg for sunshine in the morning (but not necessarily)).

This idea instantly crossed out my intention to go there on my own. The article was posted on the Kuluar website, so I went on to study the dates and conditions of the trip. But my intention extinguished as quickly as it flared up: I opened the section of necessary things for travel, saw a lot of incomprehensible words (baf? leggings?) and realized that I did not want to get a whole list of things for one trip.

A year went by. I do not remember what I was doing, but I remembered again about Norway, found the website “Kuluar”, opened the list of necessities… and closed it again! And then I realized that this is not the way things work – you either have to fulfill the dream, or say goodbye to it. But the latter was not my option. A colleague gave me a huge backpack, a friend gave me hiking boots, another friend’s husband gave me Nordic walking poles. All the other things I bought. Norway is not the first country I went to visit on my own, but the first where I went in this “format” – to unknown people, with a backpack, which was always trying to knock me on my back, in the cold, which I do not like. 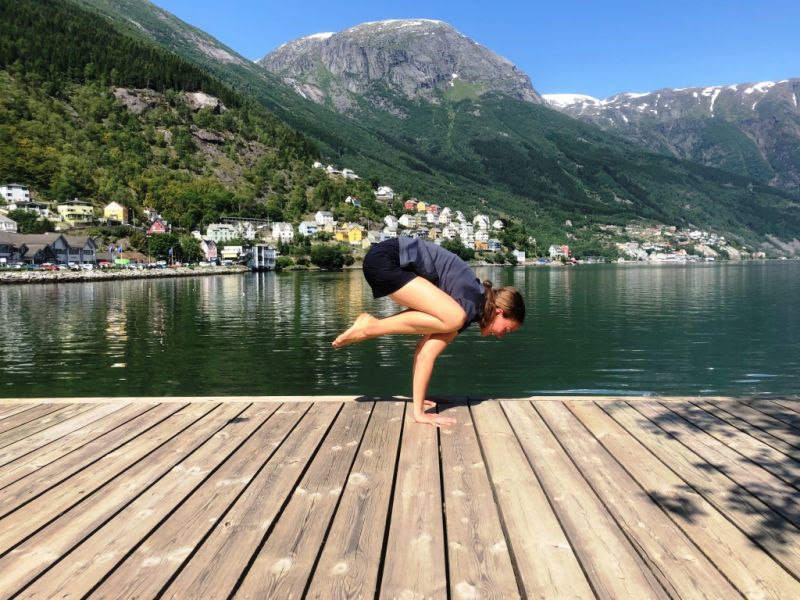 In the evening I arrived in Bergen – gray, rainy, dank, but so damn beautiful! At the hostel we were met by our guides Oleg and Kolya, absolutely wonderful guys, and it was obvious that the hike would be fun and great. And it turned out, but with one but: it also turned out to be very heavy, but first things first. The next morning we left for Odda – the road in the bus took a few hours, but they flew by unnoticed, because all the time we had to look out the window. The scenery in Norway is absolute magic. Add to that the classical music played by the driver, and you’re a spectator of the most amazing movie. We spent the night in tents at the foot of one of the mountains. By the way, you’ll never guess what the guides cooked for dinner. Not buckwheat with stew (although it was fine and was the other day), not pasta and meat (they were cool too and were too), but corn porridge with salty cheese and cracklings. Sound like? Very restaurant sounding! Granted, I’m a vegetarian and don’t eat anything like that, but I was genuinely happy for the others 😉 As for me, it turned out to be a lot easier than I thought it would be: the guides, when cooking, suggested that I set aside a portion for myself before adding animal products to it – perfect!

So, the day arrived: it was drizzling with rain in the morning and we took a cab to the start site. From there it was a 4 km walk (clarification unnecessary, we only walked further) along the serpentine. I thought that I would spit out my internal organs, I thought that I would not make it to the end, although it was only the beginning. The backpack was unbearably heavy – my shoulders and back began to hurt as soon as I put it on. It was hot to walk, but cold to stand still. My shoes were chafing my bones. But I was fulfilling a dream. I walked through Norway, I walked to the Troll’s Tongue, I was surrounded by fabulous scenery and I realized that I actually had two choices: to whine inside and suffer or to enjoy the process. I chose the second.

I will always remember these expanses, these amazing clouds and haze. Those huge rocks of green. Those waterfalls and blue-blue skies. I’ll remember how at one point I stopped hearing the inner noise, and heard only birdsong, my own heavy breathing, and the pounding of sticks (be sure to take them!). I remember when I saw HIM – he was even better than the pictures on the internet. They say the coolest thing is to have been to Troll’s Tongue and not take a picture of it. I took a picture, but not right away:) and not in a dress. And in general, there was a wonderful feeling of silence and happiness inside from everything that was going on up there. 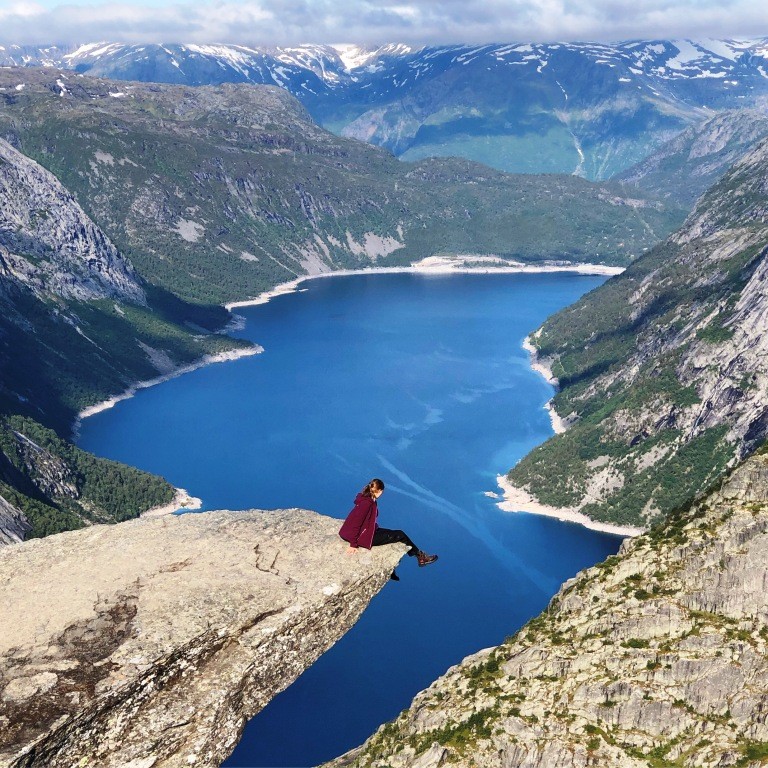 We were very lucky with the weather, although we were also lucky to get cold. The next day there was an 18 km downhill, but for some reason with constant uphill climbs. We walked on snow, rocks, water, moss. I was walking and did not understand why such difficulties, why can not we just go down and take a cab. But we walked. After spending the night in the tent we started walking down again, but for five kilometers. Realizing that Tongue was behind us and it would soon be over, I began to appreciate every moment and every rock even more. Despite the fact that it was already the third and fourth day on the road, I still could not get used to what I was observing. Describing the nature of Norway in words makes absolutely no sense!

Then there was Odda, there was a bus, a ship, and Bergen again. I went back to the city without feeling the weight behind my back. The backpack was still as weighty, but I, first of all, strengthened myself, and secondly, I realized that it is soooo little things! Everything that was in the background – the weather, the difficulties, some inconveniences – is absolute nonsense. It will not remain in memory. But for a long time will warm the soul of memories of hearty conversations with the group, the humor of the guides, personal overcoming and inner victories, the wonderful nature of Norway and, of course, HE – Troll Language.

As for the things I had with me: I took everything according to the list and absolutely everything came in handy. Only two pairs of socks weren’t needed, but I do realize that we were lucky with the weather and things would have been completely different otherwise. So feel free to trust “Couloir” and listen to their recommendations, it will make your trip as comfortable as possible and, of course, absolutely unforgettable. 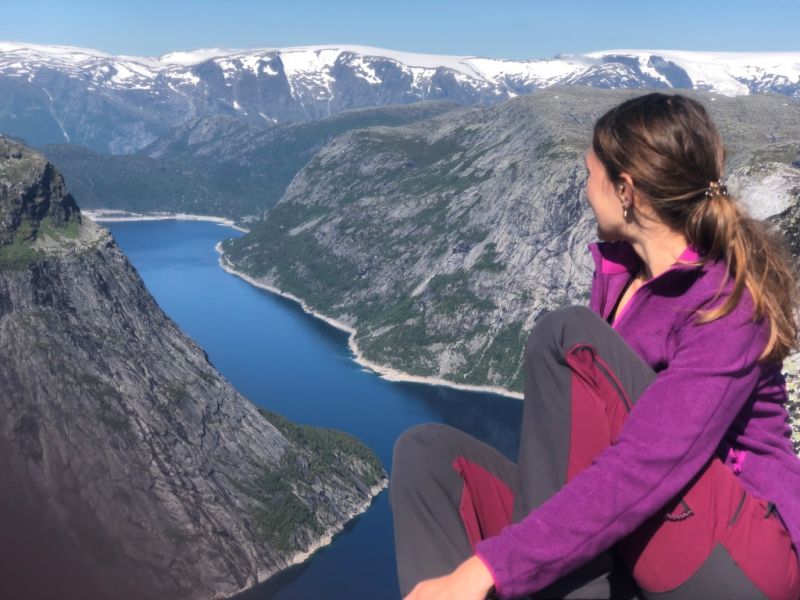