In the Land of Vikings and Trolls, Part 2 - Troll Language Troll's Tongue Trek - hiking in Norway
Norway
Author: Brazhnik Alexander, 35, Russia, Moscow
Teamleader: Taras Pozdnii
Overall rating
Teamleader rating
Manager rating
Our respite in Bergen is coming to an end... a wonderful day in civilization with hot showers and delicious food. Bergen was once a very large trading center and even the capital of Norway. To this day, hundreds of thousands of tourists come here to wander the old waterfront with wooden houses, to shop in the local stores.

And most importantly – to enjoy fish delicacies – crabs, lobsters, shrimps of all kinds, mussels, fish fresh, salted, smoked, different kinds of caviar… the stomach makes welcoming trills, waiting to be filled soon. I got myself a sea plateau – a plate with a set of everything in the sea… at a price of about 600 crowns, which is about 4500 rubles. Not cheap, but it’s Norway, baby. According to the sellers in this market makes 8000-9000 euros a month. Not bad, I’ll tell you. So here you meet a lot of Italians, Spaniards, the French, who came to the northern country for the long money and grasping at any, even not very attractive work.

Even later, traveling on a hike, in one of the shelters we met a grandfather and his granddaughter, a local. I asked him what, in his opinion, is the success of Norway? A high standard of living, a growing economy… He replied that we are lucky, we have received a lot from nature – minerals, fish and seafood, and only 5 million people – a third of Moscow. And for me the answer is not only in the fact that we are lucky, but in how this luck is used! But Russia got a tremendous amount from nature, and 60% of the population can barely make ends meet…

With these thoughts about our homeland, we met with a new group. Well as new, five of us stayed and to us added 12 more. And this horde of 17 tourists was planned to go to the Troll’s Tongue – 4 days of going, about 50 km. I had already become a thoughtful hiker, I had left some things in Bergen and my backpacking friend had lost a lot of weight)) Of course, Taras added 4 kilograms of food – yachka and granola, but even they did not make the backpack fatally heavy. About 18-20 kilograms… well, just for fun!

We got by bus to the town of Odd, where we are going to climb Tongue in the morning. In the evening the group got acquainted with each other, each of them told a little bit about himself… This time I did not want to repeat the story about myself, so I decided to fantasize a little. I told people that I worked at Mossovet Theatre, played in plays… I travel a lot, because my grandma works at the Institute for Asia and Africa and takes me with her (where to find such a grandma?))… That there’s a very important family history connected to Norway… That my great-grandfather, Alexander Grigorevich, was a sailor on a ship in WWI, and was blown up on a mine – ….. So on and on… it seems the group is “buying” my story. Those in the know giggle and ask me (those dogs) qualifying questions – were you named after your great-grandfather? And where did you study before the theater? I get out of this fight with dignity … and here’s a shot in the eye – Can’t you recite something from the play? I had to hastily recall Musa Dzhalil’s poem Barbarism, with which I won the recitation contest in third grade… and to recite it for the group… It seemed to be able to convince people. With smiles we drifted off to sleep in our tents. Soon the smiles will be completely gone from our faces… 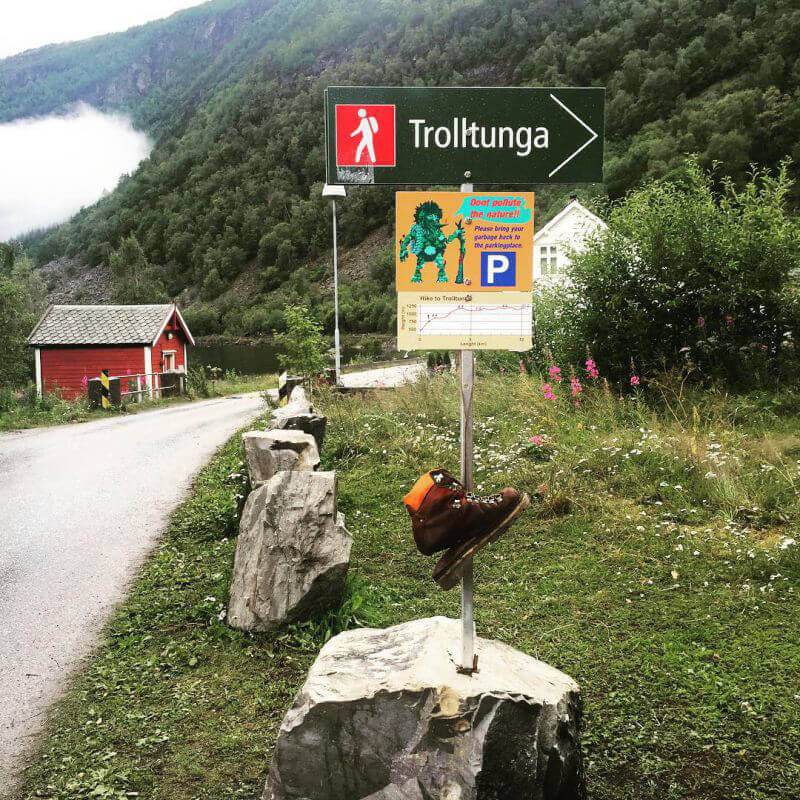 Noon the next day. We had already gone seven kilometers uphill on asphalt, and the most important thing is ahead – 11 km to the Troll’s Tongue. All the way up. And no asphalt ((( and on boulders and muddy … At the first 4 km altitude set 750 meters, well, the slope of the order of 20 degrees. That’s if you run or walk on a treadmill in the gym, the maximum level of ascent on it will be 14 degrees. So increase it by half, put a backpack of 20 kg on your shoulders and crawl for two or three hours… This is what the climb to the tongue looks like. You are also being overtaken by crowds of people with light backpacks in a hurry to Tongue to take pictures and have time to come down before dark. We’re not rushing anywhere, we’re spending the night at the Tongue. 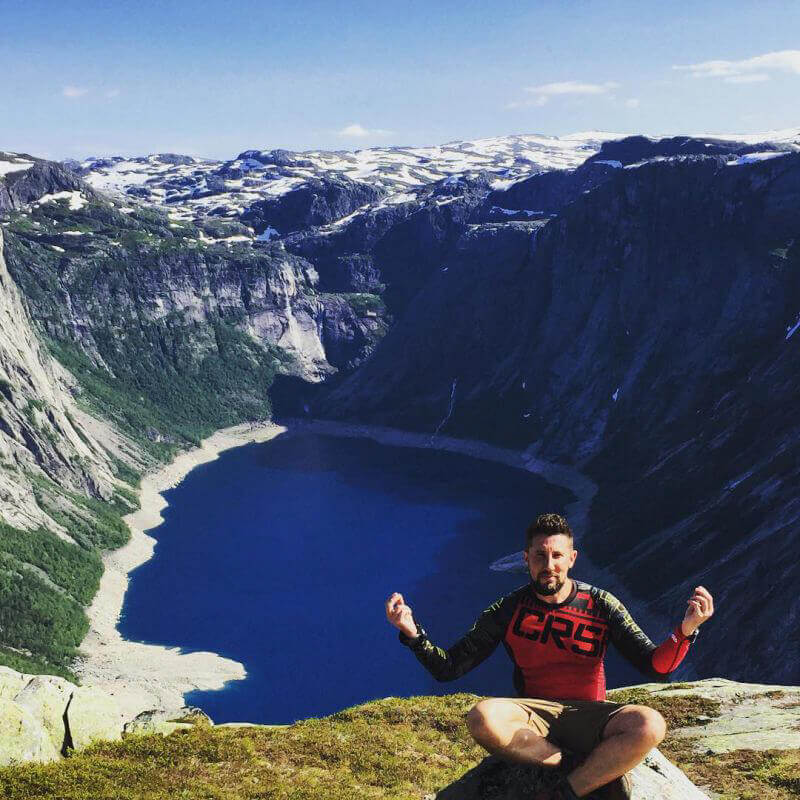 And I have to admit that I have no strength at all. I thought my body was already accustomed to the load, that everything terrible was over, but no… again a little death and both shooting knees on the way up… inner tears were blown away by the strong wind… I cried, but crawled… everybody felt bad… Crawled through force… After four km it became easier, small ascents and descents up to the tongue. Not far from it, we found a small boarded-up house shelter… We opened the doors – six beds in two tiers, two chairs, a stove of “burzhuyka” type and not very clean. We spit on the dirt. Some lucky guys slept in the house, in the warmth… the rest stayed in tents in the wind, knocking them down. 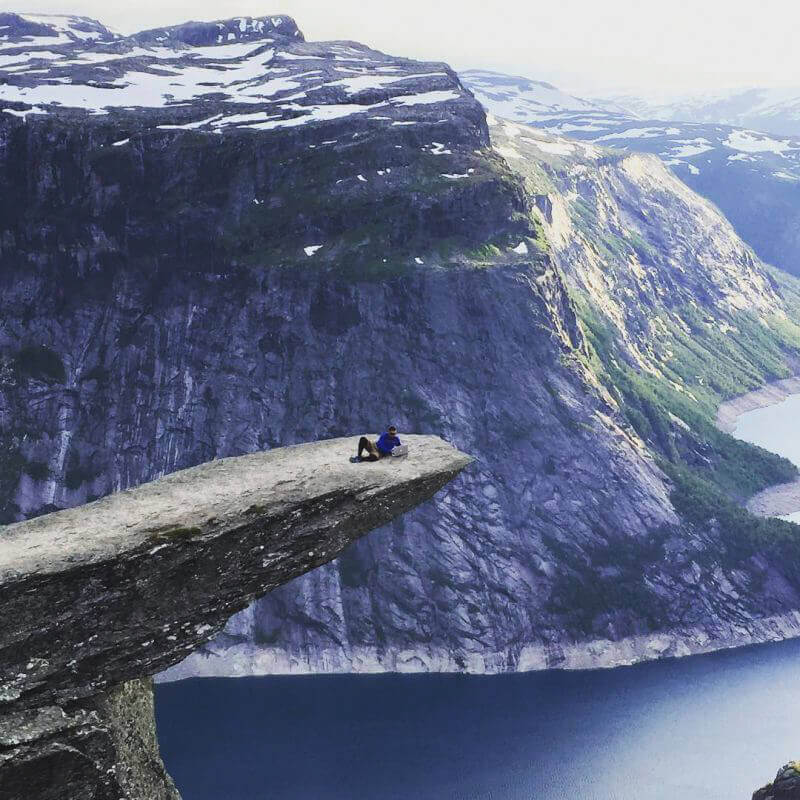 Later we go to take pictures on the Tongue, when the queue of those who want to take pictures has dispersed. I take a chair… photos with a chair on the Tongue should add some absurdity to the photos… I also take my laptop. That’s how I take my picture – on a chair with a laptop on Tongue. I am very afraid to stand on the edge… the height of 380 meters and strong wind… Someone is not afraid – they sit on the edge of the tongue with legs hanging down… I am afraid and I envy at the same time… the fear overpowers me… I am certainly a hero))) 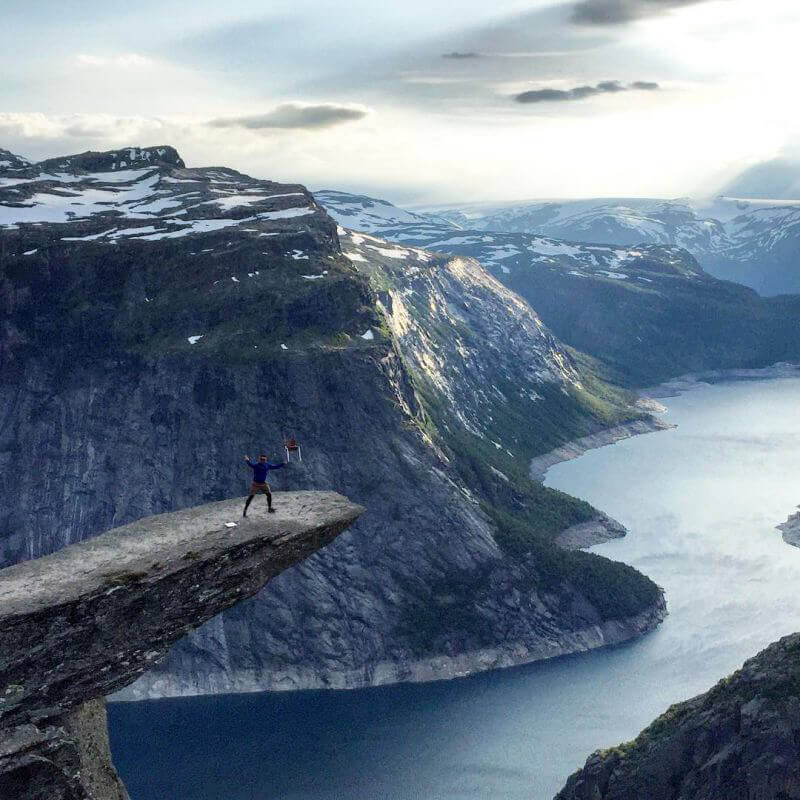 In the morning we went further, ate a yachka, my backpack was like a fluff. 20 km of hiking, often in the snow, was easy enough. The only thing, on the steep descent I broke my poles … they could not withstand the load of the hike(((( The same thing happens with the pants and boots … Pants suffered even earlier, when descending on the fifth point from the snow tops … on it now there is a gaping ventilation. The boots are torn in several places. I can’t wait for the hike to be over so I can tell them au revoir… 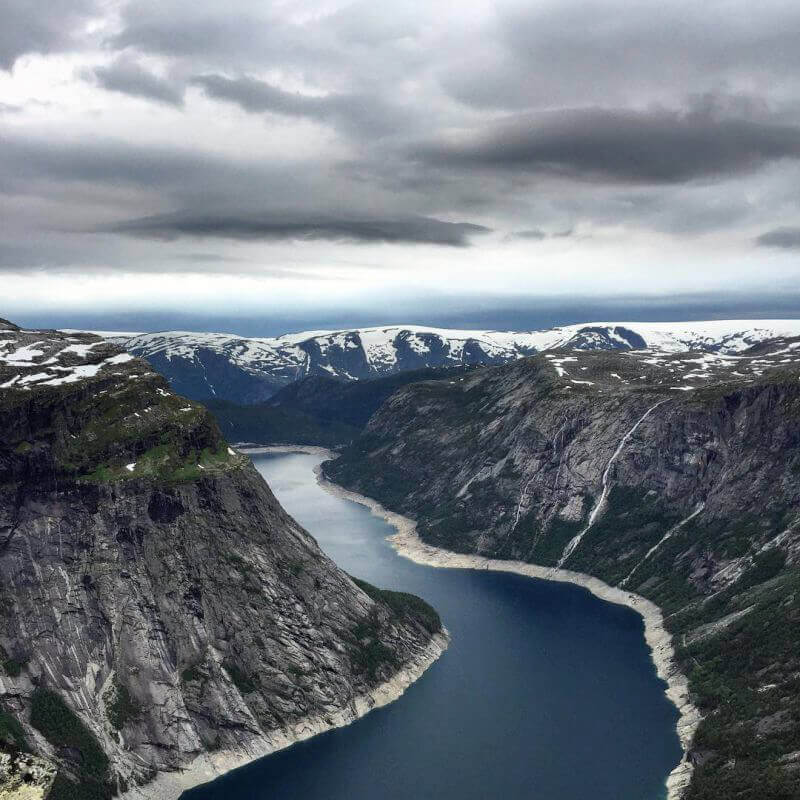 Our last night in the mountains is in one of the local shelters. There’s just a house standing there. In the middle of nowhere… and in it are beds, blankets with pillows, food, stove, firewood… on the wall hangs a price list, and next to it is a box with a slot… you stop, get warm, dry yourself and leave money in the box…. 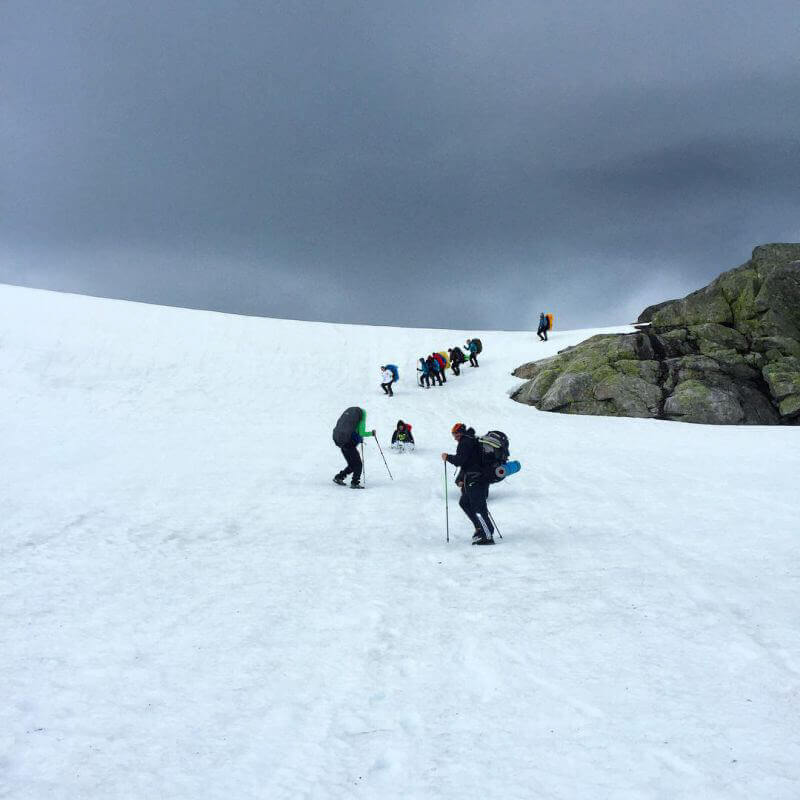 Here we met a Norwegian grandfather and his granddaughter, who told me about his country’s good luck. Of course, the grandfather was shocked when 18 wet and hungry people began to cram into the house…. By the way it was designed for 12 people … at least that many beds … but that did not stop us … some slept in twos on the bed, some on the floor … but all settled down. Although there were some who couldn’t make it through their last night in Norway without a tent! Real tourists… there were four of them… The rest were in the cabin. Such snoring I never heard in my life… poor grandfather… I did not envy him, given that in the evening he was fed with the remnants of lard, without even offering bread(((( 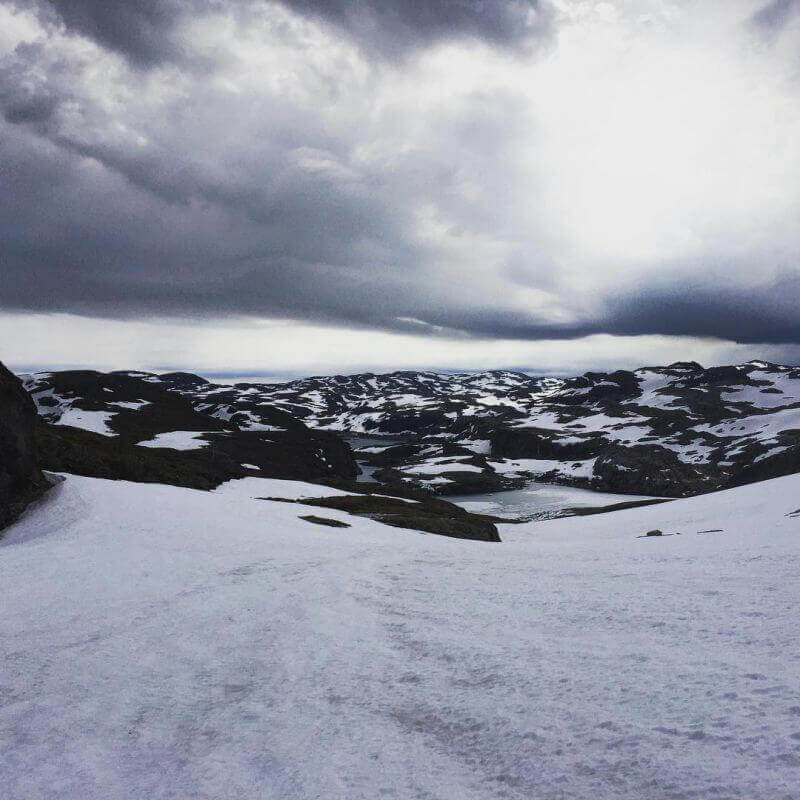 In the morning it’s the last leg to Odda, a 13 km descent. Headphones in my ears and with a smile I finish my two-week Norwegian trek. With tears of happiness I say goodbye to my pants and boots and forward to the new civilized life … Milan calls!!! 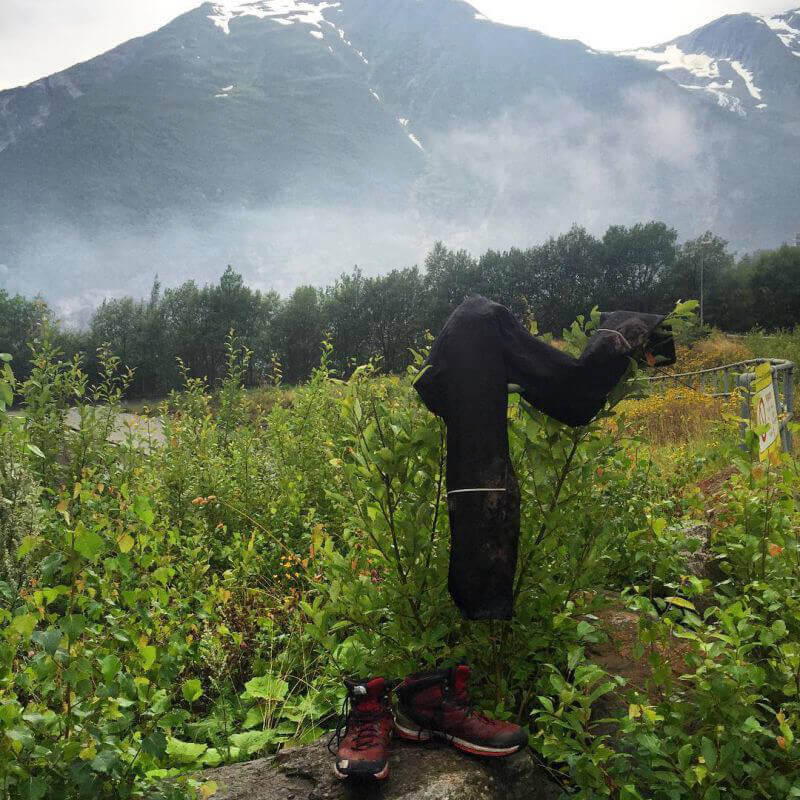 Train to Oslo, then a plane to Milan. Already on the train a message on the loudspeaker – “We invite you to our cafeteria, unfortunately we can not offer you a hot meal, yesterday we had a stove exploded and the remains of the explosion you can still observe in the dining car. But we do offer you a large selection of cold snacks and drinks. Welcome!!!” 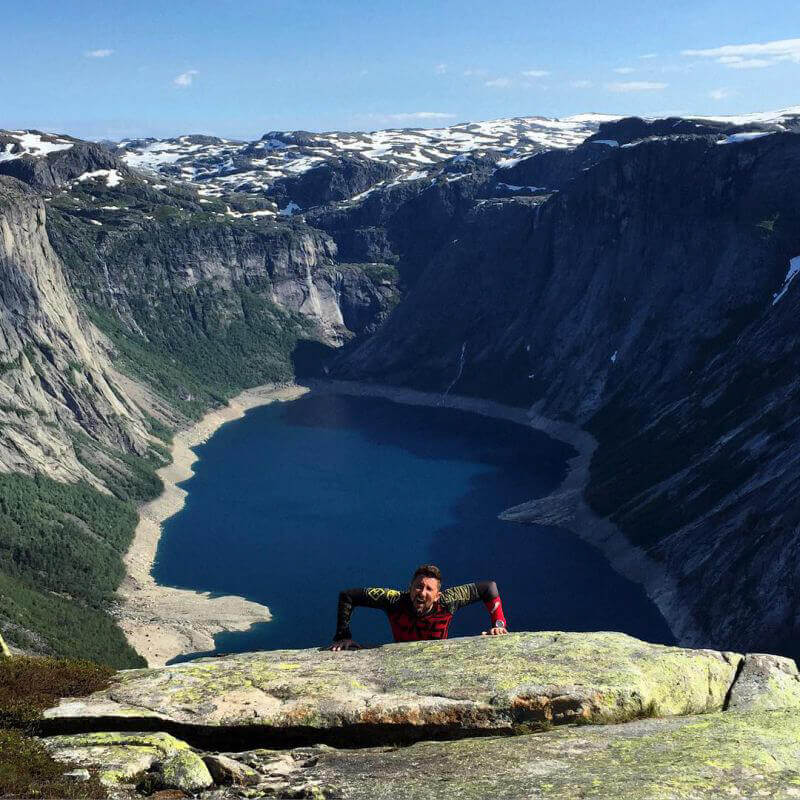 Welcome to Norway!!!! A large selection of cold snacks you are definitely guaranteed))))

If you haven’t read it, we recommend reading Part 1: In the Land of Vikings and Trolls – Part 1