Between and above the clouds overlooking the Caucasus Mountains Climbing Kazbek
Georgia
Author: Alexander Karpovich, Belarus, Minsk
Teamleaders: Павел Кротюк, Oleksandr Pavlov
Overall rating
Teamleader rating
Manager rating
For me, climbing Kazbek was a mental and physical challenge, so I decided to go to such a height after four inspiring hikes in different countries with my beloved Kuluar.

I am finishing this text in the months of preparation and in anticipation of the March 2018 trek in Nepal to Everest base camp with Taras Pozdnii. But back to the June climb!

On the first day we drove from Tbilisi to Stepantsminda village along the scenic Georgian Military Highway, checked into a hostel, got acquainted with all the group members and checked our equipment. And the most important thing - the direct view from the village to Kazbek, which was hiding behind the clouds, and then looked out, beckoning with its majesty of a huge wall of snow. The next day we woke up in the morning, with our backpacks packed and the weather fine, and set off for the mountain from the beautiful Gergeti Temple, where we had a chance to stop by. 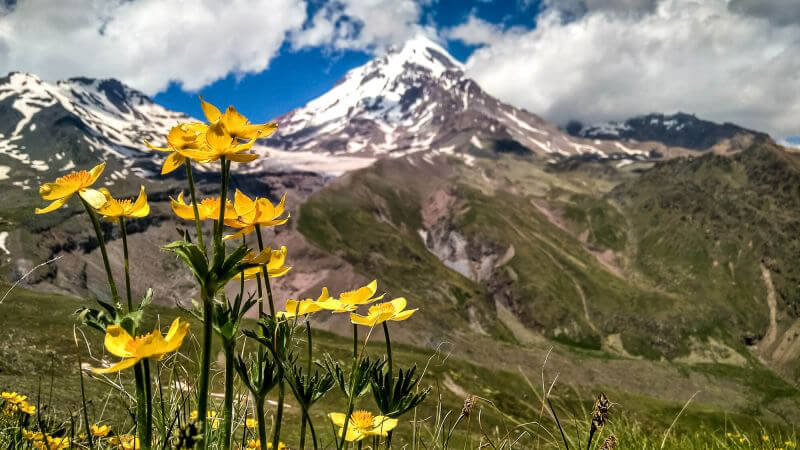 The trek to the next stop at Meteostation (3680 m) took about 8 hours with a climb of 1,500 meters. About 500-600 meters up to the camp all the greenery disappeared, being replaced only by rocks and ice. Fascinating scenery opens up with every gained meter, but the lowering of the amount of oxygen with altitude causes rapid shortness of breath and occasional headaches. This means that the acclimatization process has begun... 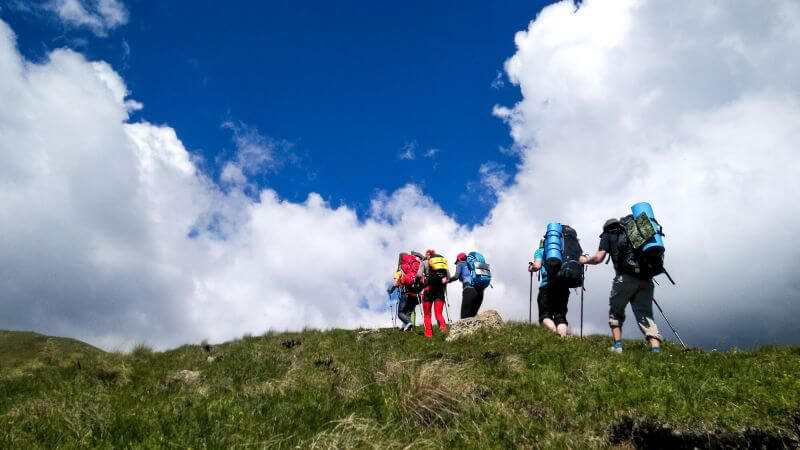 Because the body gradually gets used to the altitude, we devoted the third day to acclimatization and training. As we gained altitude from the tent camp near the weather station and along the route, there were fewer and fewer rocks and more snow. Along the way, along the half-destroyed rock walls, we were accompanied by the constant rumbling of rockfalls and small avalanches in the distance with a slight noise. The temperature was dropping noticeably, the first hail and snow showers appeared, and we were able to put down jackets over our fleece and windbreakers. We worked on ice-axe detentions on the snowy slopes, tried to walk in bundles, someone tried to walk in crampons for the first time, so, it was fun 🙂 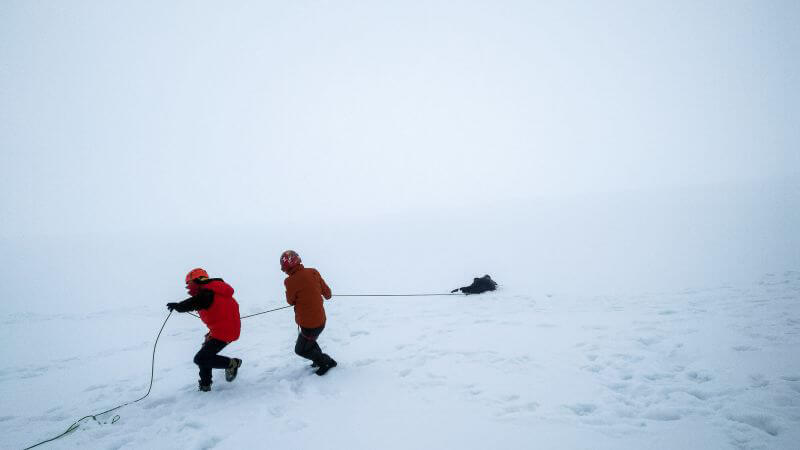 Everyone's symptoms of altitude sickness are subjective, but in general they fit into the picture when there is a lack of oxygen and are quite tolerable. We looked out for an approximate place to camp tomorrow in this snow-white wilderness and began to descend. By the end of the day the weather had improved and it was more fun to go, considering that you are, like in a fairy tale, coming down from a height where everything is in fog (in clouds) in sunny weather. 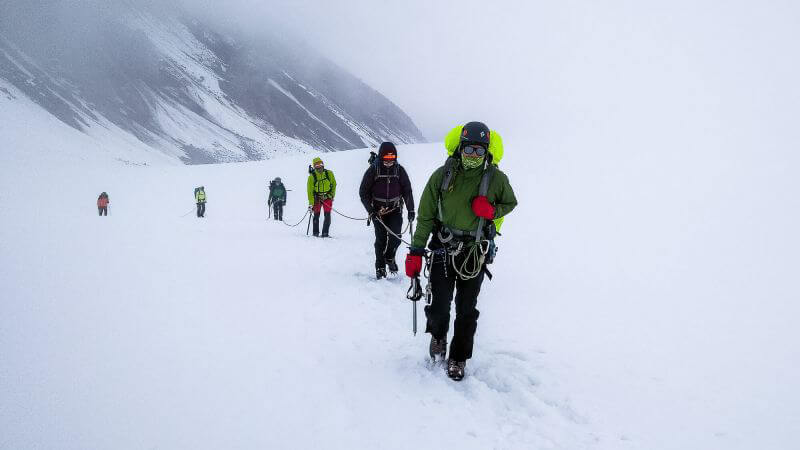 Trekking to the summit camp

We took the familiar trail to the firn plateau and set up camp on the spot we had chosen the day before. The passage was not long, but it took most of the time to build windbreaks for our tents. A few hours of building protection for our tents, kitchen, and restroom. Our neighbors (guys from another group) were surprised and thought we knew something about the weather and were so thoroughly fortified in the middle of a snowy field! And, after asking us for shovels and a saw, they also began to build a shelter for themselves. By the way, all these structures were still occupied by other climbers long after us. And today we had an early dinner, packed and checked our gear, because the ascent was planned for 1 am. We filled the thermoses with hot tea. We melted snow and made boiling water for the caloric sublimates for dinner and breakfast, if you can call it breakfast just after midnight 🙂 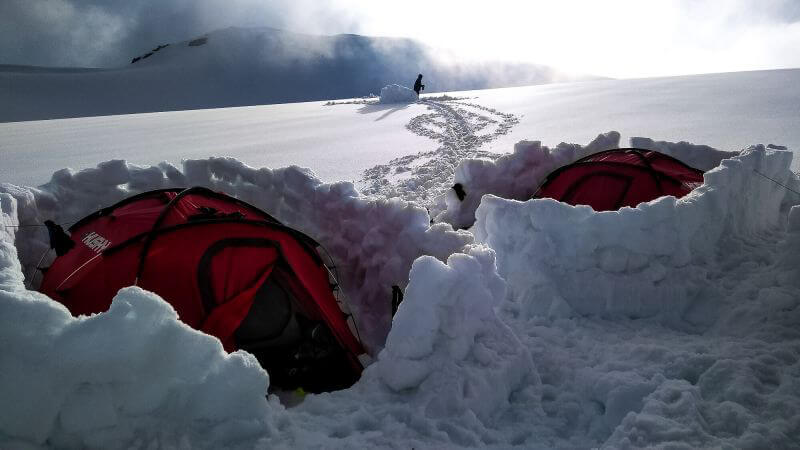 Writing about the summit peak is difficult and everything seems implausible afterwards. It is difficult to put into words the subtle feelings that are bubbling inside. The view of Vladikavkaz glowing at night was inexpressible, as if from an airplane, which generally corresponded to the altitude. This part of the mountain was already in Russia (Kazbek stands on the border between the two countries). Slowly, in the light of flashlights, we climbed up and when I saw that Maxim in front turned off his headlamp, I did the same. The moon and the white snow on the reflection was enough to illuminate the road and the night scenery. Too bad phone cameras can't transmit and in principle reproduce in the dark the beauty that surrounded us. The moonlit, solid tier of clouds that was below our level behind us was one of those sights that you carry with you through life. 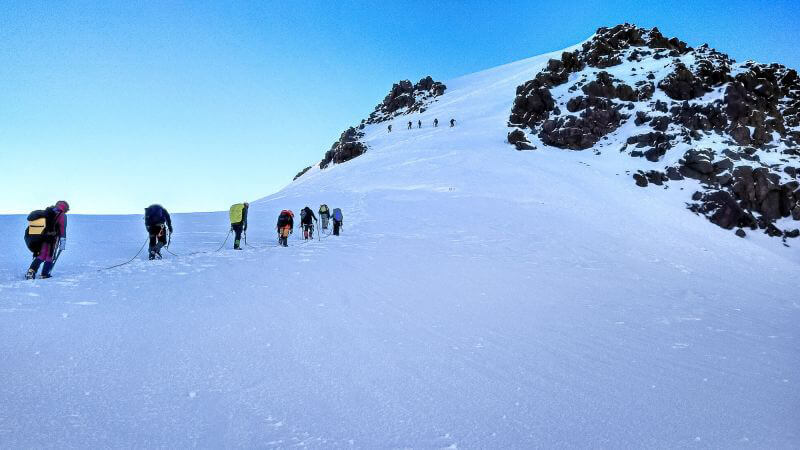 My toes were freezing most of the way until dawn, and a decent amount of energy was spent constantly warming them up by moving and running the blood through my feet by waving at the stops. Thoughts to turn around began to beat alarmingly as Vova, who could no longer walk, and Olya, with frostbitten toes, walked back with one guide. After changing socks at one of the last stops and getting shortness of breath and a little dizziness instead of rest, they were already on their way to the summit after sunrise. 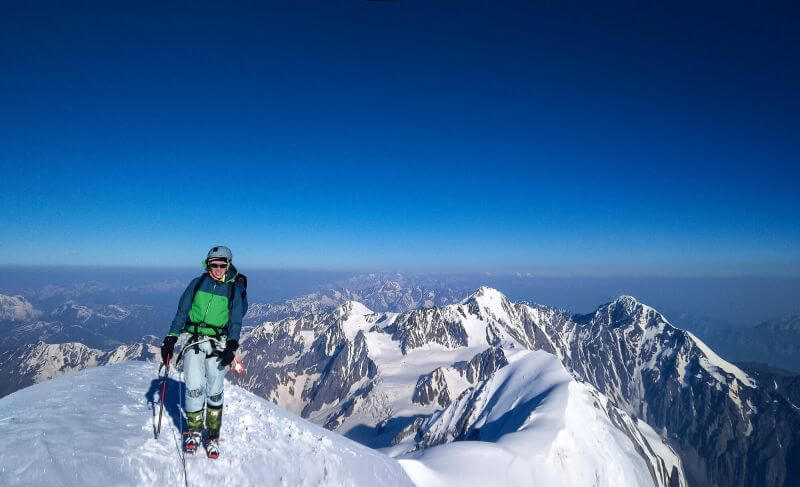 Feelings overflowed when you approached the summit, because you did not just pass the route of climbing Kazbek, but prepared for it for many months and years in other hikes and excursions. All this merged and experienced with a sense of great satisfaction for the last 20-30 steps to the peak of the mountain. I guess that's what mountain hiking is all about! 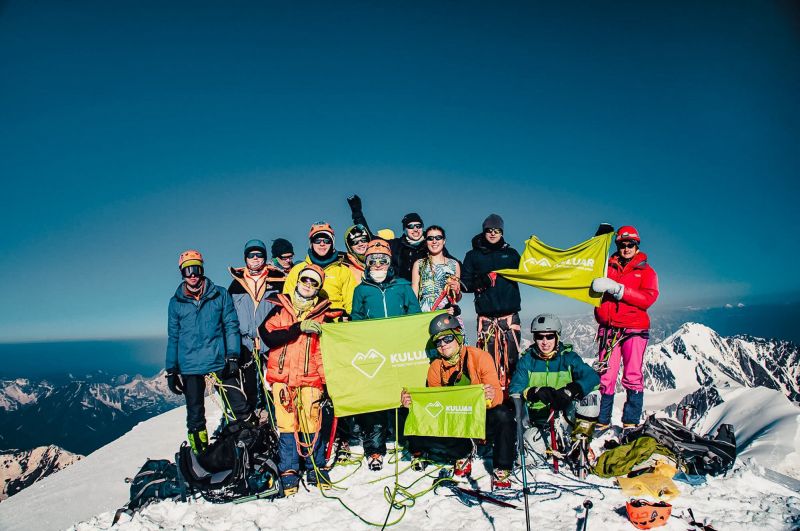 Day 6. Descent from the mountain.

The day of transition from a continuous series of rocks, glaciers, snow and being on the border of cloudiness and above it to greenery, warmth, the comfort of civilization, Georgian wine and cuisine. 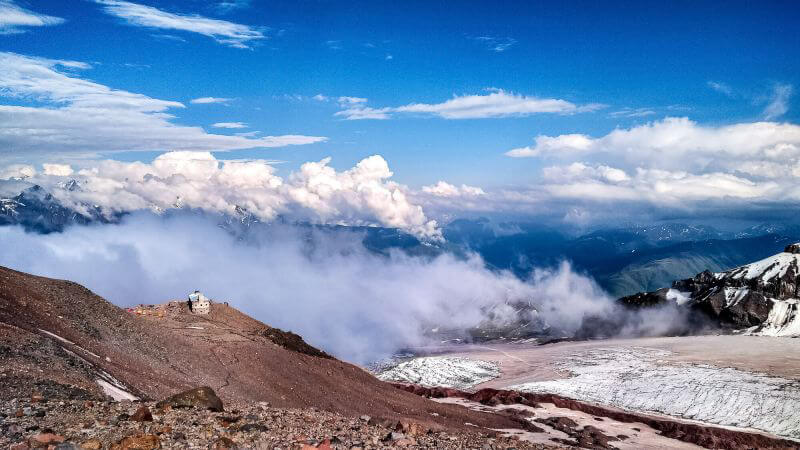 In the pictures you can clearly see what the sun does at 4-5 thousand meters in a couple of hours with your lip ajar, when you swallow the discharged air with your mouth (my mother told me - "don't catch flies, cover your mouth!" This is what a sunburned lower lip looks like in the morning. A couple of other guys had the same thing, but they took fun selfies of red-puffed climbers 🙂 After the night assault it was not our usual cloudiness and being between the scorching sun and its reflection from the snow, when you get hot, like on a frying pan. The swelling from the burn went down fairly quickly and did not cause any serious discomfort. After all, the mountain had to take its toll, and that's a small price to pay. 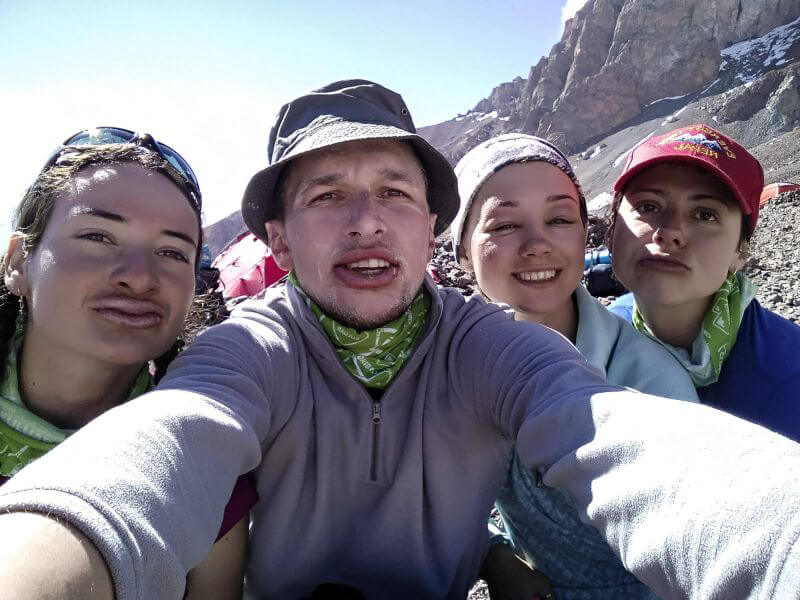 As for the meaning of all trekking and climbing in the mountains, it is different for everyone, because it is something involuntarily pulling you, although you are constantly overcoming something and losing something, and often it is just monotonous work and movement in the fog over the gray terrain. But I can say for sure that you go to the mountains not only for the mountains, but also for the people who share with you all the difficulties and joyful moments. Unfortunately, this time we could not go together with my wife, Ksyusha, who could not ascend Kazbek because of rehabilitation after an injury. But I want to say thank you to everyone who shared this route with me: Max Homyakevich, with whom we have passed Jotunheimen Park in Norway, the winter Hoverla and now the top of Kazbek, the best guides Sasha Pavlov and Pasha Krotyuk, and the tourist club Kluar, with which we hiked for the past few years and apparently it is the love of a lifetime 🙂 Thanks to all the guys in our international group, and now we have one cool story for everyone!

And, of course, a huge thank you to Gora for letting us in! 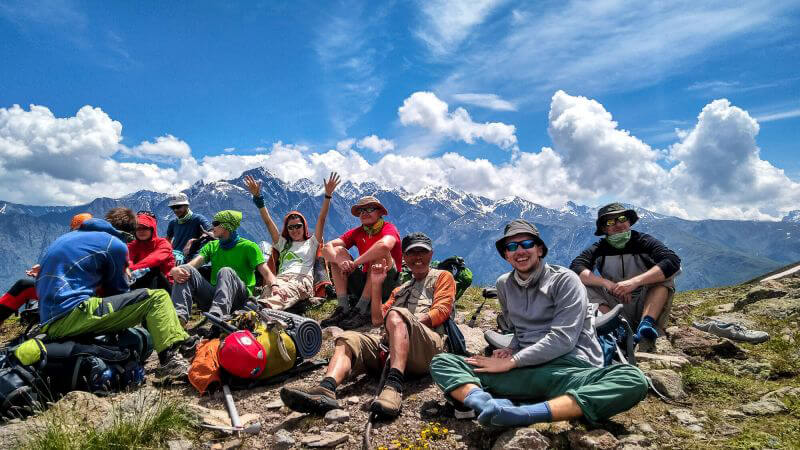 After the descent it seemed that probably with such hardcore climbs probably enough, but already now it is impossible to get rid of the obsessive thoughts of new snow peaks and I feel that the mountains are calling back...