Troll's Tongue Trek - hiking in Norway
Norway
Author: Taras Pozdnii, 26, Ukraine, Bila Tserkva
Teamleader: Taras Pozdnii
Overall rating
Teamleader rating
Manager rating
We came to Bergen by boat from Songdal. We were all those who had already hiked the Jotunheimen National Park. Half of the participants from Bergen went home, and the other half went on a new small and fascinating journey to the Troll's Tongue.

The first thing we do is check into the hostel and go eat. I have a meeting with a new group in an hour and a half, but I have to eat in time. We ordered fish soup for 10 people. It seems to take a very long time, a whole hour has already passed, and still no soup. In another 10 minutes all the group were brought out dish, probably so long cooked because the order was a group. I ate quickly and just in time to come to the hostel. All the participants are here, the first meeting, I tell you more about the upcoming trip and go for a walk in Bergen. This city is worthy of a separate story! What a cozy streets and street art! 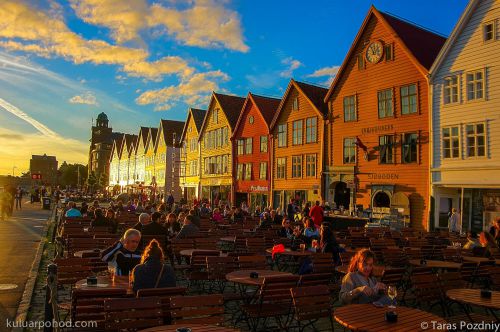 For dinner, too, we make fish soup – I buy the products (red fish, mushrooms, peppers, tomatoes, potatoes, cheese, lemon…), all together help in cooking. It’s not as good as in the cafeteria, but it’s delicious, too! 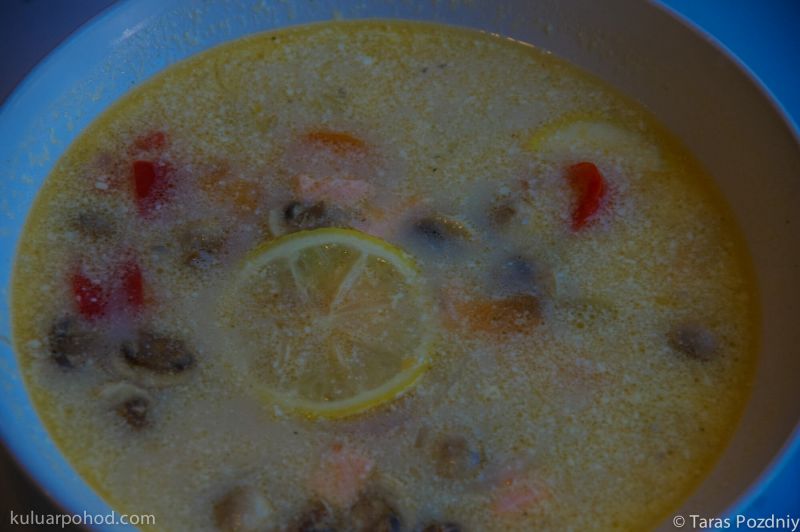 In the morning we take the bus to Odda. A couple of hours drive, a ferry ride and we’re there – a small cozy clearing in the woods will serve as our shelter for tonight. We set up camp, I go to buy some food, and the participants go to study Odd.

With myself in Norway I took a spinning rod and a small set of baits – just for this day! Expecting trout and cod, I go to a familiar place, hook a spinning rod and cast. A couple of throws and I got a hit – small (0,5 kg) cod on the shore. Catch a smaller bobber and tossed in the stream – at once begins to hit a trout. Catching a couple and it’s time to go cook dinner. In less than an hour, 2 trout and 2 cod, a few catches and bites – I’m satisfied. 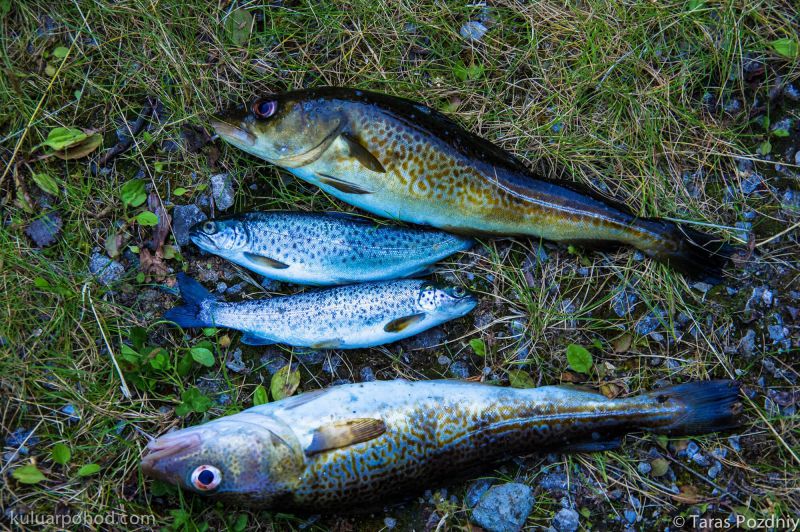 It turns out we still have fishermen in our group! I let Slava catch and he brings another couple of pieces of cod to the camp. We already have borscht in the evening, so we put off cooking fish until the morning. 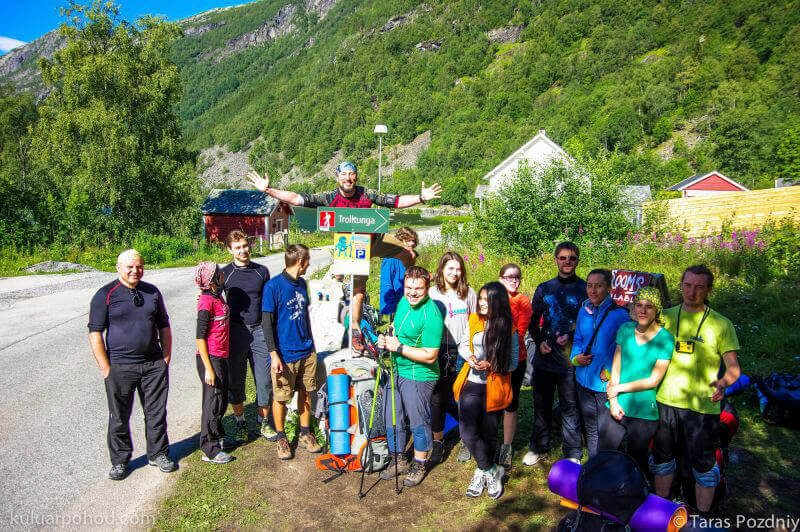 We’re eating tight – today is the hardest day of our trip to Troll’s Tongue, we have to gain about 1000m altitude. About 300 of them on asphalt, the rest on a steep trail uphill. It’s quite a hard climb, so we are going slowly. The weather is fine – variable cloudiness, breeze, nothing falls from the sky. But now the main climb is behind us, and the very beautiful Ringedalsvatnet lake opens up to our eyes. 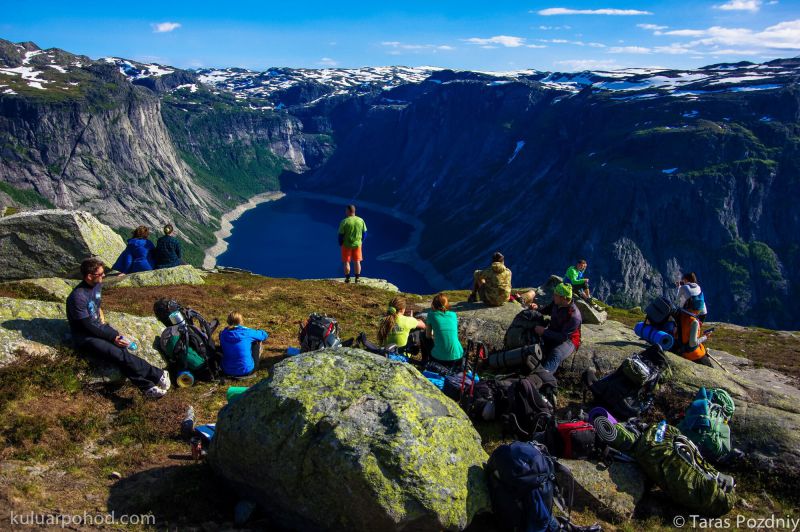 It is above the famous Trolltunga ledge, or, simply, Troll’s Tongue.

The road along the lake is very beautiful and easy. But it took a lot of energy to climb up, so it was hard to walk. We feed ourselves with nourishing lunch, then with nuts, then with chocolate – it restores our energy and helps. 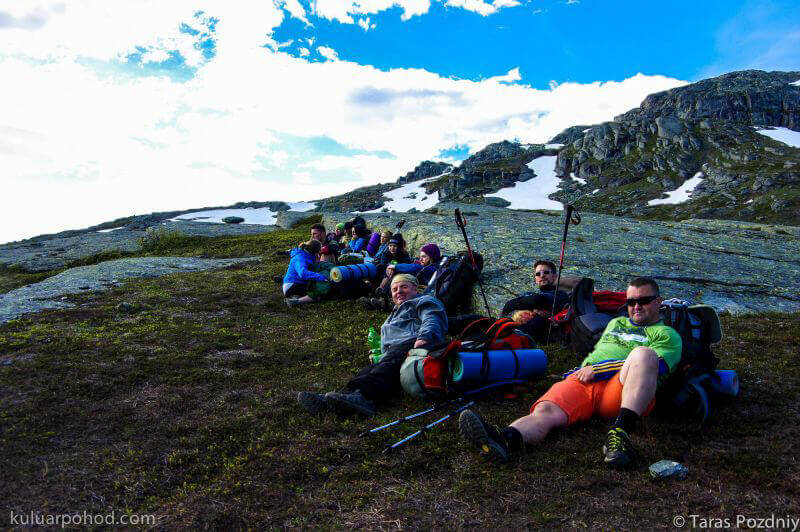 But here comes the long-awaited sign that says there is ZERO km left to Tongue! Yay, we made it! There is still a line at Tongue, but we don’t really care, we’ll wait. 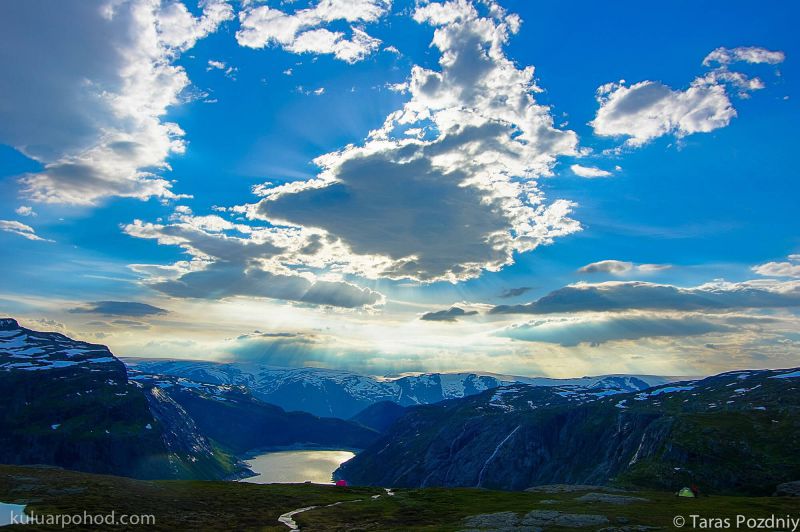 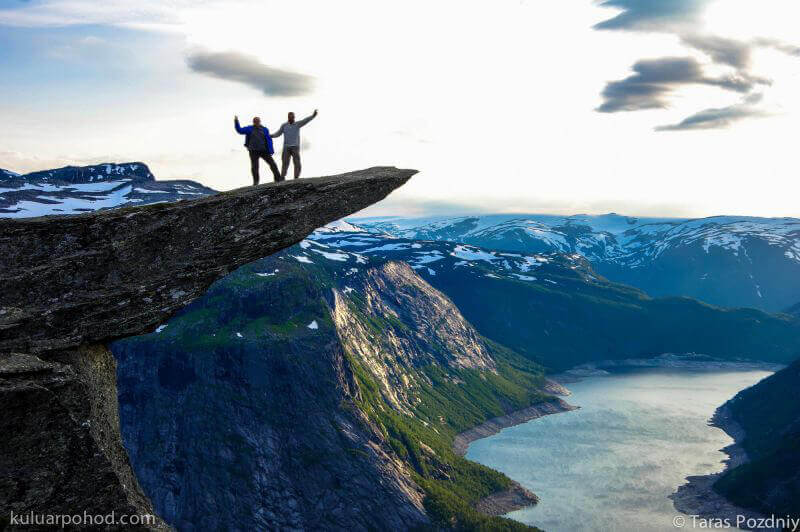 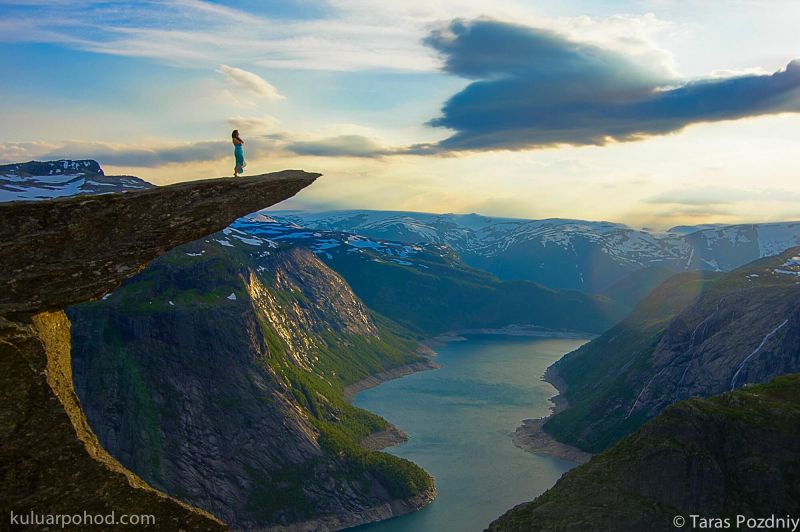 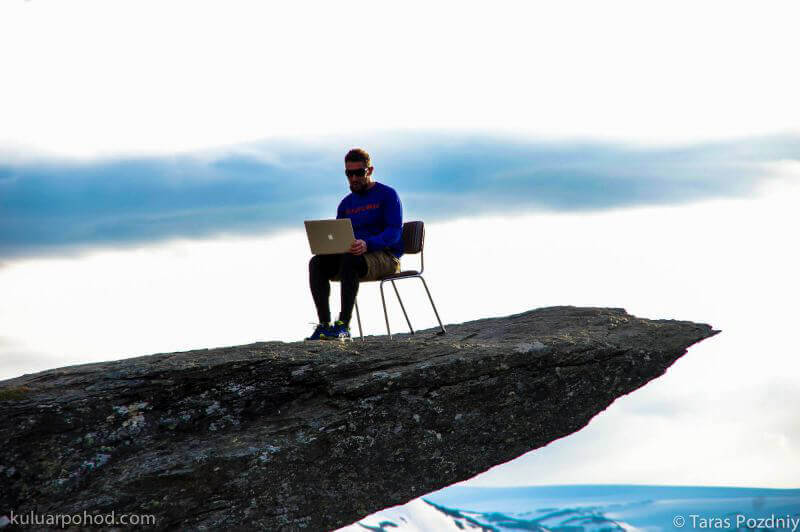 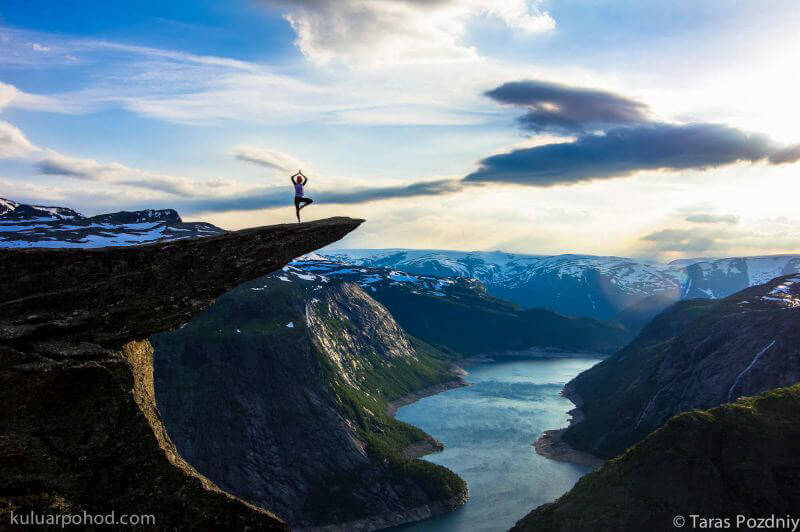 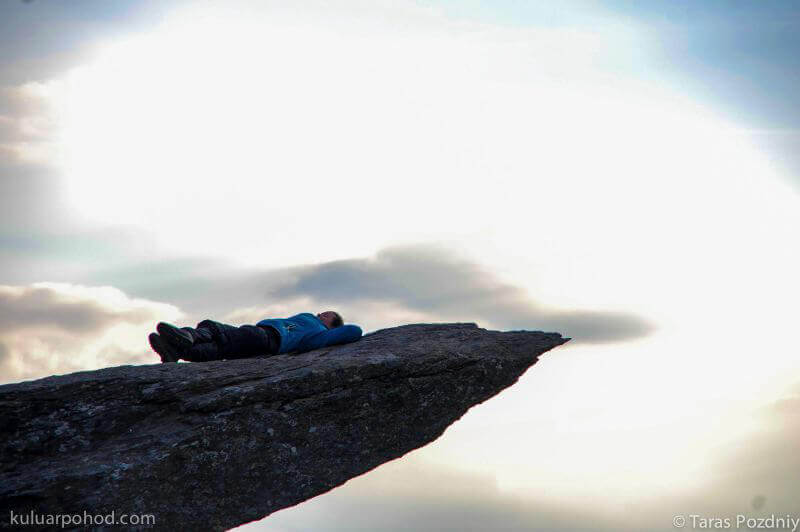 Only it is difficult to take pictures at sunset – it turns out against the sun. But very beautiful)))

To the Troll’s Tongue we went to take pictures several times more – and after dinner and after breakfast.

At night the wind does not let us sleep. In the morning, it is drizzling rain, which together with the wind accompanies us half way. Norway as it is. Because some of the participants have already decided that it is mostly sunny here). 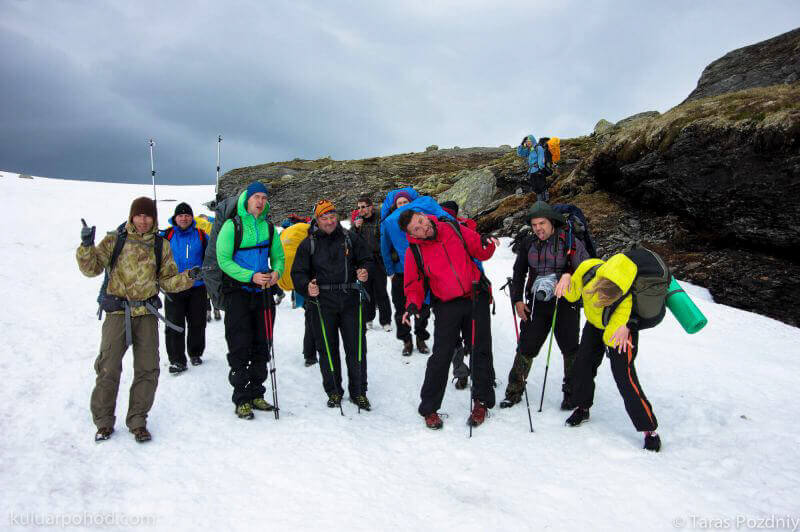 For lunch, we arrive at a very well-maintained hut. I can’t stop marveling – a hut among the mountains, lots of food with price tags, cleanliness like I never see at home. Is something like this real here?

In honor of such a lunch shelter, we make tea, buy Nutella in tubes. We eat, pay up, clean up, and move on. Today’s part of the journey is extremely beautiful, all the way we are accompanied by a truly Norwegian landscape – this is the part of the route that most “charges” me.

I almost forgot, not far from Trolltunga there is another rock – Preikestulen, not the famous one. There are almost no tourists here, and the views are even more beautiful than from Tongue!

There is a lot of snow, but this is even a good thing – you can cut through the snowpack what you would have to bypass. True, there are also disadvantages – often on steep climbs you have to hit the steps, and the snow is caked. I’m the only one with boots stiff enough, so I always hit them myself. The load on my feet is felt, but it’s great – an extra workout is never unnecessary)) 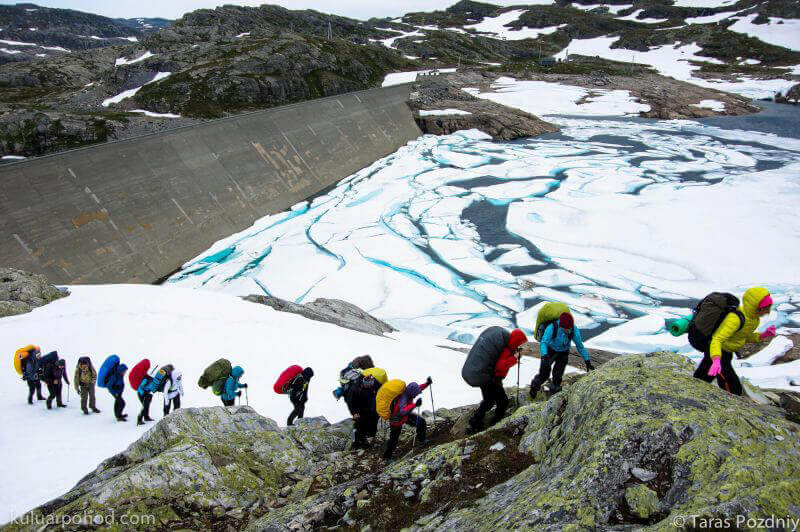 Soon we descend and come to the finish line to the Masdalsbuen lodge, which is where we’ll spend the night tonight. There’s already a Norwegian with his granddaughter in the lodge, so we talk to him. Almost the whole group is spending the night at the lodge. And only me, Dima, Masha and Niso spend the night in a tent – the last night in the mountains in Norway this season, I want to sleep in a tent to the tune of dripping rain.

Our little trip comes to an end. Only three days in the mountains, but very intense and interesting. We go down, where not without adventures we take a bus and get to Bergen. Here awaits us a cozy hostel and a hot shower.

The boots, which served me faithfully for two years, I left near the beginning of the trail to Tongue. I think this is a good place for them. They have been on Mount Elbrus and under Kazbek, in Nepal and Iceland – let them rest in the Norwegian world. 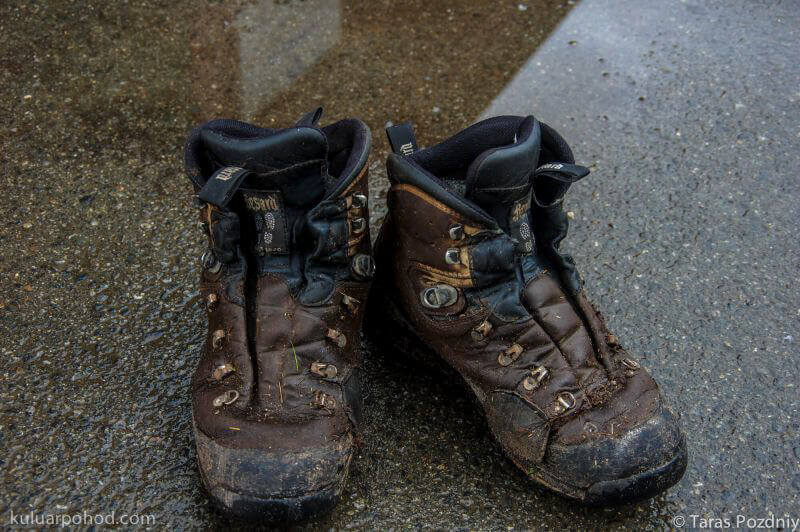 The trail to Troll’s Tongue is not the easiest, but for those with some free time and a desire to sit on this famous ledge and experience the true Norwegian, I highly recommend it!