The first acquaintance with the Himalayas - trekking to the ABC Trekking to Annapurna base camp - trek to Annapurna
Nepal
Author: Alexey Alexeyev, 32; Yulia Fok, 32 , Ukraine, Kharkov
Teamleader: Sergii Novikov
Overall rating
Teamleader rating
Manager rating
I think there is no person who loves mountains and trekking and would not like to visit the Himalayas. Therefore, when my husband came across a trekking program in Nepal from Kuluar, which also exactly coincided with the May holidays (and hence less vacation days to take a vacation) - the question of "go or not" especially was not.

We already had hiking experience – and harsh New Year Carpathians – with -27 on top of Hoverla, and treacherous April Carpathians – when we had to get out of the route on the first day, and all because we underestimated light rain, which has not stopped all day, and summer Norway – with its green meadows and blue fjords, and Iceland with its Martian landscapes, but in such high mountains my husband and I for the first time, so we chose the easiest in our opinion trek – to the base camp Annapurna – measured program with a gradual ascent, well as a chance to look at the Nepalese “giants” Dhualagiri, Annapurna, Machapuchare etc. even from afar. 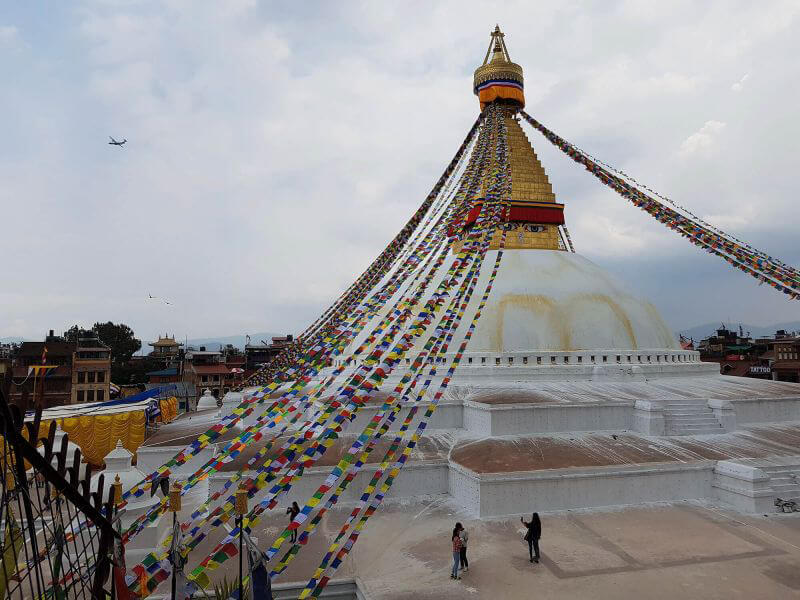 We started preparing for the trip about six months in advance. The first thing we did was buy plane tickets. It was relatively inexpensive, but it was hard to call the flight comfortable. We flew from Kiev through Sharjah. Our transfer there took eight hours and back nine. The airport is not intended for long waits – more like a suburban train station, when the seats are hard and uncomfortable, the hall is crowded and in constant motion, and constantly someone comes into the hall and loudly 5-10 times shouts the name of a particular destination, and thus leads to the “anthill” in motion. Add to this the night docking time, the time from 01-00 to 04-00 seems like an eternity, and is very draining your strength. But a little handy trick: experienced campers nearby rested comfortably on the floor against the wall in their sleeping bags, hand-picked in advance. Conclusion – do not hesitate to take with you something to lie on. 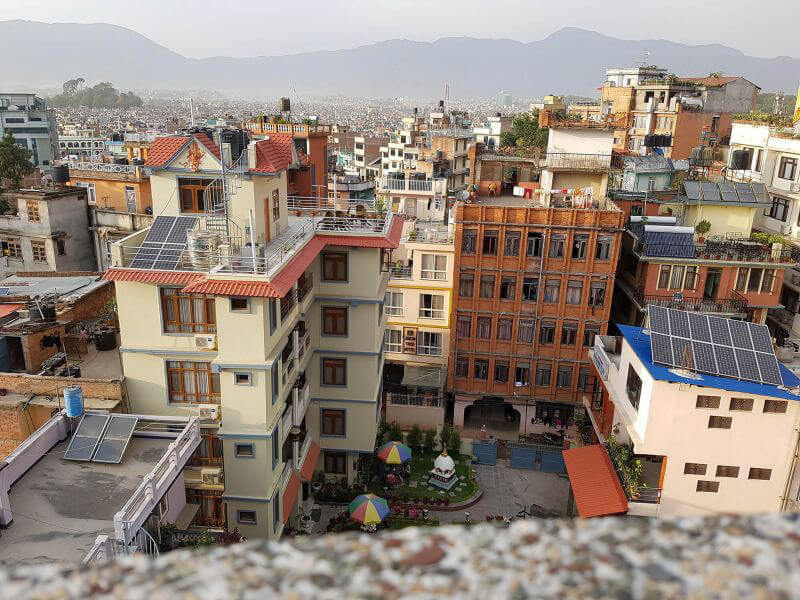 It was no problem to collect the necessary equipment for the trek – the organizers provided a comprehensive list of everything we needed. For us the most important items were a backpack, a membrane jacket, boots and trekking poles, which helped a lot.

In general they say that the campaign – is the ability to use unnecessary things taken instead of the necessary forgotten, but if this is not about you – do not worry – in Kathmandu you can buy everything, especially liked The North Face from $ 3.00)))))) about copyright compliance in this country are not particularly steamy, but a simple trekking such equipment sure will hold, well, there is always a chance to “break / torn” before the hike, as with any cheap replica.

And so the adventure began.

We flew a long time, but when we arrived in Kathmandu, had a little to sort out with the filling data for the visa through the terminal – the instructions on how to do it received from the organizers of the e-mail, but did not consider the glitches interface, windows which overlapped each other, and not allowed to press the sacred button “ok” made nervous, but in fact, the border guard or whatever he is called, not steamed when taking from you $ 25 that you have a name listed in the column Name, and vice versa.

And so happy with our seals we left the airport, where we were already greeted by Kuluar guide Sergei and a crowd of monkeys, which ran parallel to us in the parking lot. All the travel fatigue was gone. 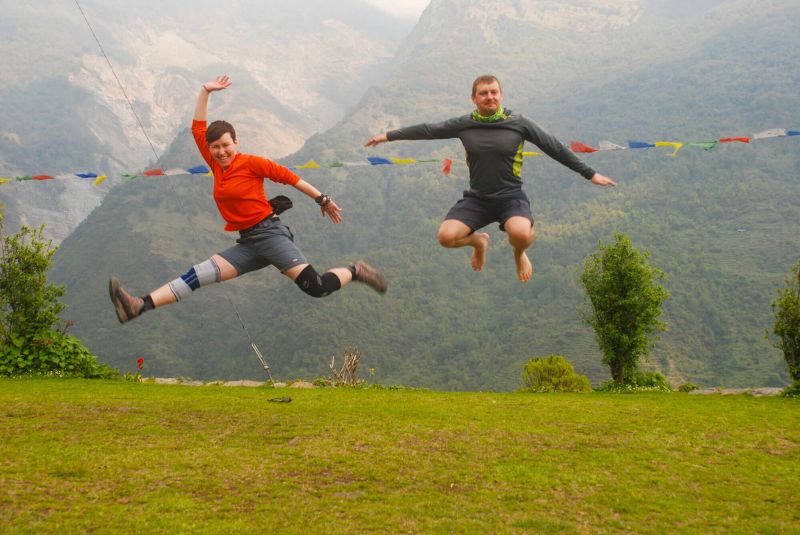 As promised, we checked in, exchanged money at a good exchange rate (thanks again to Sergei), ate and went for a walk around town. Talking about the culture of money in Nepal – there is none, for example, we were brought money, just punched through with a stapler for easy counting, some of the bills were several times taped, well, that the halves of the same denomination.

I can divide my impression of Nepal into two parts, the Himalayas being the most beautiful thing I’ve ever seen in my life and Kathmandu being the worst. I have not been to Asian countries before, so the way people and animals live in and around Kathmandu shocked me – garbage everywhere, pollution, overcrowding, etc.

But it is worth heeding Paulo Coelho’s “Going on a trip, you should not compare the quality of life or cleanliness. Nothing. After all, you’re not here to see who lives better, but to get to know the life of another country. Better to try to find something you can learn from these people.” 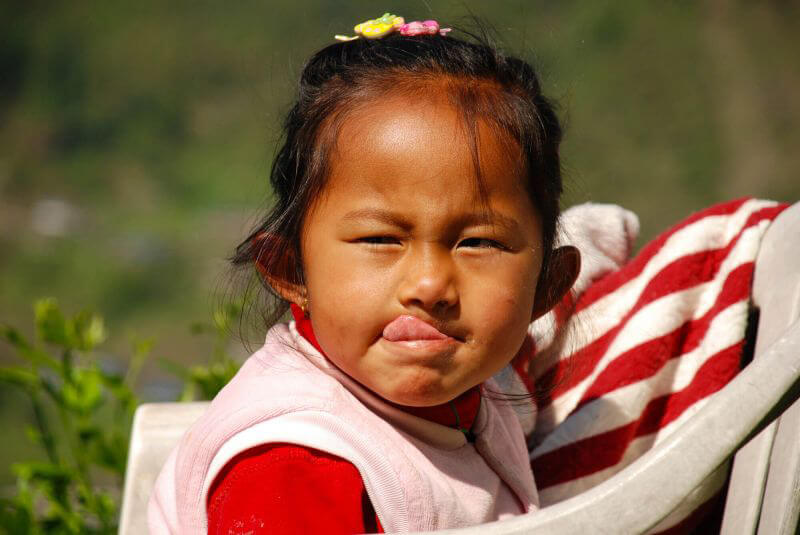 I loved the whole trek, down to the last minute and down to the last pebble. Everything – the jungle of blooming rhododendrons, the many birds singing their trills, the mountain rivers, the sunrises, and finally the mountains themselves – everything was breathtaking. Only the sight of the horses and porters dragging exorbitant weights made me sad. 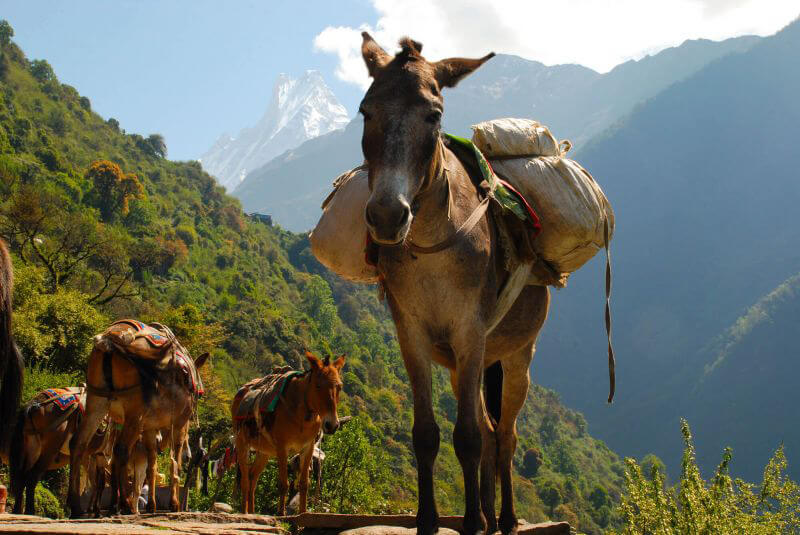 By the way, we did not take porters – so all the descents and ascents we felt to the full. And that’s where our trekking poles helped us out. To help you and yours – do not buy them in Kathmandu for cheap, in our group, some copies for 1-2 dollars, fell apart at the time of the command: “if you have trekking poles – it’s time to use them.

Overall, I would call the trekking comfortable. All overnight stays in the trek were in log cabins, comfortable by trekking standards. It was always possible to have a hearty meal, even in the highest loggia the choice of dishes was big, to take a warm shower and to sleep on a bed. We slept in our sleeping bags, but each loggia gave a blanket, so another tip for those who are going to walk the route to Annapurna Base Camp: take a sleeping bag liner – which would allow to use local blankets, but not as bulky and heavy as any even summer sleeping bag. 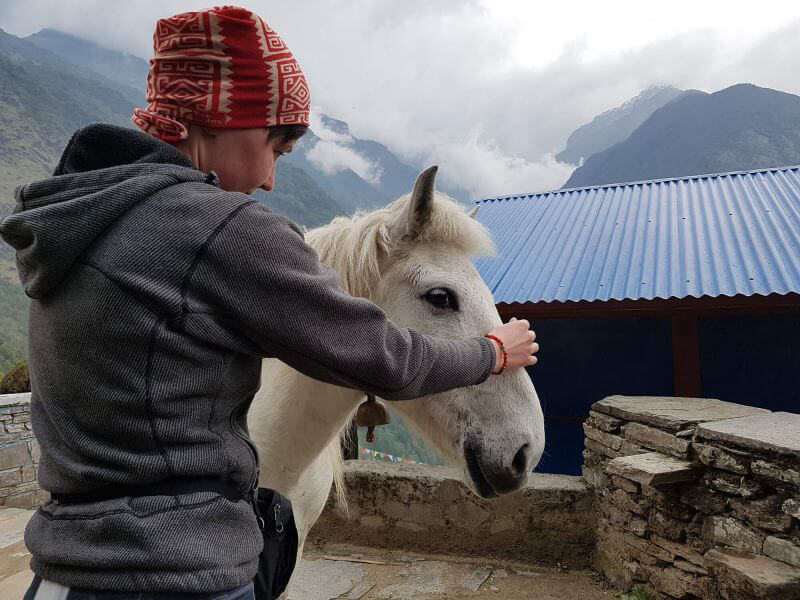 The most impressive part of the trek (though I repeat: I was completely delighted during the whole trip) was Annapurna base camp. We climbed there at dawn, the climb was easier than I feared, but the views were a hundred times cooler than I expected. I think I can safely say that in our group there was not a single person who did not like what we experienced and saw in these short 9 days.

This trip had it all – sunrises, beautiful nature, interesting acquaintances, jeep/boat rides, hot springs, time to walk around the towns we stayed in, local food, cheap fruit, monkeys, dogs, horses, yaks, lizards, leeches, temples, bridges over valleys and much, much more. 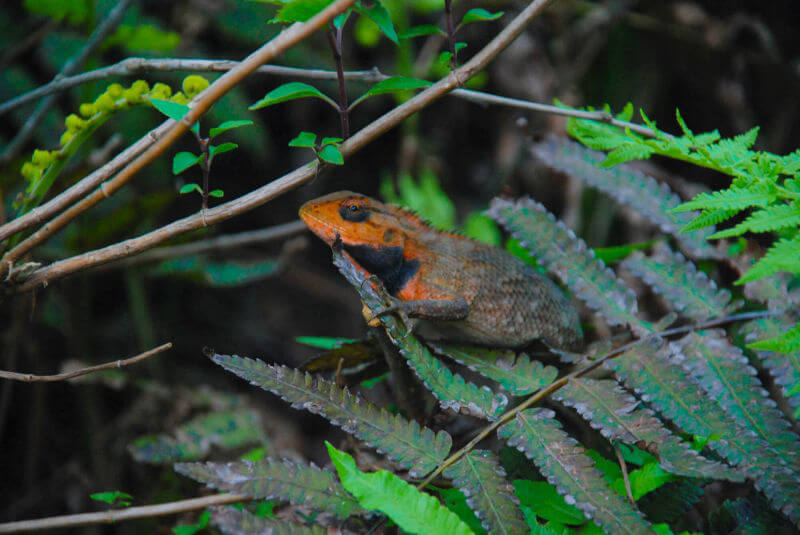 To sum up the results of the trip I can only add – we would go to Nepal more than once, and we would definitely go hiking with Kuluar once again, and we are going to do it in September with climbing Kazbek. We should be up to the present we got from Kuluar =).