Sorcerer's powers of Norway... or being enchanted to the point of first sight Troll's Tongue Trek - hiking in Norway
Norway
Author: Podorozhko Natalia, 31, Dnipro
Overall rating
Teamleader rating
Manager rating
When all the photos have finally been reviewed and selected, and the "How it was" meetings with friends have been held, it's time to take up my pen and share my impressions in the Testimonials.

About the choice of route. The Kingdom of Norway is a country in Northern Europe with an incredible nature. This is probably known to all from school geography course. Many dream of seeing with their own eyes the beauty and splendor of that nature. I myself have long wanted to visit Norway, and I have repeatedly pondered how to organize such a trip. After all, it is no secret that the country is considered one of the most expensive in Europe, and part of the tourists and it discourages. For myself, a long time ago abandoned the idea of the budget bus tour, in which it is possible to see only the main sights of major cities, and then for a very limited time. And still attracted by the mysterious and majestic nature. The decision came by itself, when last year I found myself on the website of the Couloir Club. “To see Norway as a member of a hike… Hmmm… Interesting option. Hadn’t even occurred to me before. But why not?”, I thought, and sent an application back in December to participate in the Trek to Troll’s Tongue hike in July 2016 :))  The feeling was quite unfamiliar, because I had never planned my vacation so far in advance. At first I decided to hike alone. Soon my brother joined me. And as a result of the Dnieper us gathered a whole team of 6 people :))

Preparation. Around mid-February we started looking for good value airfare, choosing and buying gear as recommended by the organizers (tent, backpacks, sleeping bags, trekking poles, trekking boots, storm jackets and pants). It is worth noting that the whole process took quite a lot of time and effort. After all, tried to buy the necessary equipment quality at more or less affordable prices. And this is not even easy :). But we generally managed to cope with this task. 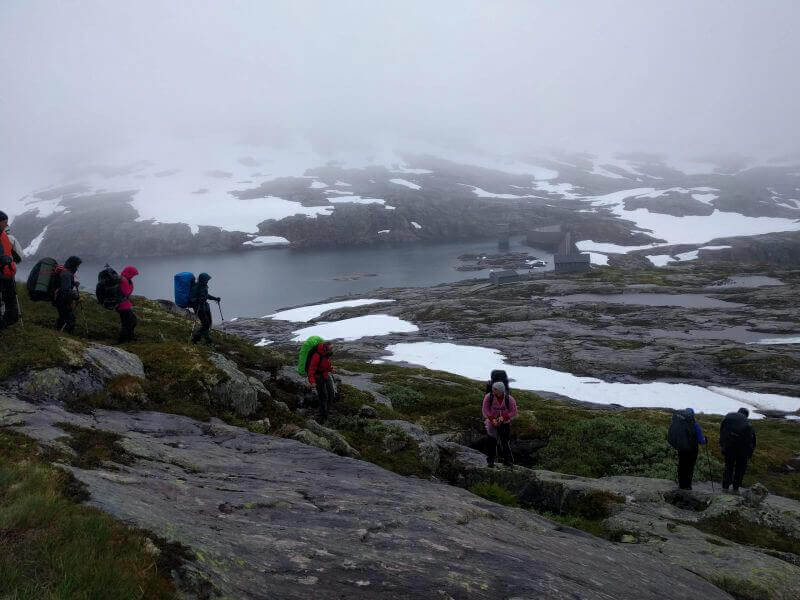 The way to the meeting point of the group. According to the program of the hike the group was planned to meet in Bergen. But we found a cheap air ticket Kiev-Riga-Oslo/Oslo-Riga-Kiev. We decided to fly to Oslo a few days earlier than planned. So we still had time to walk around the capital of Norway and its environs for a few days. By the way, very well turned out to combine these two parts of the trip. If you have time – I recommend it. But it makes sense these walks only BEFORE the hike 🙂 We got to Bergen by train. Chose a night trip, because it is noticeably cheaper than the day and saves an extra night in a hostel. But if you like to enjoy the views out the window – better to go by day trip. Bergen greeted us at 7 am with heavy rain. “Here it is, typical Norwegian weather,” it involuntarily rolled off my tongue. We put rinkovers on our backpacks, raincoats on ourselves, and went in the rain to find our hostel:)

Bergen. Getting acquainted with the group. After checking in to our rooms, we went for a walk in Bergen. We warmed up hard tourists by hiking in the rain to a local landmark – the Floyen mountain. And we went down the mountain by cable car. The rain accompanied us throughout the day, only briefly making breaks. We noticed a peculiarity of the local rains: it stops abruptly and then all of a sudden begins with a new strength. So often put on and take off the raincoat I’ve never had before :)) By evening our full group had gathered at the hostel. We got acquainted. Instructors Vasya and Dima told us the whole itinerary, checked and distributed group food. And we were still till midnight repacking our backpacks, because at 8:20 am departure from Bergen was announced. 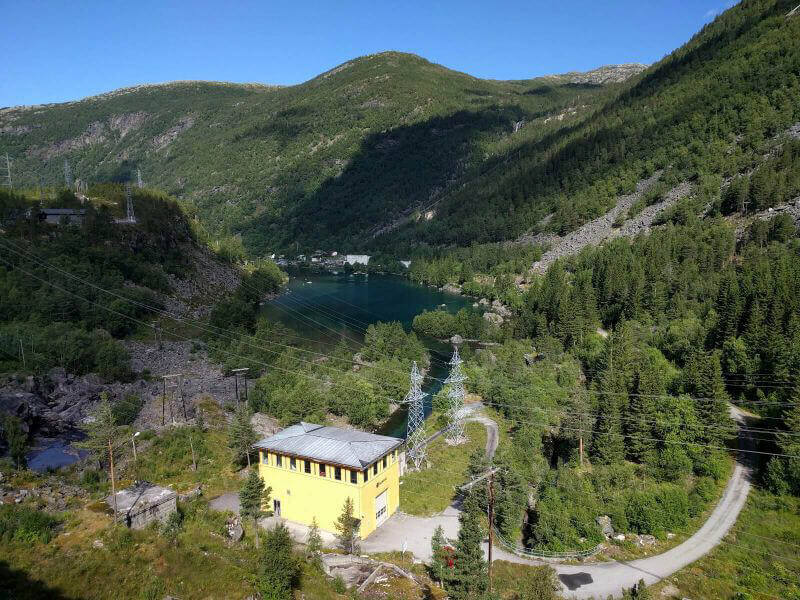 Impressions from the route. The route is bright and saturated, though not long. Mysterious and at times severe beauty of northern nature is revealed with every kilometer, with every climb and following descent. Trees and bushes meet less and less often, being replaced by mosses and lichens on stones. The true queen of the local nature is undoubtedly Water… Water accompanies everywhere. It has many faces, it’s luxurious and majestic. It comes in the form of tiny streams and springs, turbulent mountain rivers and splendid waterfalls. Glacial lakes of unreal piercing blue color and dazzling white snowflakes on the slopes. Sea water of picturesque fjords, stretching many kilometers into the land. And, of course, Water in the form of numerous fogs and rainfalls 🙂

Troll Tongue. What is Troll Tongue itself? And is the “game worth the candle”? – Yes, going the route is worthwhile! And there are at least a few reasons. 1) The view of the lake is breathtaking. You have to see it with your own eyes! Beautiful words and photos, even the best quality emotions of the presence is impossible to convey. Besides it is very cool to realize, how recently you looked through the Internet photos made on the Pagan… and now you yourself are the hero of the same unbelievable pictures. But that’s not all… 2) A unique photo shoot at sunset. For most people, which are like pilgrims walking along the trail in 11 km to the Pagan, you have to quickly have time to make their mega-pictures and on the same day to make a march back 11 km. We, on the other hand, had the advantage of staying here overnight! We arrived at a comfortable pace, set up camp, had dinner… And then we went to hold our enchanting photo-sessions on the Troll’s Tongue, bathed in the rays of the northern sun that never set. This is the time of polar day at high latitudes – when the sun hangs over the horizon for a long time. It’s a good time to travel around Norway. You can sit like this and contemplate for hours the insane beauty of a glacial lake with steep banks, illuminated by soft light. 3) A dream morning. The perfect morning… As imaginable. Getting out of the tent at 5 am, breathing in the clearest cool air and seeing this mesmerizing view… “shivers” down my body even from memories. It was worth the effort to go just for the sake of it. But, as it turned out, that wasn’t all the “wow effect” of this morning. 4) Breakfast on the Troll’s Tongue. Unexpectedly…at 6:00 we already had a hot breakfast waiting for us at Troll’s Tongue itself! It was really cool! Yesterday I was still trembling in my knees, stepping on this rock, and today we are sitting, as if nothing had happened, having breakfast:)) Unforgettable. 5) Morning photo shoot on Troll’s Tongue. Photo session. Part 2 – for those who were brave enough to sit on the edge of the rock / not tired to pose for the cameras / did not have time from the evening (unlikely, but still) – had the opportunity to add the morning photos to the photo collection. 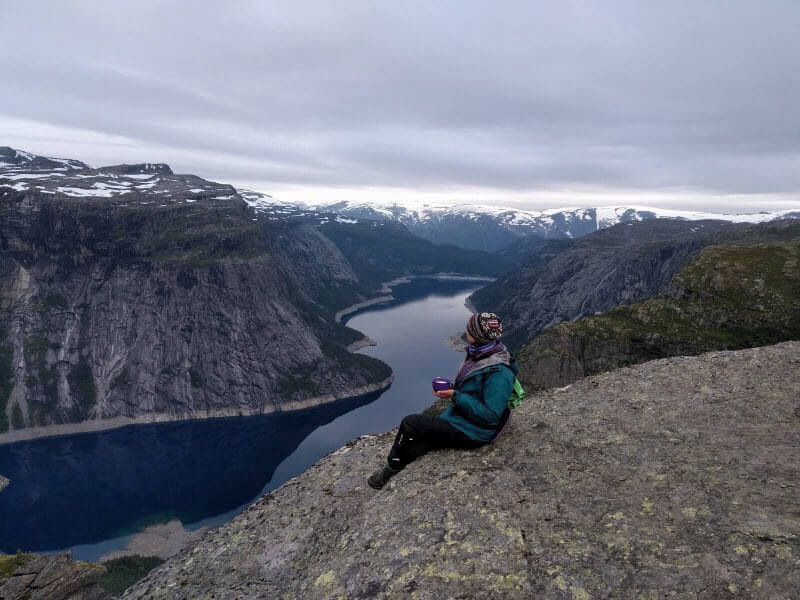 The trek around the lake. I would call this trek a journey through the realm of rocks 🙂 There are countless rocks and pebbles here. They are everywhere. Any size you want, from rocks and their fragments to small pebbles. Rounded and sharp, smooth and slippery, rough and lichen-covered. We spent the whole day walking, jumping, climbing and contemplating this stone diversity 🙂 We also had to walk in the snow and cross small rivers. In addition to this, the first half of the day we were generously sprinkled with rain. Under such conditions, you understand the importance of appropriate clothing and footwear. If you’re comfortable with your outfit, it’s pretty comfortable to walk. This does not mean that the walk was easy and relaxed. It was difficult, and in some places it was very difficult. But if you abstract away from the inner feeling of “suffering” or the drilling thought of “how much longer until the parking lot” … to walk with a sense of internal smile and even to some extent happiness, you must agree, is much more pleasant. I, for example, managed to do it 🙂 Sincerely and I wish it to everyone! As a result of this trip, my fascination with this country, which emerged at a distance, before the first sight, has only strengthened after getting acquainted with Norway. 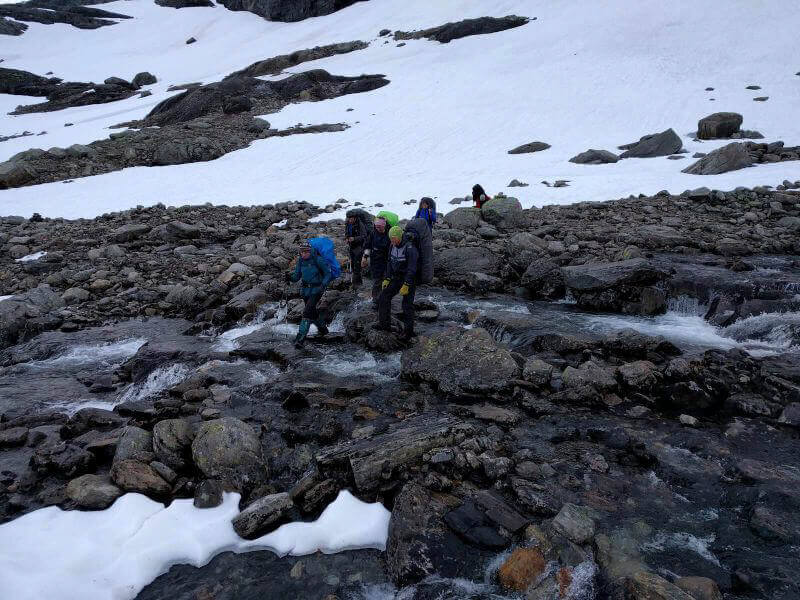 In lieu of a conclusion: People, take a camping trip! This is a unique opportunity to get to know the country from the other side, from the inside, for real. Get to know each other better, feel the character. Through every breath of clear mountain air and every sip of invigorating spring water. Through every picturesque scenery you see with your own eyes. Every kilometer traversed with own feet. Let the hiking at least once in your life 🙂