Everyone arrives at different times. We buy souvenirs with the group from ABC (the last trek). By 1:00 am everyone is there – the new group is ready to go.

Early rise, departure at 5 a.m., and at 6 a.m. we have a plane. In the morning there is a big fog and the airport is closed, so we wait. By 10 o’clock there is a commotion, we are the first to arrive to our plane. We hear Russian, get acquainted – it turns out that these are Ukrainians who have lived in Australia for 23 years. We listen to them telling enthusiastic stories about this wonderful country. We board the 15 seats plane and take off. In 25 minutes of flight we pass forested slopes and Nepalese villages, and in the distance peaks of white clouds. Ah, here comes Lukla. The landing strip is only 500 meters long, the plane brakes sharply and stops a few meters away from the wall. This is probably the most beautiful and memorable flight of my life. We find our porter, settle the financial issues and leave for Phading. We met a lot of painted rocks, the kind you can’t find on the Annapurna trek. The girls enthusiastically take pictures of everything around. We have a good company.

It turned out to be a blurry day. In the morning we did Tamara’s exercise program, I was getting ready, and the girls asked us to go ahead and look at the stores. Tamara ended up running ahead on the route and we didn’t realize it. Half a day was spent searching, although there was nowhere to get lost – 3 logjams and one trail. In the end, everyone was on their feet and she was found. On the third checkpoint, the first two she successfully avoided. How? But found it and great) In the evening we have dinner with wrestling and an Indian movie. Which is crazier – hard to tell. For me, the movie. There are a lot of yaks and donkeys on the trail – more than tourists. No, not yaks. It’s not a real yak down here – it’s a djobki, with much less long hair. 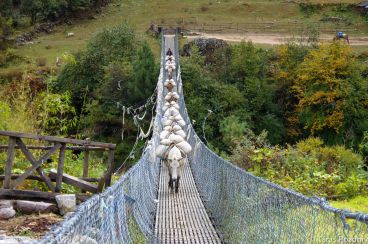 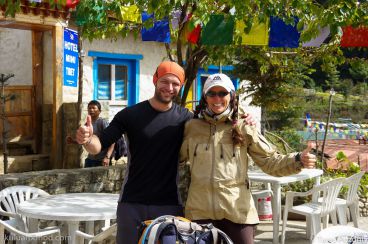 Also at lunch we met Pamela, an American who was on the summit of Everest three years ago, and now has descended from Ama Dablan. She is almost done with the 7 summits, only Australia is left. Once again I am convinced that it is necessary to learn English well to be able to communicate freely with such people. After all, so many interesting stories pass by because of the language barrier.

Today we saw Everest for the first time. About halfway to Namche Bazaar on the trail I met a Russian speaking guy, he asked me where I was from. I told him I was from Ukraine, to which he happily replied, “Oh, brothers!” And he turned out to be from Russia. It’s nice to know that politics doesn’t apply to everyone. 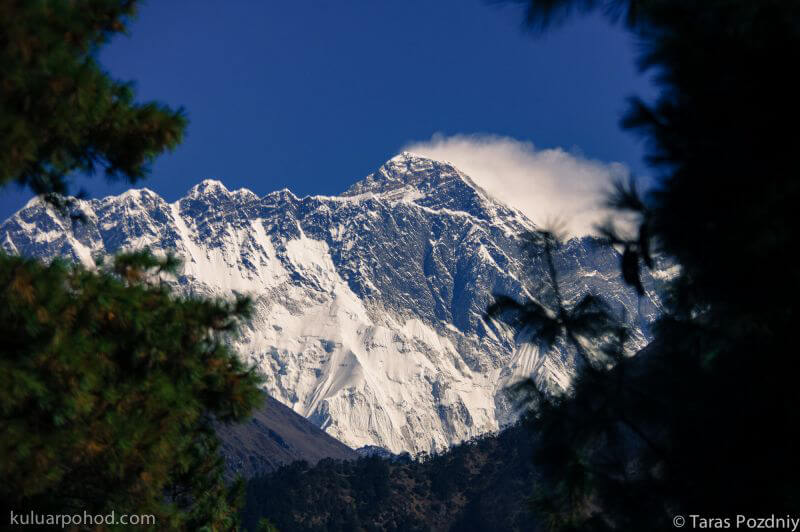 One of the porters was asked about the weight of his bale, and it turned out to be 95 kg, even though he himself weighs 45. It was hard to believe. I tried it, almost broke everything and decided to stop there. And so with two backpacks was a lot like a Porter. Only the color of my skin gave me away. =))

We spent the night in a lodge, the owner called himself a friend of Messner. Last year the legend even went to his place for dinner, during the filming of a program. On the bar counter hangs Messner’s photo and his autograph.

For acclimatization we went up higher and took a picture of Namche time-lapse. In the evening we went to take pictures of the stars, it was very beautiful around, unfortunately, the fog came down and we couldn’t take the time-lapse, but we got a couple of funny photos. 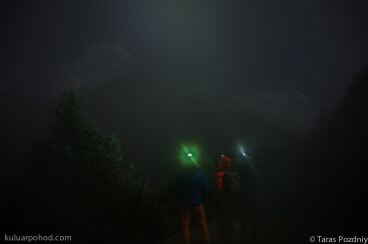 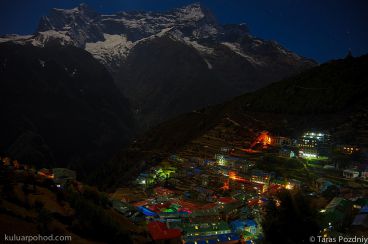 The whole day we are accompanied by unique landscapes of the snowy peaks of the Himalayan mountains. Undoubtedly, Ama Dablan is the most beautiful. At four o’clock we arrive in Tyangboche and go to see the local monastery. Interesting, but nothing remarkable. In the evening, as always, the fog comes down. We are sad, the scenery around us should be ethereal. But after dinner, the fog dissipates, and the bright moon illuminates the mountains – very beautiful. It’s a pity there are not many stars because of the moon, we have to get up in the middle of the night. Overnight altitude is 3860 m. 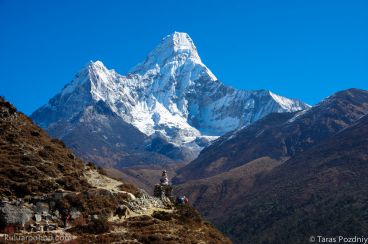 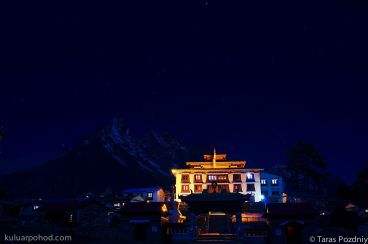 I slept all the night and I didn’t go to shoot of stars – it was very cold, I didn’t want to get out of the sleeping bag. On the way we always admired the views of Ama Dablan, Lhotse and, a little bit, Everest. In Dingboche we arrive at four and go to take some tests (we take part in the research, conducted by American scientists). It gets very cold at night, Ama Dablan rises in front of us. The overnight altitude is 4400. 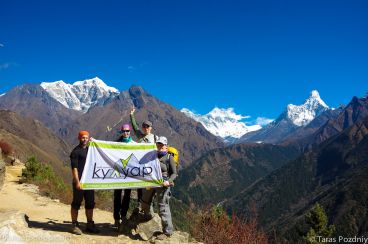 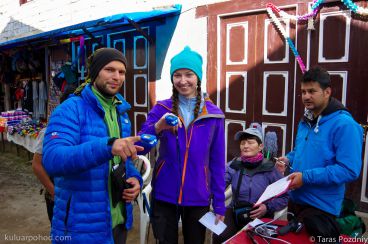 The morning brought great views of Ama Dablan, Lhodze, Island Peak, Tamserka and other peaks. The first half of the day was great, we were climbing 200m without noticing it. At 4470 I did a somersault, my highest summit at the moment. And in the afternoon we have to climb steeply up to Dugla Pass at 4830m. The girls are having a hard time climbing, but then the road levels out and it’s easier to go. Some guys with cool equipment are making a film on the pass. Pumori peak is shown. After coming to Lobuche, we go to acclimatization exit to the nearest ridge. Just behind it there is a long tongue of Khumbu glacier. The height of 5000, all the participants crossed this line for the first time. We met some Russians and a bit later a man from Kiev. In the evening the food turned out to be very salted. Tomorrow we rise at 6 am, if we feel good, tomorrow we will be at EBC.

Breathing is heavy, accompanied by clouds of steam in the room. 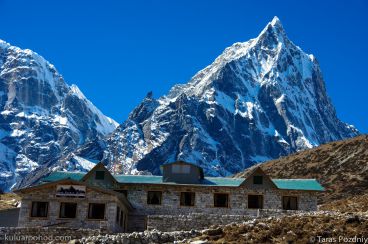 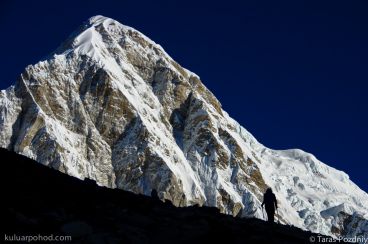 It was a hard and busy day. In the morning Tamara felt weak, but decided to try her strength. At first she went relatively well, but after 3km the situation worsened. I told her we had to go down – she had no questions or objections. I took her backpack from the porter and go back down to Lobuche, put in a room with a Ukrainian, who also did not go upstairs with his group. It will be more fun and reliable together. I return quickly to my backpack and go to Gorak Shep. My backpack became noticeably heavier. The height is 5200m. By the time I came to the village the girls and the porter had already gone to the EBC. I found the gesture where they were staying, dumped my stuff and started walking. It’s hard to walk, but the scenery around fascinates and distracts me. I can already see the base camp – I thought why should I go down there, because I can see everything much better from here. But for the sake of ticking the box I go down, Ira is already there. Natasha did not want to stampede extra and went back. She can be understood – it is hard. We come back to the guest house absolutely exhausted, my head hurts. We didn’t want to eat because of tiredness. We are exhausted with a rucksack at the altitude of 5000m. A thermos of tea helps and we feel better. Ira played cards with Asians, Natasha had a rest and I went to bed too. 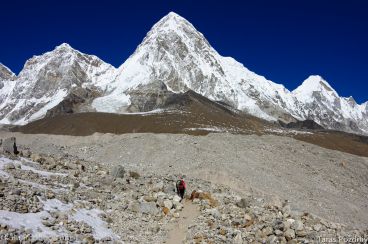 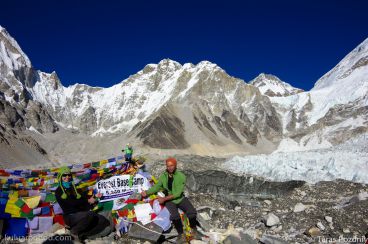 Slept very badly (5180m). Had a headache half the night, so bad I couldn’t sleep. Then it stopped, but the early hikers started wandering and making noise. Anyway, I woke up at 5:50 a.m. asleep and feeling great. Never felt better. The girls are also fine, we have breakfast and head out to Kala Pattar. It’s a long and boring ascent (except for the surrounding scenery – it’s amazing), hardly less than 2 hours, and we are on the top. GPS shows 5641 – almost Elbrus, but by the complexity is not so close (much easier). Enjoy the scenery, take pictures and go down. Today we have to drop another 800m to the next overnight stop, Ferice.

In Lobuche we took Tamara, she does not feel well. The girls went ahead, and we are slowly descending behind her. We did not have time to reach Ferice, today we spend the night in Dugla. The height of 4620 was very good. I tried to charge the acumms to my photocamera, but they have problems with electricity. Akumm almost died, I go to shoot a time-lapse, it is too beautiful around and not as cold as at 5000+. Got a little over 30 frames, too bad( 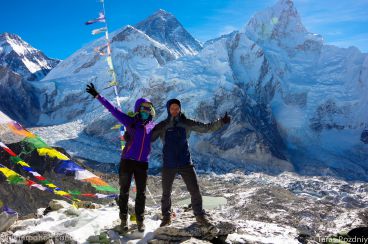 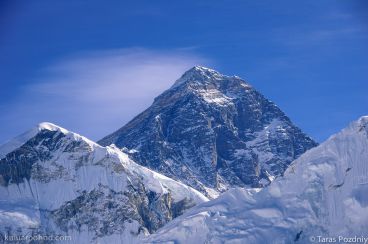 Tamara doesn’t feel better, we order a horse and take her down to the nearest medical center in Feriche. She is examined, breathing oxygen for two hours. Trying to find out something from the insurance company costs 65 bucks per satellite and is inconclusive. If you take out an insurance policy for trekking in the high mountains, make sure a helicopter evacuation is included. We continue down to Tyangboche by horseback. By evening Tamara is feeling much better.

The morning begins happily – Tamara got up first, has already washed her hair and is feeling relatively fine. But we still decide to ride the horse all the way down. Tonight we spend the night at Monjo in great rooms with hot showers – something that was sorely lacking at altitude. Finally got a chance to order a Bezdai cake and congratulate Natasha on her last birthday.

There are less and less remarkable things going on. We descended to Lukla without any problems, though it’s hard to call the last part a descent, because you have to gain more than 200m. Nevertheless, we are in Lukla. In the evening we go for a walk to the local cafes.

Today is the big day, because we have to leave from the small airport of Lukla. And we did it! The weather is good and the planes fly constantly. There is a 2 hour delay before our flight, but it’s great. In Kathmandu, we check into a familiar hotel and go for a walk. 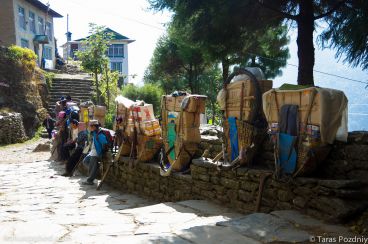 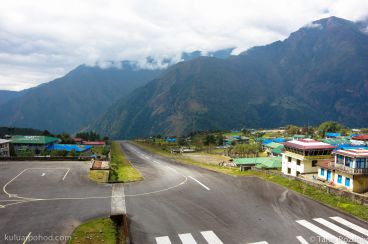 Day of excursions. Unusually many monkeys in Swayambudnath. 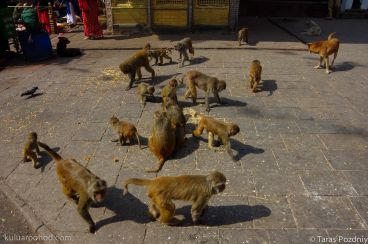 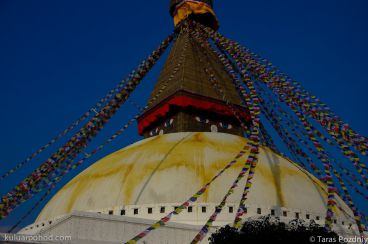 For the second time the same places no longer make the same impression, so I will not describe the sightseeing days. We also had a whole free day for shopping. Ira and Natasha went on a trip to Nepal. Natasha went to Pokhara and Chitwan, Ira to trek to Annapurna.

Tamara and I went home. At the airport we met some Ukrainian-Australians we knew. It is cool. That is all, go to Nepal, it is really cool!