Getting to know Lykia We arrived in Turkey a day ahead of the main group to look around, walk around, and buy the necessary groceries and things for the trek. After overcoming a huge line at passport control in Istanbul, we boarded our flight to Antalya. Toward nightfall we arrived in Kaleici and quickly found our hotel, the Blue Sea Garden. After the road, we drink tea, take a shower and go to bed. 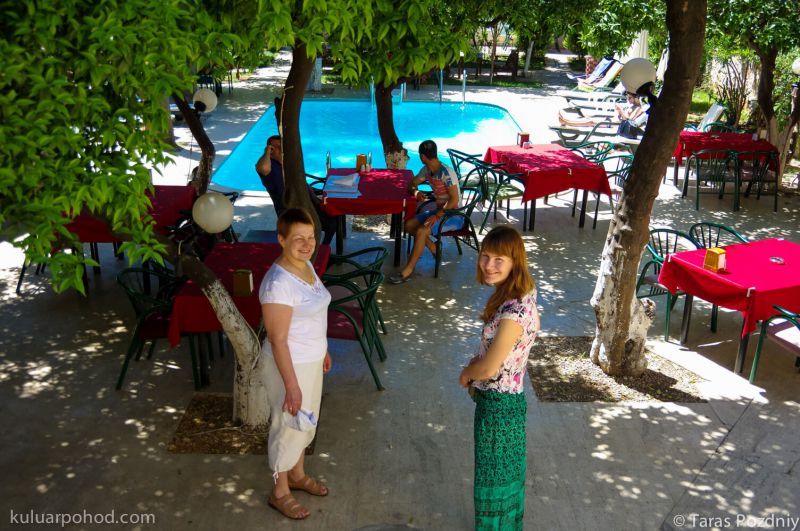 I liked Kaleici (old town) during the night walk to the hotel, it did not disappoint me either 🙂 Small cozy streets, paving stones, all sorts of antiquities found at every step. A beautiful Mediterranean coast. Reminded me of Thamel (the tourist district of Kathmandu, where we live when we start trekking in Nepal). Kaleichi and Tamel are completely different, but still they have something in common. Maybe it’s the promise of a great adventure? 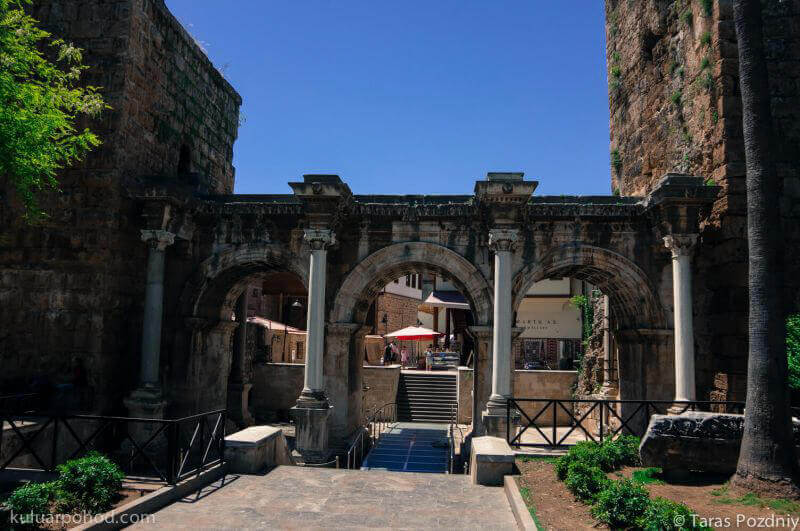 We wandered through the small streets of the old town and made our way to the beach. But we never made it to the beach. On the way we decided to visit the Museum of Antiquity. I usually do not like museums, but this one was nice. A lot of statues and other archaeological stuff was waiting for us there. We got a couple of good pictures. 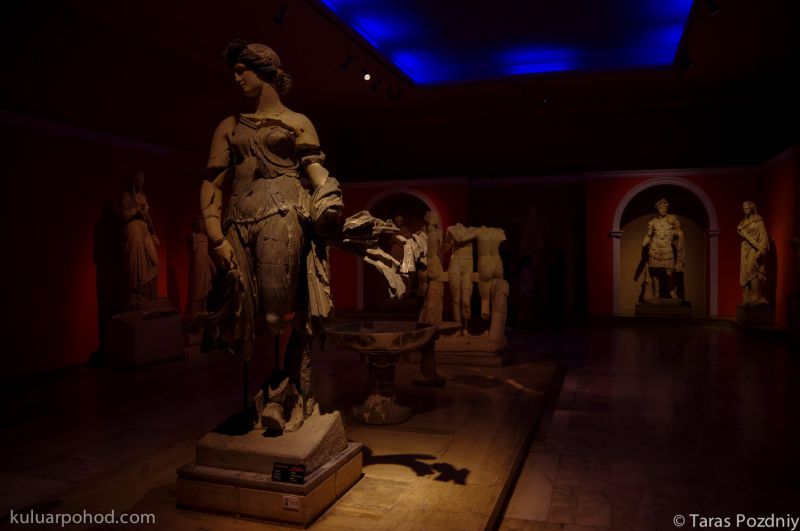 We rested and continued to wander the streets. Turkey welcomes guests very well, there is no alienation, you feel at once one of your own. Everything is in place and everything is simple. 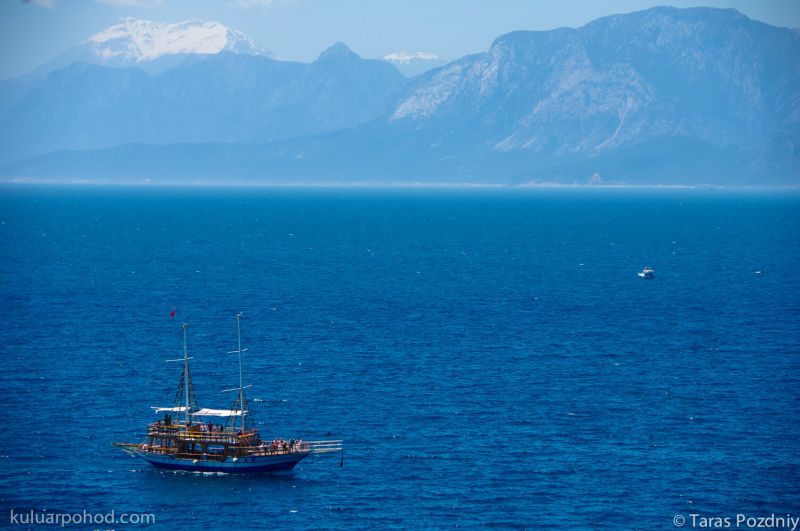 We have a great hotel, with a swimming pool and two turtles, which I feed at breakfast with cucumbers. Feeding turtles is a lot more interesting than cats. 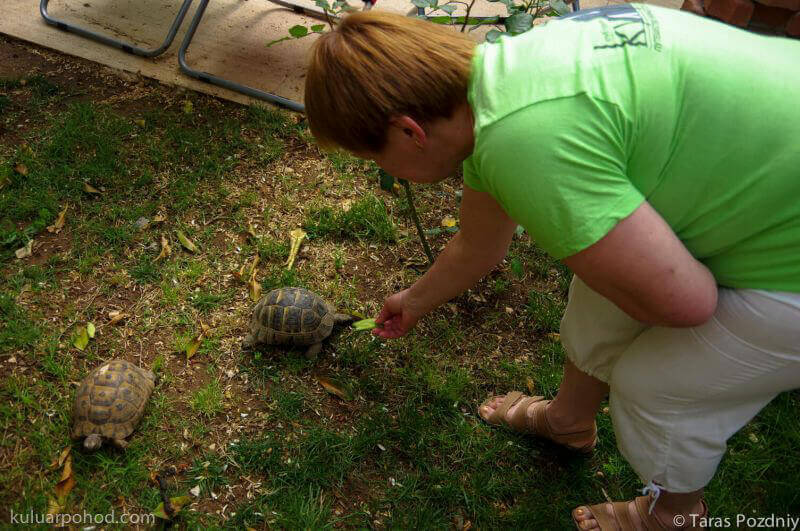 Where are you guys?

The group was all female. Six girls and me. On the one hand it’s nice, but they do not have the same load as the guys … and the portions in the layout is still the same.  Men, don’t sit at home! So many beautiful girls go hiking and there is no one to give them a backpack! That’s the cry of the soul. 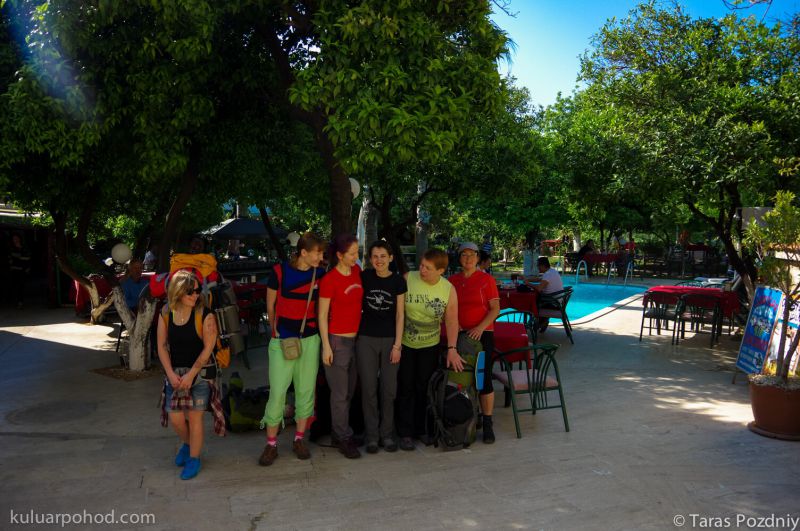 Start to the route

Morning drive to Hajnyuk. First we walk on asphalt. We enter the famous Ali’s, decorated with a lot of interesting pumpkin figures. Ali makes pumpkins in special cement molds, and they all turn out quite funny. We bargained two GEL for a glass of fresh and delicious orange juice. We also tasted medlars – sour and very tasty fruit. We went to Geyniuk canyon. Not bad, but we did not swim. It is cold. 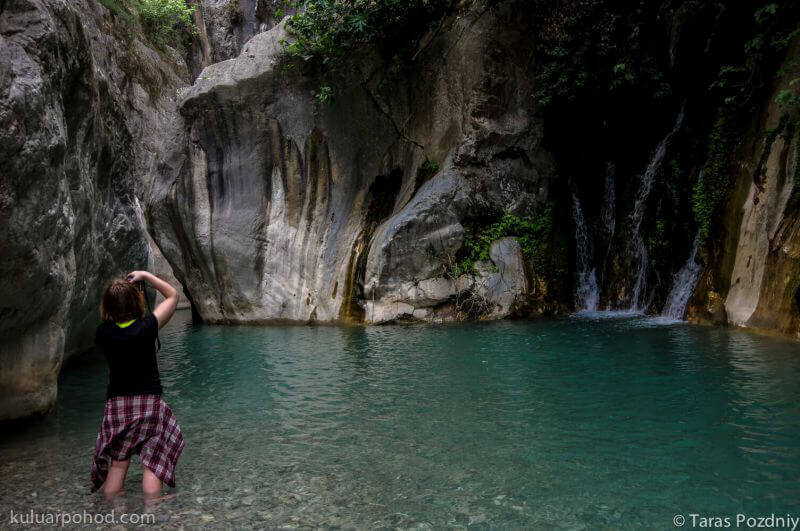 We decided not to camp overnight by the road and go up higher. As a result, about 7 p.m. we camped on the pass. A couple more Ukrainian groups were standing nearby. In general, the vast majority of groups on the trail were from Ukraine. From Russia much less. And in our group among the participants was parity – 3 on 3. From the brought water we cook dinner and a little tea. And tourists in two small groups keep walking by us. It’s night, and they’re still coming. 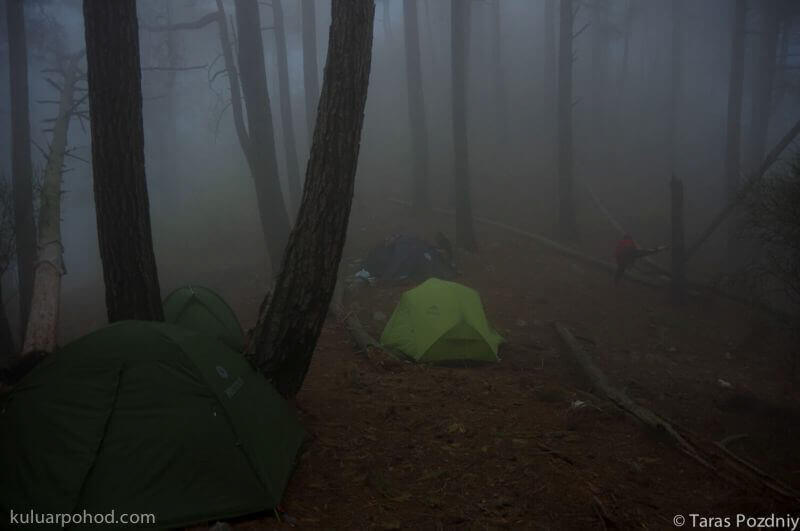 In the morning we pack up and start our descent.  About an hour from our campsite there is a small river and a nice clearing. We camp here, but not for the night, just for breakfast. 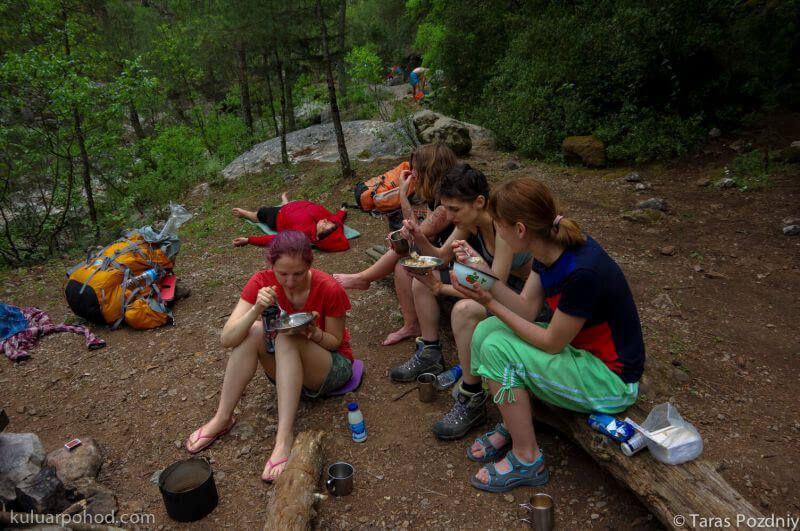 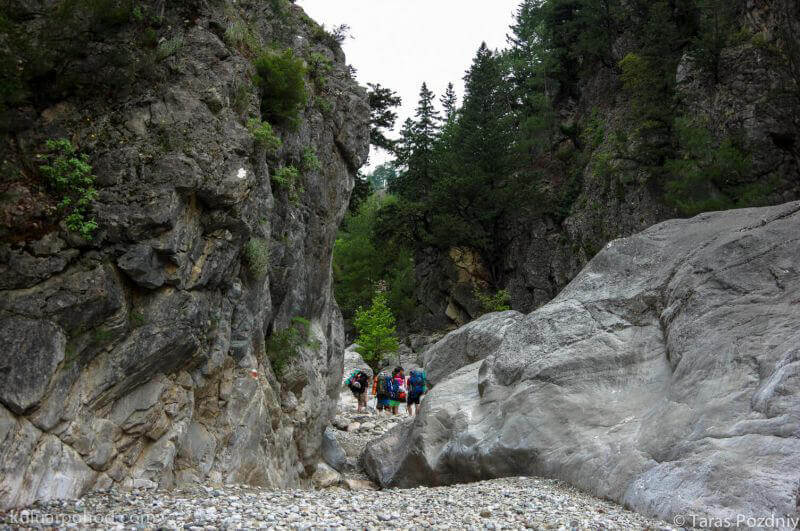 It’s beautiful, but difficult to walk. Soon our path goes sideways and starts climbing uphill. There are signs like, “Seamless camping and showers. If you’re really tired, call me.”  And a phone. Similar signs saw five pieces. Oh, these enterprising Turks! Of course, we didn’t call, and soon we arrived at the campsite ourselves. There were showers, wi-fi, and a small cafeteria. 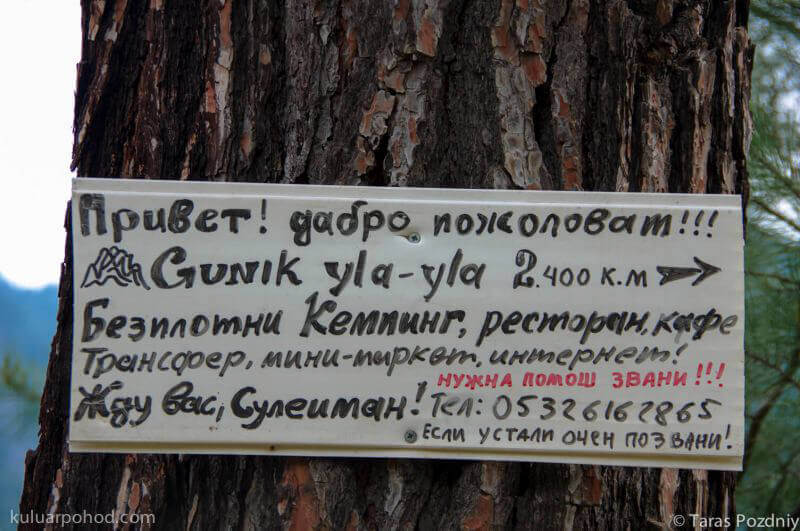 A short hike (about 10 km) and we are already having lunch in Gedelm. Here I bought an ice cream for 4 lire, which in the next store costs 1 lire. What a shame, what a shame. It happens. We ate, drank some juice and camped near the ruins of the Gedelme fortress and the over 2000 year old sycamore tree.  Sycamores I really liked – really giant and ancient trees. There are up to 10 of them here. 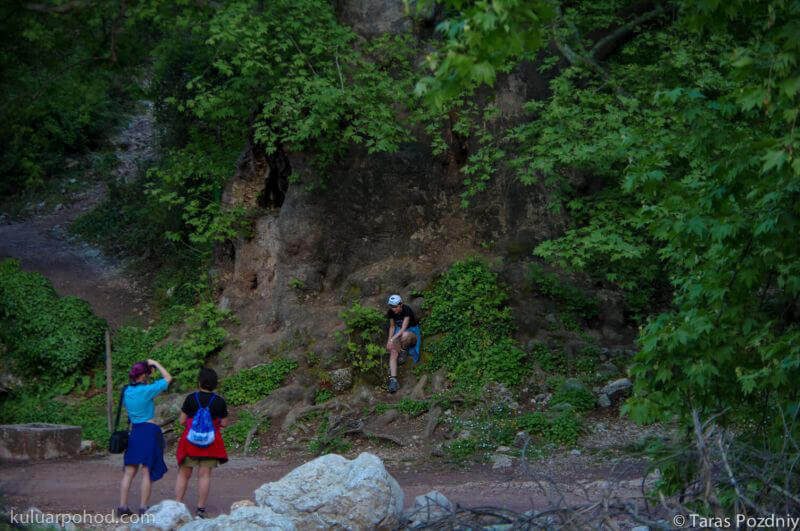 After a couple of hours, a local racket came to knock down the parking fee.  Our dialogue did not work out at first. The guy doesn’t understand anything in Russian or English, but he has a phone with an interpreter. He writes into the transliterator in Turkish, then shows it to us. And really, why learn that language? He wants to charge us five lira per tent (we have three tents), arguing that this is his grandfather’s territory and a paid campsite. We try to explain that there aren’t any facilities, and it’s not a camping site at all. I tell him that I won’t pay him more than 5 liras for everyone. After 5 minutes of trying to prove something to us, he gives up, takes the 5 liras, and leaves. But soon he comes back with his grandfather. He also knows only turkish and wants 15. A couple of minutes of useless explanation that we will not pay them anymore. We said word for word that we were from the Ukraine. To which the grandfather was happy, they said that everything is normal, we can stand. 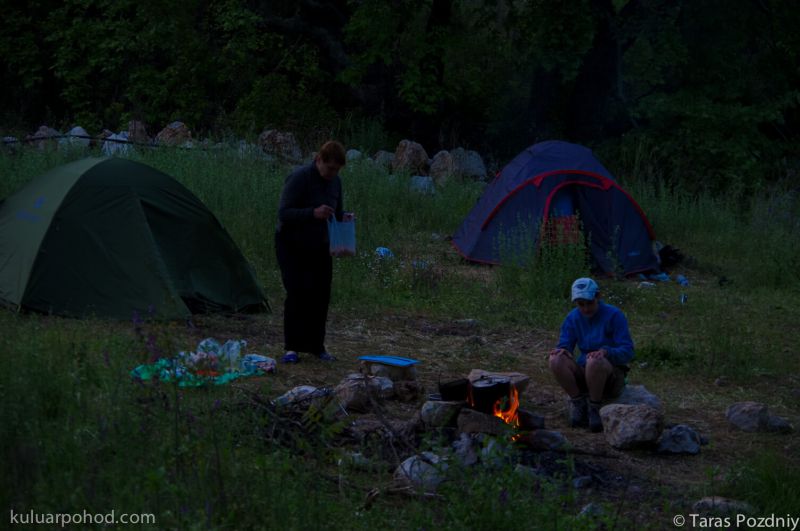 Turks love Ukrainians very much, consider us brotherly people and are always ready to help. It is very pleasant and such behavior causes reciprocity.

In the evening, after the group goes to the ruins. They are not impressive, but there is a great view of Tahtali. 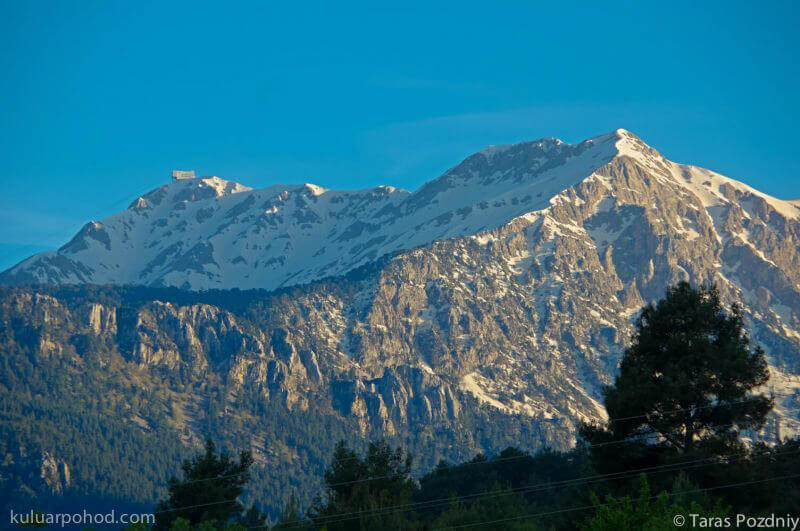 But in front of the cedars is another huge sycamore. 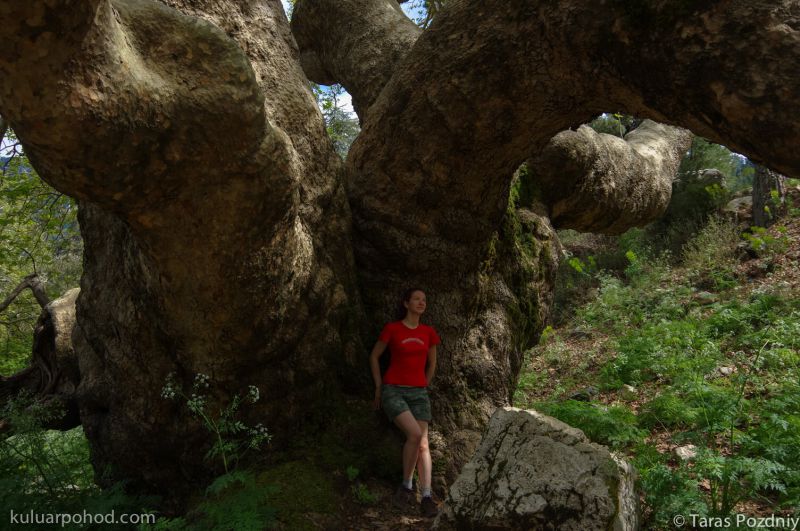 Today is the steepest day of the hike. Most of the way is along a beautiful trail surrounded by majestic cedars. 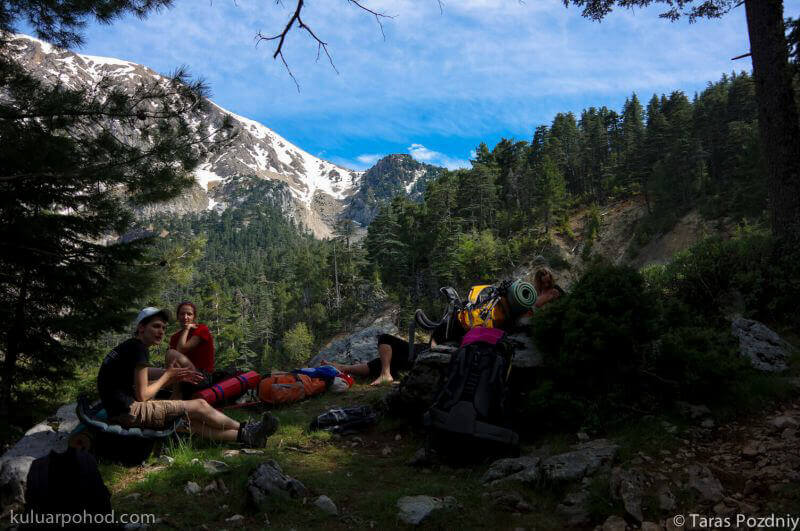 The higher and closer to Tahtali, the more beautiful the scenery and the more unusual the landscape. 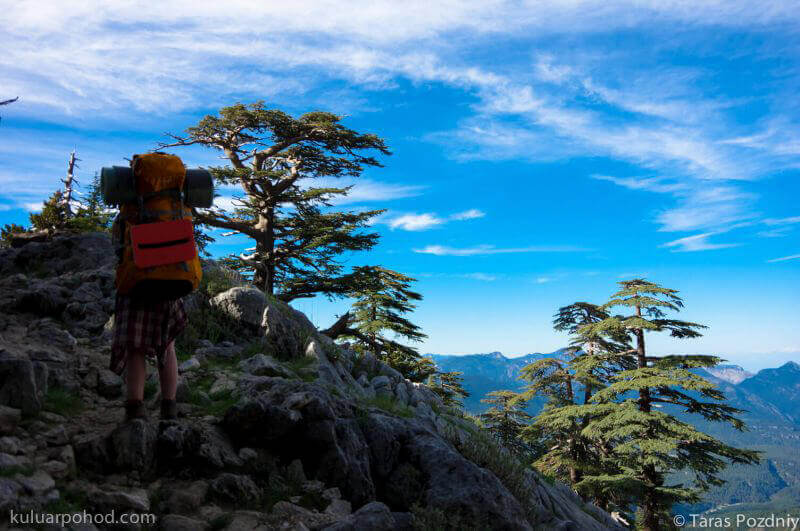 Here comes the first snow. Soon we come to the parking lot. It’s really beautiful. I really like it. That’s where I was really pleased with Lykiyka! In such place I feel strong energy and I want to stay here for several days. But we have to climb tomorrow. 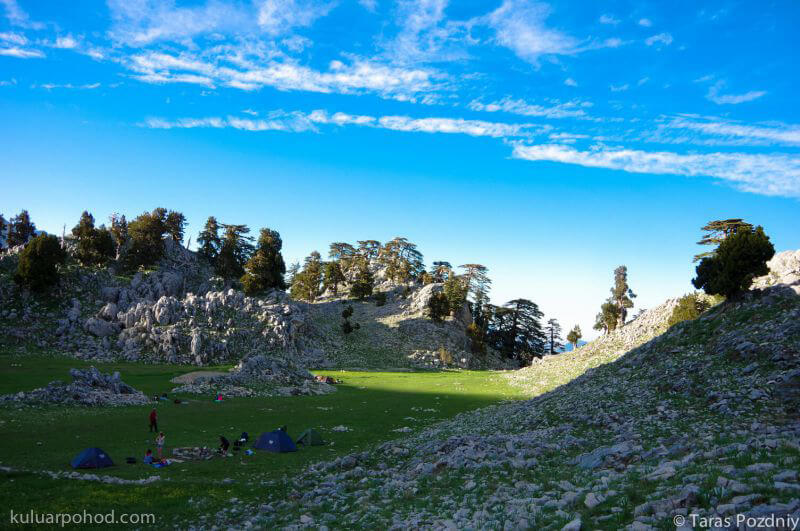 A little bit photographed, took a small time-lapse and sat down photo, unfortunate. We sat by the fire and went to sleep, tomorrow we will have an early rise and climb.

We wake up at 5:30, pack up our things and let’s go – to Olympus (Olympus is the local name of Tahtali-Dagh). The mountain is almost completely covered with snow, which is not typical for May in Turkey. But that doesn’t stop us and in a little less than two hours we reached the top. It greets us with crowds of people who came up here on the lift. They are all behind the fence, climbing on the accessible for them piece of snow and take pictures on it. It makes me feel sorry for them. How limited they are. They can’t see or feel so much. But they are happy in their ignorance and the smiles on their faces prove it. To each his own. 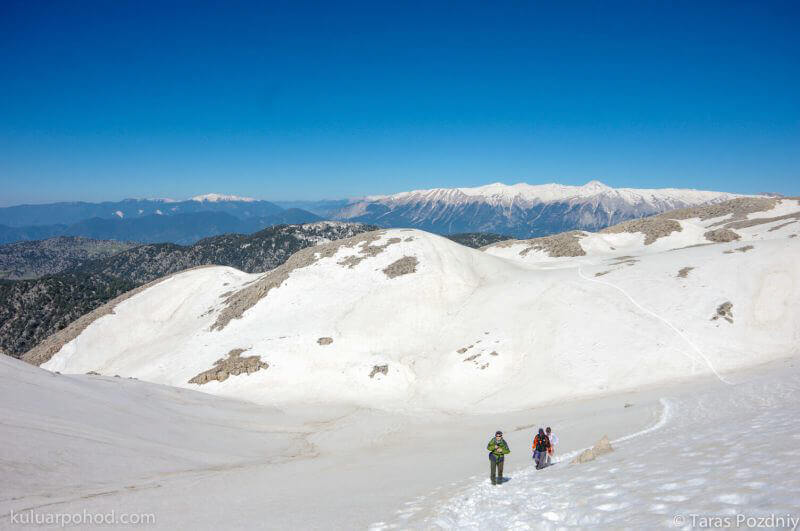 We do not deny ourselves the benefits of civilization – at the top there is wi-fi and you can drink a glass of wine for a crazy price. 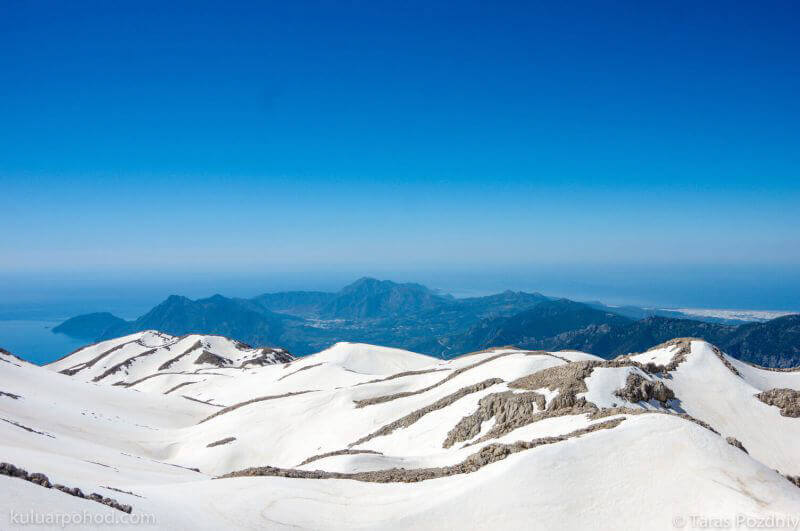 The descent is fast.  Feet are completely wet. Near the backpacks we have a snack, dry off a little and then go down. We stopped on a stony glade next to the guys from Kharkov. By the end of the trek all the groups on the route are already familiar.

The ascent to the Tahtali became one of the brightest impressions from the whole trek for all participants.

We decided to go longer and reach the sea in one day, which we did.

In Ulupinara we had lunch at a beautiful cafe on the waterfall, where they breed trout. The prices here are truly touristy. A glass of orange juice costs 10 lira. That’s okay. But it’s beautiful. 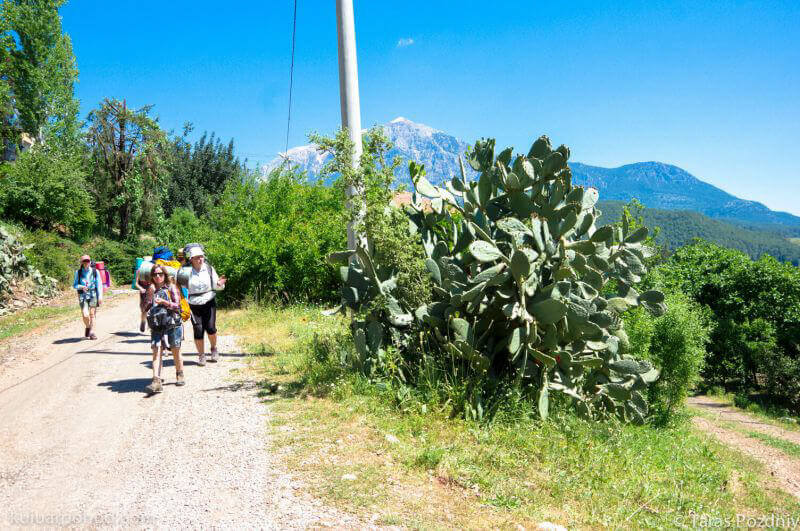 We continue on the asphalt road for a while, but soon our trail turns into the woods again. Everyone is really happy about it. Nobody likes to walk on asphalt) We crossed the river by a fallen down pine tree behind which there is a great place to swim, and we took advantage of it. After walking through the scorching heat coolness of the mountain river is very helpful.

Soon we reached the upper fires of Chimaera. There are 3 fires. It is interesting, but nothing extraordinary. We go down further. And here it is – a fiery chimera, pictures of which everybody saw, and many people go to Turkey just for her. 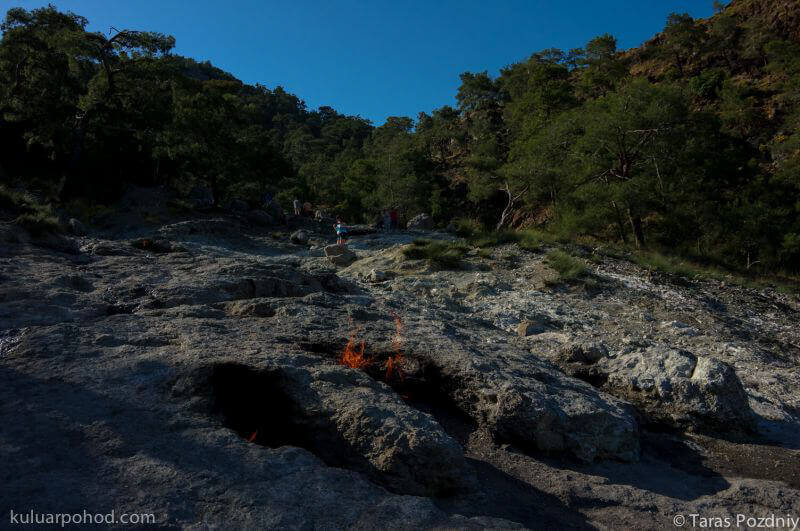 The lights are big, there are lots of them, but some are out.  We’ve got to help them! I take my lighter and light a few. There are more lights now. There are also ruins of an ancient sanctuary.

We go down to the sea and pitch our tents under the crown of a giant cedar tree. The campsite is wild, but you can use the wifi and take a shower at the nearby guesthouses. 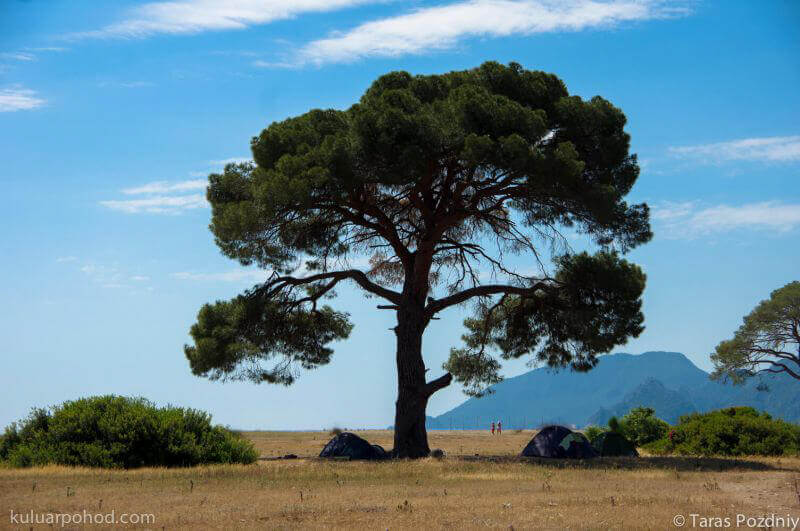 The sea is relatively warm, you can even swim, not just jump in and out. It’s clean. We swim and sunbathe, and towards evening we go to see the ruins of Olympus, one of the six major cities of Lycia. There is a lot to see. The city is big and pretty well preserved. You can walk around for a few hours, but there are too many tourists. 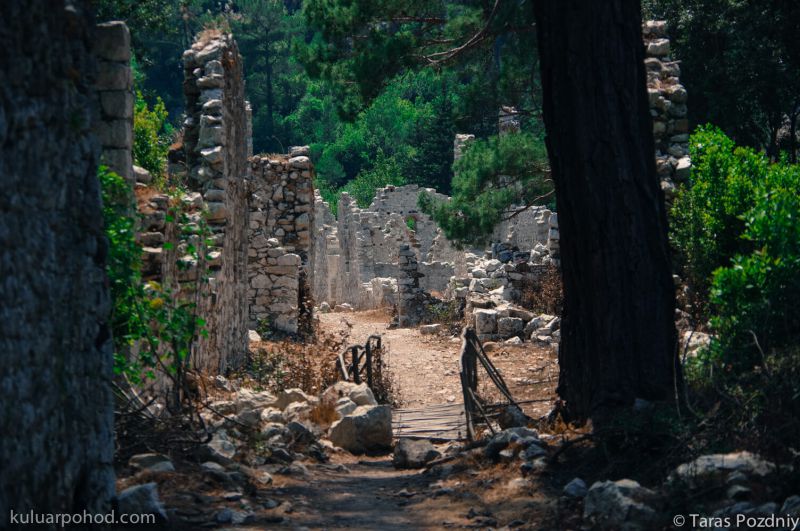 The next day we go for a walk along the sea and admire the coves. The water is azure, the coast in pine trees – very beautiful! But to walk in the blazing sun hard, and frankly – already lazy. The sea strongly relaxes. Water in the bay is even warmer than on the beach – here it warms up much better. Swimming in flocks of fish. Bathing one pleasure. Bathing, sunbathing, swimming, having a snack and returning to camp. 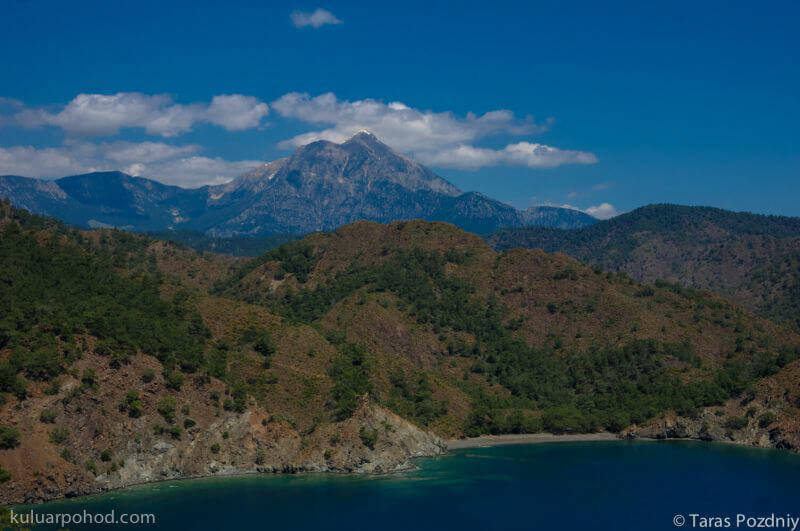 We got to Antalya by shuttle buses without too many adventures.