The trek to Annapurna - the journey that changed my life Trekking to Annapurna base camp - trek to Annapurna
Nepal
Author: Tatiana Samborskaya, 49, Moscow, Russia
Teamleader: Sergii Novikov
Overall rating
Teamleader rating
Manager rating
There are probably few people who don't love to travel. I belong to the majority. So far, the list of countries I've been to looks pretty impressive. However, for the most part all of my tours were traditional, with accommodation in comfortable hotels, with all the amenities and other amenities. This was important! I did not understand people who doomed themselves to the hardships of camping life, and I never thought that one day I would take a backpack and go hiking.

It all started when my friend, having heard some acquaintances’ reports about a trip to Nepal, got excited about the idea of trekking. It is known that in any place more fun together, and the friend made every effort to infect me with the idea. We watched a number of documentaries on the subject, went through the pages of famous bloggers, and somehow ended up at kuluarpohod.com. We liked the site. It presents hikes for every taste, level of difficulty and training, and there is a detailed description by day, with detailed information about the costs and the necessary equipment. It’s decided – let’s go! 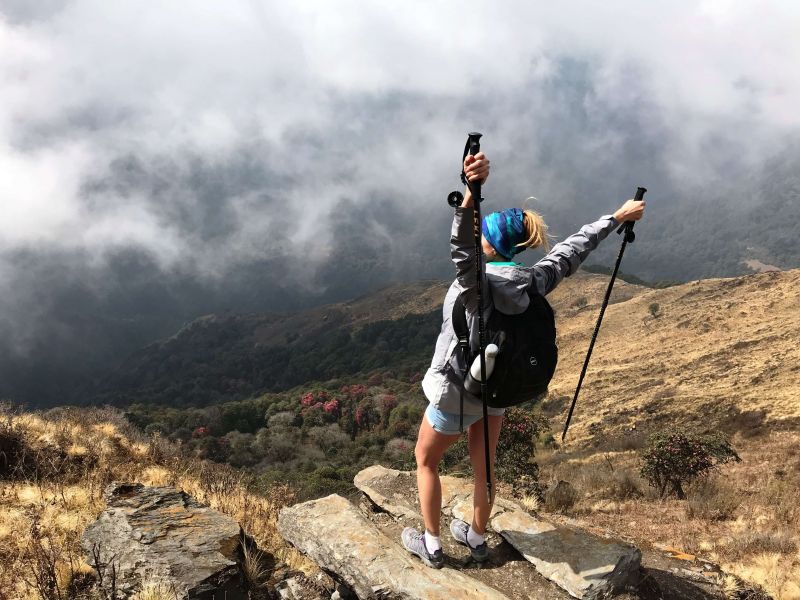 We contacted the manager of the club and after consultation we opted for a trek to ABC (Anapurna Base Camp). I have to give credit for the tact of the trek manager. In preparatory correspondence to the hike she had to answer our rambling questions: – “is there a hair dryer in the lodges?” , “…and the washing machines?” , “…is there a vacuum cleaner for vacuum packing things? And so on.” It’s funny now, but at the time it seemed to us that we couldn’t do without it. We had never left our comfort zone. And then the day came (I couldn’t believe it until the last moment) when I took my backpack and headed for the airport. ….

Kathmandu was greeted by sunshine (contrast to the cloudy and rainy Moscow) and the Holi festival. A day for sightseeing and getting ready. We had hardly stepped outside when we stopped to look like ourselves. Faces, hair, clothes of all colors of the rainbow. Crowds of people laughing and shouting “Happy holi” everywhere! We were charged with the prevailing atmosphere of unbridled joy, and in the dense stream of people celebrating, we walked through the streets to the main square of the city. Emotions are running high. 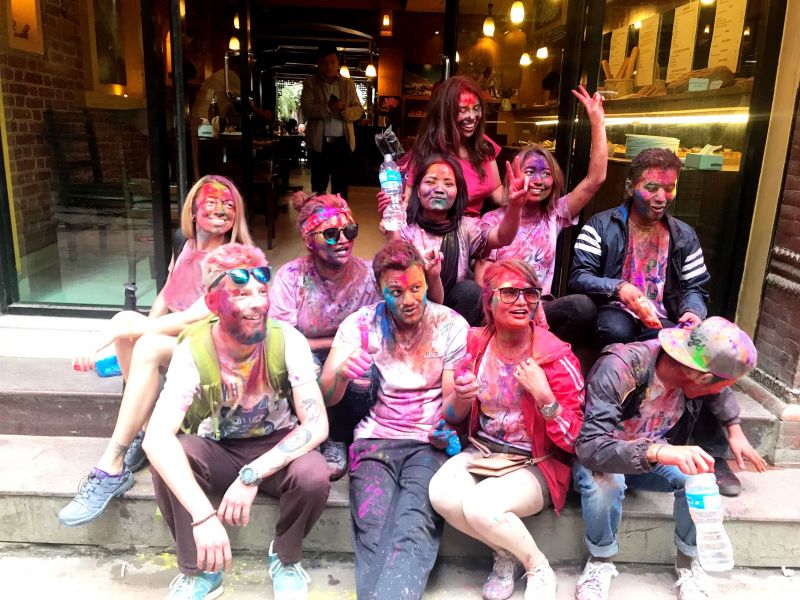 The next morning we take a bus from Kathmandu to Pokhara and from there by car to Ulleri. A little more walking and we hardly go under the roof of the lodge when the sky is covered with thunderclouds and hail falls on the village. Hail the size of a pigeon’s egg. I’ve never seen anything like that in my life. But the terrace of the lodge is cozy. And with masala tea, it’s twice as cozy. 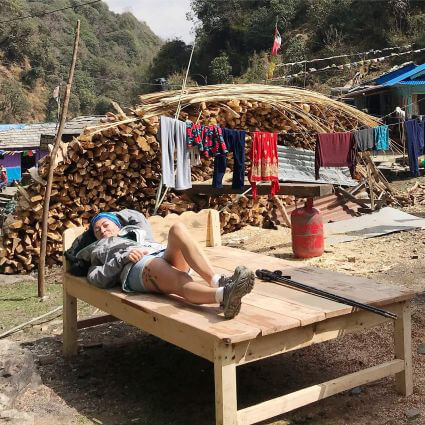 The first trekking day from Ulleri to Gorepani. It was extremely difficult for me, who was completely unprepared physically: my heart was pounding at the temples, my breathing was confused, I was thirsty all the time, and I was not at all happy about the views. And I had no time to turn my head. My pace lagged somewhat behind the general pace and I had to look under my feet. From time to time questions came to my mind: “Why am I here? Why did I cheat and go to the mountains instead of lying on a beach somewhere and sipping fresh fruit through a straw? Why, why did I sign up for this?” Barely made it to the lodge. There was no electricity (it happens in the mountains). I could barely wash myself in the shower and hurry up to my sleeping bag. No appetite. At dawn on the plan of a small “walk” on Poon Hill 3193 m. I wish I could survive)) 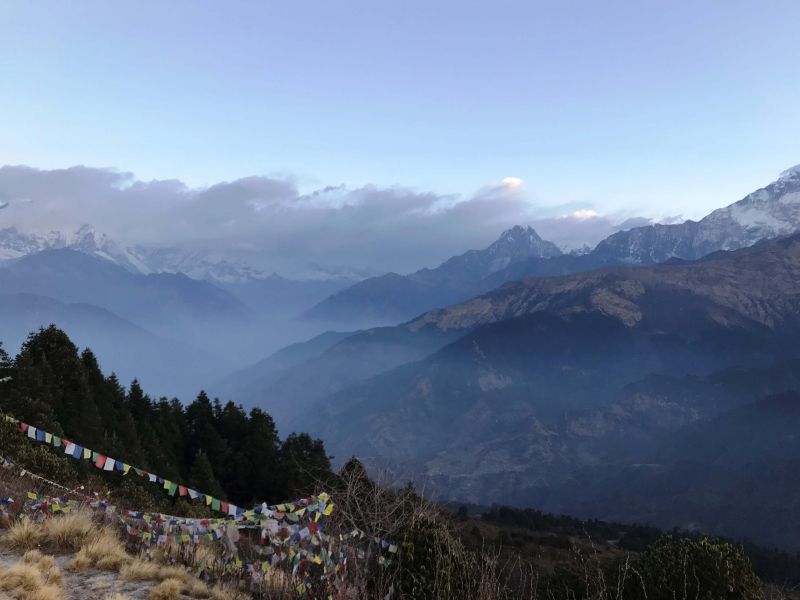 The morning of a new day. We get up in the early morning and immediately leave. We light the way with headlamps. All the way up the stairs. My legs are cotton. Whether my body is not awake yet, or it is too abrupt a start for me, but I feel bad. My head is spinning, my eyes are getting dark. I was at the very end of the group. The guide even offered to stay in the lodge and not to make fun of myself. There’s still a day’s hike ahead. But since I’m out, I go. (I was drenched in sweat and climbed up). Someone carefully put in my hands a mug of tea. Ordinary black tea. But how delicious it seemed to me! And what a view from the top! Both Anapurna, Machapuchare, Dhualagiri, under the snow caps, in the dawn rays were golden pink. Majestic and beautiful.

From that moment until the end of the trek, I no longer encountered difficulties physically. Maybe it’s strange, but it’s a fact. Climbing this hill (they say Poon Hill is not a mountain for the Himalayas at all) was a turning point for me. It was like a second wind had opened up. Then, with each passing day, I became more and more excited about the panoramic views and the thrill of the ride itself. It took just a few days after the start of the hike and it turned out that the cold water to wash is not so scary as it might seem at first (there is not always hot water on the route), hair dry without a hair dryer, and not dried overnight washed underwear quite dry for the day hung on the backpack))) 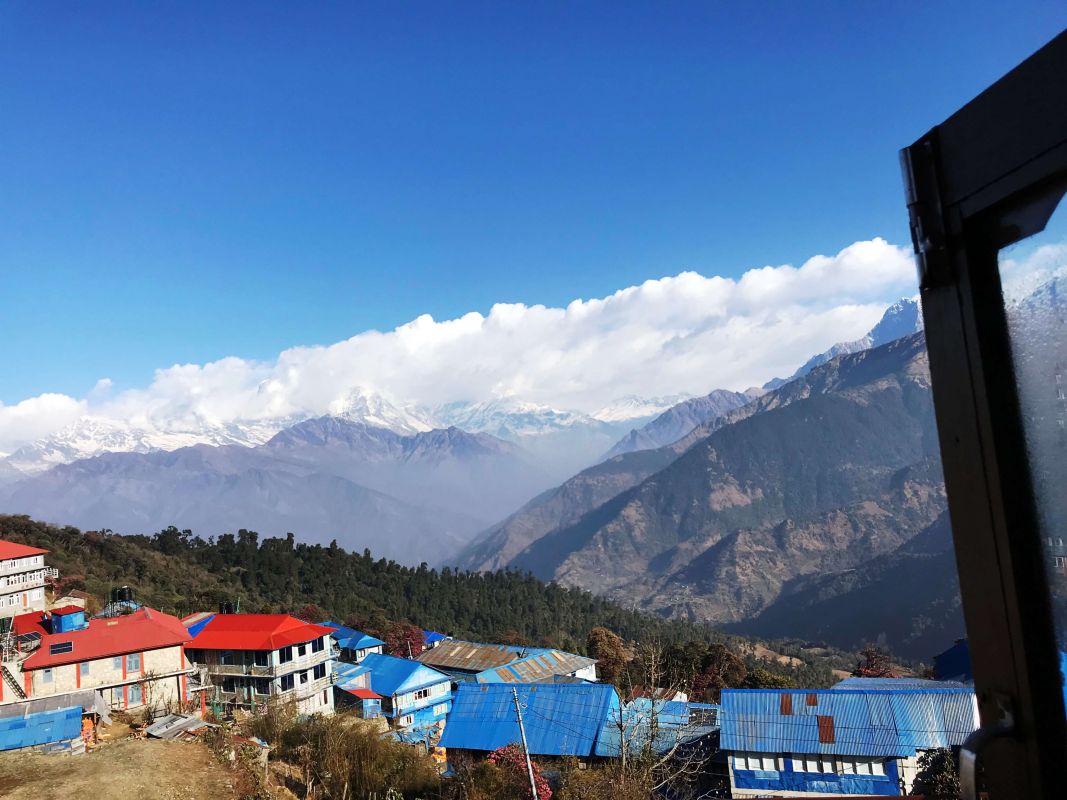 As for the food, after a day’s hike, the Egg veg noodle soup (a Nepalese variety of instant noodles like Doshirak or Miwina) spiced with egg and fresh herbs is as good as a restaurant dish. Separate mention should be made of the “mountain” Nepalese desserts – Mars roll and Snickers roll, which are chocolate bars of the same name wrapped in a sheet of puff pastry, fried in butter and covered with custard on top. You have to think of something like that)) Well, in the mountains there are no roads, only paths, and the main pulling force – a donkey, so it is understandable that local chefs have to improvise with a minimum set of ingredients) And just imagine our surprise when one day our guide told us that in the next village to the one in which we are staying overnight, there is a coffee house with real coffee and real desserts! Not instant coffee with powdered milk, but real Lavazza! Croissants, brownies, chocolate cake, and even cheesecake! Incredible, but true. And what’s a detour of several kilometers through mountain trails for a coffee drinker?)

Hiking in Nepal was transformative for me. The Kuluar website says that the team’s goal is to instill a love of travel and hiking. I can say with confidence that with regard to me the goal of the team was achieved! A sea of vivid impressions and positive memories was received, as was guaranteed by the team. Now November is on the calendar, the hike to ABC was in March. In September with Kuluar I went the Santiago route in Spain, and yesterday I bought tickets to Nepal for December. Going to hike to Everest base camp with the guys. Three hikes in one year. That is saying something!) My review is not just words! And I can not avoid mentioning our guide Sergei Novikov. With him I went to ABC and six months later with him went the way of Santiago. He can not control the weather, but with everything else he does in the best way. 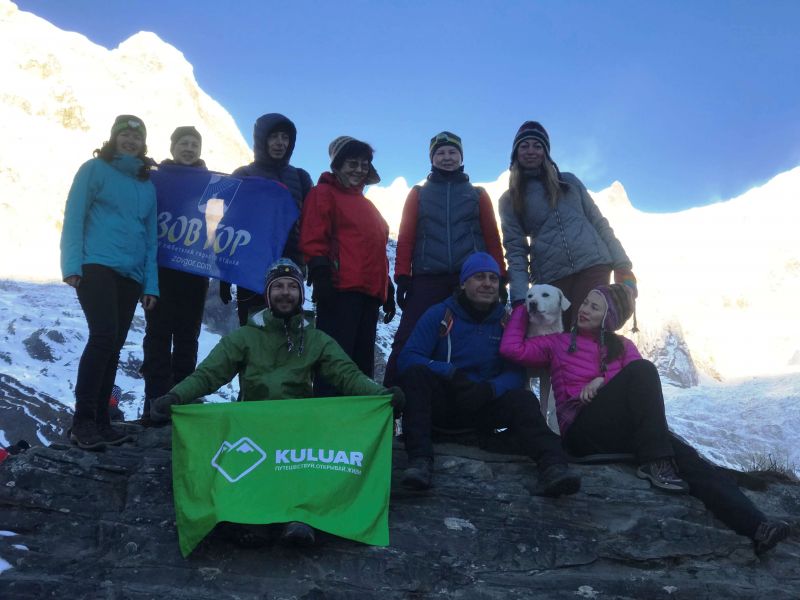