Trekking in South Iceland - Journey to Mars
Iceland
Author: Taras Pozdnii, Ukraine, Bila Tserkva
Teamleader: Taras Pozdnii
Overall rating
Teamleader rating
Manager rating
Hi all! Literally the day before yesterday (from the moment of writing this text) we returned from our first "Kuluar" hike in Iceland. Of course, there is a lot to do at home, but the heart wants to write about this wonderful country first, while the memories are still alive and as vivid as possible.

But how could anyone forget such a thing? Iceland is an extraordinary country and there is nowhere else with such a diverse and beautiful nature! At the same time the route is so full that it is impossible to remember all the beauty we have met along the way. But we are going to try.

The group was large - there were 16 of us, 14 participants, me and my helper. We met some of them in Borispol, some of them in Keflavik, and the rest of them in the camping in Reykjavik. The group was international (as it always happens) - 8 people from Ukraine, 4 from Moscow, and another 4 from Minsk. I want to thank everybody at once, because for a good hike the route is not only and not so important, but more its participants. We've chosen a great team - strong and interesting, it was a pleasure to talk to everyone. 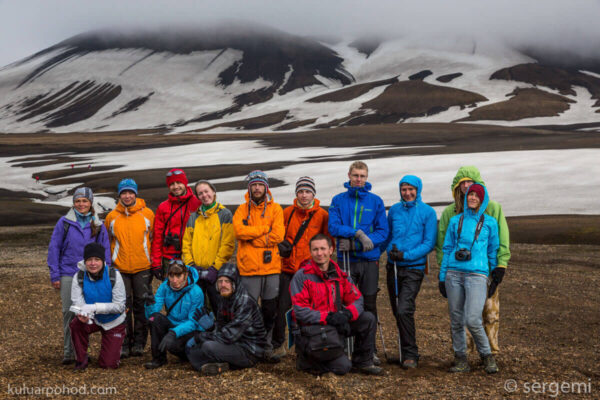 But back to Iceland and the route. I will not describe the days, I will try to write as short as possible, going through the memories one by one. It may be a little chaotic, but that's okay.

And so, in the window of the plane was clearly visible deserted land, overgrown with moss and grass, with scattered here and there black rocks. In the distance we could see mountains, the slopes of which were covered with small snowflakes. A little while longer and we land. My heart sank - here it is, fabulous Iceland! It was a long way, but you don't feel tired, there's no place for it - everything is new and interesting, there's no time to get tired! We meet the participants and go to the camping.

Despite the fact that much of the country is not settled, the popular tourist routes are very civilized. Each night we stay in a campsite, which has a good toilet, hot showers, and a cabin. Showers are paid and free (up to 500 kroner for 5 minutes, 100 kroner is about $ 1), all parking lots are paid. The campsite is usually a lot of tents, you come, find a free place for your group, you set up camp. Afterwards you can go and pay, or they just come up to you. You don't have to make a reservation in advance. All in all, campgrounds bring a share of comfort to hiking in Iceland and allow you to recover from bad weather.

And the weather varies, although we were lucky. Only one day it was really rough - the wind knocking us down at the crossing and the rain at the same time. Good, at least the rain was warm. Half the days the sun looked out, but almost every day something was dripping from the sky. In time you just don't pay attention to it - membrane clothes allow us to ignore it. The temperature during the day ranged from 12 to 20 (a rare exception) degrees, at night it dropped to 5. There is a saying about the weather: If you don't like the weather in Iceland, wait 5 minutes. You can make up the ending yourself, we have several options. But personally I did not notice the frantic speed of weather changes - everything is standard. In general, if you go during the season - the weather is not so bad, but good clothes and a tent are required. 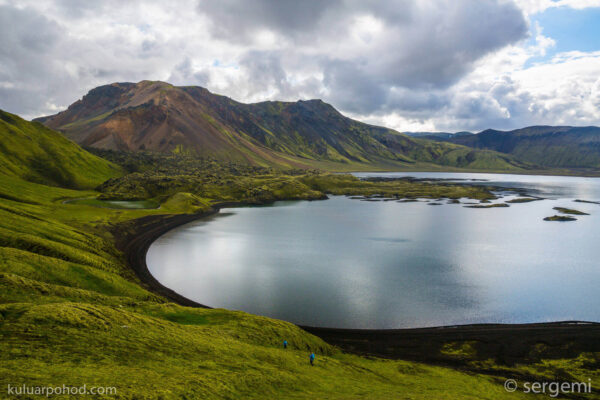 For the typical citizen of the CIS buses prices seem just crazy! But they are comfortable, they have wi-fi, and it's a pleasure to ride there. In addition to the trip you can enjoy the magnificent views outside the window for free.

In Iceland, Icelandic kroner is used. The rate is something like this: 100 crowns = 1 dollar, 150 crowns = 1 euro. But everywhere you can pay with plastic cards. I didn't even change the currency - why? I really liked this feature, it is extremely convenient. You can pay for the bus, camping, excursion, a cup of tea and ice cream - everywhere you can use a plastic card. The card must be with a chip, and not just with a magnetic tape. 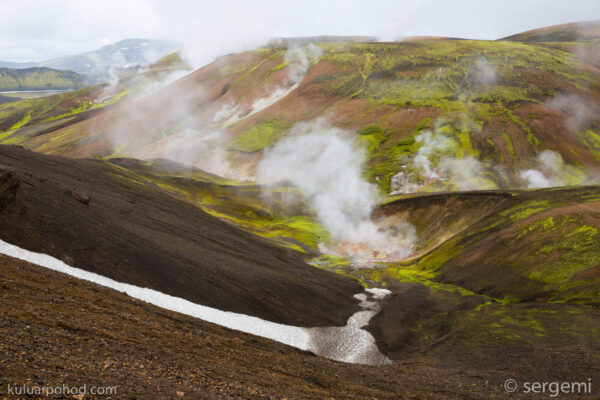 We left the campsite in Reykjavik early in the morning. Although the time of day is not so important in Iceland - the nights are white. For the first two hours the scenery outside the window was unusual, but very dull. And then I was seized by fear: "Won't Iceland disappoint me, may be I have imagined and twisted its fabulous beauty? Is it really not like that?" Tranquility was brought by the first mountains, we drove near the Hekla volcano that the bus driver had told us about. Snowflakes slid down the gray-green slopes, overgrown with unusually colored moss, with white tongues sliding down. I liked it already. I knew Iceland would not disappoint me. Closer to lunch we arrived at Landmanaulager. We set camp, had a quick snack, and went ahead - to walk in the colorful mountains. I decided for myself: even if there was nothing else in the north that would surprise me, this first day was already worth the trip. I can't write and words can't tell me all the beauty of the colorful smoking mountains, but there is nothing like them in the world. This is a photographer's paradise. Although not just here, perhaps all of Iceland is a photographer's dream in its purest form. 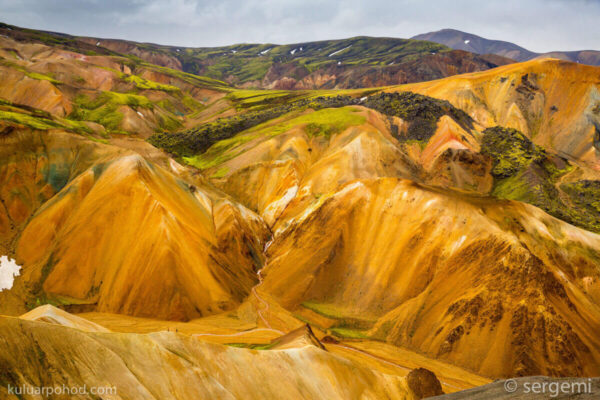 After what we saw in Landmanaulager, it was hard to surprise us. That's what we thought, and we were absolutely convinced of our delusion. But it is not for nothing that Iceland is called the country of contrasts - very soon the colored mountains were replaced by two-color - gray volcanic slopes overgrown with moss of bright salal color. Nowhere had I seen moss that brightly colored. There were lakes, mountain rivers, waterfalls, lava fields, volcanoes and snowfields, canyons and stone trolls. Everything is extremely beautiful, peaceful and varied, all worthy of a separate description - but then you get too many letters and it would be boring to read them)) 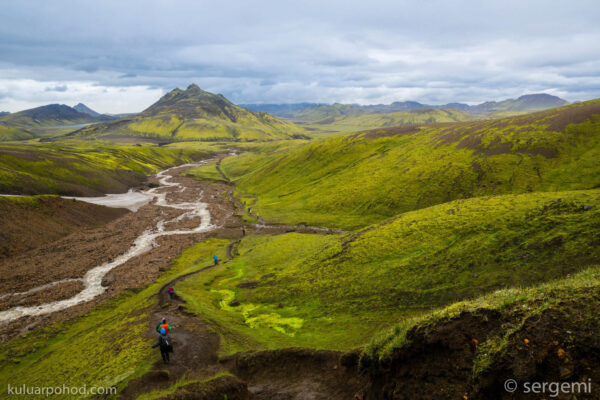 One of the highlights was the last trekking day of the route. Due to the lack of water at one of the campsites, we decided to do a double hike in a day and then take more rest. The first part of the day we walked up, along a beautiful canyon to volcanoes and lava fields. After passing between two glaciers with typical Icelandic names that are inferior to any of our shortcut glaciers, we began our descent along the Skougau River. It is undeniably the most beautiful river I have ever seen in my life. The first waterfall we met we were really happy and surprised - there are no similar ones in Ukraine. But, as it turned out - it was one of many waterfalls in Skougau, and not the biggest and most beautiful. Every 10-20 minutes the river gave us a new unique waterfall in shady green gorges. It was simply unreal to pass by. One can't help but wonder, "which impresses me more - the waterfalls or the river canyon?" I did not find a definite answer for myself. Toward evening, we, extremely tired, but very proud of ourselves, reached Skogafoss Waterfall - one of the hallmarks of Iceland. It is the largest and most easily accessible waterfall on the river, but we must admit that there have been prettier ones above. We eat and go to bed to the roar of falling water. 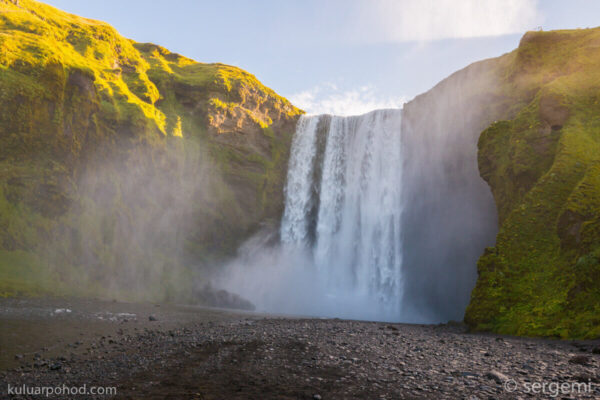 The Atlantic Ocean - the black beaches of Vik

In the morning we boarded a bus and drove to Vik, the southernmost village in Iceland. Here many of the group checked another box on their list of goals - to swim in the ocean. I must say that except for us, no one else was swimming and looked at us more like we were crazy. Well, what do we care? The water is cold, but the beach is shallow, the waves are small, the bottom is sandy - the sand is black. After swimming we walked to the nearest rocks to look at the puffins - another symbol of Iceland. Can you imagine flying penguins? Well, that's what dead penguins look like. Very cute and funny birds. 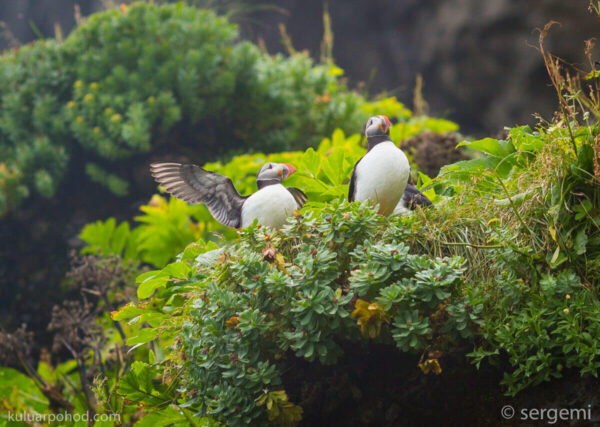 Another cherished place that leaves an indelible mark on the soul. There are lots of ice floes of absolutely fabulous color, seagulls and sea lions swim here. They say Antarctica looks cooler. Well, let's check it out, let's see. 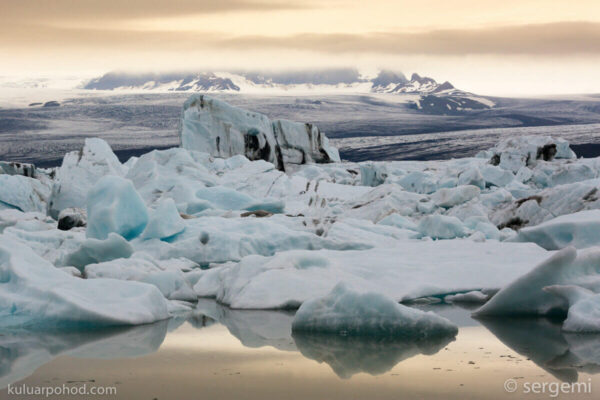 Perhaps the most popular day trip in Iceland. It's the best of the best. Well, here we went on a tour in a small minibus. First was the geyser Strokkur, it pleases the crowd of gathered gawkers every 5 minutes with powerful shots at a height of 15-20 meters.

Next we drove to Gudlfoss waterfall. We were very lucky with the weather - it was sunny and there was an amazing rainbow. A powerful, beautiful two-stage waterfall, framed by a full rainbow - I really liked it. Half an hour was enough for us to admire this miracle and take lots of pictures of it. But another curiosity awaited us - the split of the North American and Eurasian tectonic plates is nearby, in Tingvetlir Park. One step and you're in America. Isn't it fast? - jokes the tour guide. Next to the rift is a big and cozy lake. I'd like a house in a place like that. By the way, this is where the Icelandic Parliament met and made fateful decisions. 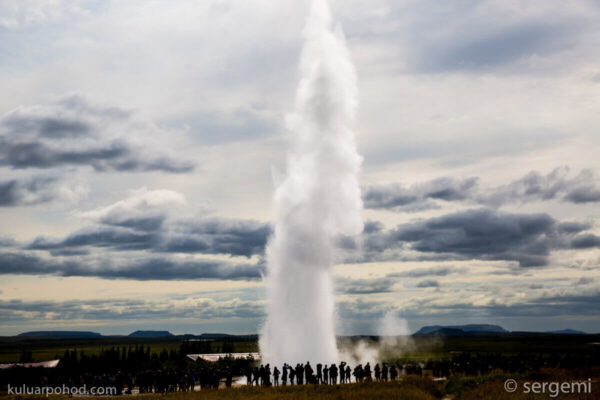 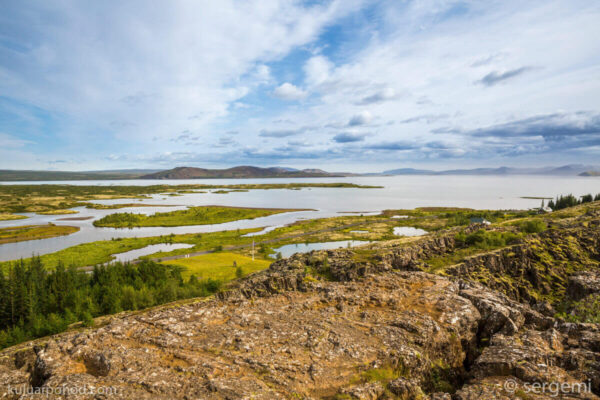 The ice cream is delicious.

I couldn't help but write about it - it's awesome! It is sold in a cone at all gas stations and cafes, and costs 3-6 dollars a portion. But it comes in big portions (we always took the medium, no one ever dared to take the biggest), it's dipped in milk chocolate and you can also roll it in crispy balls - it's just delicious. You can really fill up on just one portion. Try it!

Iceland is a wonderful country, living its own leisurely life. Though the climate here is not very hospitable, but people are kind, open and cheerful. It is hard to imagine a more diverse and beautiful nature. It disposes to calm and harmony. Everyone should go here and I myself will come back to the country of ice and fire many times!