On the way to dawn Trekking to Annapurna base camp - trek to Annapurna
Nepal
Author: Olga Kremleva, 35, Ukraine, Dnipro
Teamleader: Sergii Novikov
Overall rating
Teamleader rating
Manager rating
There were two goals: to see the Himalayas and to test my own "hikability". Both of them were achieved: the ascent by foot to the altitude of 4130m, at the limit of my own abilities, the sunrise at the foot of Annapurna, the most dangerous peak in the world. And, of course, an overnight stay beneath the house of Shiva, Machapuchare, a sacred mountain on whose summit man has probably never been.

I started preparing for the trip unforgivably late: I naively thought that I already had both trekking boots and membrane clothing… I did not understand the terms. But, as it turned out, the main thing – to buy shoes and underwear, and everything else can be found in Kathmandu, and cheap (though it will not be the original stuff, but for such a campaign is good enough) and with an experienced guide as a consultant. It saves money and time (which I completely wasted, running around shopping in my home town).

I will write a little bit about the equipment.

It is very convenient that the website “Couloir” has a detailed list. Some things are listed there as desirable, some as mandatory.
Trekking boots – this is exactly what is mandatory. Tested it on myself. Preferably with special socks. I bought the shoes just the day before, had no time to wear them, I thought – I’ll rub my feet. But, fortunately, and did not rub, and my feet were much better than the usual sneakers.
Membrane pants came in handy once, and then – we could do without them. If the walking pants dry quickly, I think they’re enough.
I did not buy a membrane jacket, but in Kathmandu I took on the advice of Sergey (our guide) something between a rain jacket and a storm jacket. It is comfortable, thin, waterproof, and dries quickly. If you wear thermal underwear and a fleece under it – warm. In addition, you can be insulated and down (so “storm jacket”; you need to choose so that under it all fit).

And the usual polyethylene raincoat was never useful to me personally.

There are trekking poles on the equipment list – optional. To tell you the truth, I was not going to take them, but Sergey advised me to take them and in the first days I understood that I did the right thing by obeying this advice. Trekking poles are indispensable for going downhill: they help to relieve my knees and give me additional support, which is very important after the rain, for instance. On the ascent you can relieve some load on your legs, and the poles are especially handy in those moments when without them it seemed that you would grab your arms and crawl.

Buffs. Very necessary thing, at least 2 pieces per person: one on the head, the second on the neck (and from the sun hides, and you can cover your mouth and nose – or from dust, or from cool air).

Special preparation, except for the purchase of missing items, was not. Insurance took out – fortunately, did not have to use. Special drugs are not taken, only a standard first aid kit. On the day I packed my bag and left the apartment.

Sergey met a small group of people who were travelling on the same flight at the airport in Kathmandu. The airport is small, and once outside we immediately saw the “Kuluar” flag. We got acquainted, piled into a cab, and drove to our hotel.

Kathmandu is a city that either depresses and disgusts, or makes us want to take a closer look, dive into the bustling life, and just go with the flow for a while. Dirty and dusty, careless and crazy, Kathmandu has a special charm that is important not to miss. Some have said that it is an Asian version of Amsterdam, and I think the comparison is apt. 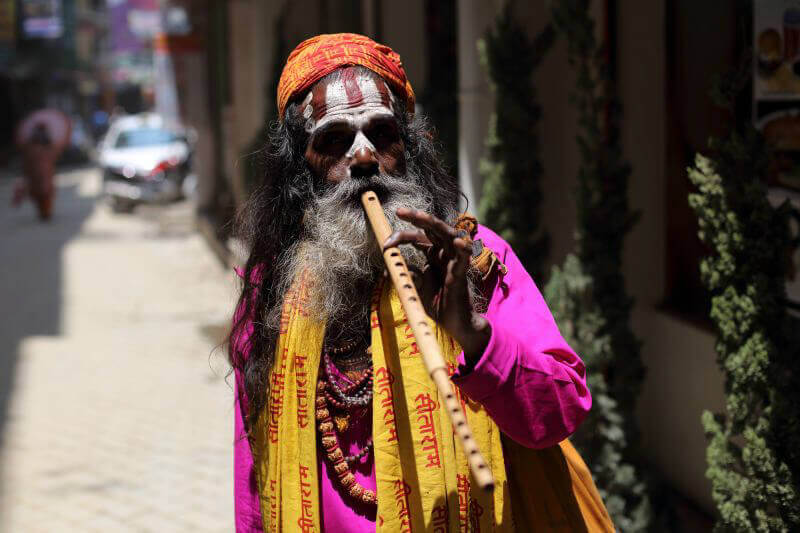 It would be nice to have two or three days in Kathmandu: sightseeing and shopping… No, not that: shopping! Here you can buy products made of cashmere, yakka wool, yakka bones, with images of yakka… bracelets, figurines, scarves and stoles, clothes in ethnic style (but the ones worn by locals, look for in non-touristy areas), and, of course, souvenir T-shirts (in many places men in front of you embroidered on the T-shirts copies of popular prints and colorful mandalas). You have to literally grab yourself by the arms and carry your feet away before they talk you into buying something.

There is a lot to see in Kathmandu, too. We visited the Buddhist temples: the stupas of Swayambunath (aka Monkey Temple) and Bodnath (around which are the most popular bars and cafes in Kathmandu), as well as the Hindu temple of Pashupatinath. Whereas the Buddhist temple with its magical combination of white stupa walls, sun, sky and colorful prayer flags left the brightest impression, Pashupatinath, with its clingy beggars and fake sadhus seemed a dark, depressing place. Pashupatinath is a temple-crematorium where corpses are constantly burned, but it was not this ceremony that was the main negative impression, but the filth and slovenliness, as well as the constant attempts of the temple inhabitants to lure the tourist for a coveted dollar. 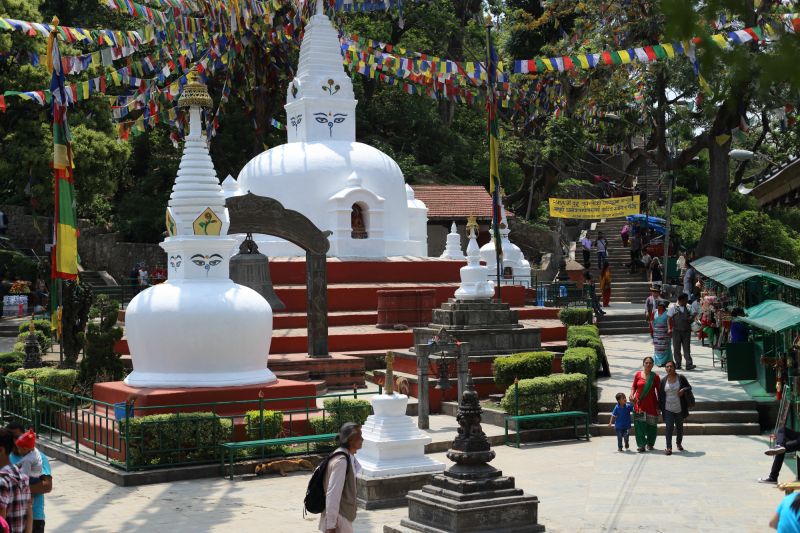 But we had time for the tour after the trek, and after arriving, having bought up and rested a bit, we left early in the morning for Pokhara.

Compared to Kathmandu, Pokhara with its huge lake seems like an oasis. On the way back we managed to walk around the city: we visited the Stupa of Peace, admiring the view of the city, which opens from its foot, and a boat ride on the lake, docked on an island, which is a small but famous Hindu temple (just there was a celebration of the naked pilgrims from India, some came as a family). If you have time to walk through the shopping aisles in Pokhara – there are many interesting things that you can’t buy in Kathmandu, and, oddly enough, many cheaper (the same souvenir T-shirts). 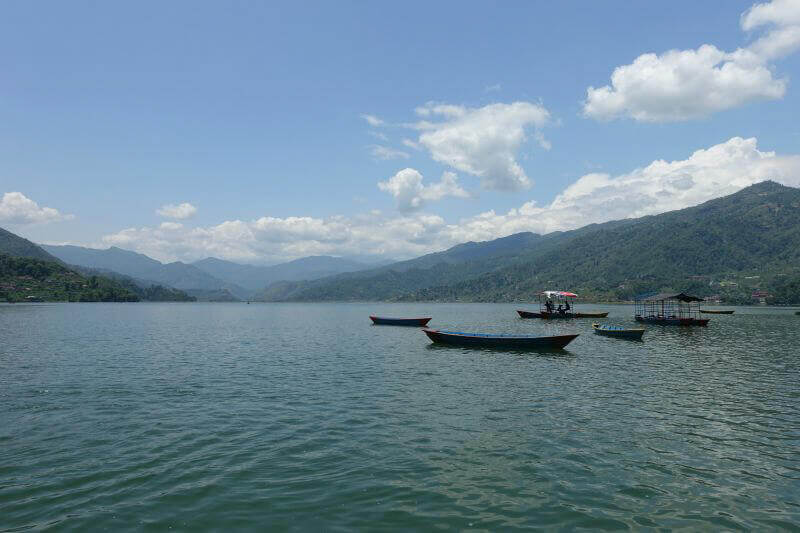 Before the trek in Pokhara we did not linger. We had lunch with a view of the lake, a jeep ride into the reserve, a half-hour walk, and our first overnight stay in a lodge.

Honestly speaking, opening the door of my room with my husband, I was very surprised: I was preparing to the primitive living conditions, and I was met with two beds with clean sheets in a small but neat room with windows and a table. Warm blankets are included. The restroom was just around the corner and washed regularly. The shower is also nearby, but for a fee, as is wi-fi. If you get cold water in the shower – you can not pay for it.

The next day was a real start to the trek. How many of these stairs were there? Thousands, I didn’t even try to count. On the first day we went through the heat and rain, and the slope open to the sun, and the mysterious forest. We walked for a long time, my body was adjusting to the pace. In the evening we were rewarded with a room with a view of the mountains, a shower, and a delicious dinner.

In the morning we watched the sunrise on Poon Hill. It was then, perhaps, that we realized that all the anguish of the previous day had not been in vain, and that something magical and incredible lay ahead. 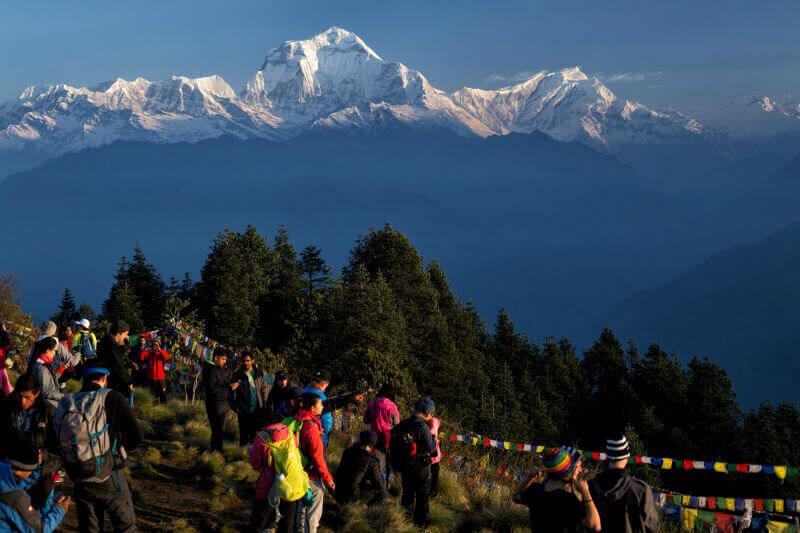 Afterwards, we met sunrises several times on our own accord – on the verandas, because from the lodges we could see both Annapurna and Machapuchare, from behind whose slope the sun was rising.

Every day the scenery changed. There were bamboo groves and jungles, mysterious mossy forests and gorges with mountain rivers. Stone steps, hanging bridges over the abyss, glades with a view, villages with blue roofs, steps again. Sunny weather could change to rain with hail, and then the sun would come out again. The turning point was an overnight stay in Chamrong: there, enjoying a delicious Nepalese coffee, we sat on the terrace and looked up at the peaks of eight-thousanders, which now rose up directly in front of us, covering half the sky.

The hardest part of the trip was the ascent to Machapuchare base camp. The ascent is gentle, but the altitude began to be felt here. It seemed to be easy and habitual for our muscles, but it became more and more difficult to walk. Still, this was probably the most beautiful day I had ever had, because we walked through places I had never seen before. It was no longer a jungle of rhododendrons-the yellow-brown grasses, the curved branches of sparse trees. Numerous waterfalls tumble down the cliffs, and in some places there are vast snowfields. The mountain tops are hidden in the clouds, but as soon as the haze parted, the sharp peaks emerge at a mind-boggling height. 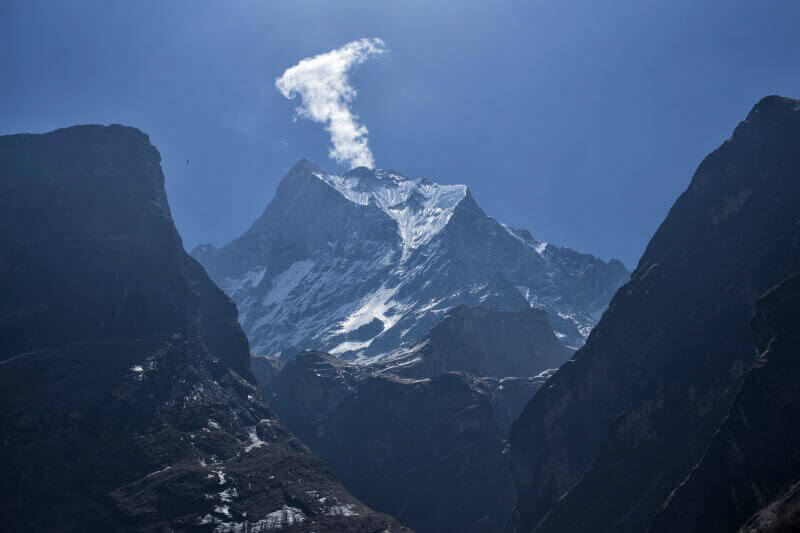 Nature, as if rewarding us, gave us perfect weather: the sun was looking through the clouds – an incredible sight, perfect for photos and not hot. After resting in Machapuchare base camp, where we planned to spend the night, we still found the strength to climb the “hump” to look at the moraine – the trail of the glacier.

We reached Annapurna base camp after dark. If we stopped and switched off our headlamp, we could see a scattering of stars and snowy mountain tops that seemed to glow in the dark. The sunrise at 4130m was the culmination of the entire trip. Unfortunately, we stayed only a couple of hours in ABC, but the incredible sunrise and the way back – the beautiful 2km between ABC and MBC – were definitely worth it! 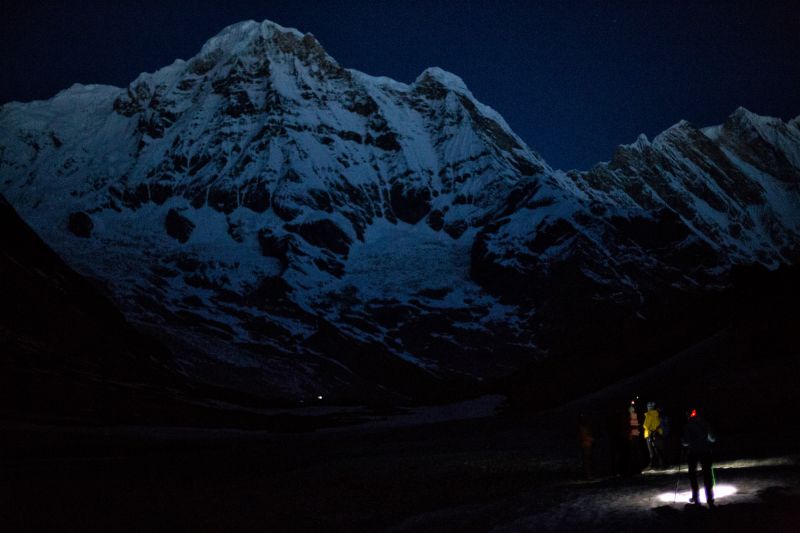 The trek to Annapurna base camp is considered the easiest of the long hikes usually offered to hikers in Nepal. However, to pass it, you should not be physically prepared (although a certain endurance is necessary), but be prepared for difficulties. That it will not be an easy walk, but, for example, 10 km of stone steps in a day (which, incidentally, sounds scary, but in reality is not so scary). 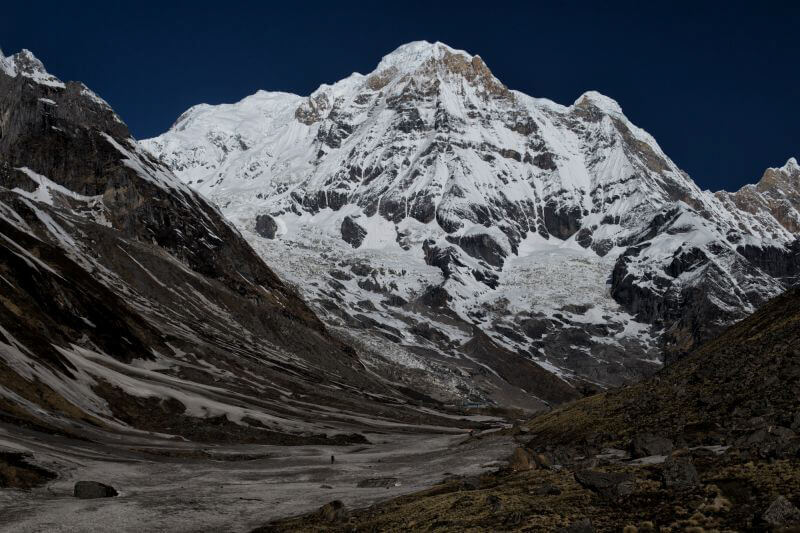 In doing so, you will sleep in comfort and cleanliness, eat delicious food, and run absolutely no risk of getting lost. You’ll discover masala, noodle soup, and two hundred ways to make delicious rice. You’ll see two worlds in one country: the crazy cities in the valleys and the quiet, clean villages on the slopes of the Himalayas.

Fall in love with these mountains, the highest in the world.

And despite all the difficulties, you will definitely decide to come back.