Troll's Tongue Trek - hiking in Norway
Norway
Author: Marina Gutsalenko, 30, Poland, Lublin
Teamleader: Taras Pozdnii
Overall rating
Teamleader rating
Manager rating
When I was choosing a trip and finally chose Norway, I had no idea that it would make such an impression on me. On the bus, on the way from Bergen airport to the city center, looking at the views out the window, I convinced myself that it was nothing special, a country as a country.

Upon arrival in Bergen, we checked into the hostel where we were supposed to meet the group and went for a walk around the city. And for all my dislike of rain, and it was raining at the time, I liked the city at first sight. 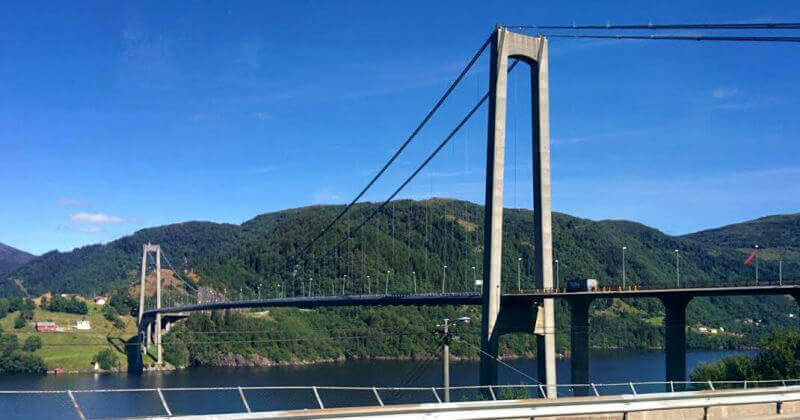 Near the fountain at the park, despite the rain, musicians played. People were not upset by the weather. But the people are a separate story. Most of the people in Bergen looked like they came off the cover of a magazine. Long-haired natural blondes, athletic blondes. All in great shape and in good spirits.

The first thing I wanted to do, of course, was to go to the promenade. 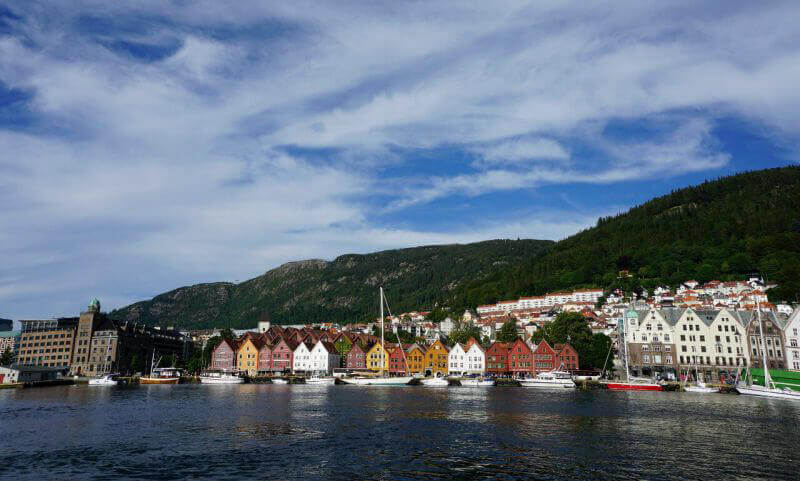 This is a very beautiful place, the water is clear and you can see the starfish at the bottom. Seagulls are constantly circling and shouting overhead. Nearby is the famous Fish Market. If you do not look at the prices, it is insanely delicious. You can try all sorts of exotic dishes, like whale meat. In the evening, after a walk through the city, sitting in the kitchen in the hostel, suddenly realized that now the sunset (it gets dark, by the way, in Norway, quite late), and we ran to the quay. Sunset, unfortunately, missed. But, the night of Bergen, all in lights gorgeous. It is impossible to describe, you need to see with your own eyes. So ended Day 1. 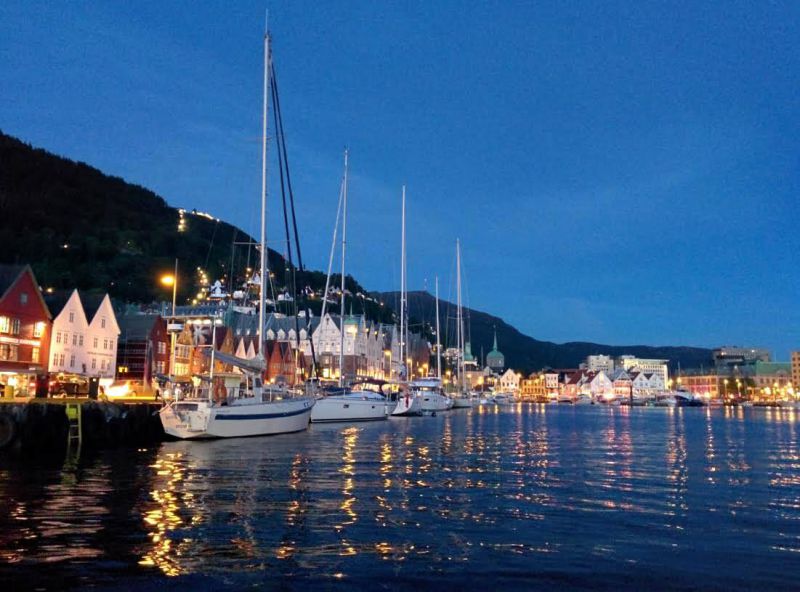 The next day, Day 2, we have a breakfast of Taras’ delicious rice with condensed milk (very nourishing and caloric, not to be repeated in everyday life) and go to the bus station to go to Odda. On the way to Odda, the view from the bus window is fabulous. We were lucky and the weather was sunny, which made everything even more beautiful. 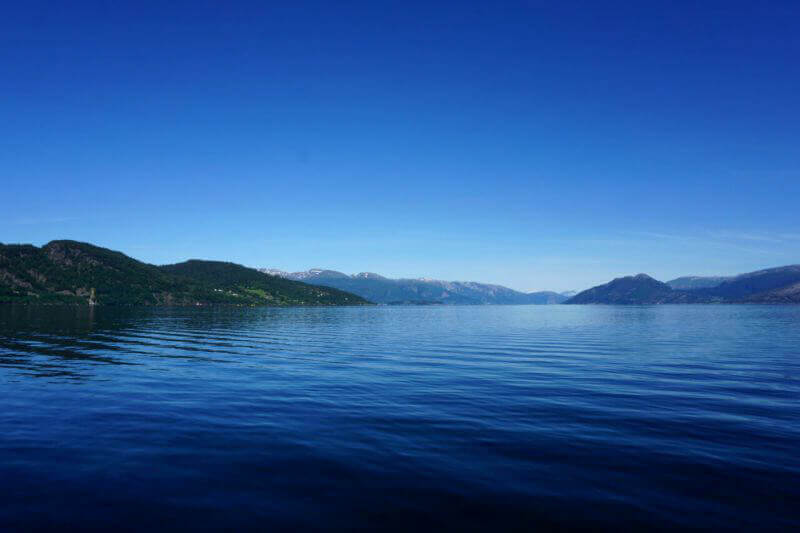 When we arrived in Odda, we got to the camp site, set up our tents and went for a walk through the town. Odda is a small town, but very nice. After we went for a walk in the town and came back to the camp, it turned out that Taras had a fishing rod, so some of the group members went fishing. And we went not for nothing, it’s necessary to tell. The result was several pieces of trout, which we ate in the morning and made very tasty soup from it. In the evening, after supper, the group got acquainted; each one told us a little about himself. All the participants (17 people!) turned out to be very interesting and nice people, which pleased me. 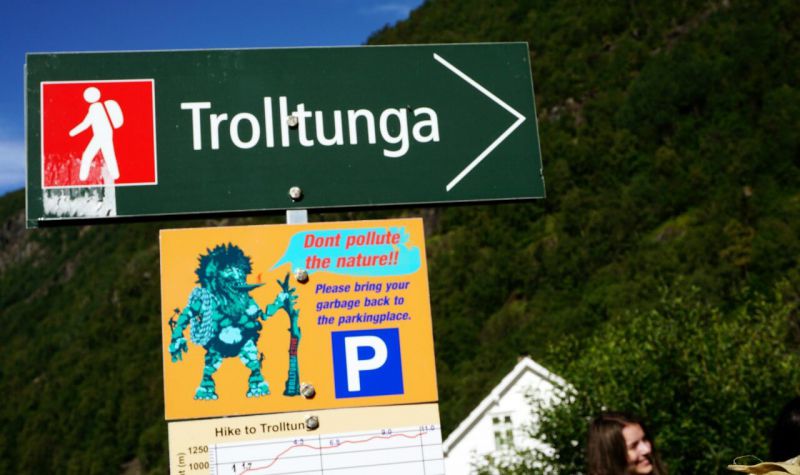 Before this hike I read a lot of articles, reviews and reviews about the way to Troll’s Tongue and many of them were not very optimistic, to put it mildly. They wrote about the practically steep slope, that many people went off the trail on this climb and other ah-ha-ha fears. Of course, I would never go on the former cable car tracks, but I didn’t need to. The group followed a beautiful stone trail where the views were unbelievable with each step up. 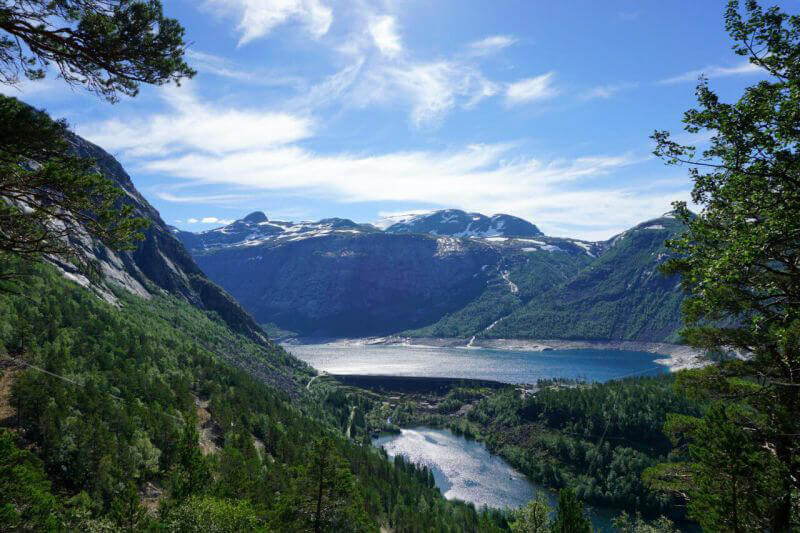 After the ascent, the worst thing began – a halt and lunch. Taras feeds a lot and very nourishing, so, having eaten a lot at lunch, it became much more difficult to go further. The closer we got to Tongue, the stronger the wind became. Gradually I put on both a windbreaker and a warm jacket, and still the wind was piercing my bones. But, we finally made it and went to the tourist lodge to drop off our backpacks first, and then to make new avatars. Being on Troll’s Tongue is not scary at all, it’s a little uphill and so it’s quite comfortable to walk there. After taking a lot of pictures, everyone went off to get calories for a very hearty dinner. Most of the group spent the night in the lodge, but there were some real campers who wanted to sleep in tents.

Day 4 started very badly for me. I think I woke up before anyone else and decided to go wake up my husband who was asleep in the tent. On leaving the cabin, I found something in between a very heavy rain and a downpour, with a terrible wind, cold, all gray, nothing visible around at all. Within 5 minutes I was completely soaked and frozen. Fortunately, by the time everyone woke up and gathered for breakfast, the weather had changed very dramatically for the better, the wind had stopped, and the rain was just dripping a little. Next, our way goes to Prekestulen. And personally I liked this place much more than Tongue. The view from there is much more picturesque. 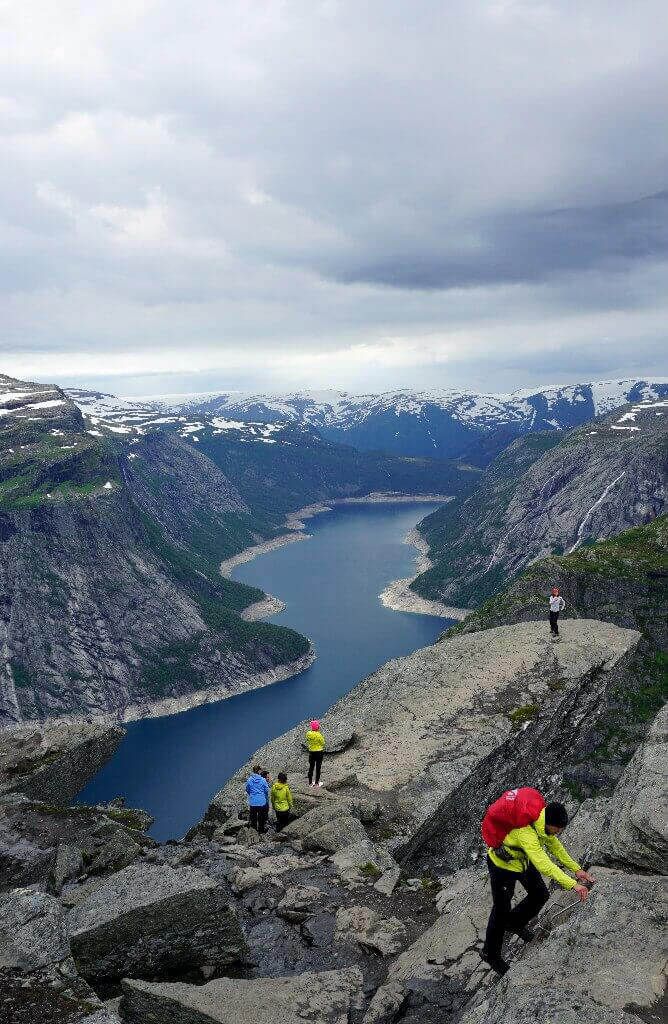 After taking a new batch of photos and putting on our raincoats, we moved on. The entire 4th day amazed me with the nature around us. Rocks, moss, and snow. Very ascetic scenery. Walking, snow creaking underfoot, silence all around and suddenly a dam with huge blue ice floes on one side! By lunchtime we came to another tourist lodge, which surprised us by the fact that there were even real dishes, linens and food. Having eaten an awful lot at lunch again, we moved on. In the evening we came to another tourist house, where a Norwegian with a granddaughter was already there. He was not very happy to see us, but we had to put up with it. The granddaughter was persuaded to try the lard, she did not seem to like it very much.

On Day 5, in the morning we leave the cabin and go down to Odd. On the way down I fall, slipping on the wet rocks, but all turned out fine. On the way there are blueberries and we certainly didn’t ignore this fact.  Then we were on the asphalt road again. Unfortunately, our bus failed to arrive, and we got to Bergen as best we could. Someone Taras caught a hitch, the rest called a cab. We got to Bergen late at night, quickly washed up and went for a hike. 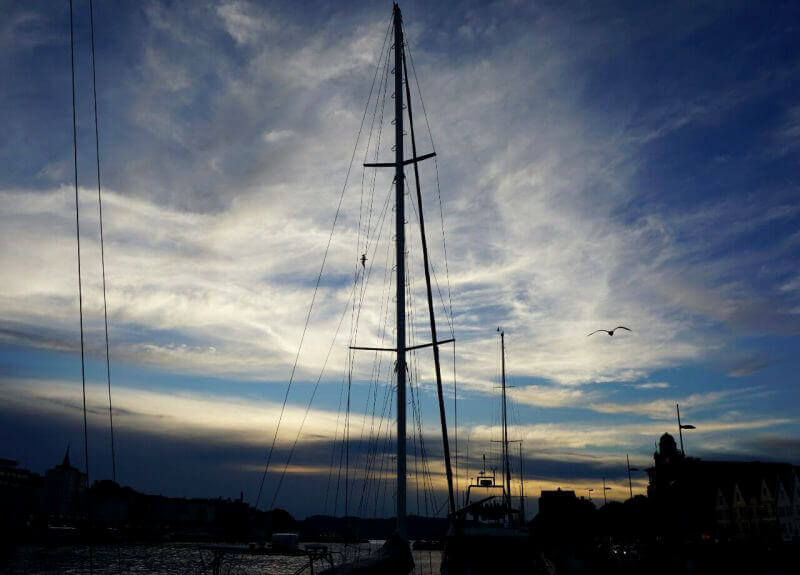 On Day 6, we say goodbye to the group at the hostel. Taras cooks everyone a delicious fish soup, and everyone goes for a walk around the city. I can’t write about the city, it fascinated me so much that it is impossible to describe it in words.

Many thanks to Taras, he is a great instructor. The hike was very bright and memorable!