Kilimanjaro, safari or Zanzibar - where is the better experience? Climbing Kilimanjaro, safari and Zanzibar
Africa
Author: Taras Pozdnii, Ukraine, Bila Tserkva
Teamleader: Taras Pozdnii
Overall rating
Teamleader rating
Manager rating
Many people dream of Kilimanjaro. I didn't. Moreover, I didn't plan to go to Africa in 2016. But one evening Marina and Tanya (Nepalese trekking participants) wrote to me and said they wanted to go to Kili. Without thinking long, I said yes. From that moment the preparations began. As a result, the girls went to Iceland, but the ascent to Kili also took place and went perfectly.

After studying the information, Umbwe was chosen as the final route for the ascent. It is popularly considered the most difficult, but in fact? I did not go on the others, so I can not judge. From the most popular Machame, it differs only the first two days, which takes place in the jungle all alone - it's appealing. After the ascent, a safari in Terengir and Ngorongoro is planned, as well as two days in Zanzibar.

But enough of the preface. From Kilimanjaro airport we got to Moshi. A town where it is customary to start climbing the highest peak of the continent. But where are the tourists? There are virtually none. There is nothing to do in the town, the cuisine is not good, the cafes are bad, there are no sights as well as exotics. As unusual and beautiful as Asian cities are, Tanzanian ones are depressing. With a lot of haggling we buy a 3g SIM card, which takes about an hour. We eat stewed bananas with beef - bananas instead of potatoes (not very tasty) and go to the hotel. Fortunately, there is a roof where we can gather and sit. We take a symbolic bottle of "Kilimanjaro" beer (our last alcoholic drink before our descent), I tell about the route and get acquainted. An interesting fact is that out of 8 participants 7 were in Nepal. And for Christine it was her first trip at all. 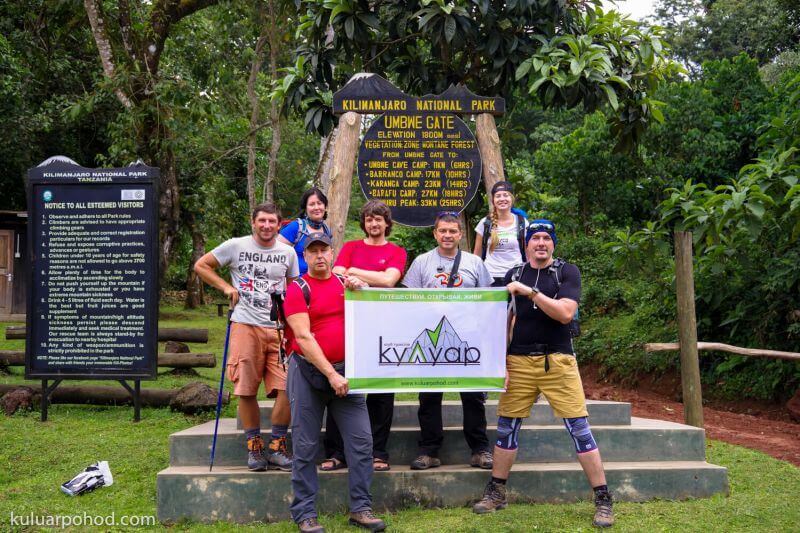 In the morning we move to the gates of Umbwe. I'm going with our porters - there are 15 of them in the car, plus food and gear. I had no idea you could fit so much stuff into a small bus. Upon arrival, a snack, a long process of weight distribution among the porters. We couldn't wait. 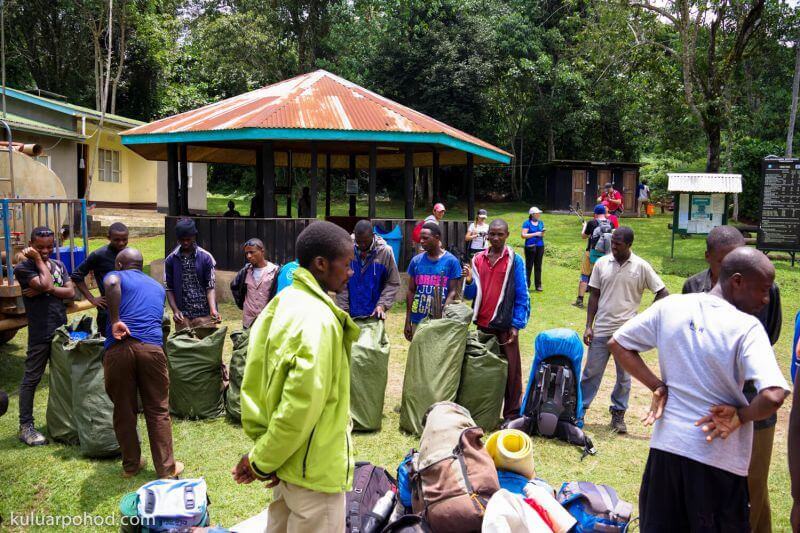 Yay! Finally, all the formalities are complete - we're out on the trail!

The first day is the longest in terms of kilometers (of those up) - 11 km. The trail is not steep, we walk in the shade among the jungle all by ourselves. It is pleasant to walk. Closer to the evening we come out to the camp of Umbwe, which is on the height of 2930m. We have dinner, share our impressions and go to sleep. 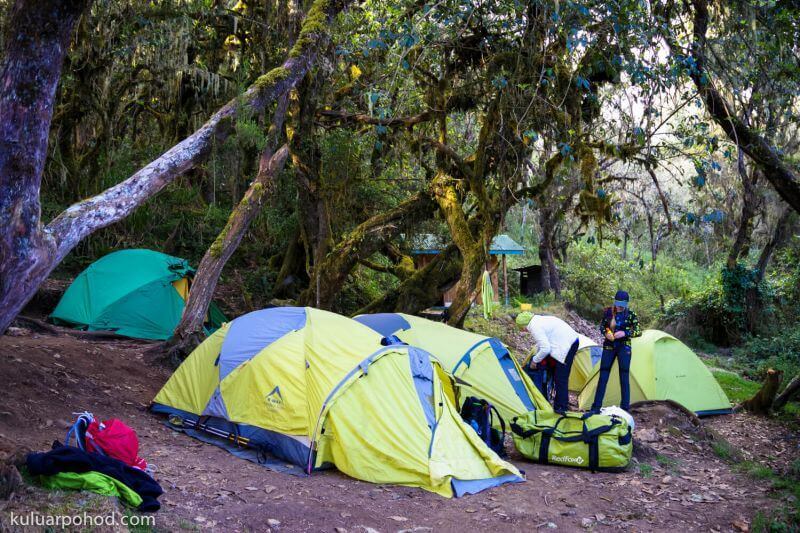 It's an unusual morning. Do you know why? A bowl of hot water for washing is waiting at the exit of the tent. It's wild. Breakfast is served. Today it's only 6km, which takes about 5 hours. The trail steeply climbs all the time, it's hard, but the distance is not too long, there is no hurry. Gradually we are leaving the forest zone and here they appear - the long expected senecia, endemics of Kilimanjaro. I was very much looking forward to these plants, they are very beautiful. 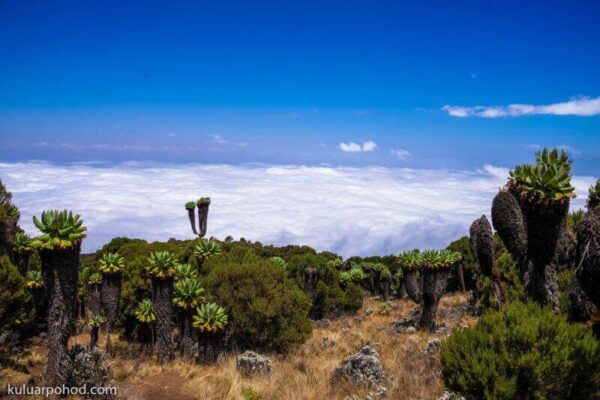 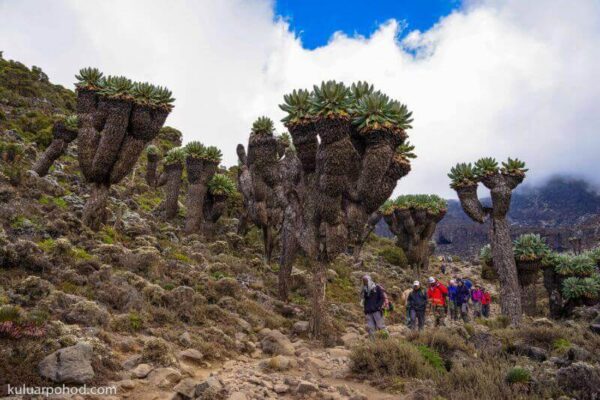 By one or two o'clock we arrive at Baranko camp, where most of the routes uphill converge, which means a sea of people and tents. You can forget about solitude till the end of the ascent. We have lunch and go for acclimatization hike. 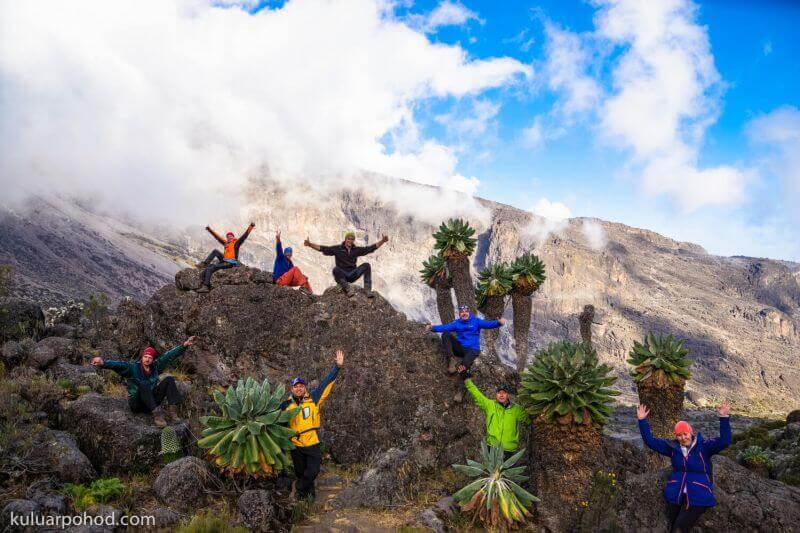 In the morning we are waiting for a "scary" obstacle - the Baranko Wall. This is a steep section with an elevation gain of 300 meters, the terrain is interesting - somewhere you have to climb a little bit. The main difficulty - the endless stream of tourists and porters, as a consequence of large traffic jams in the bottlenecks. We need to have patience and wait. You also have to be careful not to let the accidental bale fall on you from the head of porter running by the trail. Otherwise the two of you will fly far and long. 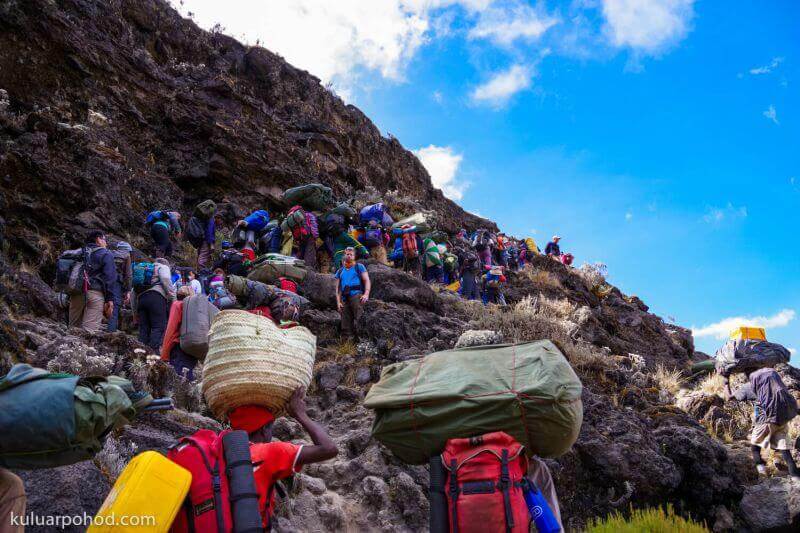 But now the wall is behind us, there is a level section ahead, then we overcome the gorge and we are in the Carango camp (4030m).  Somewhere along the route there is a breakthrough of the Internet, at these moments everyone is frantically trying to upload photos to Instagram/fb. It succeeds with difficulty. 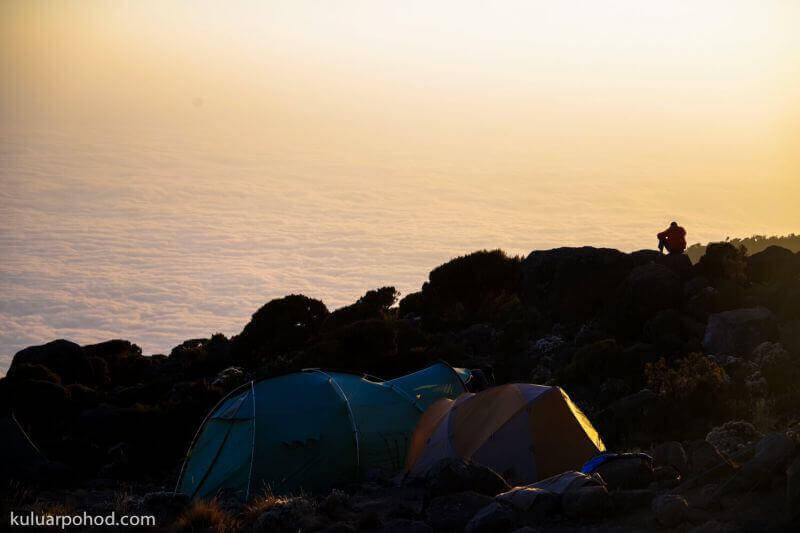 Another 4km of ascent and at 12 noon we arrive at the assault camp Barafu, altitude 4670m. 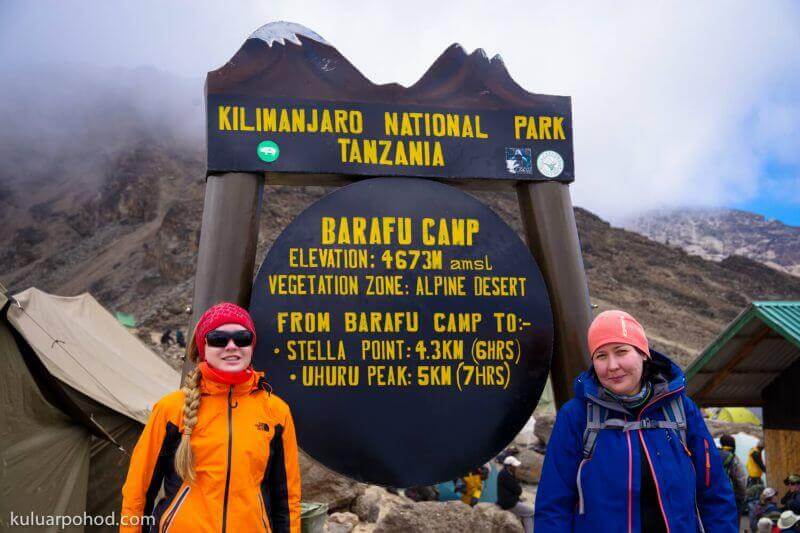 We go up to camp Kosovo for acclimatization, and then rest. Tonight we go to the summit. Yes, yes, such is the peculiarity of Kilimanjaro, that climbing almost 6000m takes place in the night from 4th to 5th day. Very forced, but it's actually the equator and the altitude is easier to bear. I did not manage to sleep before the ascent. At first I was thinking, and then the porters in the neighboring tent started making a lot of noise. Very angry, but what to do. We drink tea and leave the camp at 00.10. The weather is great, I can't think of anything better. The big moon shines on the trail so you can walk without a flashlight. There's no wind. Ahead and behind us are chains of lanterns - the same climbers and their guides. There were 7 of us with 4 local guides on the ascent. We were going very slowly, but even at this rate sometimes we outrun other groups. There are a lot of people on the trail - maybe up to a thousand. It is hard to walk, constantly going up. It is cold. You even put on warm clothes and socks for Everest, but your legs and hands are getting cold anyway. Dmitriy had some problems with his heart, and at an altitude of 5150 we decided to stop ascending for him. His health is more important. One of the local guides went down together with Dima. Christina gives up little by little. This is her first hike and she did not expect that such a scorcher would happen in this world. Mentally she is not ready and she is freezing cold. We are still at 5500m and after 10th her request to descend I decide to let her go with the second guide. It is enough for the first time, she is a good girl. 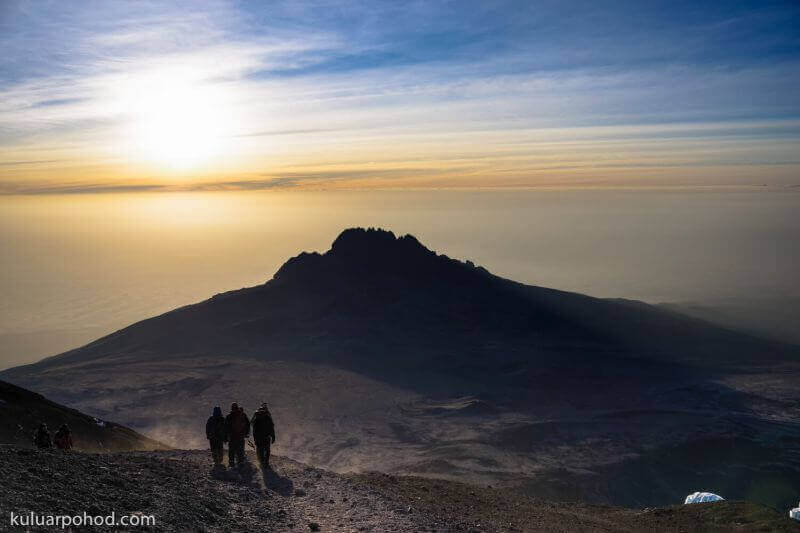 There are five of us left, and in this five I am sure. Step by step we crawl first to Stella Point and then to Uhuru Peak. On the way up the local guides sing upbeat tunes - it adds energy and joy. They are good girls. The hardest is the last 150 meters. The aim is already visible, but it is still one hour away. You are surrounded by the famous ice of Kilimanjaro, but the feeling is kind of vague. But you're confident. You know for sure that you will make it. Sooner or later.

In fact, everyone got through this section very quickly. We were at Uhura at 7-7:20. I would like to mention Vladislav, who is 57 years old. Last year he climbed Everest with me and this year he climbed Kili. I wish that were true for everybody! There was a long line of those who wanted to make a commemorative photo. We spent about half an hour on the summit - the sun was already out and it was not so cold, so we could enjoy the scenery. There is no snow on the mountain, but the ice is beautiful. 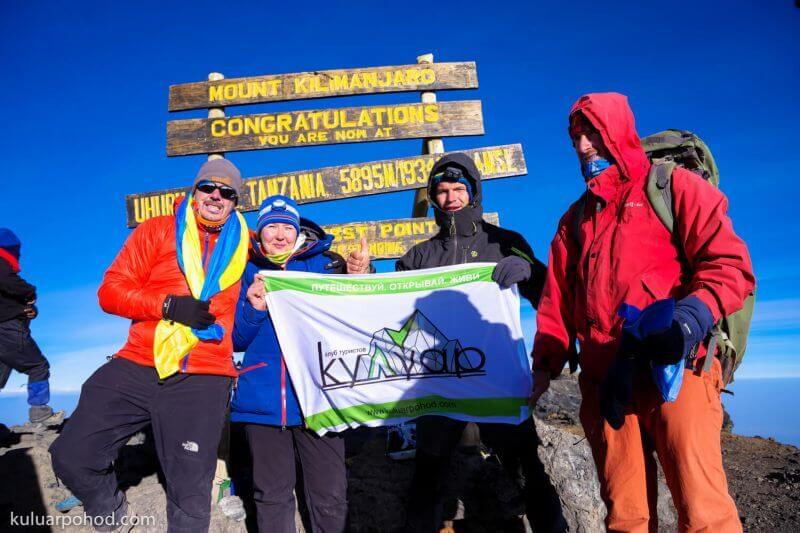 There are two reasons to go to Kili - the "tick" and the ice. We descend without adventures, an hour for rest and further down. Today we dropped as much as 3100. The morning of the last day of ascent was very cheerful! There is a tradition, on the last day all the groups have their porters and guides sing songs. Of course, this is Hakuna matata and a couple of others. The whole morning here and there the upbeat chants could be heard. Here comes our turn - all 22 escorts gather in a clearing and start singing and dancing. It's really fun and energizing. They try hard, because they get a good tip today. Guys are good, I really liked the way they work. Picture to remember. 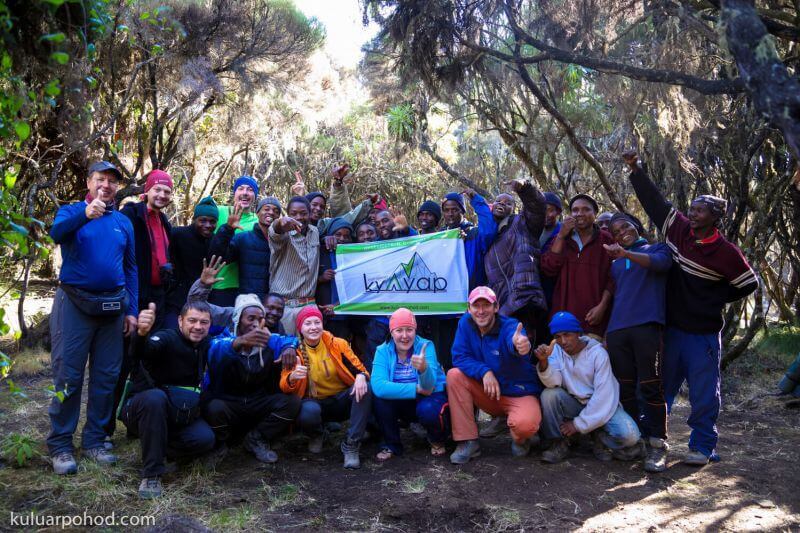 We go down to the exit and go to Arusha, which is a city of millions, but in fact is a dump like Moshi. It's okay, we only have one night here. In the morning, a big jeep arrives under the hotel, we load into it and drive to Terengire Park - the first day of the safari will take place here. There are a lot of animals and a lot of baobabs in the park, we had a lot of fun looking at them. They are really huge trees. 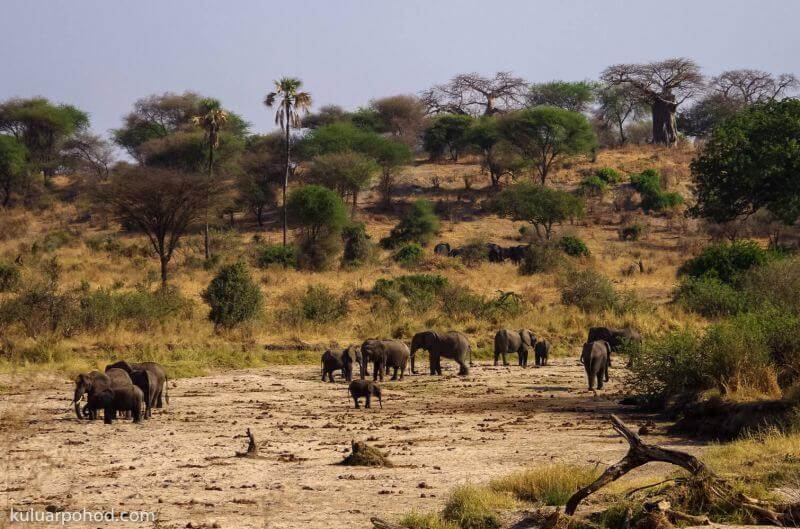 In front of the gate to the park there is a Maasai tourist village - here for 50 dollars you will dance, make a fire, allow you to take pictures and show everyday life. Of course, we paid - it's fun and interesting. 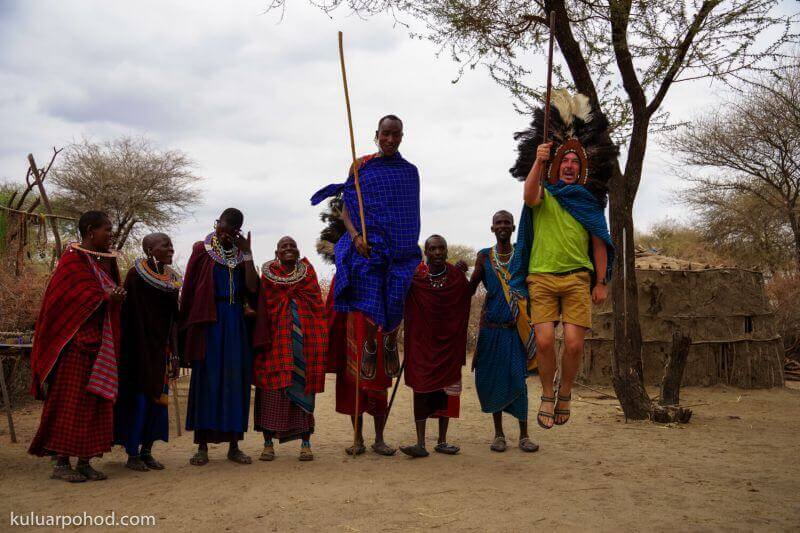 The second day of the safari is the Ngorgorgoro crater. Absolutely unique place, a UNESCO heritage. The crater is 19 km in diameter and 600 m high walls and is a haven for many thousands of animals. Antelopes, zebras, lions, buffalo, elephants, hippos, birds - everything was abundant. Only the rhinoceros was not seen. There was a moment when several dozens of cars gathered shouting "rhino", but I personally did not see it. I had already seen enough of it in Chitwan (Nepal). 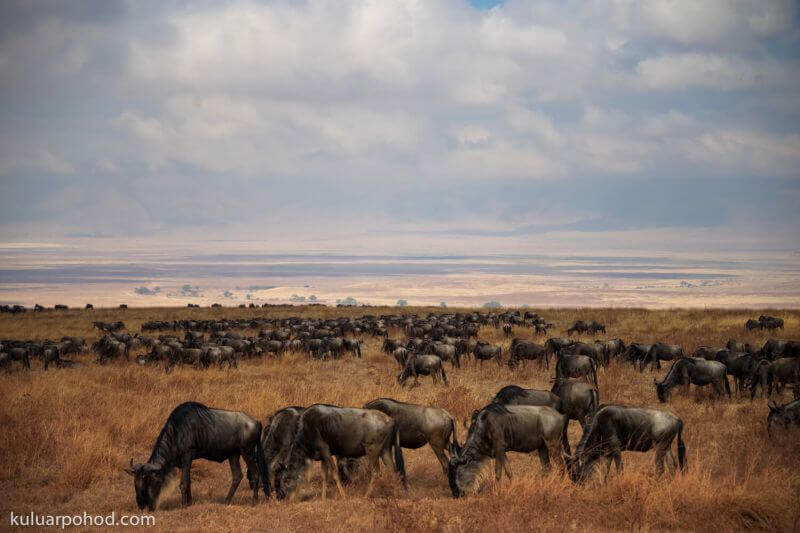 What is remarkable about safaris in Africa is the complete indifference of animals to humans. It's as if you don't exist. The lioness lazily walked up to our jeep and lay down right under my front door. 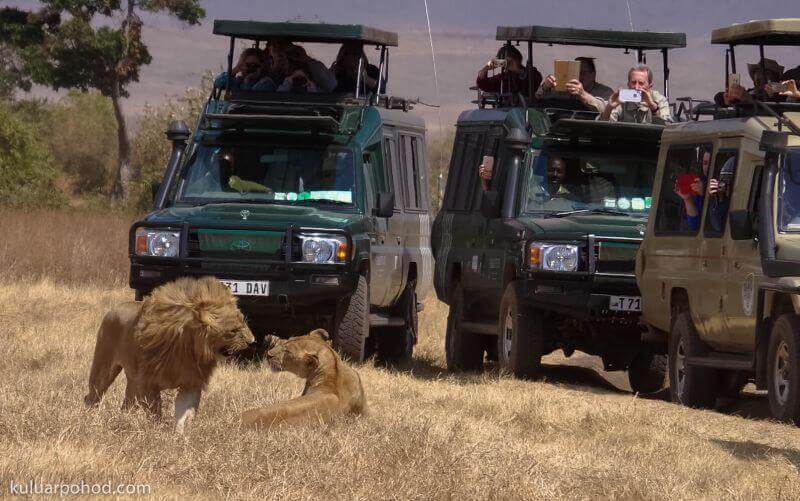 If you want, you can stroke it with your hand or open the door and poke it with your foot. Of course, I didn't do that. Zebras graze a meter away from the car, and a passing antelope can be reached with your hand. And there are many similar examples. Only hyenas ran far away and chased antelopes. 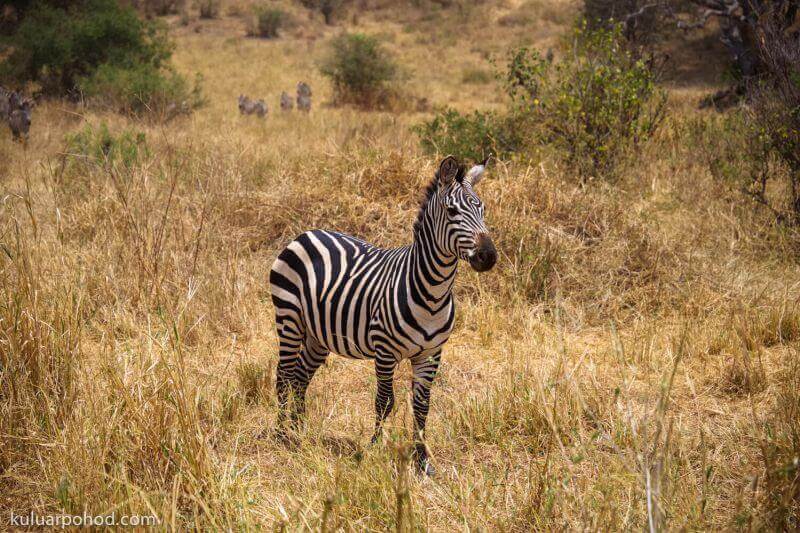 We enjoyed the safari very much, it was unique! On the way back, on the asphalt road, we met a stray elephant and a giraffe. Funny.

Another night in Arusha and a morning flight to Zanzibar - a miracle island, easy to live on.
I really liked it. The quaint cottages in the villages, the countless thickets of coconut palms and bananas. And the ocean! White beaches with the finest sand, warm and clear water with dolphins swimming in)) 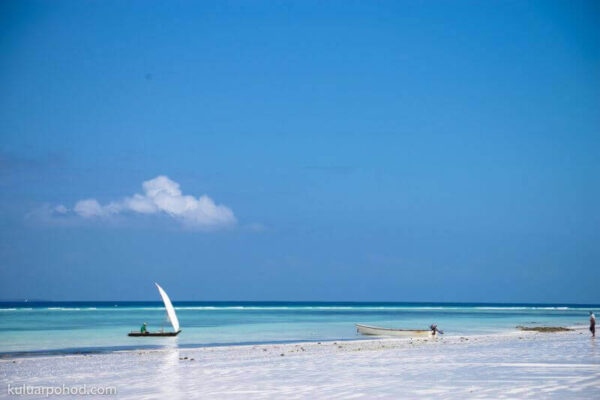 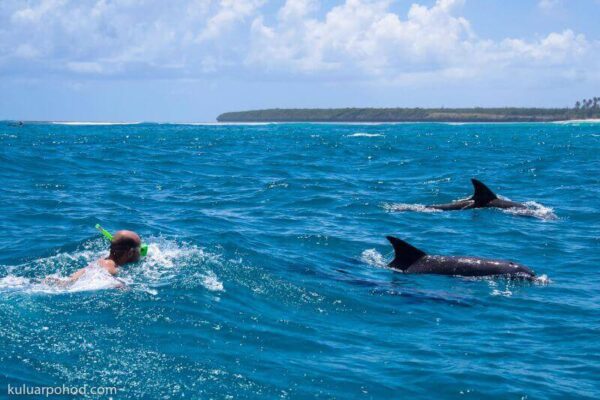 One thing - a lot of sea urchins, you have to be careful, or it will take a long time to dig out the needles.

Zanzibar was a great final chord of our trip to Tanzania, but it was not Kilimanjaro, but Ngorongoro safari that brought me the most impressions. I will go back to Africa again soon, only this time I want to go to Kenya with the peak of the same name and a safari in Massai Mara.