How I decided to go and visit the trolls Troll's Tongue Trek - hiking in Norway
Norway
Author: Stepanenko Olga, 26, Ukraine, Kiev.
Overall rating
Teamleader rating
Manager rating
Norway met us with cloudy weather and a temperature of +16 ° C, but it did not spoil the impression of this wonderful country, whose beauty you can admire from the plane window.

Money can be exchanged for kroons immediately at the airport, but the rate is unprofitable. There are exchange offices in the city. Plus they take a fee for the exchange, regardless of the amount. To change a small amount is very unprofitable. When exchanging you must keep the receipt and present it next time, then the commission is not charged. You can pay with a bank card almost everywhere.
I took the “Flybussen” bus from the airport to Bergen. Very easy and fast. Departures every 15 minutes every day. The way from the airport to Bergen takes on average 30 minutes. One way (round trip) ticket costs 100 (160) kroner (about 11 euros). The ticket can be bought from the bus driver. The bus has wi-fi and space for luggage.
By public transport to get by several times cheaper, but longer, and in my case, the time was necessary to save, because the trip is only 6 days.

Our group was quite large – 17 people. In the evening we went for a walk around town and look for a place to have dinner, because the prices at the fish market were just outrageous. We tried a delicious fish soup in a cafe not far from the center. I went on the trip sick, with a fever and a sore throat, so I decided to order some more tea. It was the most expensive tea I ever had! ) After dinner, we took a walk along the Bryggen promenade, a bright old promenade made up of colorful wooden houses. It looks very beautiful. In the houses are souvenir shops. Bergen – a cozy and colorful town with a rich history and traditions, people are very friendly. There are many museums, parks, cable car. At this time in Bergen, the light is late, so you want to wander and wander and wander. But we have to go to bed, because tomorrow is the responsible day and departure to the start of our route.

Early in the morning we left Bergen for the city of Odd. The trip took about 3 hours. The road is very scenic, colorful houses with moss-covered roofs, neat courtyards, tunnels, which the Norwegians prefer instead of bridges, so as not to spoil the natural scenery. 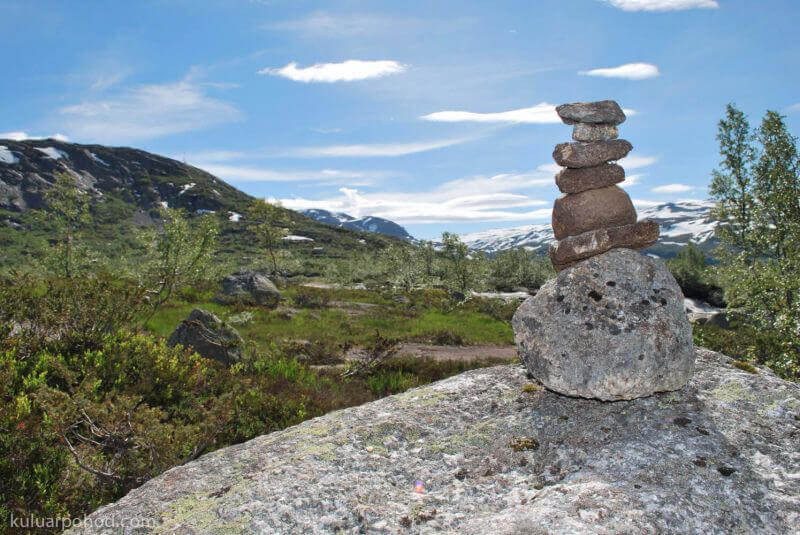 Our road went through the ferry crossing. After crossing the fjord, we arrived in Odda and went to Odda Camping. In my mind a campsite is a cabin with minimal amenities, but it turned out to be just a clearing where you can pitch your tents. It’s free and you can leave all your stuff unattended without fear, no one will touch them. The campsite is on the coast close enough to town. After setting up camp, we went to explore the town itself. 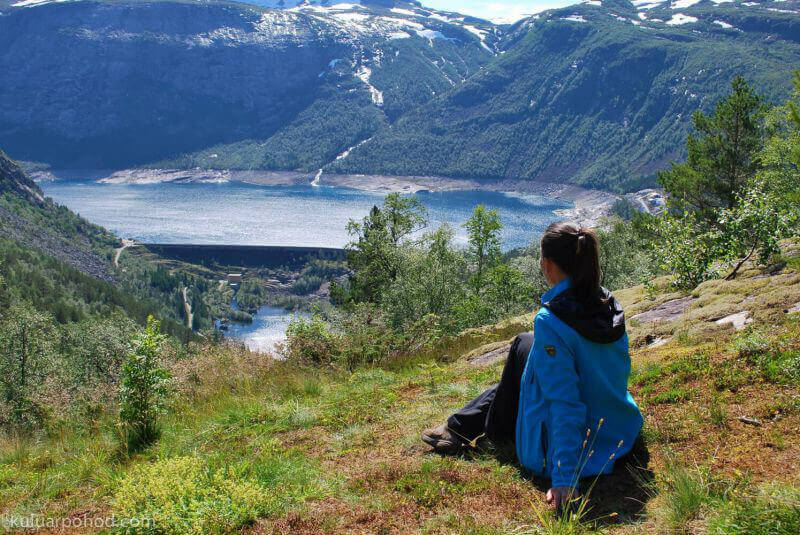 Odda is a small town, very quiet and peaceful, in the vicinity of which there is the Folgefonn Glacier, the third largest in continental Norway. Near Odda there is another unique natural creation – Troll Tongue (Norwegian: Trolltunga) – a rocky ledge on Skjeggedal Mountain, towering above the lake Ringedalsvatn, which was our goal. 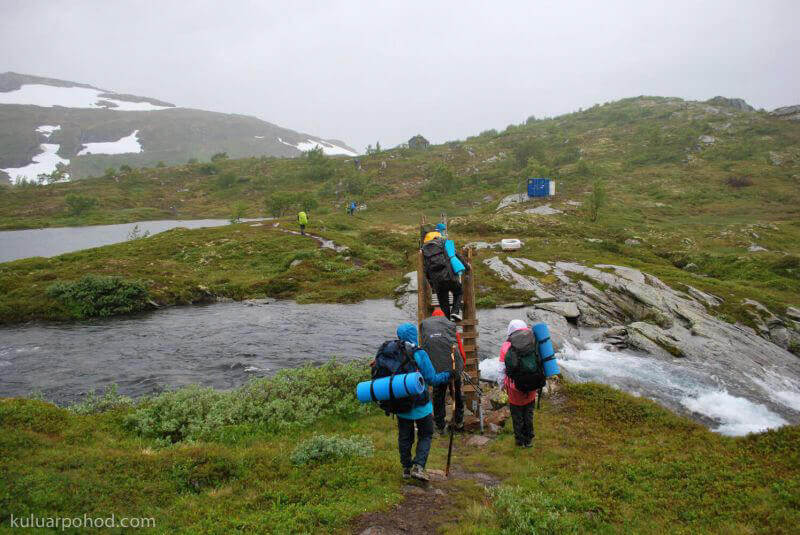 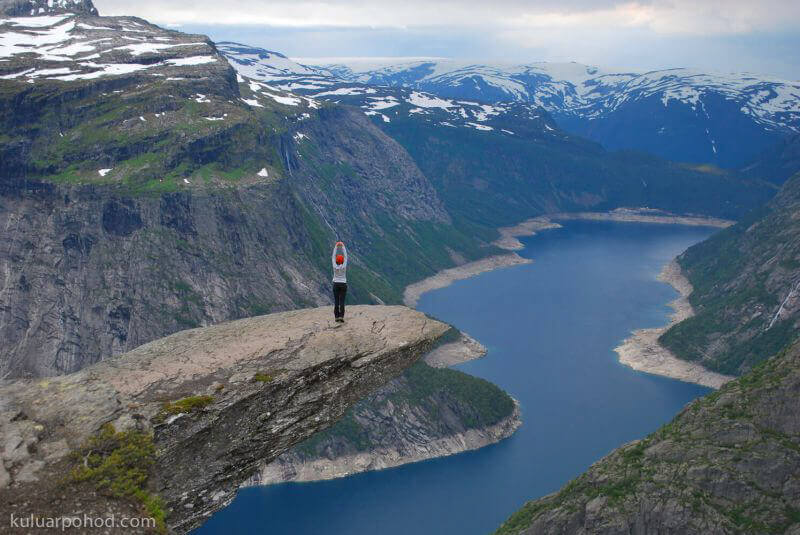 A 20-minute bus ride from Odda is the town of Tussedale, where our route to the Troll’s Tongue began. From the bus stop to the start is 7 km up an asphalt road. How frustrating when you’re hiking with that heavy backpack, trying your best, and you get overtaken by some local Norwegian who’s out for his morning run. Wow. The Norwegians, it turns out, are a very athletic people. And there’s another 11 kilometers to get to the Troll’s Tongue. 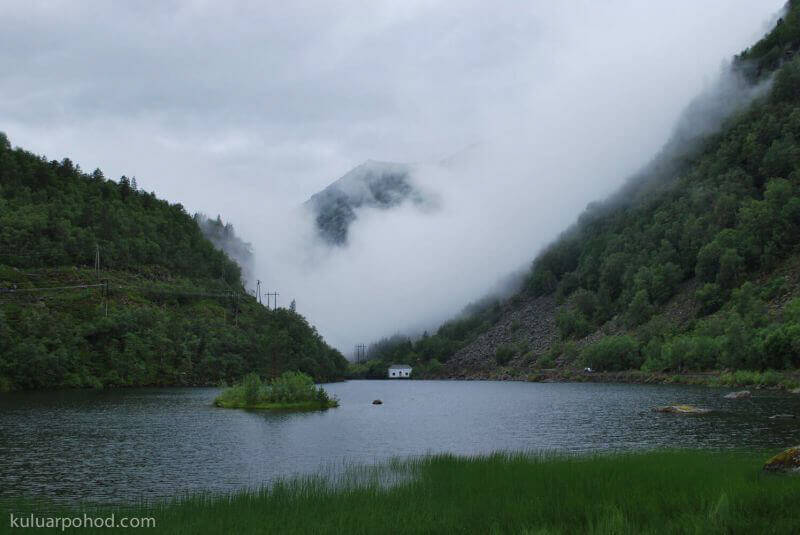 The first two hours of ascent are the most difficult, because you have to climb up huge rocks on an almost steep slope. There are streams along the way where you can get clean mountain water. When you stop to take a breath, you realize how amazing the beauty is all around. 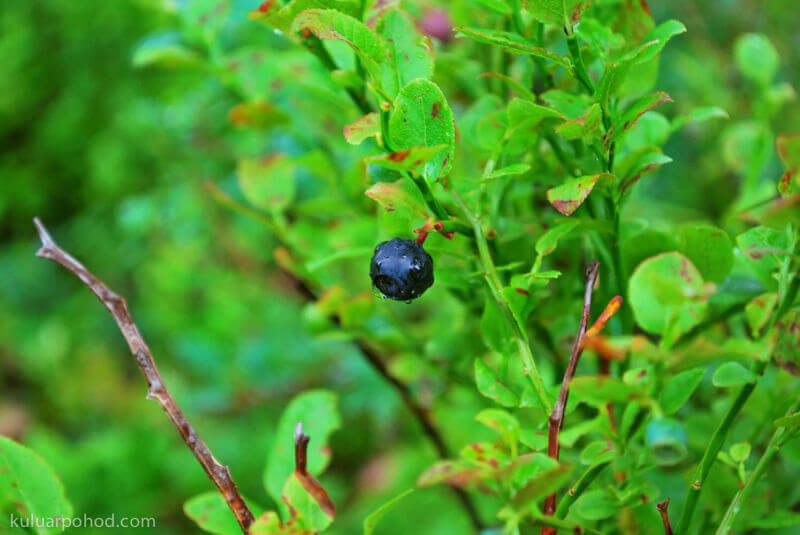 It is very difficult to get lost. All the way is marked, there are signs, on the rocks there are red letters “T”, at each kilometer there are signs with the distance covered and the remaining kilometer. There is no cell phone service along the way.
When we reached a huge rocky plateau we stopped for a lunch break. But we were all so tired that we just threw our backpacks and lay down on the rocks to regain strength. We had only one thought in our heads – the main part of the route was still ahead. The more so, the weather disposes to hiking feats. 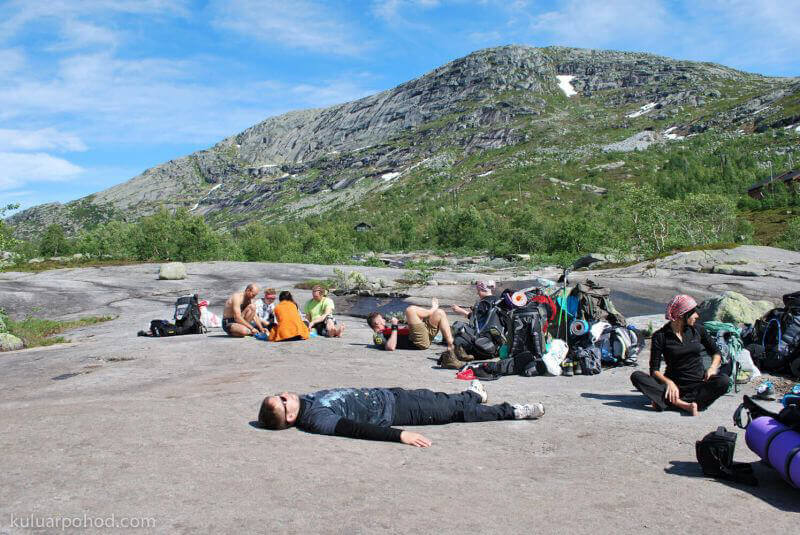 By evening we finally “crawled” to this unusual island of rock, from which an unreal view opened that is impossible to describe with words, it is necessary to see with your own eyes! The number of pictures taken there is also difficult to put into words. Everyone perverted themselves as they could. Someone was jumping, someone was lying, someone was on his head, on the bridge, and someone was even photographed with a laptop, and even on a chair. But that’s not all, our lovely Nisso decided to dance right on the edge of the tongue in a long summer dress. It looked fantastic.
Not far from this place is a wooden tourist cabin, where we spent the night, hiding from the cold and piercing wind. 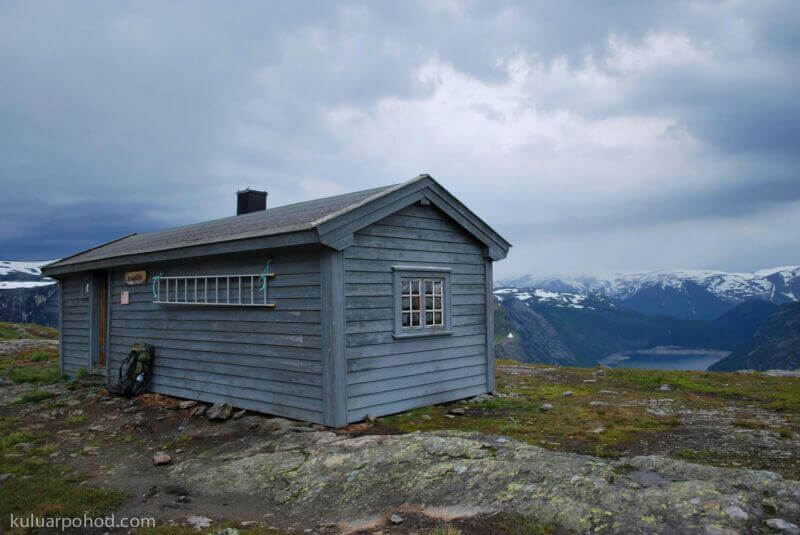 The nature in Norway is stunning – picturesque fjords, cliffs, the height and shape of which are breathtaking, valleys, a huge number of rivers, lakes and streams. Such landscapes give a sense of freedom and give a lot of time for reflection. The morning passed over a mug of hot tea and enjoying this view.
Then we continued on to Preikustelen Rock, overhanging the fjord, which offers a magnificent view. It’s simply mesmerizing to behold. 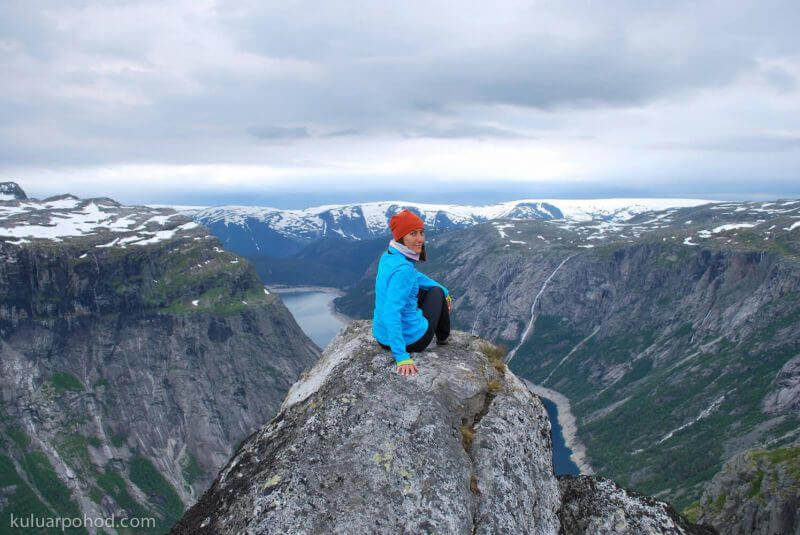 The weather that day turned bad, it was raining, and we had a long 20-kilometer hike ahead of us. Armed with raincoats and raincovers, we jumped over streams, passed several beautiful dams, crawled over slippery rocks, fell, sank in the snow, and descended on our heels from snowy peaks, but it was worth the ordeal. 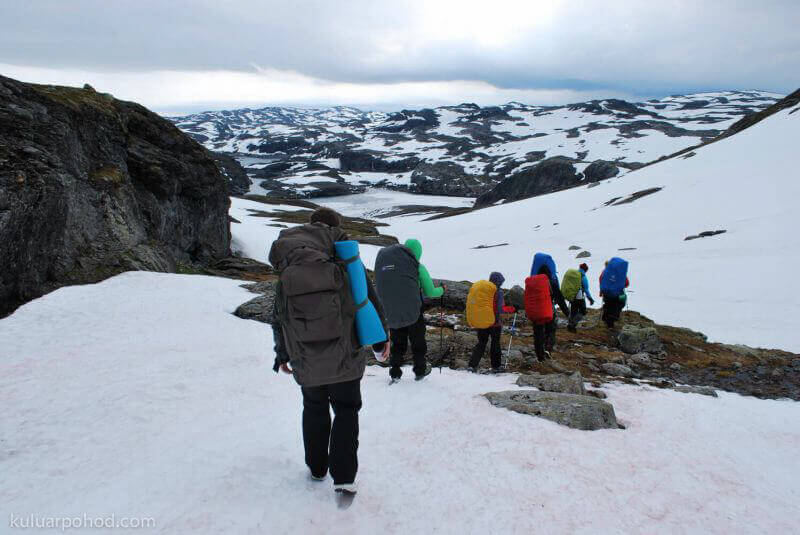 By evening, all muddy, we made our way to the next cabin. What was our surprise when we saw that it was occupied. Fortunately, there were only two people – a Norwegian grandfather and his granddaughter, and the house is roomy enough. So, there was room for all, however, someone had to sleep on the floor, and a few people decided to spend the last night in the mountains in a tent. Apparently, my grandfather did not expect to meet such a large group, but in the evening he got to talking and tasted buckwheat and bacon for the first time in his life with pleasure. There was a stove in the cabin, which helped keep us warm and dry. 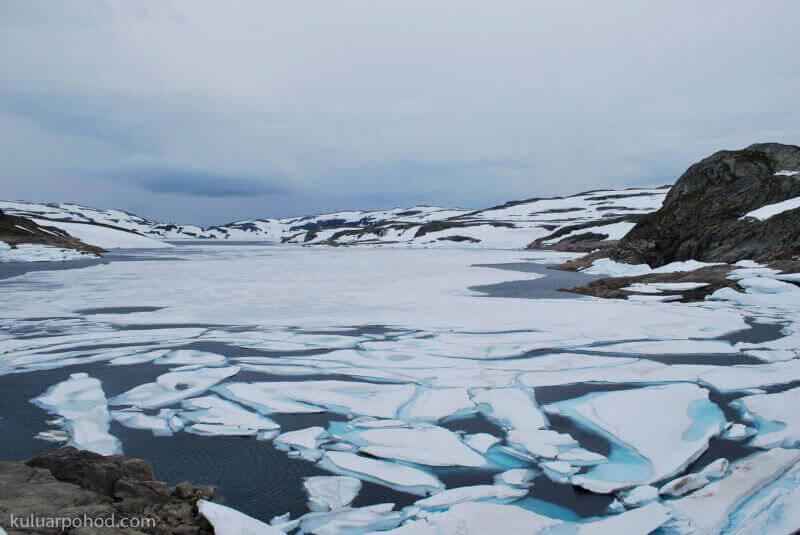 On the way there were a lot of blueberries and mushrooms. When we went down, we got a surprise – our bus did not arrive according to schedule. Why? It remained a mystery. We were convinced this is Norway, everything is clear here. To get to Bergen we had to take another bus with a few changes with a ferry. But we were not upset about it, there was just no strength left, my feet itched, my whole body hurt. Tired but happy, we got to civilization with hot showers late at night. 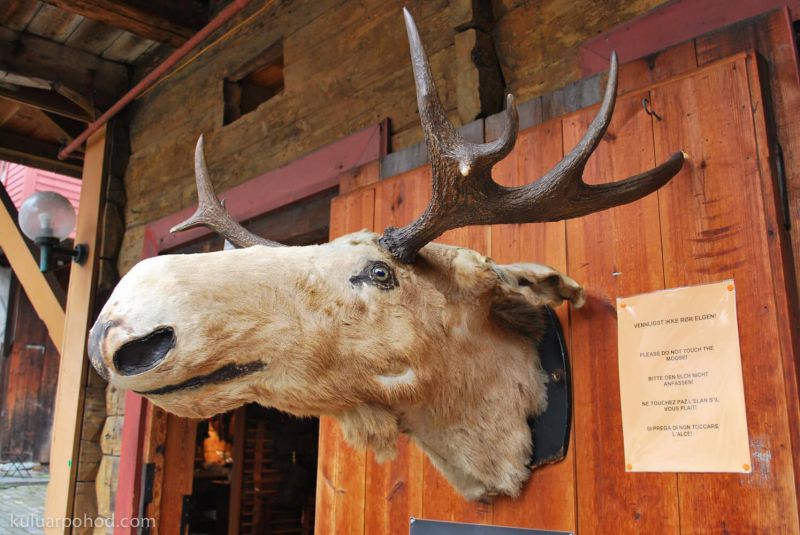 Someone stayed in Bergen for another day, and someone after buying souvenirs, went home. But the impressions of those places capture still!
P.S. Norway – a country of trolls and elks, although the latter to see the live and failed, only on the magnets and t-shirts, eh)
Good luck to everyone who wants to visit this beautiful and unusual country!