THE BEST TIME TO CLIMB KILIMANJARO

Kilimanjaro is a legendary peak which thousands of people climb every year. But only 2/3 of them reach their goal. One of the reasons for the failures is bad weather, which makes the ascent significantly more difficult and causes many to turn back.

In this article we will tell you about the weather on Kilimanjaro and which months are the best for climbing this famous volcano.

Features of the season on Kilimanjaro

Mount Kilimanjaro, like the rest of Tanzania, is located almost on the equator, so the average monthly temperature throughout the year varies slightly (the variation is +-5 C). There are no seasons that we are accustomed to. Instead, in Tanzania there are rainy and dry seasons, which differ significantly from each other in the amount of precipitation. Theoretically, you can climb Kilimanjaro all year round, but it's much more pleasant and easier to do it in dry, sunny weather. 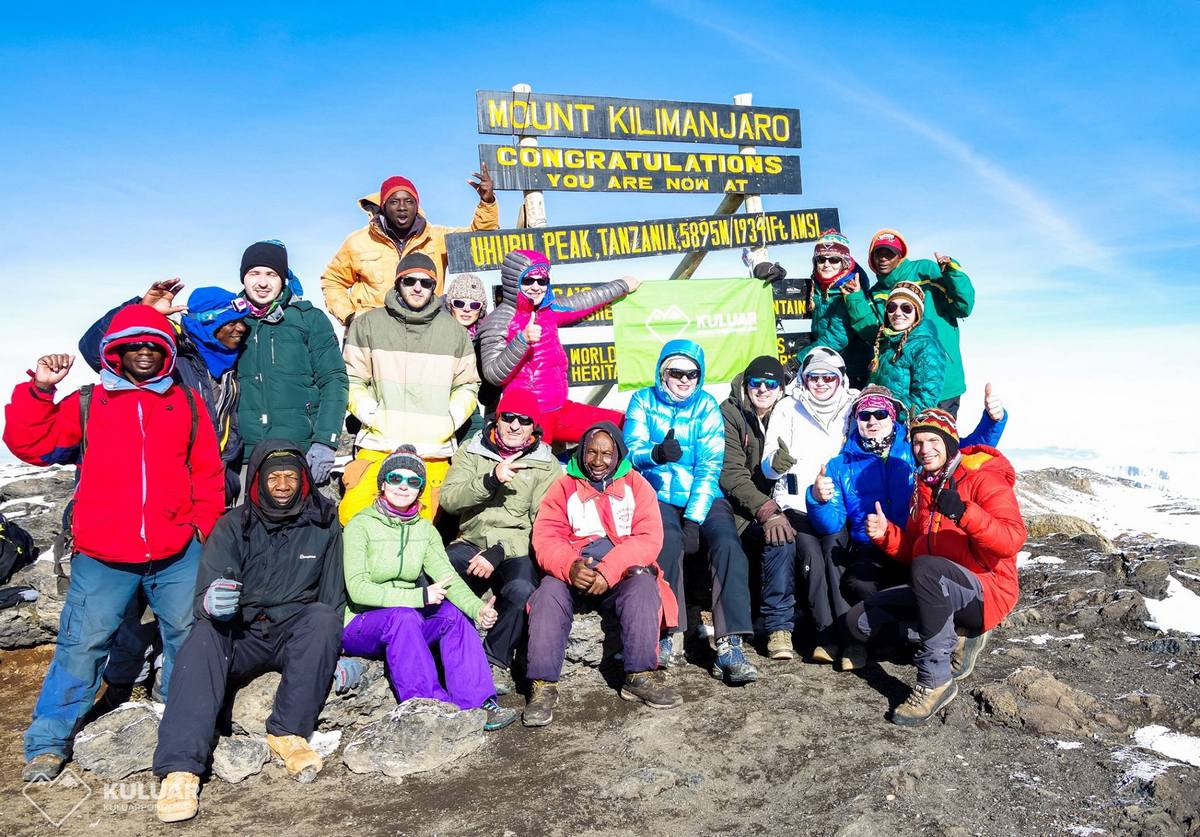 Consider each of the seasons on the mountain in the context of climbing conditions.

When is the best time to climb Kilimanjaro?

You should understand that on Kilimanjaro, as well as on other mountains, the weather can change sharply, and a sudden downpour may overtake you at any time of the year. But there are still certain climatic regularities, which should be taken into account.

The second half of winter and the beginning of spring are the perfect time for climbing Kilimanjaro! In addition, because of the low cloudiness the visibility remains high, and climbers can fully enjoy the beautiful scenery around them. Also in these months it is more likely to catch snow at higher altitudes. It can make climbing more difficult, but otherside can make it even more beautiful and atmospheric. There are a lot of tourists in these months, but still less than in the summer. 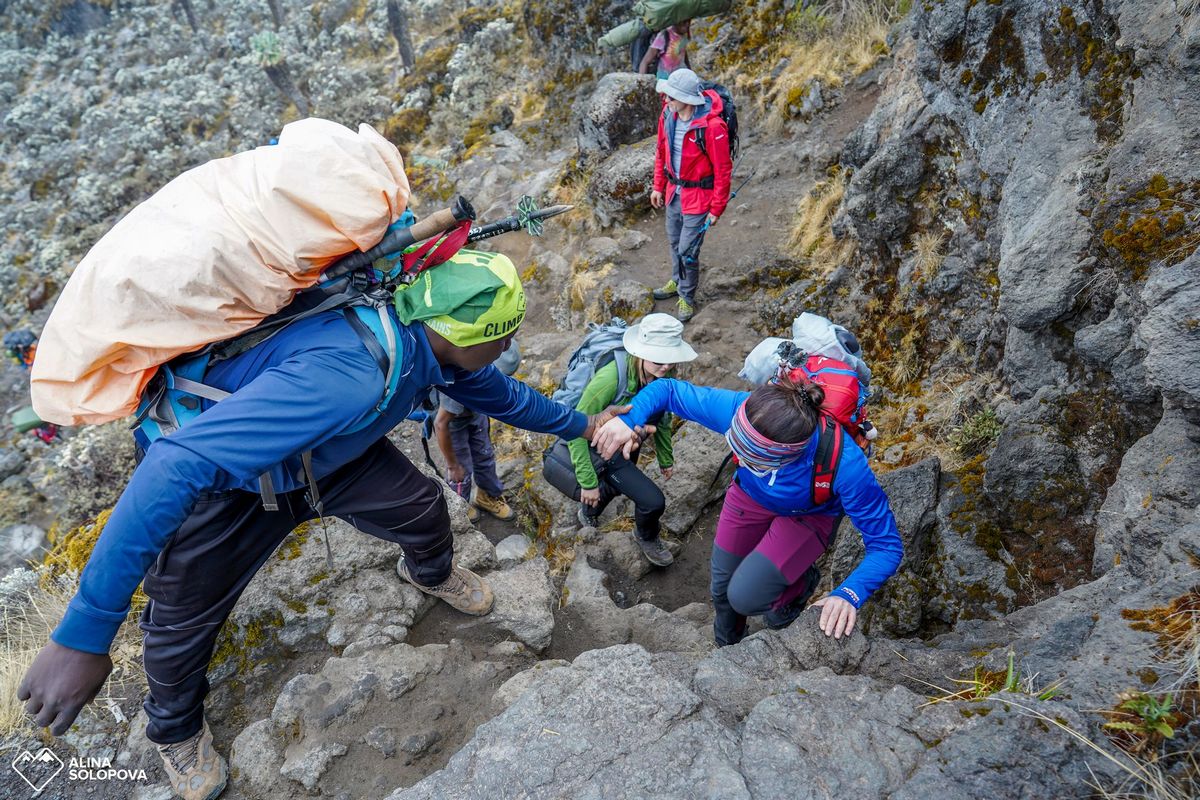 The period from late March to late May, with a peak in April, is the big rainy season on Kilimanjaro. Southeast trade winds coming in from the Indian Ocean bring showers and thunderstorms to Tanzania. At this time in the jungle you will have to wade through deep mud, and above the forest area you will be constantly soaking in lingering rains. Your clothes will absorb moisture and just won't have time to dry. With low temperatures at high altitudes, this will make climbing even more difficult. Don't count on stunning scenery during these months - you won't be able to see it because of the constant clouds and fog.

If you can afford a trip to Tanzania only in April, we recommend the Rongai route: it goes along the northern slopes of Kilimanjaro, which are considered drier. 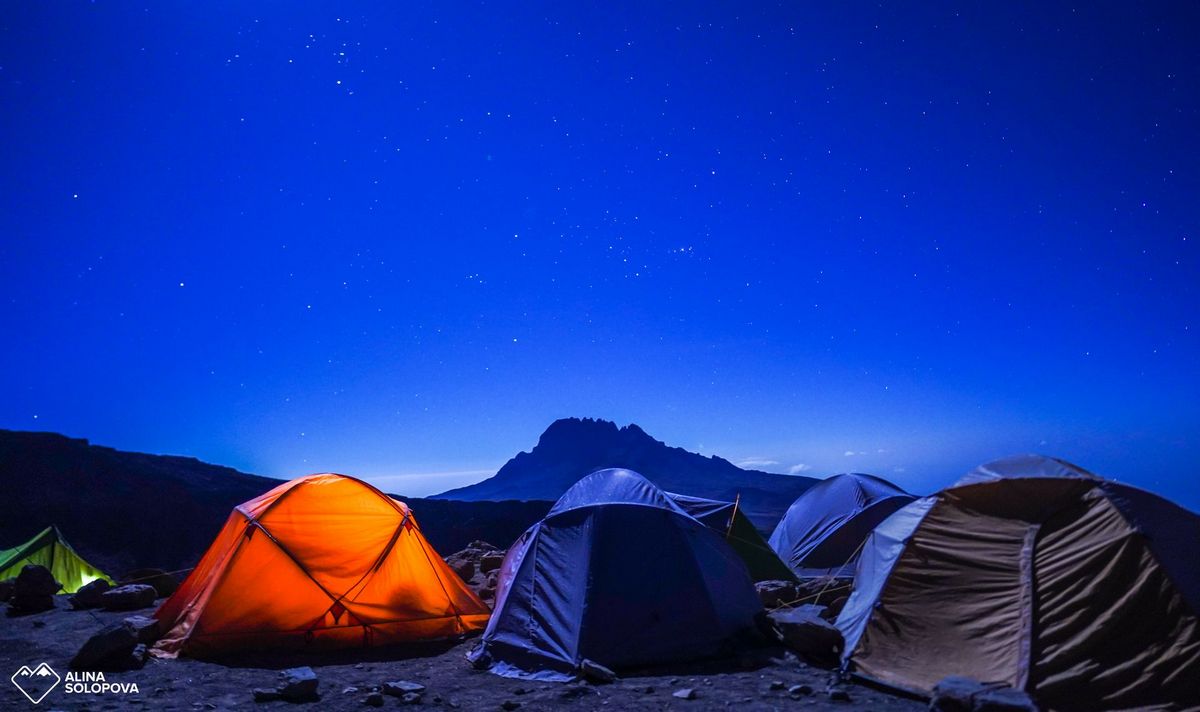 The only plus of the rainy season on the mountain is the minimal number of other climbers.

The summer months are another great period for climbing. During this time the amount of precipitation is minimal, which attracts crowds of tourists from all over the world. In some places you will have to literally stand in traffic on the trail. If you don't want that, try to plan your climbing for June or late September because most vacations occur in July and August and there are especially many people here.

October is another good month, but the chance of rain increases, especially towards the end of the month.

The last month of fall is the second, "minor," rainy season on Kilimanjaro. In contrast to April, the rains in November are usually less prolonged and begin most often in the afternoon. But it may rain till early or even mid-December, so if you are going to Kili at this time of the year, take care about your outfit. There are far fewer climbers in November than in the dry season, which will be a plus for those who like quiet and solitude. 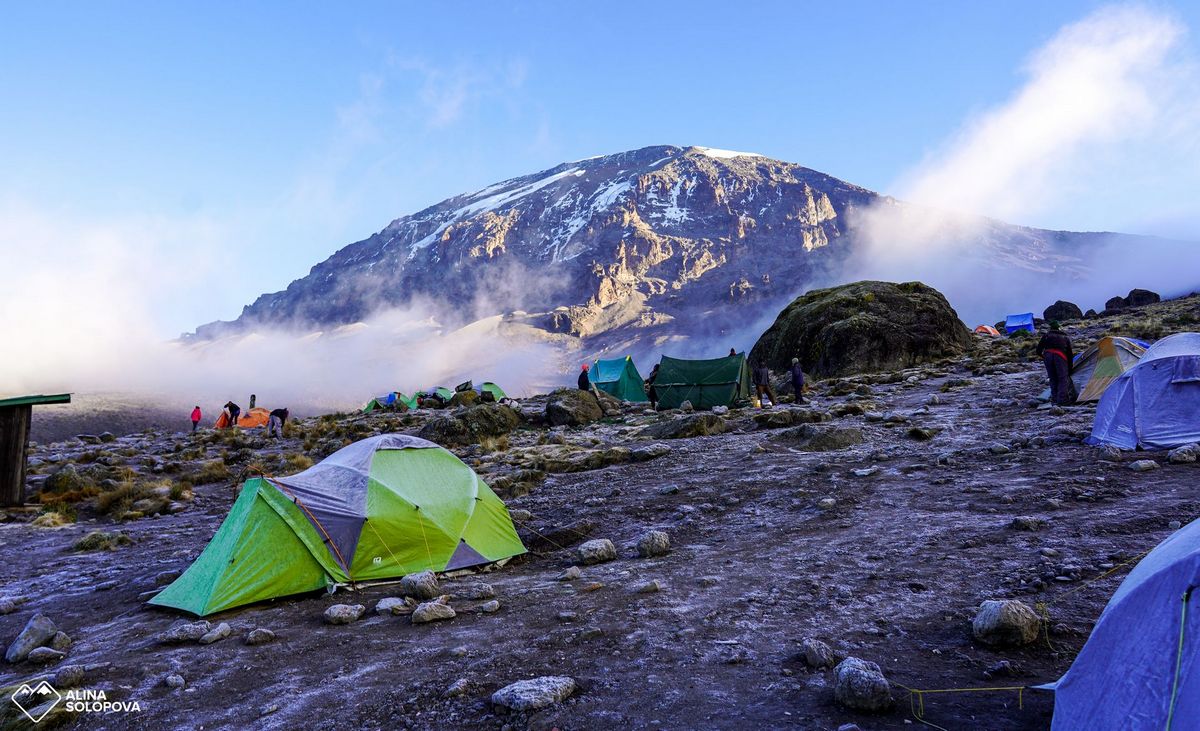 In December the weather stabilizes, but the chance of precipitation remains significantly higher than in summer and early fall. Tourists also become much more numerous than in November. The peak of visitors to the mountain is during the New Year holidays, when many tourists can afford the long journey and fly to Tanzania.

What are the temperatures on Kilimanjaro

The temperature on Kilimanjaro is not determined by the time of year, but by the altitude zone. In a few days, travelers have to climb from 800 meters above sea level to almost 6 kilometers. This route passes through five climatic zones, and the higher you climb, the lower air temperature will drop. 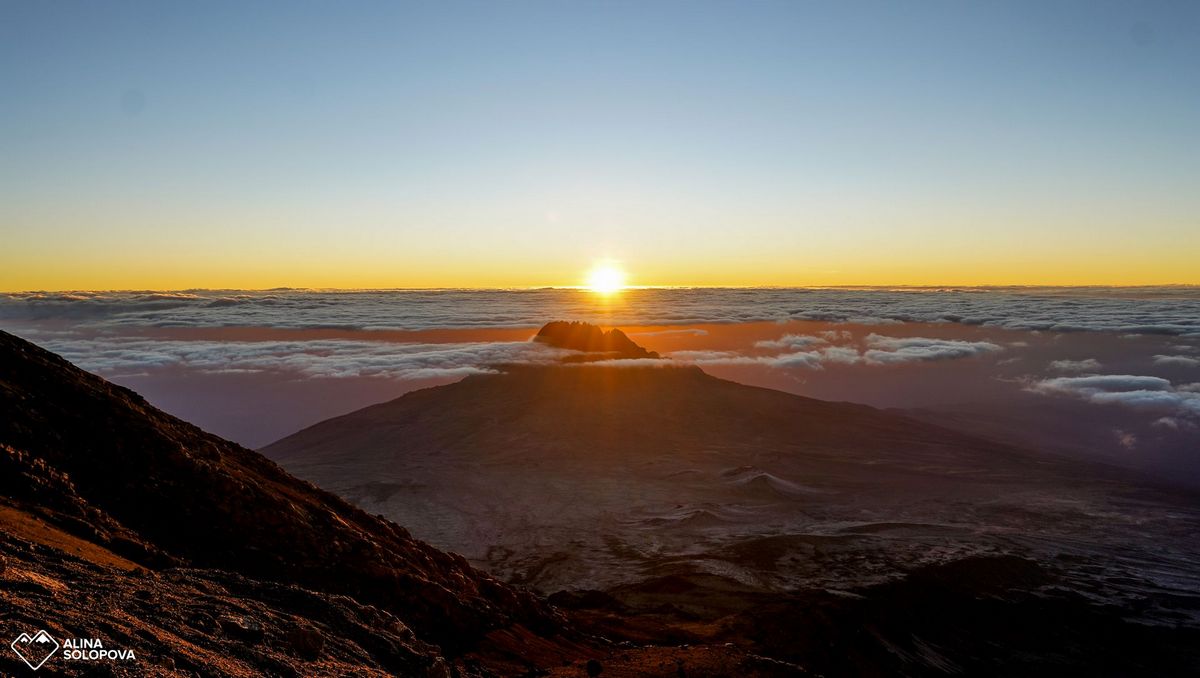 Not unreasonably climbing Kilimanjaro is often compared to the road from the equator to the North Pole, so different are the conditions at different heights. Let us consider them in detail: 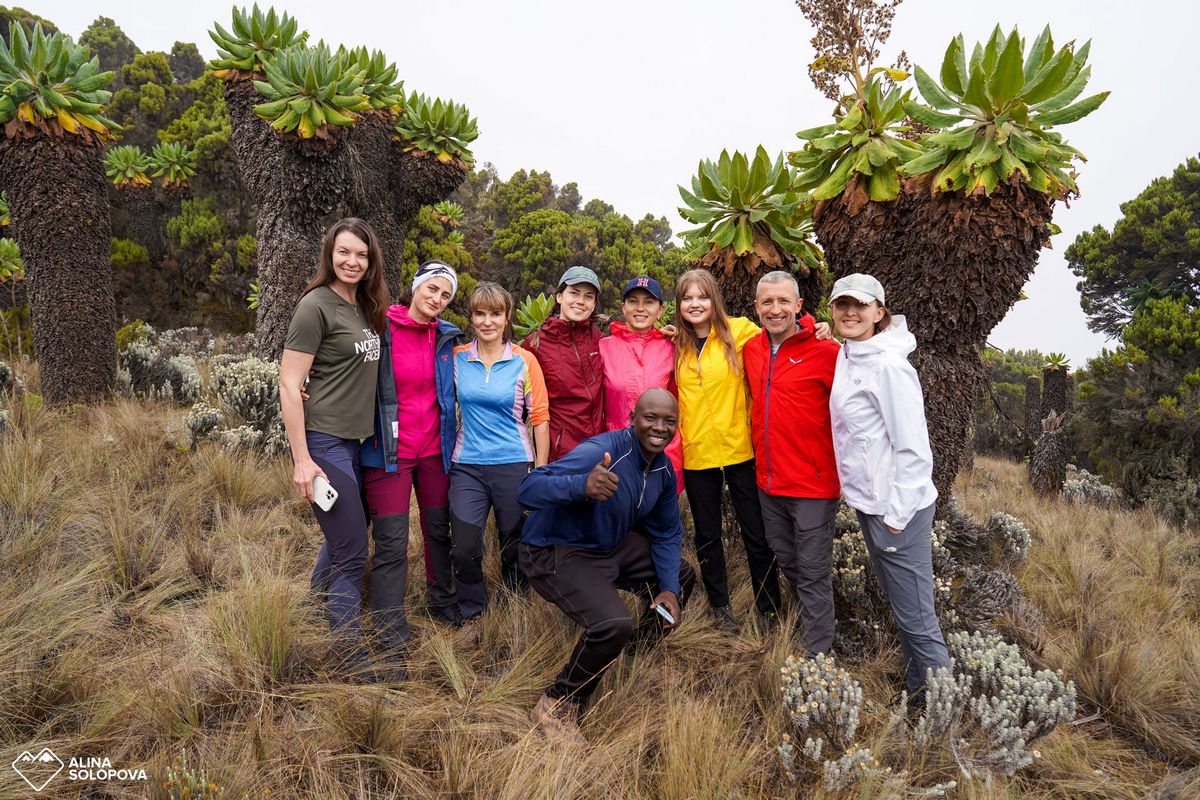 Well, now you have all the information you need about the best time to climb Africa's highest peak. Take a look at our routes: