Why are you going to the mountains? Climbing Kazbek
Georgia
Author: Lilya, Ukraine, Kiev
Overall rating
Teamleader rating
Manager rating
The desire to climb to the top of Kazbek arose in August 2015. I climbed Hoverla, and in the evening of the same day I began to read the impressions of an acquaintance about how she tried to "conquer Kazbek".

Climbers, by the way, cannot stand the word "conquer," and in this I completely agree with them. What does the ability of a handful of people to crawl to the top of a mighty mountain have to do with conquering?

One way or another, it didn't work out for my friend. She vividly described all the difficulties she had encountered on the route, her physical condition, her worries about not having reached the goal - and her intention to try again in the future.

It came to mind:

Where does a bad idea start? - It seems simple. I can do it.

Where does a good idea start? - It seems interesting. I have to do it.

I've been meaning to visit Georgia for a long time. And since my interest in cities has somewhat waned after all my wanderings, it was nature I was drawn to.

"I chose Kuluar because, first, it was recommended to me by my environment (my boyfriend knows Nikita Balabanov, who has already won the Golden Ice Pick, and a colleague has been on several hikes with this company); second, the date of the climb to Kazbek approached me, and I had time to reserve a place in the group. 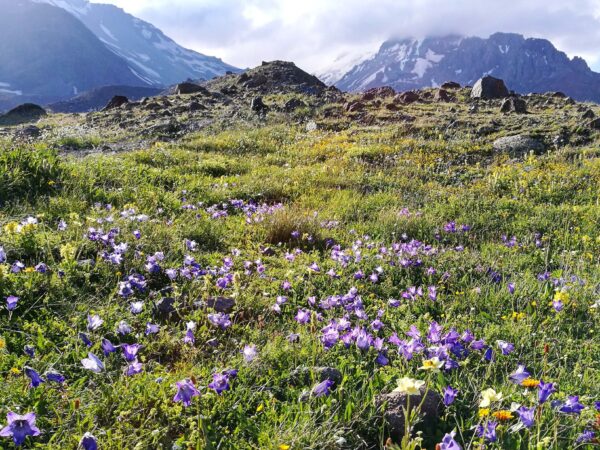 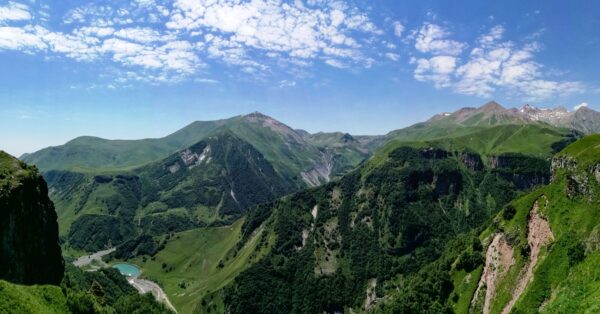 "Knowledge is the beginning of doubt."

After talking to the few people I knew who had made the attempt to climb Kazbek, I began to wonder. All the doubts I had were related solely to my physical condition. I had been running for about seven years, at a good pace and for good distances, but as the manifestations of altitude sickness could be very different, there was no certainty that at high altitude my body would not start doing funny tricks.

I read several articles about preparing for climbing. What I did:

No other aspects of climbing bothered me, because I either couldn't influence them (weather conditions, for example) or simply didn't pay much attention to them (discomfort of living in a camp after the comforts of civilized life). For me the main thing was to develop endurance, to prepare myself, because on the route it is very important to be able to keep the general pace of the group, especially when the movement in bundles begins. How you are going to feel during the hike will help the guides to decide whether you will make it to the summit or stay in the camp.

I have a piece of advice for those, who want to make the ascent (first of all for the beginners), to take care about outfit gathering, and especially - about choice of hiking boots! How comfortable you feel in your shoes will set the tone for your overall well-being.

Personally I bought used shoes, because shoes should be comfortable and worn, and never regretted about it - for the entire trip did not rub a single blister.

A list of things you should have with you, there is on the site. Carefully go through this list, clarify again, what must take, and without what you can do. I, for example, found that the helmet - is not must, but the thermos - a thing at the height is very useful.

Also realized that it is extremely important to provide everything you need in advance, so that the last day before departure not to rush about renting and shopping for missing items. Believe me, it only seems that there is enough time: the closer the time of departure, the faster the minutes fly by.

And it is better not to consider the option of renting some things on the spot, at the beginning of the route: believe me, the prices will surprise you very, very much - and it's not about a pleasant surprise. 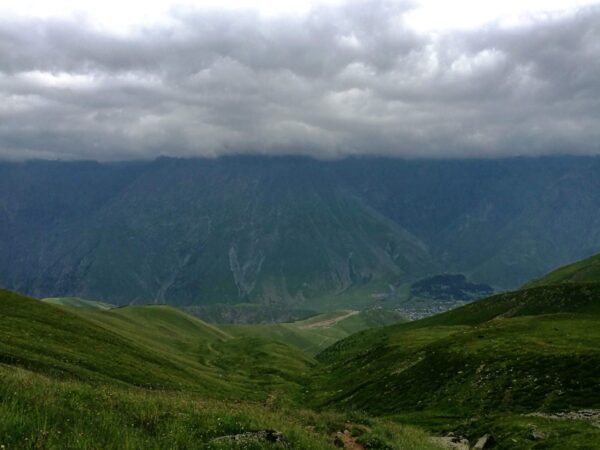 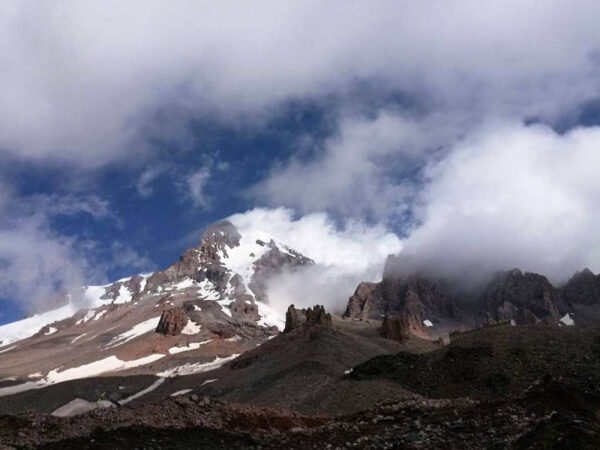 Our group met in the lobby of the hostel we had chosen for our overnight stay in Tbilisi, the evening before we left for Kazbegi.

We got acquainted, discussed some organizational issues, and went to dinner. At the restaurant we got to know each other better, learned what climbing experience each of us had, and simply had a good time.

I remembered a phrase I read on the Couloir website, "bad people don't go to mountains," and I mentally agreed with it. Of course, each of us has his own character, his own personality, but this did not cause a negative.

The next morning we left for Kazbegi.

Georgia is an amazingly beautiful country, it seems to me, no one has any doubts, everyone has heard about it to a greater or lesser degree. But it is better to see it once. Several times along the way we stopped because the scenery that we were encountering was simply stunning.

That day we camped out not far from Trinity Church and slept overnight there to start our trek across the saddle in the morning.

Jumping ahead, I'd like to say that for me personally this crossing was the most difficult, much more difficult than the ascent to the summit.

First of all, we carried all our belongings and equipment by ourselves. This was my "baptism of fire")), because I had never before walked with such a heavy backpack, and more importantly, incorrectly assembled.

Your guides are sure to tell you that each, even the smallest space backpack should be filled - socks, gloves, anything. And things in terms of weight must be distributed correctly to avoid the right or left side roll when you walk. But I didn't know everything then that I know now). 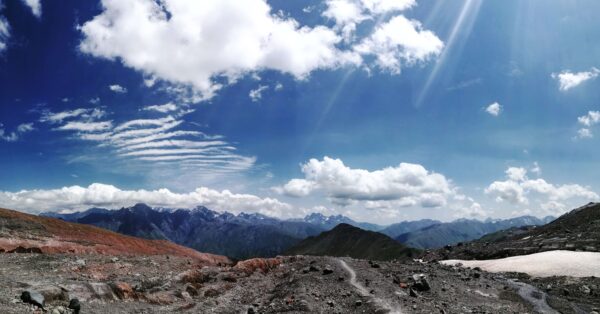 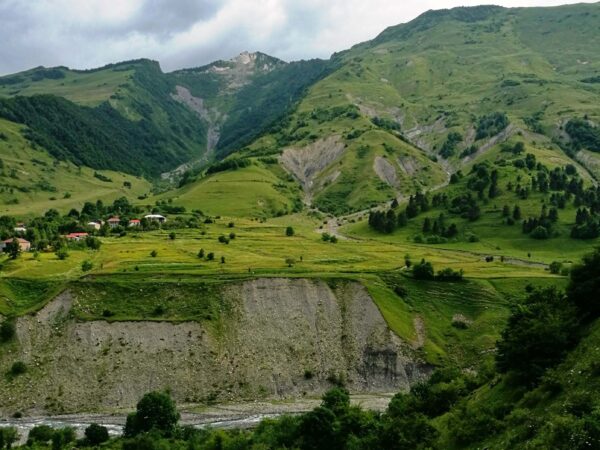 Secondly, the slope itself is quite steep, it is a long climb, and in the heat, under the scorching sun, with the weight behind you, it is really difficult.

However, the view from the top of the saddle and the beauty of the valley, where you go down to camp, will be worth all the effort, believe me!

On this day and the next one we got used to the camping life, got used to cooking with gas burners, and had a personal experience that any food after our "walks" is delicious)). We also made a trip to the glacier, where we practiced using safety harnesses, walking in bundles, using an ice axe and an ice drill.

Our first guide was Pavel Kirichek, an experienced mountaineer, able to explain clearly and distinctly, what and how to do. He was almost always calm and patient - which certainly was not easy, considering the ratio of his experience to our ignorance of the basic things for mountain climbing). Personally, I am grateful to him for the science), for the fact that without nerves and ridicule, he could tell you everything and advise you how it would be better. The second guide, Yuri Bugai, is younger.

After leaving our camp at the so called "green spot" (an area where grass and flowers grow), we walked across the Gergeti glacier to the weather station and then to our assault camp (3,800m). Nothing grew there anymore, there were only stones around, but when we came out of the tent in the morning, we could see clouds floating somewhere below. It was amazing to live on the shore of the sky! 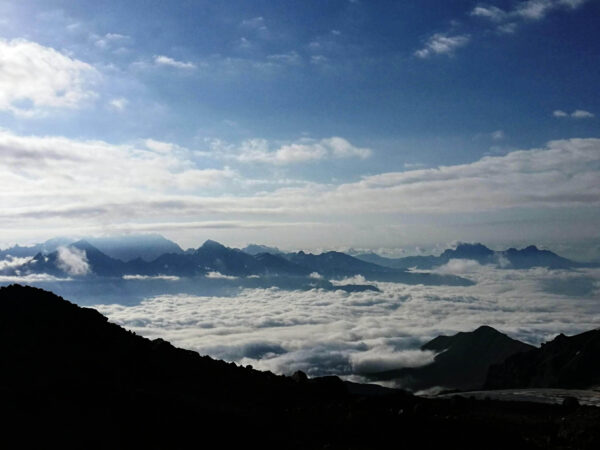 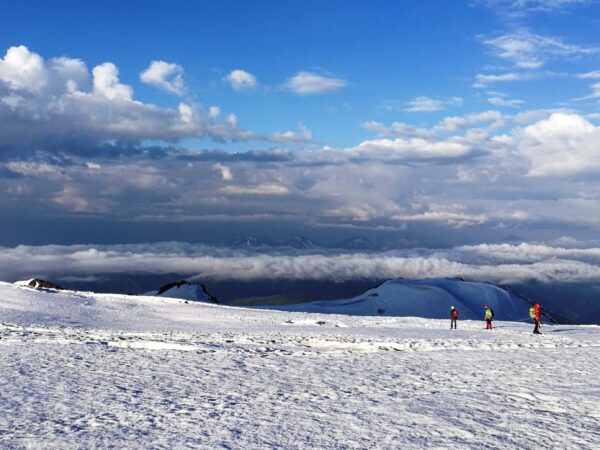 I can say the following about how I felt at the altitude: I had nothing to complain about. I had no headaches, no nausea, and slept well. In general there was so much physical effort that I wanted to spend every free hour in a tent, in a warm sleeping bag - of course, after walking on the glacier and training in drifts).

I took Diacarb twice a day, morning and evening. Perhaps this, too, helped me to adapt to new conditions with ease. In any case I experienced neither pains in the lungs, which I had read about and which I was very much afraid of when planning my trip, nor vomiting.

Not the entire group made the ascent to the summit. There were four people left in the camp. Some were not allowed to go by the guides, some refused, objectively assessing their own strength.

We started to assault the summit at 4 a.m., and I think it was our mistake - I tell about it now as a simple tourist, not claiming to be the absolute truth. My opinion: if we had left earlier, for example, at midnight, at one o'clock in the morning - we could go in full squad at a calmer pace. Each of the guys who did not go further had already gone a long way and was close to the goal.

The ascent to the top did not seem too difficult to me. As I said earlier, the saddle from Trinity Church was a great physical effort for me. We moved in tandem at a very gentle pace, stopping more often than we could. Nevertheless, one of the group members decided to stop climbing and return to camp. The second guide Yura left with him, so we climbed the route without the finishing guide. Which, as far as I understand, was not correct.

The feeling of triumph when we finally reached the peak was blurred by the bad weather and almost zero visibility. But it was still a great feeling! We took a few pictures, took a breath, and started the descent. And going down is often just as hard as going up.

I was unconscious for a while. We wandered and wandered and wandered down the endless snowy slope. I could see the legs of those in front of us becoming stiff and wobbly from side to side. I couldn't tell how long this "white silence" lasted. When we reached the glacier, where we put on our crampons and equipment, everybody was already nervous with fatigue. We returned to camp almost without emotion.

After lunch it was decided that one part of the group would start descending in two hours, and the second part, consisting of those who were not ready to go on, would stay overnight at the assault camp and descend the next morning. I stayed in the second group.

Time was so calculated that we would be at Trinity Church at 15:00 - at that time the car would pick us up and take us to Kazbegi.

That's the end of the story of the hike. 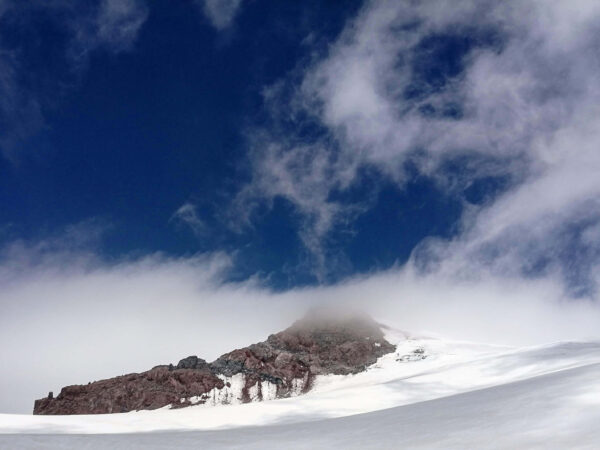 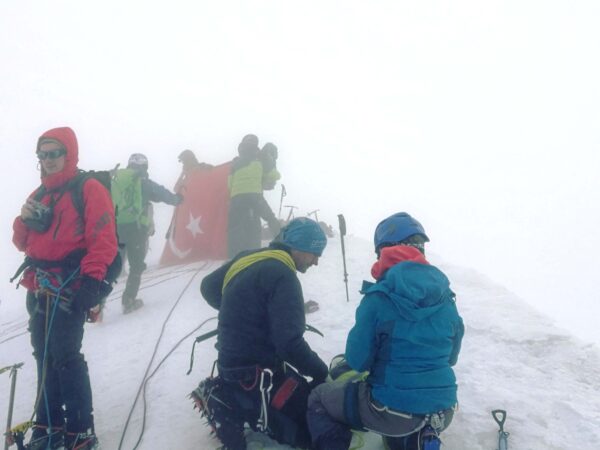 I want to thank the guys in the group. THANK YOU! For lending a hand when we crossed the rocks over the rushing mountain streams. For helping us climb over the cracks or put on our heavy backpacks. For carrying more canned food, gas burners, and general tents than we girls could fit into our backpacks. I really appreciate that. This is a hike in the mountains, no one has to babysit anyone, but you have always remained Men with a capital letter.

I want to thank the girls in our group. THANK YOU! For being able to hear and listen. For the fact that they ALWAYS asked about health and mood. For being involved, helping, feeding and drinking.)

I wish all of you good luck and new peaks, not only mountain peaks!) 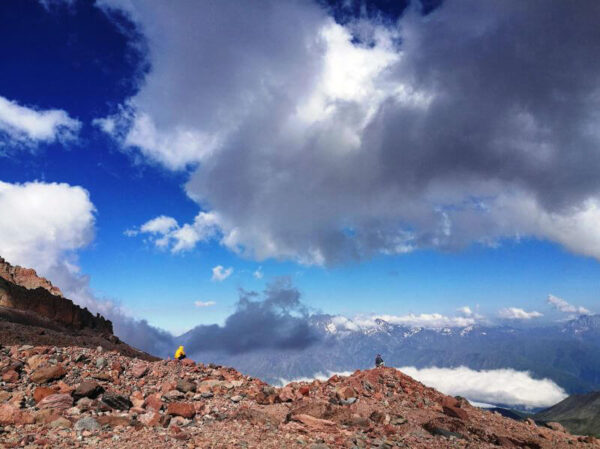