The exotic, sometimes alien landscapes of Iceland are mostly mountains and lava fields, glaciers and geysers. But Iceland is an island, and on the island there should also be beaches! And they are there. However, usual for the average tourist mattress rest and typical beaches in Iceland are not compatible. There are the usual yellow beaches on the Icelandic coast, but they are not many. And why? Yellow beaches are everywhere, and Iceland likes to be original. And talking about all its wonderful things, we can not forget about the magnificent black beaches of Vik. 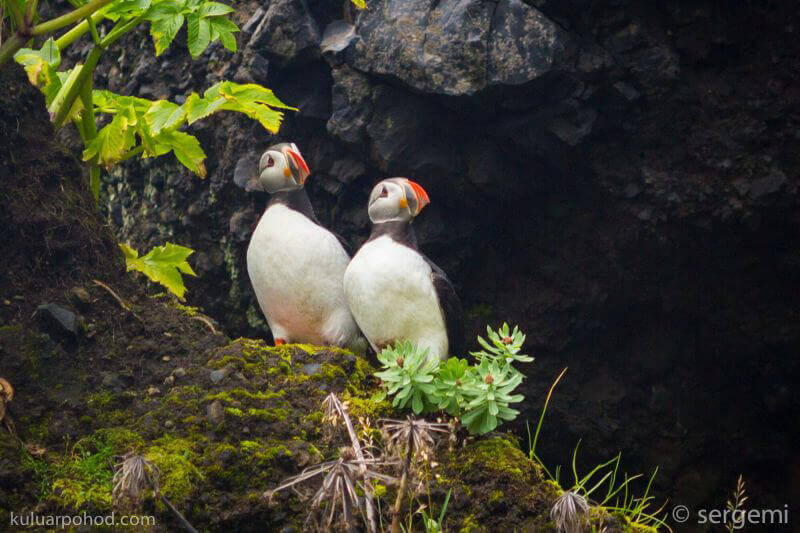 There are many black beaches in Iceland, but to enjoy the most beautiful of them, go to Vik. It’s the southernmost settlement of the island, whose coastline is washed by the Atlantic Ocean. Vík í Mýrdal means “bay by the marshy valley” in Icelandic. For a long time there was no administrative center in the south of Iceland. In 1883 the farmers were given money and were allowed to order their own goods in Great Britain to sell at home. In 1903 a store for camisoles imported from Britain was established in the bay. And by 1905 a village of thirteen houses was formed around the store, with 80 people living there. 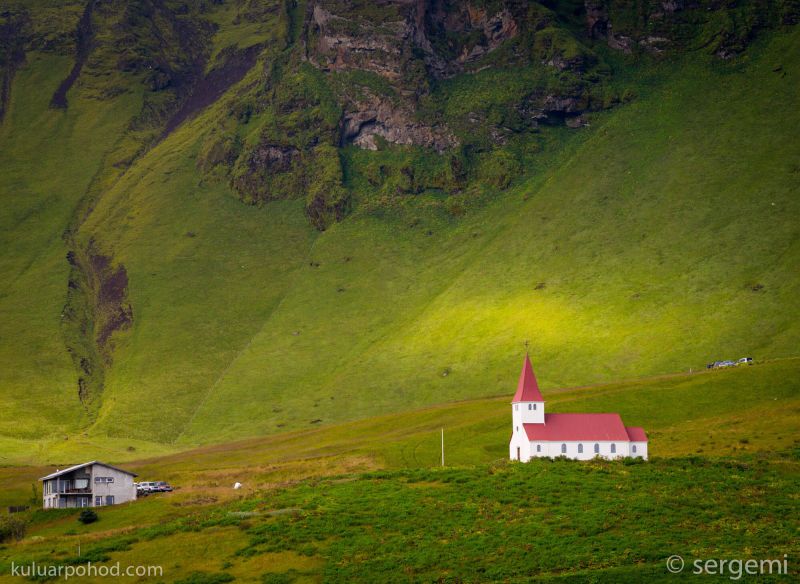 Vik is one of the few coastal places in Iceland without a port. The county road (Hringvegur), the main highway of the country, passes through the village. From Reykjavik 187 kilometers or 2-2.5 hours drive. Today the population of the village is 300 people. At the same time at the disposal of tourists two hotels, a hostel and a campsite with a swimming pool.

Photographers from all over the world come here for the extraordinary and thrilling scenery of the pristine black beach, which stretches for five kilometers and has been called one of the ten most beautiful beaches in the world. The origin of the beach, like the island, is volcanic. The black sand is once frozen lava. On the coast is almost always windy. The temperature in summer is 10-15 degrees, sometimes warming up to twenty. In addition, Vik is considered the wettest place in Iceland. But the weather here is fickle and when the sun does appear, you can observe another miracle – a lot of the brightest rainbows, which do not happen anywhere else. 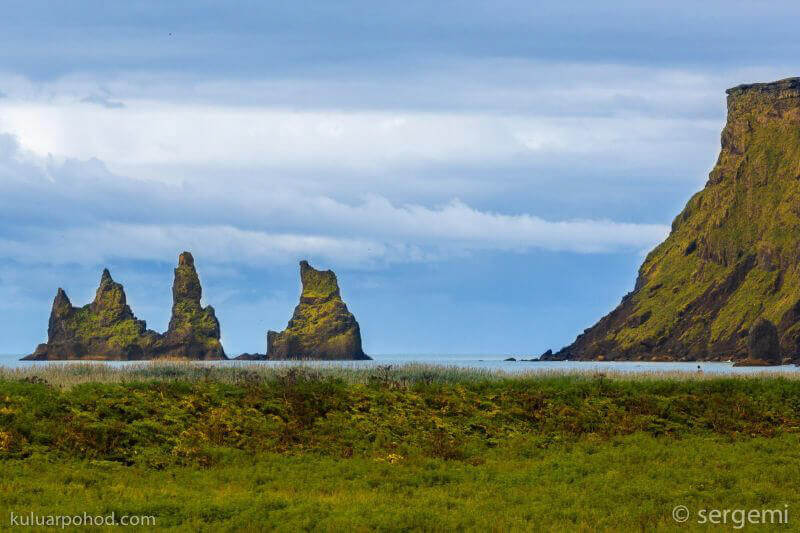 The bizarrely shaped rocks growing out of the sea are also the work of volcanoes. But the locals believe in the legend that these majestic figures are trolls, who did not have time to set sail on their ship before dawn and were turned into stones by the rays of the sun. 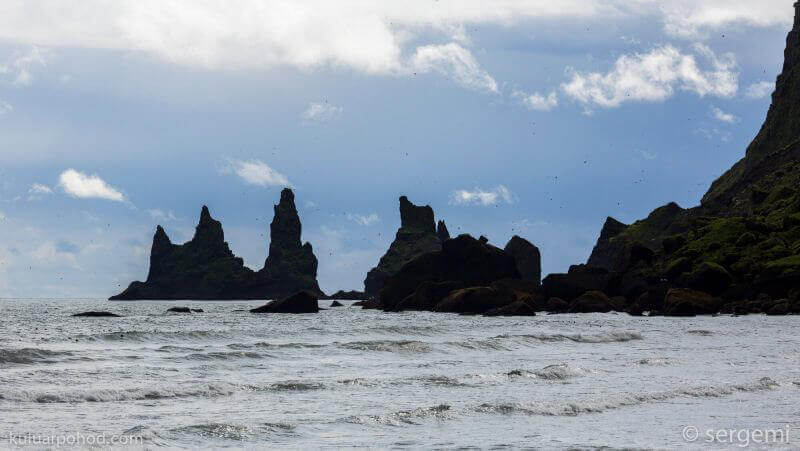 And also on Vic Beach you can see the sculpture “Traveller”, installed at the same time as the southern twin sculpture in the port of Hull (UK). The statues, whose gazes face each other, form an imaginary bridge between nations bound by maritime trade for more than a thousand years. 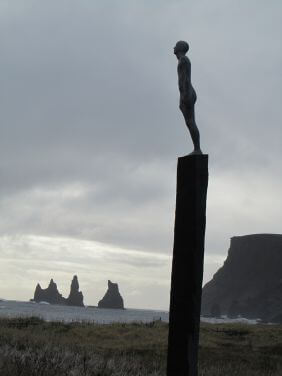 To the northwest of the village of Vic is Mount Rainisfjar, which has a special attraction for those who wish to observe a variety of exotic birds. In June-July, it is home to the largest colonies of deadpans, which captivate the heart with their amusing appearance, reminiscent of a merry clown or a sad Pierrot, and of silly birds, named for their gullibility, including to humans. 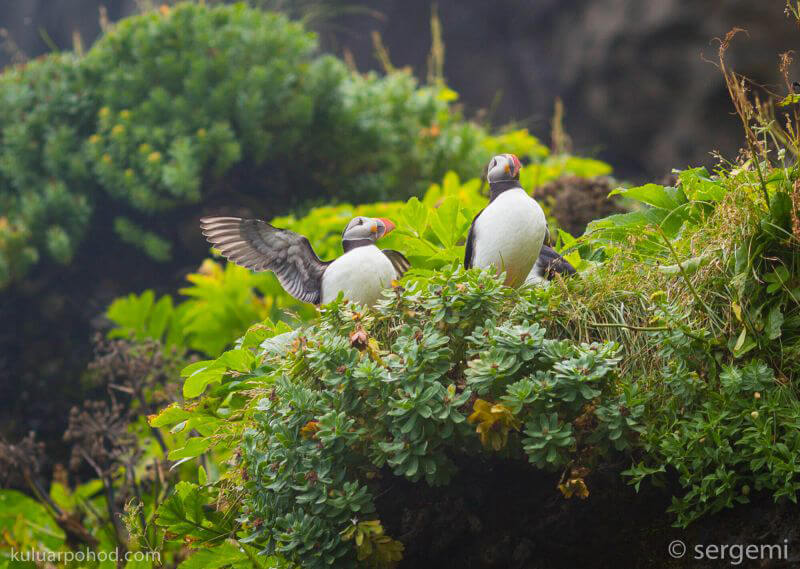 In total, there are about 350 different species of birds in Iceland. Many of them, including gulls, great skua, short-billed goose and albatross, are found in the southern part of the island, particularly on the black beaches of Vic. 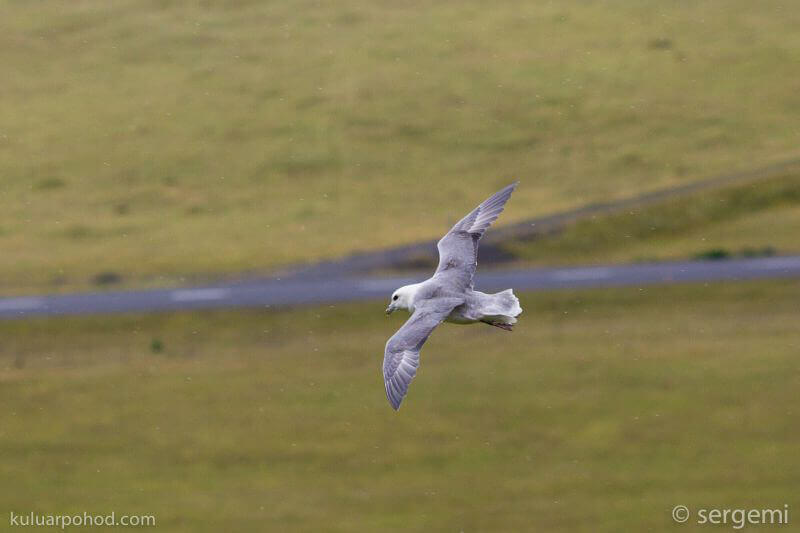 The fauna of the south coast, as well as Iceland in general, is not rich. This has its advantages. Neither pesky insects nor dangerous animals will prevent you from enjoying the majestic wildlife. But if you are lucky, you can see seals, seals and even whales!

Tourists Vic offers such activities as excursions on land and water in special boats, sightseeing flights, horseback riding, fishing for salmon and trout, in winter – trips on snowmobiles, ice climbing and dog sledding on the glacier Murdalsjökull. You can visit a fish farm and a woolen factory. 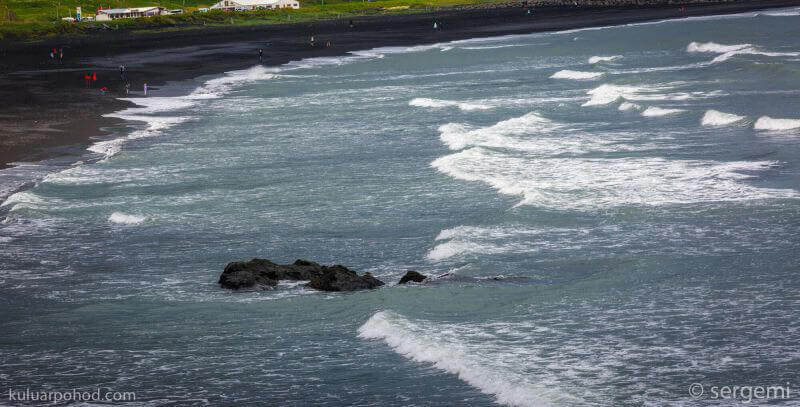 There’s also a big souvenir store where we shop on our trips to Iceland. Here you can buy magnets, souvenir chocolates, statues of deadbeats, and many other memorabilia. Many people buy knitted sweaters, even though they cost $170 each.

Near Vic is the glacial Yokulsarlon Lagoon, where we will go next. You can read more about the tour program and sign up here >>. Join in!