In my early childhood, after learning about the highest peak in the world – Everest, I did not think that over time the idea to reach this mountain will seize me. The route was planned on the basis of seeing and feeling everything as it is not known when I will be in Nepal, because there is a whole list of places I intend to visit. Therefore I have chosen not a classical but one of the most difficult trekking routes – White Label through the Gokyo lakes. I chose the organizer by listening to my inner feelings, working through all sorts of information about him. The fact that this track is run by the club’s founder, Taras, also played an important role in my choice.

Reading information about high altitude treks, I learned about mountain sickness, which can be earned in the mountains and it is not the kind of earnings you can brag about. Mountain sickness is individual, and in its worst manifestations can lead to continued trekking, but not with the group, but vertically up and well above Everest, if there is no time to evacuate the sick person. Evacuation is done only by helicopter and the cost of this attraction ranges from $3,000 and up. In order to save finances and spend them later on more interesting trivia, I had to research the insurance company market. It was fun! The questions that were voiced to me amused me: “Why are you flying to Africa?”, “Aren’t you scared?”, “Why do you need it!” In the end, the situation with the insurance company was sadder than I thought. The obligatory item that should be in the insurance “Helicopter evacuation” was only in PZU with 10% deductible and ERV. I never found any clear wording on the second one, but I was assured that a combination of 2 separate clauses was what I needed! I had to convince myself that this was the case, buy the insurance and settle down. Some of the organizers advised me not to climb that route at once; they advised me to start at an easier one up to 3000m, then 4000m. I successfully ignored this advice and started to get fit in order not to give the “mountaineer” too much of a reason to get to know me. Since April, jogging twice a week for 5 km a day has been the norm for me.

A separate part was buying the necessary clothes and equipment, which, by the way, is also interesting to some extent. I’ll focus separately on shoes and a sleeping bag. Along with good trekking boots I took non-membrane trekking shoes, planning to wear them up to altitudes of 4000 m. It turned out I covered the whole route without any problems, except for climbing Cala Pattar! The sleeping bag should preferably be of comfort class -5. A great addition to the sleeping bag would be “grandma’s” woolen socks!

And now I’m ready to travel!

I took FlyDubay tickets two months before the start of the Kiev-Dubai-Kathmandu route. Nothing special about this company. Ordinary low cost airlines.

I got to Kiev from Mariupol by bus, because I had no time by train. I couldn’t get to sleep. The only thing I was happy about was the 2-hour layover in Dubai, which was marked by an amusing and educational moment. While I was talking to an airport employee about connecting to the WI-FI in a specialized airport point, we were approached by a guy who started talking with despair in his voice: “I have no money. I have no passport! I do not know what to do! Earlier, when I was in Africa, I realized that “our” people were somehow different. It was his accent that gave me confidence that the person in front of me was “our” man. The natural question I might have asked was, “Do you speak Russian?” “Only, onlyRussian!!!” – he replied. I was not mistaken. The guy whose name was Oleg turned out to be from Odessa. After removing the untranslatable wordplay that characterized his situation, it turned out that he had been detained by the local police for six hours while his belongings, along with his documents and money, flew home. He was especially surprised at the reason for the delay. He was accused of being drunk. “Well what on…. drunk! So he had a few drinks!”, he was perplexed. At this time I was already beginning to board and, after advising him to contact the airport administration, I left for boarding. Oleg, I sincerely hope you made it home!

We arrived in Kathmandu at 7 am. I didn’t sleep the second night. I watched the sunrise, looking at the peaks of the Himalayas which had appeared on my port side.

They say you can never be sure of anything, but that I would only be interested in the mountains in Nepal, I was sure and how right I turned out to be! On arrival in Kathmandu I met Taras and his sister Oxana (in the Sherpa language – “sister”). As I had planned, I slept the night off. By the evening all the participants were assembled, and we had a rite of passage over dinner in a restaurant and the receipt of our trademark buffs.

Early the next morning our journey began with a local flight from Kathmandu to Lukla. At the weigh-in we were counted to be 24 kilos overweight. Looking ahead, on the way back there was no more overweight!

The trek starts and ends in the village of Lukla. I had read about the local airport in Lukla as one of the most dangerous airports in the world, with no real second chance landing. I’ll be honest, when you board that little cab plane, there’s no fear, there’s a sense of some excitement or something like that. The flight takes about 30-35 minutes. I sat behind the pilots and saw the landing phase itself. 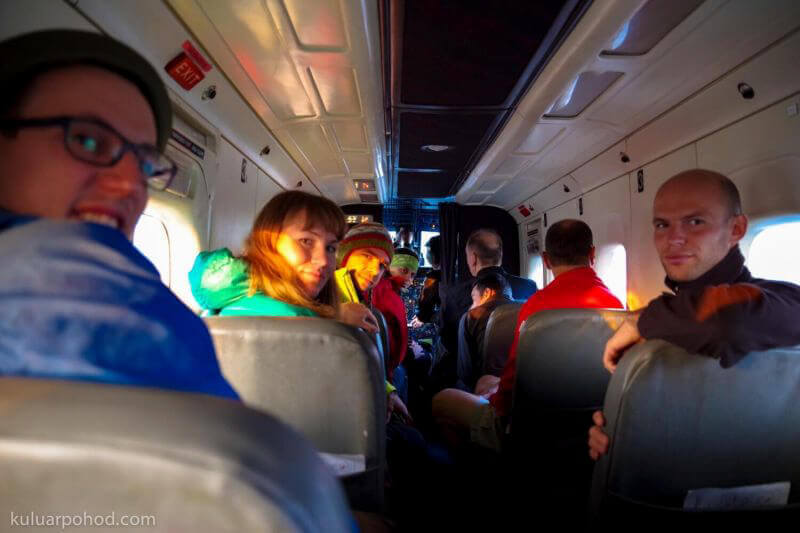 It’s a funny feeling. The strip makes a stronger impression in person than in the photo. The runway is 500 meters long with a noticeable slope going into the abyss, and on the other side is a rock. When the next plane takes off with its back to the cliff as much as possible, people take pictures and shoot in masses… just in case.

After meeting our guide, Raju, and two porters, we headed to our first overnight location.

The whole trek is a new experience, both emotionally and physically. You see live the majesty of the huge mountains combined with the green forest, blue skies and creeks that you cross via suspension bridges, helicopters occasionally flying overhead, evacuating people who a few days ago were also admiring these same scenery.

The road is constantly going up and down. The total cumulative climb in a day can easily exceed 1 km. If your body has adapted to the altitude, oddly enough, you get real pleasure from the upward movement. From time to time we stopped to rest and drink tea. In these moments you can feel the beautiful sound of silence, guarded by mountain giants. 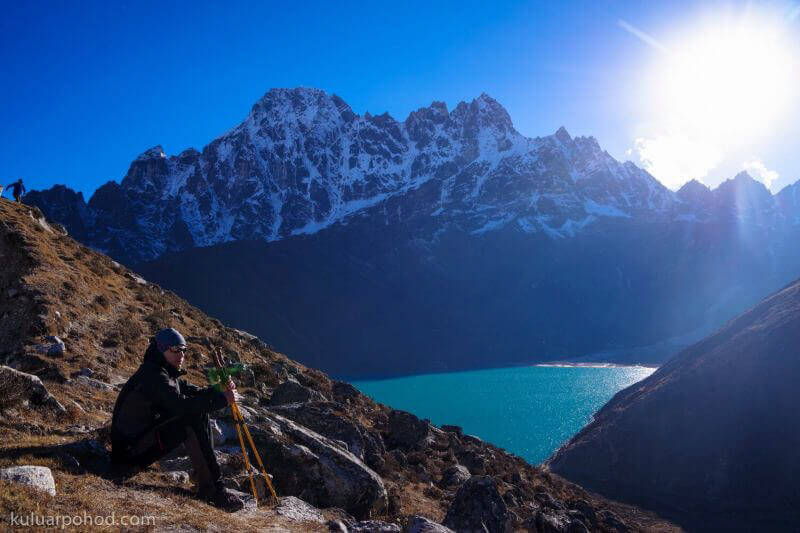 The first overnights… Steam coming out of your mouth and water freezing… The sight of the night sky, studded with stars, like nowhere else. 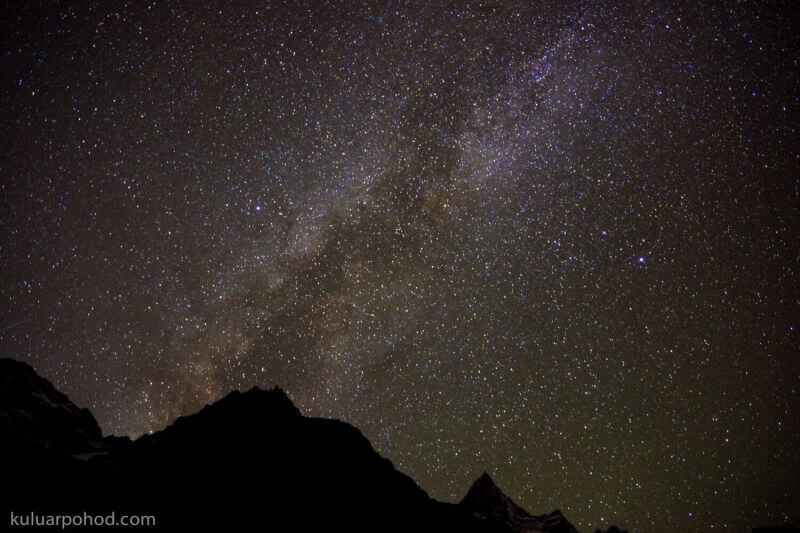 The feeling of heights!

Passing one of the suspension bridges, we met a boy about 10 years old, who was carrying 2 bags marked 30 kg! At such moments, self-esteem falls.

We remember the climbing in Namche. The first 4000m. Amazing views from the ridge of the mountain!!! 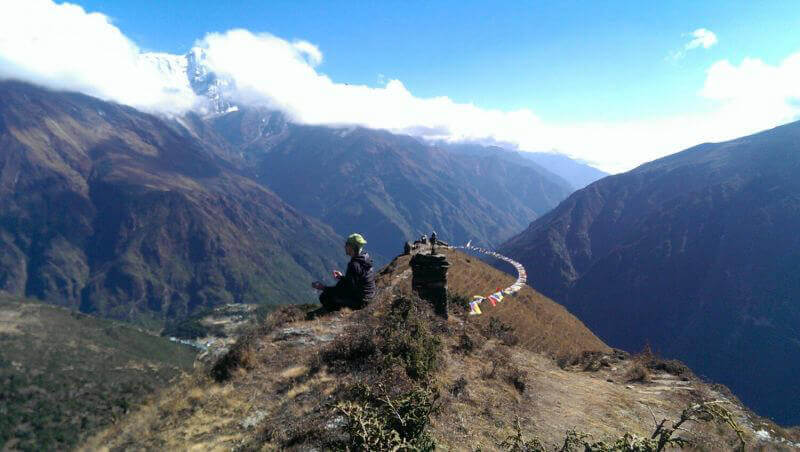 The first pass, which in any case will be remembered for a lifetime, though, each for different reasons.

Mountain invigorating water, which when you wash your hair, makes the skin of your face stretch to the top of your head, making your face smooth without wrinkles.

Narrow paths, sometimes at an incline, on which you walk as if on an autobahn, and at some point you realize that just stumble – and roll far down. But this thought disappears after a couple of seconds, and you go on.

Sunset in the majestic mountains. 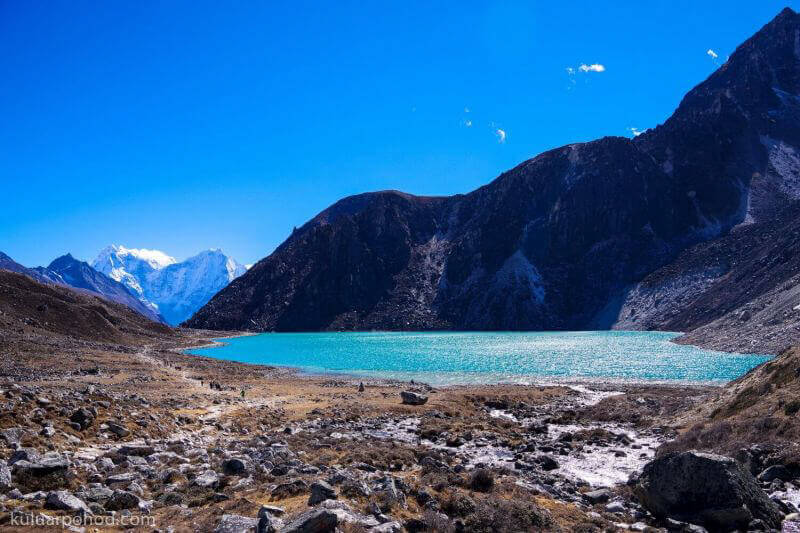 The cherry on top of this cake of feelings and emotions was climbing Kala Pattar and meeting the sunrise with a view of Everest. I think many people had a lump in their throat. 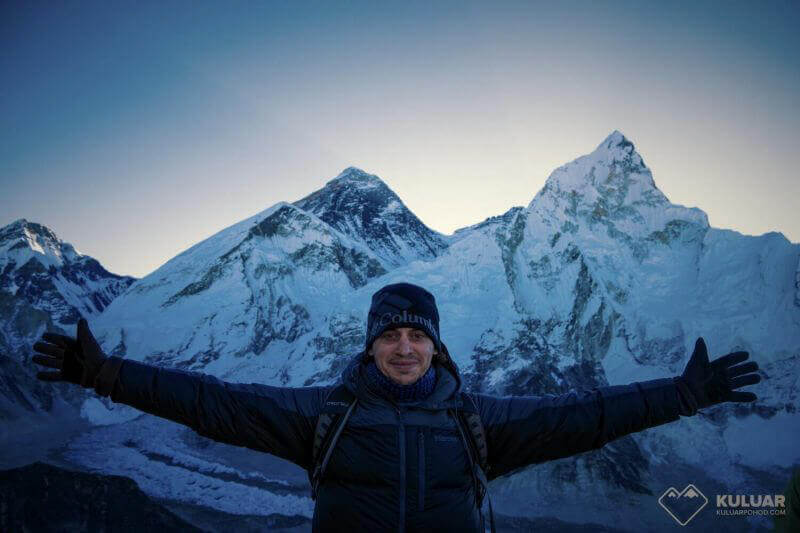 I chose the period of the trekking purposefully – the end of October, the first half of November. During this period the probability of precipitation is minimal. During the entire period there was no precipitation, and cloudiness was observed in the first few days after 2 pm. The rest of the days are the clearest cloudless skies.

I think the main effect of jogging is to prepare the leg muscles for exertion. To some degree, endurance. With the cardiovascular strain I experienced, there was no shortness of breath. I suggest having a knee brace, as the steep descents are very stressful on the knees, elastic bandages, more patches.

A small group is, in my opinion, the best option. In this case there is a company of friends effect. Here, too, we were lucky. 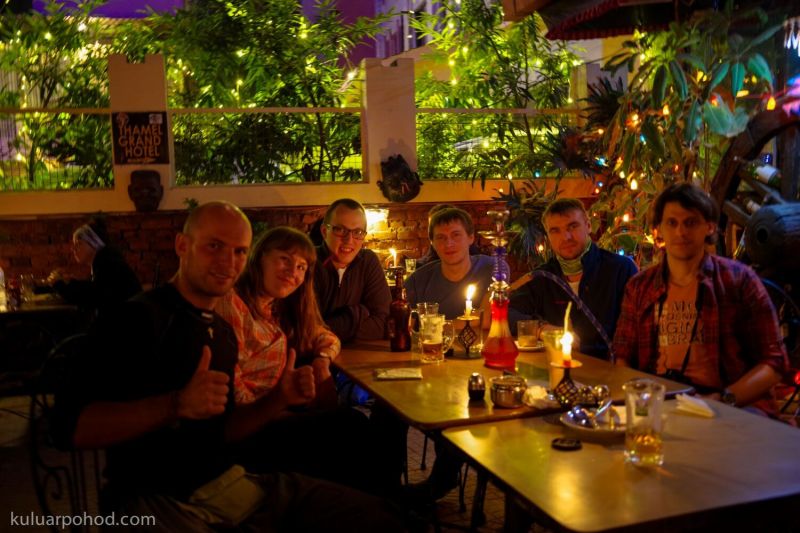 The entire group made the trek in its entirety, saving an extra day, making it possible to make the trip to Chitwan. As for me, I felt the strain on my cardiovascular system in the first half of the trek, especially on the steep climbs in the form of stone steps, when my heart rate flew off in a few seconds and strangely came back to normal after a few minutes of rest. There were no other symptoms of a mild form of mountain sickness: headaches, shortness of breath, nausea, etc. I had a headache only once and only at 5160m, but 1 tablet of Citramon got rid of it fast.

I think we reached the excellent acclimatization, and Taras should be credited for that, namely for the correctly formed route and the radial exits.

The higher up, the more people sneezing and coughing in the loggias. I advise to have in your medicine cabinet such drugs as Lavomax (immunostimulant) and Bioparox (throat spray). I don’t know if it’s a coincidence or not, but these medications relieved my cold symptoms as early as day 3. You have to remember that any colds at altitude progress quickly.

The menu is quite varied throughout the trek, but it is the same everywhere. The closer you get to Everest, the more expensive it gets.

If it is implied that some of the stuff will be carried by porter, I advise you to buy chocolate bars at home. Their cost only increases with altitude, and the extra energy doesn’t hurt. I wish I had picked up a stick of good raw sausage. It’s a nice way to surprise and delight friends over dinner in the evening.

PZU or ERV. As an option, SC Požežna is also advised.

This is an additional bonus of this kind of trip. I flew back on the same flight as our trekking participant Oleg Furmanov. Kiev was overcast, windless, a little snowy, but so native!!!

But seriously – this is a HOW TO START LIFE guide for beginners – START!

Thank you, Taras! Not once did I regret going with you. Discover new interesting places, and I’ll keep you company if possible!