The most mountainous country in the world Trekking to Annapurna base camp - trek to Annapurna
Nepal
Author: Tatiana Golyakova, 31, Moscow, Russia
Teamleader: Sergii Novikov
Overall rating
Teamleader rating
Manager rating
Nepal is a cult for mountain lovers. It is a cult even for those who have never been to the mountains. The country that is home to 8 of the world's 14 8-thousandth peaks, including the legendary Mount Everest.

Naturally, the thought of getting to this country has been there for a long time. But as usual it was spontaneous, I decided it was time, I bought the tickets, booked the nearest tour in Kuluar and in 2 weeks I flew in the direction of the most mysterious sounding capital of the world – Kathmandu.

The itinerary I chose was Annapurna Base Camp. First of all, a full trip fits into 2 weeks. And secondly, it is listed as one of the easiest and most scenic routes in the Himalayas. But more about that later.

There was rather no trekking experience. There were mini trekking for 1-3 days in different parts of our planet, but the altitudes were quite different:)

ABOUT FLIGHTS AND TRANSFERS

There are no direct flights to Kathmandu from Moscow.  For my flight I chose Air Arabia which took 7 hours for me to change at Sharjah airport (UAE), the total flight time was about 19 hours. But if there is a possibility and suitable flights, I still recommend flying with Qatar Airlines. Sharjah is a very small airport, there is just nothing to do so much time and not very comfortable. Neither is the flight itself – it feels like the airlines are low-cost.

As for getting around the country: we went to Pokhara (that’s the town next to Annapurna) by bus there and back. The way is not easy, 120 km because of traffic jams and serpentine road takes 7-8 hours, and the quality of the road is so that no massage can compare. That’s why I recommend to take a plane on the way back – there are several flights a day to Kathmandu, and after a vigorous trek it may be a good solution.

I’ve been organizing all my travels on my own for a long time now. But in the case of Nepal, I was very happy that I chose a full tour from Kuluar. Trekking is already a challenge in itself, so it’s great when the questions of organization, getting permissions, choosing the best route, don’t concern you.

Plus we’ve formed a very friendly and fun group. It was great to relive all the moments together, to joke and laugh at different situations (and we laughed almost non-stop), to discuss impressions, to play different games in the evenings in cozy lodges. 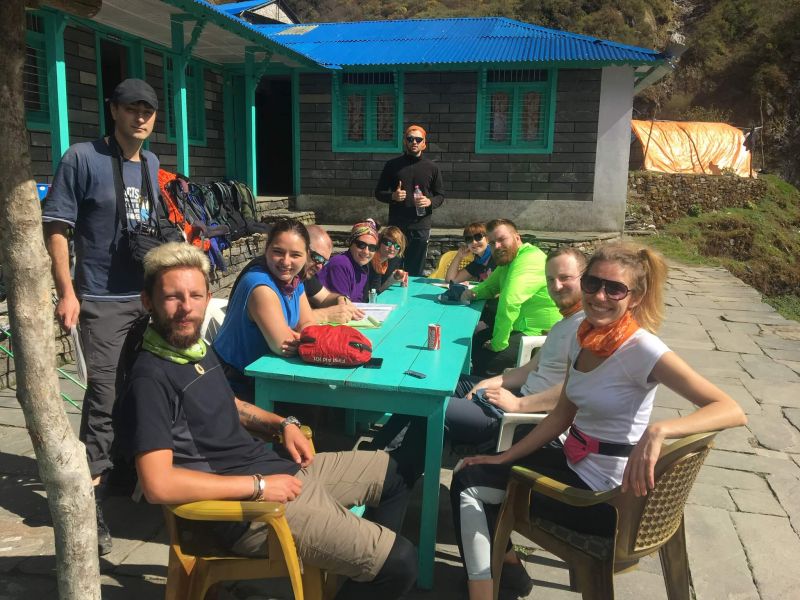 The trail is actually scenic and very varied. It follows a trail laid out by locals between villages (and then between camps). It is basically a staircase made of rocks.

The first part goes through the jungle, and it really is very beautiful. You feel like you’re in either the movie Jumanji or Lara Croft. That is around the real impenetrable jungle, the road now and then goes through various rivers, suspension bridges, rice paddies. The views are amazing, the snowy peaks are still very far away. There are still real small villages where Nepalis live, growing crops and having livestock – mules, yaks, goats, chickens. The road goes up steeply, then quietly along the ridge, then smoothly through the rice fields, periodically gaining and losing altitude. This part of the route is difficult, my body and legs are not yet used to physical exertion, and the rises and falls are very high. You feel that you are at the limit of your abilities. 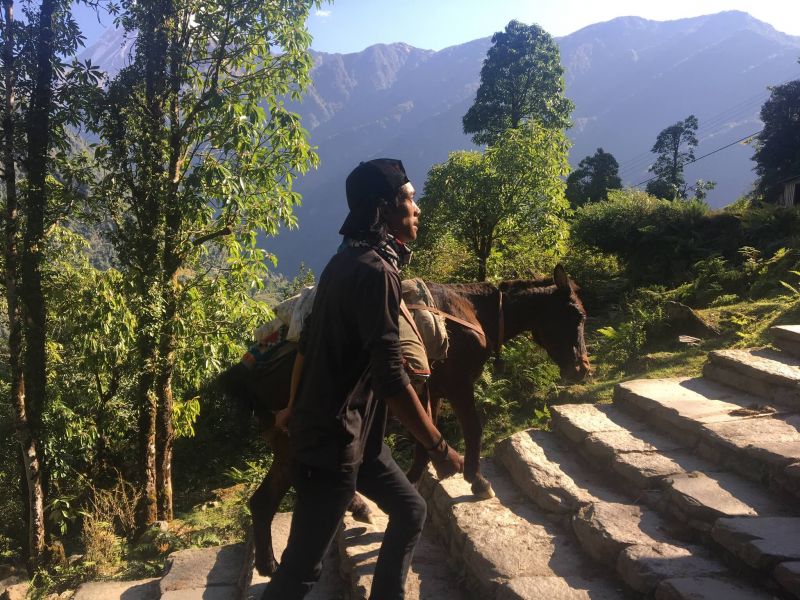 After Deurali point, the scenery changes and everything around us looks more like Scottish landscapes. The road goes through a gorge with a bubbling mountain river, and in the distance you can see the snowy peak of Machapuchara. I must say that even considering that the main goal was Annapurna, Machapuchara was a very special mountain. It is very recognizable from any point, its peak looks like a fish tail. According to legend, it is on Machapuchara that Shiva lives, and when snow swirls can be seen over the peak, looking like smoke from afar, it is said that Shiva is smoking. Because the mountain is sacred, climbing it is forbidden. The only exception was made for a team of British climbers in 1957 with the condition that they would not set foot on the summit itself. By the way, it is because of the proximity of Machapuchare that all meat is forbidden in lodges close to Annapurna base camp. 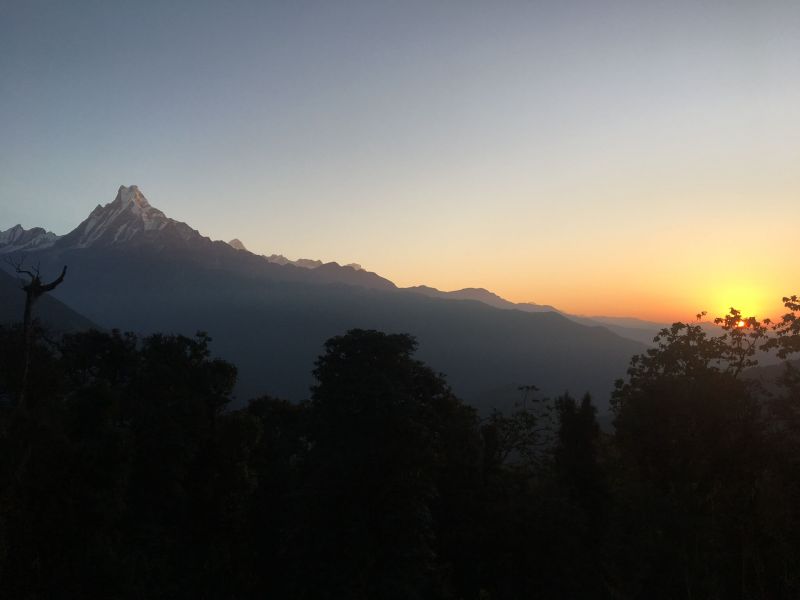 Arriving at Machepuchare Base Camp, the scenery finally changes; now there are only rugged mountains around. The snowy peaks seem to be just around the corner. We caught one moment at sunset when two peaks (Annapurna and Machepuchare) were glowing pink and gold at the same time. It was unreal. You can already feel the grandeur of the Himalayas here, the power of these massifs.

To reach ABC we had got up at 3am and walked in the dark, frosty morning, but by dawn we were at our final destination. The feeling that we WALKED THIS WAY was unbelievable. 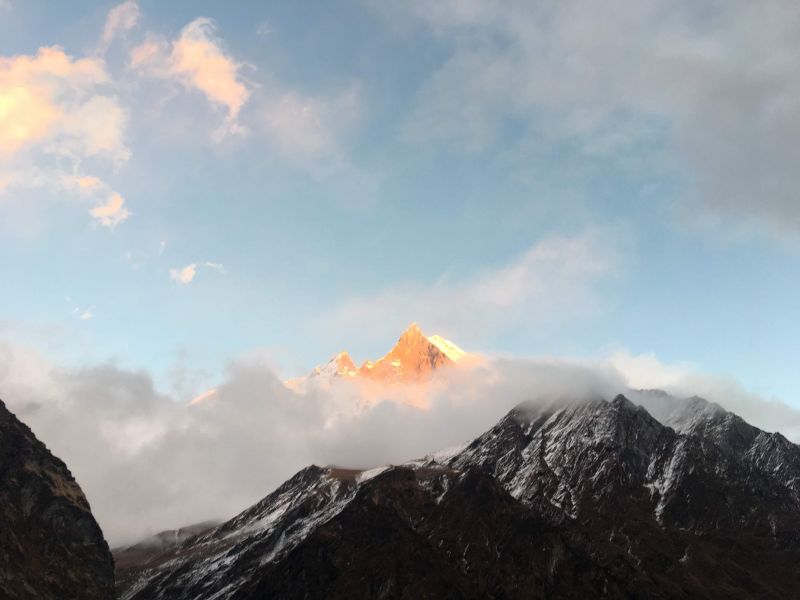 I’ll be honest, the trek was a lot harder than I thought it would be. As our guide said, if the trek went without asking every day “What am I doing here?” – It was not a real track:) We, apparently, it was the most real. But now I can imagine what it means to conquer the mountains. The 9 days of the trek are at a very intense pace.

It’s really a trek, it’s really overcoming yourself. It is better to be well prepared physically in advance. Especially the knees – a lot of descents and ascents, can hurt ligaments, so it is better to prepare, as well as to bring suitable ointments.

And, of course, hire a porter. It’s inexpensive, but it will make your journey much easier and allow you to enjoy the scenery and photos more. 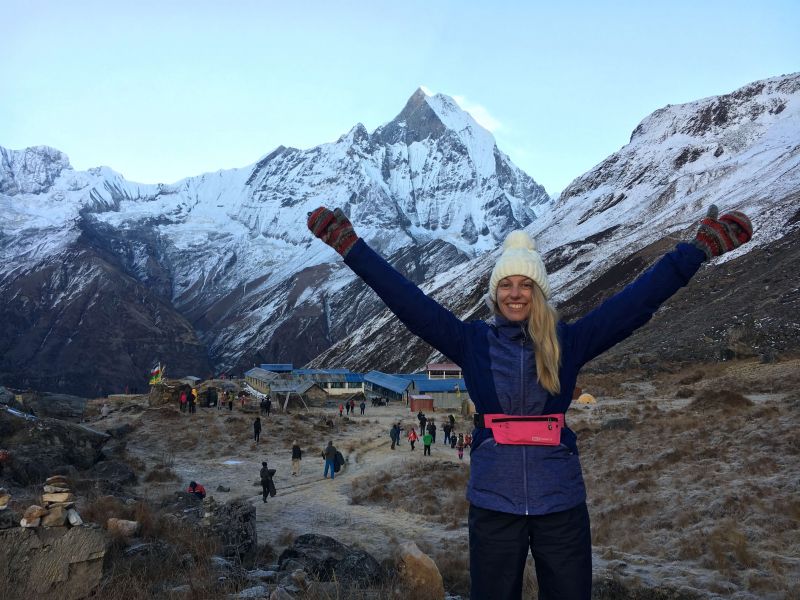 Pokhara is charming, linger there. Go boating, sit at a cafe on the lake, fly paragliders. Perhaps Pokhara has the highest standard of living in Nepal. There I finally got to see the mountains in silence, without the rush and bustle of the Stupa of Peace, which is a perfectly white Buddhist temple on the mountain. The views take your breath away. 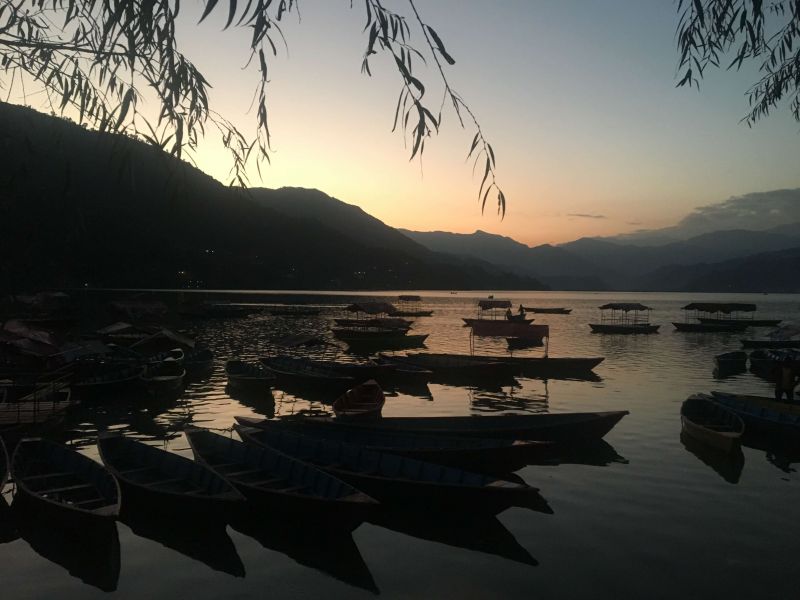 Kathmandu… For me it was a dusty apocalypse. I love the hustle and bustle of big cities, but I honestly can’t imagine how people live in Kathmandu. It is very dusty and dirty. We visited 3 temples, 2 Buddhist and one Hindu (Pashupatinath). It’s worth it because you can immediately see the difference between the two religions.

We found a charming oasis in Kathmandu where we recovered for half a day with a massage and lunch in a cozy garden. The place is called Dwarika’s Hotel. I recommend stopping by at least for tea, it’s 15 minutes from Pashupatinath.

And, of course, get ready for some shopping. Cool wool stuff, embroidered kaftans, paintings in the galleries – I wanted as many hands as Shiva’s to take away more of everything:)