After reading so many horror stories about Annapurna, I just couldn't help but go there. =) Trek around Annapurna + Lake Tilicho
Nepal
Author: Svetlana Pavelieva, 27, Moscow, Russia
Overall rating
Teamleader rating
Manager rating
I learned about Annapurna after reading the book of the same name by Maurice Herzog. The mountain, on the top of which the first foot stepped the man, who decided to take the height of 8000. And at the same time one of the most unpredictable and dangerous mountains to this day. So the question of my journey to exotic Nepal and trekking around Annapurna was only a matter of time.

I was also interested in this route because you can see other notable eight-thousanders – Dhaulagiri (the very first expedition of Erzog considered it inaccessible) and Manaslu (Spirit Mountain, around which there is also a hiking route). 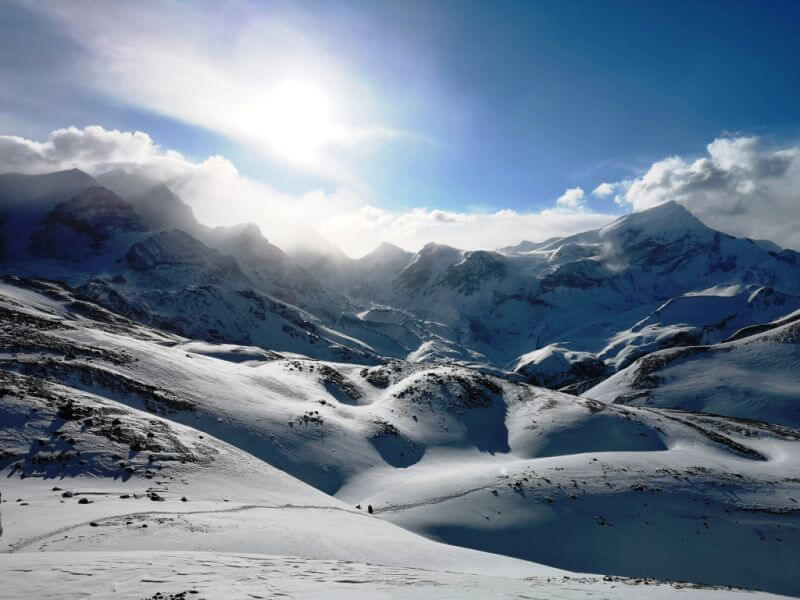 And here I am. The Himalayas! These places are beautiful. Almost untouched nature, a trail winding between trees along cliffs and gorges, and snowy peaks in the distance! The first day it rained. The sky frowned and gave the atmosphere a bit of alien scenery. But in the next few days the sun came out and immediately the tips of our ears got burnt. Because we put sunscreen on our faces, but everyone forgets about our ears. Everyone except the sun. First we saw Manaslu. Far away, but very impressive. The wind was raging at the summit, it was evident by the scattered cloud of snow over the bristling peaks. And so we saw Annapurna 2 (there are many peaks in the Annapurna massif). The two Annapurnas – 2 and 4 – are the main peaks of the trek around Annapurna, because most of our route goes around them. You can admire them to the fullest. When you have the strength. And walking is sometimes difficult. I remember physically difficult was the trek to Upper Pisang. We walked 20 kilometers, which is very, very difficult for those heights. 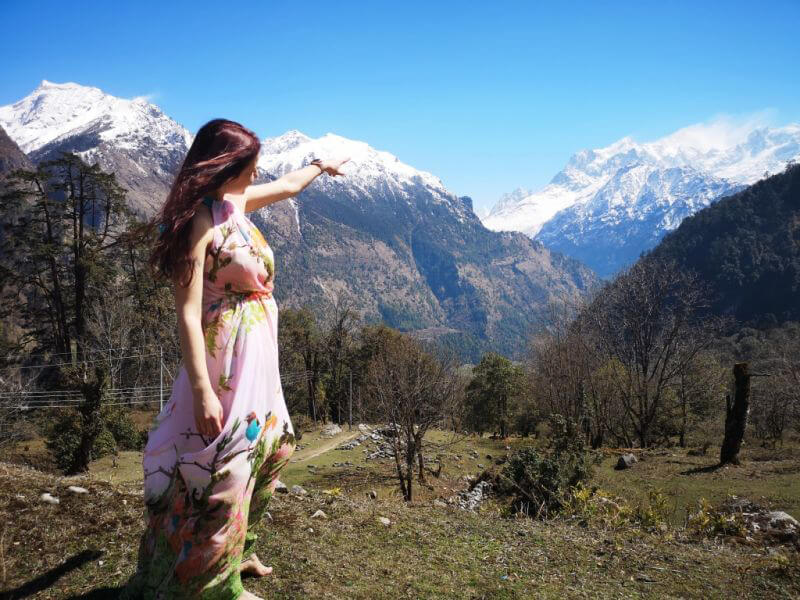 It is interesting that on the slope of Annapurna 2, the rocks and shadows form a semblance of a human face. But we only noticed it later in the photos!

Most of the trek is quite easy and fun. We gained altitude gradually. We stayed in lodges with showers, which allowed us to wash every day! Yes, sometimes it was pretty cold water or a small trickle, but every day of cleanliness adds to the joy and positivity. 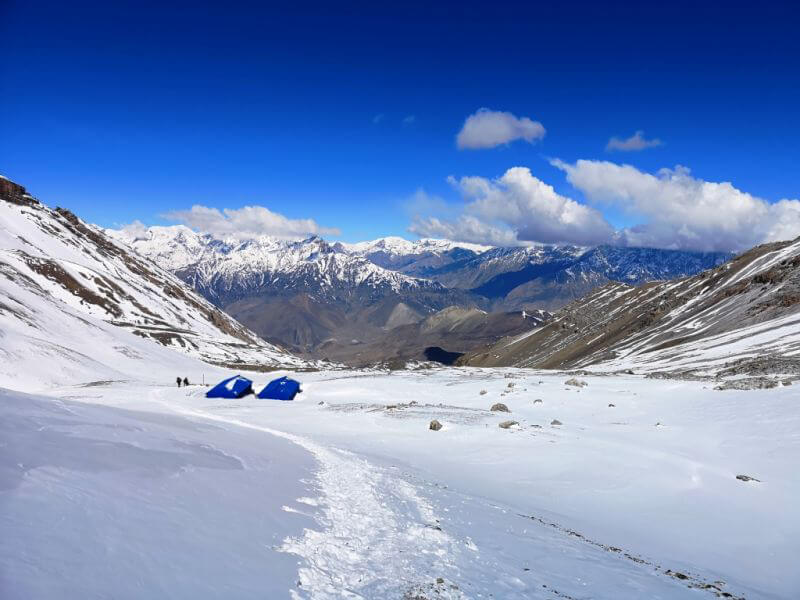 But the food in Nepal, to be honest, is not very good. But maybe I’m just not a fan of it. However, there were a few nice moments on the track. One, it is a stop at the apple store – there is an area with apple orchards, and you can buy apple juice and eat a delicious pie with apples. Fruit is very desirable in the mountains, so an apple there is more desirable than red caviar. 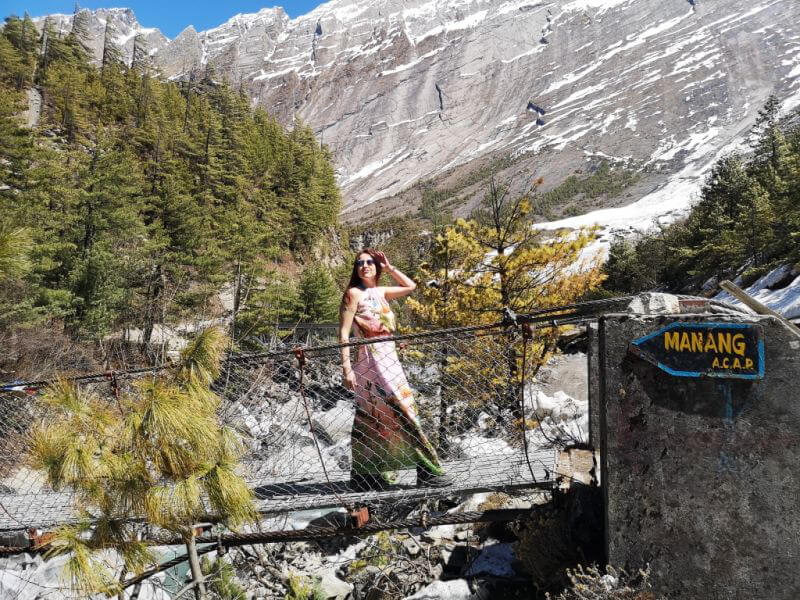 And then there’s Manang. It’s quite a big village. And there are coffee shops and all kinds of delicious sweets. Manang is at an altitude of 3,500 meters. The group spends two nights there, acclimatizing. And it is great! Because Manang has great showers and delicious food. Shhhh… but for dinner we ordered ourselves a pizza and even allowed ourselves a glass of wine. Joys like that sure do go a long way to keeping our spirits up and strong.

Because the most difficult part of the route lies ahead. Here everything is individual, but for me, starting from 4000 meters I start to struggle with the signs of mountain sickness. They can manifest themselves differently for everyone. But surprisingly, we had no headaches on this trek. And I also had a good, comfortable and beautiful sleep! However, there were some manifestations of the mountain sickness. For example, I completely lost my appetite and the entire digestive system shut down. It was very difficult to walk, my heart was beating as if I was doing my best to run a hundred meters. I couldn’t catch my breath. It all comes back to me now as an adventure, but it was very difficult at the time. 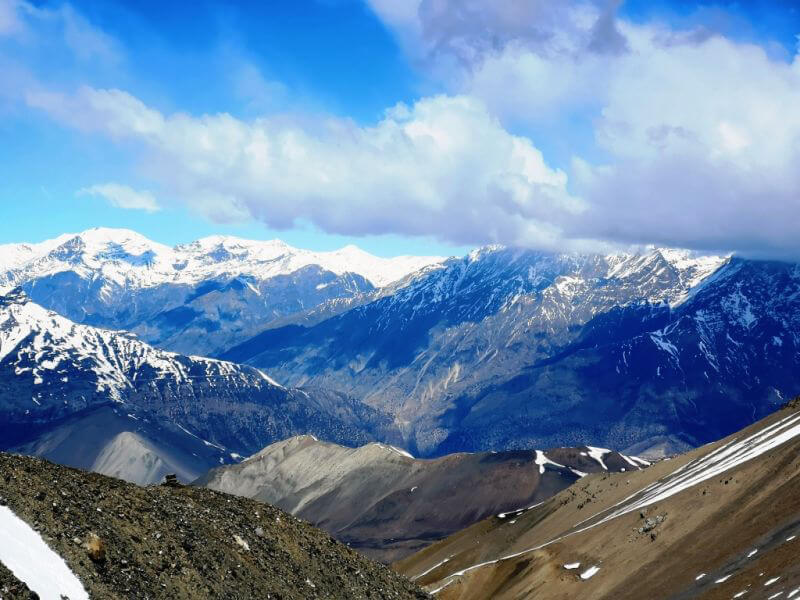 One day we saw an avalanche come down. It was right in front of us on the slope of Annapurna 4. A distant rumble and a huge snow stream began its downward movement. An entire snow cloud rose!  Avalanches are what often kill those climbing this mountain. It is both fascinating and terrifying at the same time. 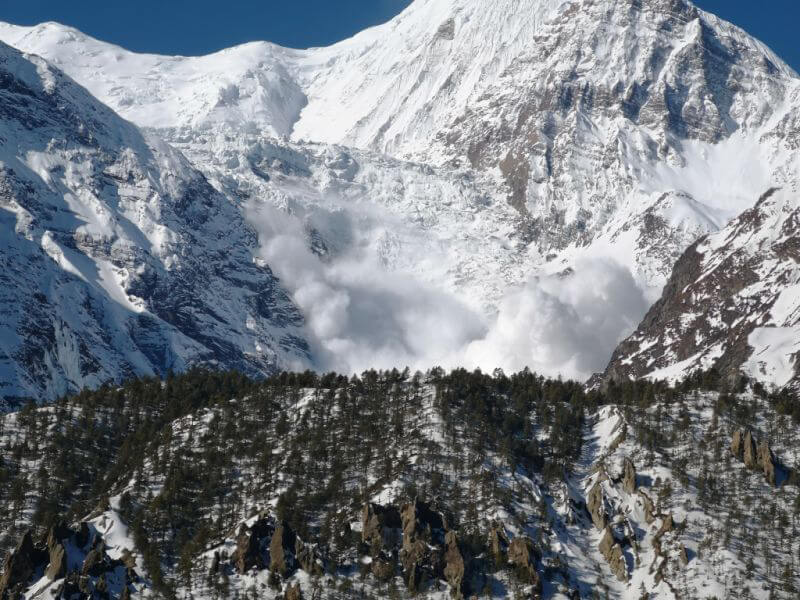 That same day we saw it – Annapurna the first. Surprisingly, from our side it was just visible as a series of hills in the distance. But do not be deceived, the facts speak for themselves, and a third of the people who dare to climb this wall, stay on it forever.

But, of course, the highlight of the hike was overcoming the 5,415-meter Thorong La Pass. The night before the ascent everyone huddled around the stove at Upper Camp. How many different people were there! We were sitting, drinking hot tea, eating a piece of dry smoked sausage and looking at people around us. So many faces, so many emotions. Everyone was a little nervous before the ascent, because the pass had just been opened and the trail was still quite risky. 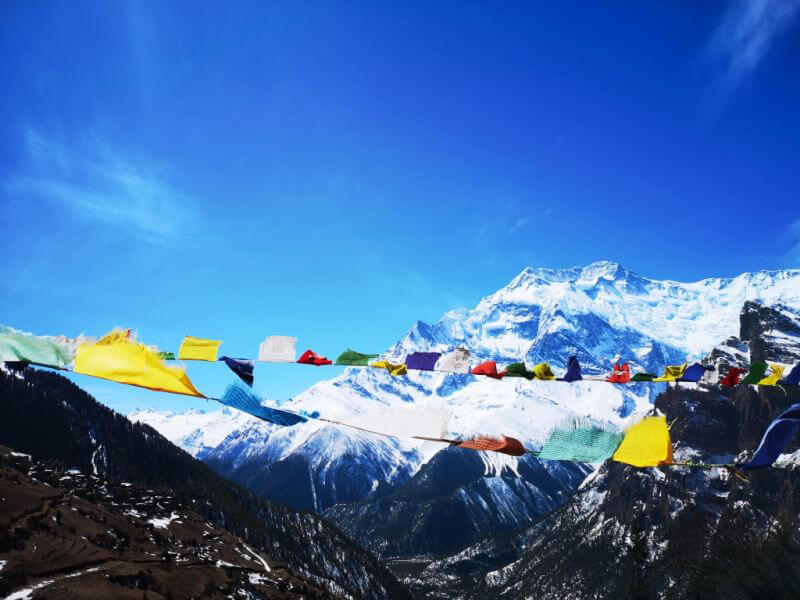 We went out early, almost at night. It was snowing, which worsened visibility. We walked closely and leisurely. Trail by trail. Darkness and silence all around, snow falling. A flashlight’s light flashed ahead of us and drowned in the gloom of the steep slope to the right. Maybe it was a good thing that we could not see the terrain we were walking through – there was no fear. But there was a clear understanding that this was no fun walk and we had to be extremely careful not to fall down. We were very helped by “crampons” – small spikes on the boots. They clung to the snow perfectly. 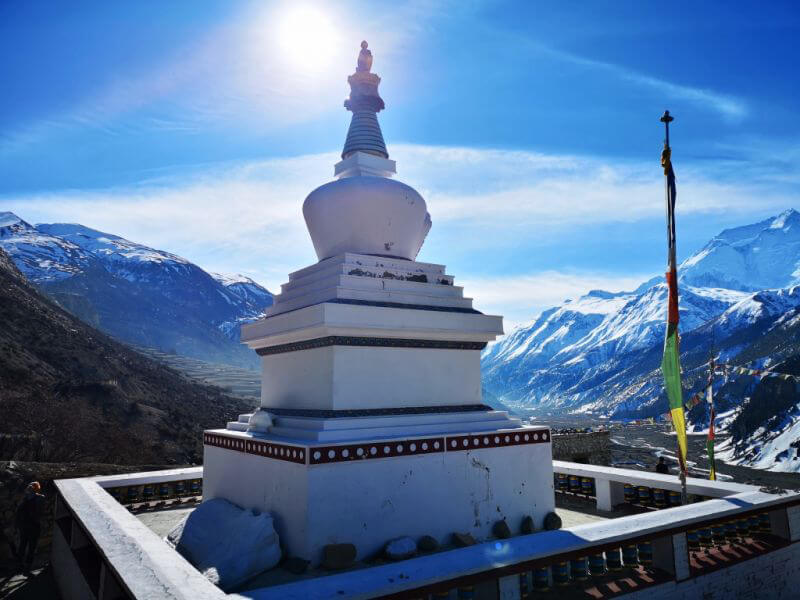 Gradually it began to dawn. The road became comfortable and gentle. At this altitude, every hill made me want to stop and breathe. It gave me an opportunity to look around. We were among the snow, among the peaks, separating two completely different areas. Behind us were the green lands of Manang, and ahead were the arid lands of Mustang. 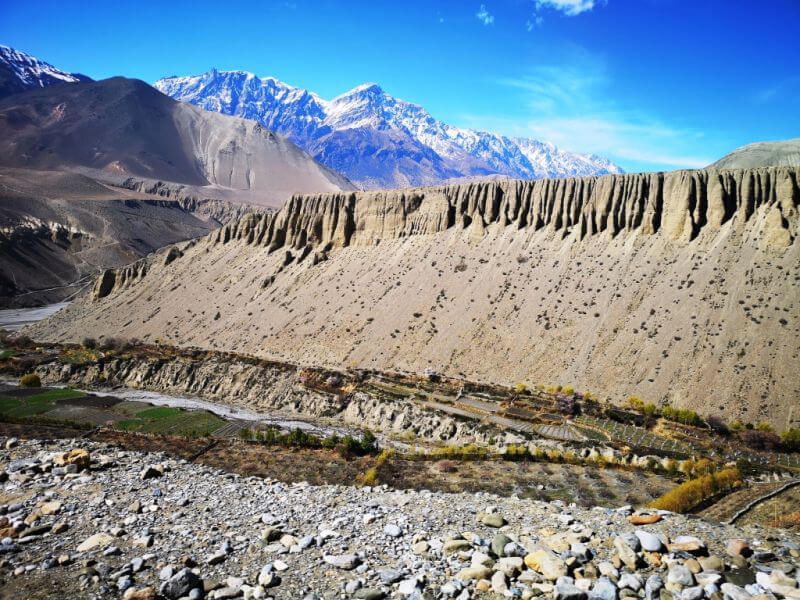 And here it is, somehow by itself – the summit! And here the sun is shining with all its might, the wind is howling and it takes away with it everything that we wanted to leave in the past, including the signs of mountain sickness. Euphoria and joy, we are here! A girl from the backwoods looking at the Himalayas on a map, now she is standing at a height of 5,425 meters, wearing a dress (tradition) and beaming with sunlight!

The descent from the pass is a separate adventure. It is very steep and long. Due to the fact that our guide took us up very early, we walked on the hard snow, but the sun was melting quickly, and I would not have wanted to be in these places two hours later. And ahead of us was a panorama of the lower Mustang lands. These lands had once been part of the closed kingdom of Mustang. But it is said that the king of Mustang lost them to the king of Nepal at cards. Here, however, our eyes were presented with the beautiful Dhaulagiri, which really seems impossible to climb. Every step gave more and more oxygen, every breath was a pleasure. Sometimes it is worth depriving yourself of comfort, straight roads and maybe even oxygen – to appreciate it a hundred times more afterwards. 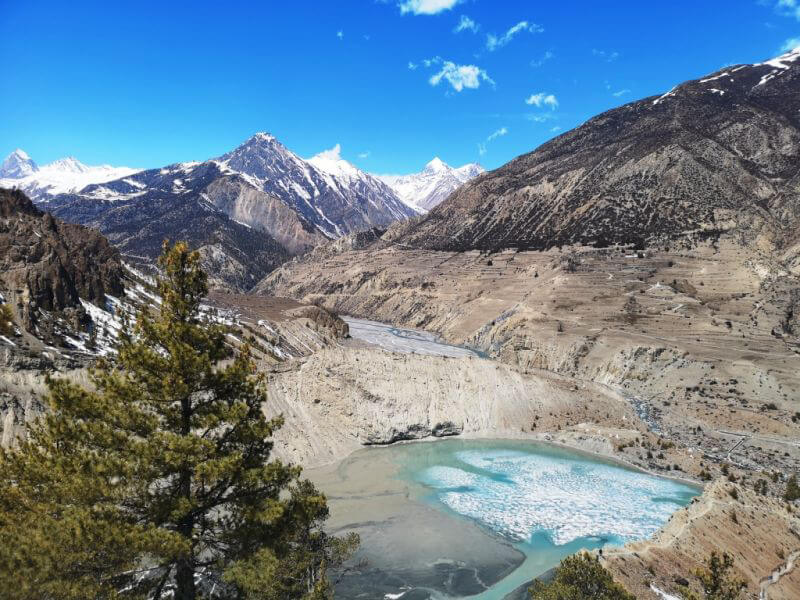 Having descended and spent the night at the hotel, we flew by plane to Pokhara, waving goodbye to Dhaulagiri through the window of the porthole.

Pokhara is also an interesting city, which should not be missed, by all means paragliding over the beautiful Theba Lake. And also to take a boat ride on it.

We also went to the national park Chitwan for a couple of days. Where we saw the wild jungle with rhinos and crocodiles, and a lot of interesting things. We even tried a local delicacy – unrealistically sharp balls of something with something )))). 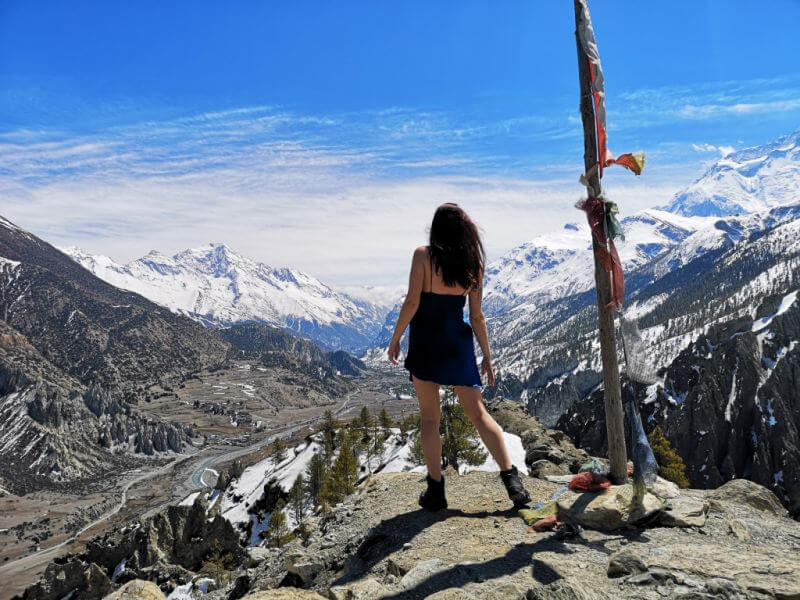 I could write a lot more about all our adventures, because this track is very diverse and rich. As if we lived a small separate life. It was such a life that when we left the dusty, noisy and sticky Kathmandu, I clearly understood that I would miss it.

The upcoming dates of trekking around Annapurna + Lake Tilicho