A hike that teaches you to go all the way Trekking in South Iceland - Journey to Mars
Iceland
Author: Taras Pozdnii, Ukraine, Bila Tserkva
Teamleader: Taras Pozdnii
Overall rating
Teamleader rating
Manager rating
Every hike teaches you something. And the more difficult it is (the route, the weather...), the more it teaches us. This hike taught us a lot. A lot. Its main lesson was never to give up.

If you go on without giving weakness a chance, you will be rewarded at the end with a small miracle. Time after time, the hike taught us this lesson, so that we learned it to the fullest. For me personally, I counted five iconic situations. In order:

1. Day hike on the lake Alftavatne - the clouds that parted.
At the beginning of the hike I conduct a kind of brief, telling the participants about the route in detail, the peculiarities of the country and everything that awaits us in the trip. Even then I said that the second night in the mountains would be the coldest and windiest. And so it turned out. After a difficult night in the wind and rain we packed our tents and headed down, hoping for better weather. At Alftavatn Lake the weather was indeed much better, the rain hardly dripped and there was complete calm.

We had a snack and I suggested we go on a radial hike up the mountain, the top of which was tightly hidden by clouds. It would seem - wet, tired, and still go to the mountain, which is in the clouds? What for? But part of the participants agreed. And it was one of the most beautiful radiilocks in the hike. On the approach the clouds had already parted and from the summit we admired unparalleled views of the lake and the adjacent valley, taking pictures among the bizarre stone sculptures. At the top we were pulled in by a cloud, but in just a couple of minutes it flew by. It was unforgettable. I liked the climbing so much that when we got back to the camp I brought the rest of the group up and we climbed the slopes of the mountain again, but not to the summit. It was the first time we went out into the clouds and nothing promised any beautiful pictures. 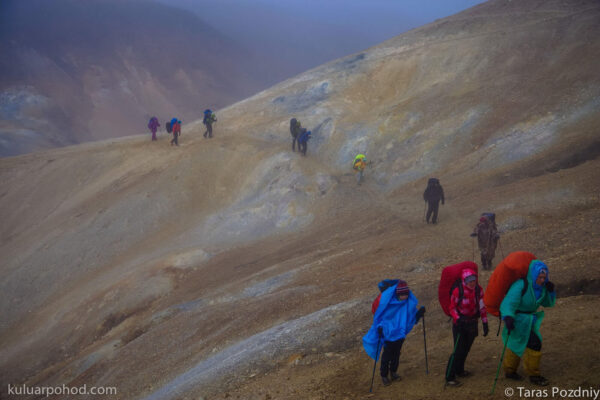 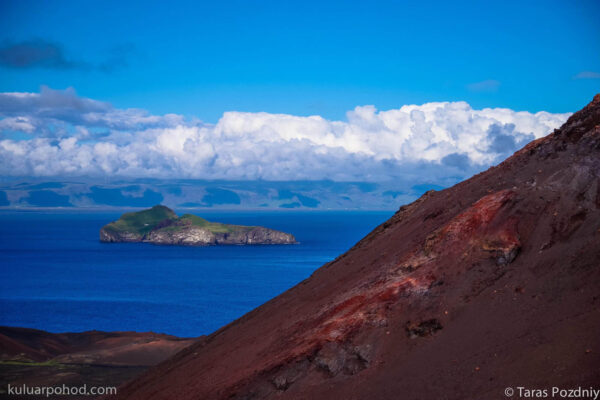 2. Ascent to the pass - believe in yourself and do not trust other people's words.
The most difficult day of the hike. Climbing more than 1000m vertical, the length of the transition of about 20km. We have already taken about 600 meters of elevation, sitting on a pause. Ahead there is another hard part - the ascent to the pass between Myrdalsjokudl and Eyjafjallajökull glaciers. Small groups of 1-5 people are coming down to meet us and they say that it's full horror above (there should be another word for it). Wind, snow from above and below, rain - in general it is not passable and they go back. Maybe for them it is the right decision. After all they are most likely here for the first time, are not prepared and without GPS.

But some of our participants start to show uncertainty and are ready to turn back too. I tell them everything will be OK and we go. On the way we picked up a lonely American girl - it's not good to wander alone in the snowy mountains in bad weather. We didn't see the weather. Yes, there was fog and wind. But the wind did not knock us down and the fog gave us visibility of several tens of meters. Going by the familiar route, it was more than enough. We passed the plateau without any problems and came to a small hut. We made a snack, it was cold outside. Part of the group went inside - and there. And there's a bunch of grannies knitting something. It's just amazing, getting into a place like this to knit. That's their knitting tour. Made tea and went downstairs. Don't dare give up without trying it yourself. Often the words of others are only an exaggeration. 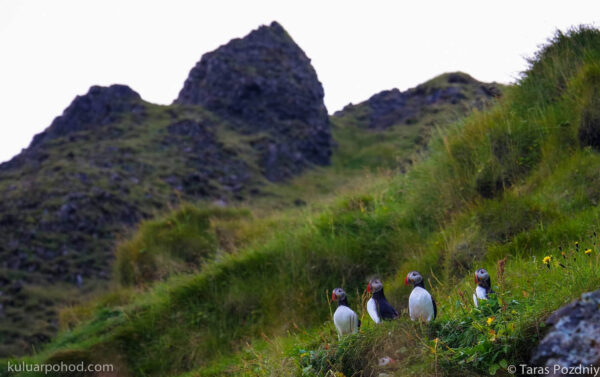 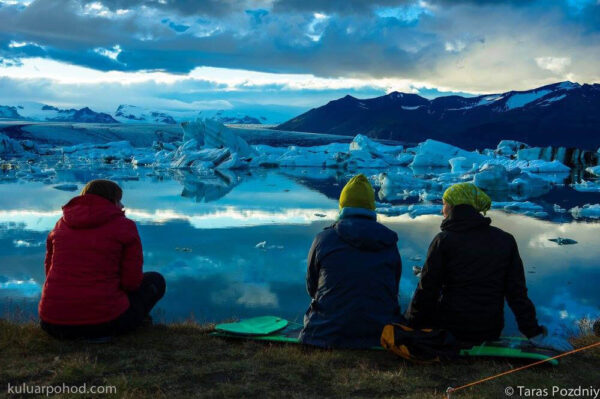 3. Day hike in Vic - it doesn't matter what the weather is outside, it's what's inside that matters!
I woke up at 4 a.m., climbed out into the rain, and began to prepare breakfast: oatmeal with dried fruit and candied fruits. Luckily for me and Lyosha there was a big vestibule in the tent where we could snuggle up. General rise at 5 am. It is still raining. We eat under it and create camp. Under it we are descending 7km by the most picturesque river Skogau. It is a pity, bad weather did not give us to enjoy these wonderful places to the full. Everybody is wet and we come to Wieck. A part of the group goes to hotels, some of them stay in the camping. Everyone is so wet that they're already running in puddles, jumping in them and, in general, having as much fun as they can. There is an idea to go to the far radial, behind a cape to basalt columns. I have not been there myself, it is interesting. There are 5-6 willing persons and we move out. Guess where? Right, into the dense clouds and drizzle. We are passing some abandoned military installations and come out to the observation point. The ocean is splashing below. But visibility is five meters. We can see neither the ocean, nor anything else. And only the dead-end jerked from under our feet and flew away into the milk. We were the ones who made a detour of five kilometers, and now we're back on the trail. Along the plateau we walk along the azimuth. It's really fun)) Everything goes according to plan and we go down to the black beaches. But war is war, and lunch is on schedule and the first thing we go to a restaurant to eat soup (very expensive). We eat, get warmed up and then something unbelievable happens - the fog begins to lift and we see the ocean. Ahead of us is a patch of clear blue sky. What a piece of luck! We run from the waves and over the waves of the Atlantic Ocean, make our way over the cliff, take a great dress photo shoot. Even wetter (from the waves), but happy we are an hour and a half back to camp. It's 10:00 pm and we have some soup waiting for us. One of the most unpleasant weather days and one of the most intense emotions and joy. And the weather forecast gave continuous rain for the next three days. 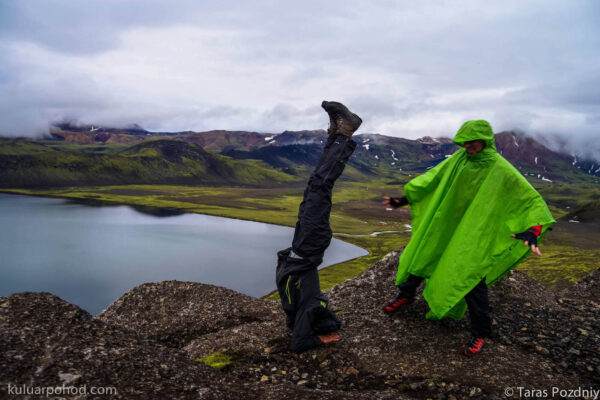 4. Glacier Lagoon is a frosty doldrums.
Remember the weather forecast that promises incessant rain? And there are still several Russian-speaking groups at the campsite who didn't go to Glacier Lagoon because of the bad weather. But it's one of Iceland's most incredible and emotionally intense places. And if not to spend the night on the shore, then at least I want to show it to the participants.

I'm thinking through all the possible options with a drive on to Hofn and an overnight stay in a campsite. But in the morning the weather smiles on us - overcast, low clouds, but no rain. We spend the night on the shore of Jokulsalron! Hurrah! This time the group is kind of crazy. Okay, the girls with the photo shoots among the ice, but still a third of the group bathed in the icy waters of the lagoon. Really crazy. I love them. And could believe the forecast and turn around. 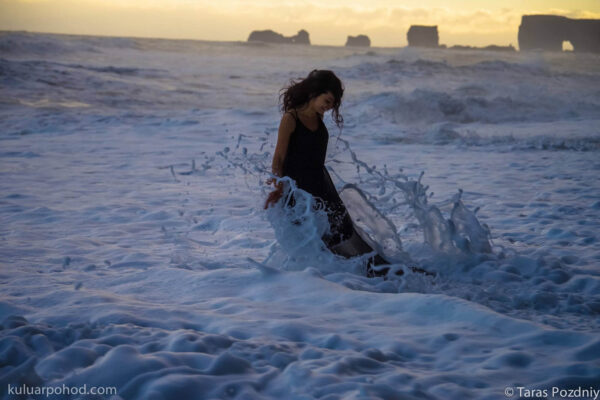 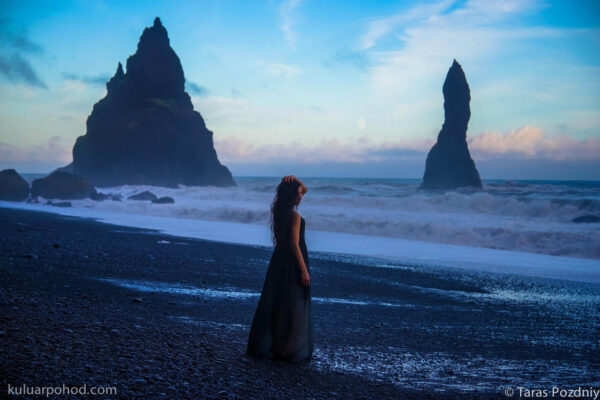 5. Vestmannaeyar Island is a miracle island, easy to live on!
Another place that became a discovery for me. We learned about it on the last trip, from the driver of the car we stopped. On the same hike three participants went there - Natali Boiko, Oleg Khmelnitsky, Oksana Kustova. This time we had two days to spare, and I also wanted to get to the island. But the weather and its forecasts. In the morning on the lagoon again gathered in the rain. It seemed better to go to Reykjavik, where everything is familiar. But we are determined and already a scholar of the hike. We try to learn our lessons. We disembark in the middle of the field, at the turn to the port. Yes, it is an island and we have to go there by ferry. It starts to rain, we spend two hours waiting for our bus, playing games and fantasizing about the sun on the island. And you know what, fantasies tend to come true! The weather on the island is nice and the skies are blue. The doldrums and the cozy campsite. A hot volcano and thousands upon thousands of cul-de-sacs. Mackerel rolls in the harbor and the cafes have delicious lobster soup. In general, the place was heavenly and worthy of a separate post. All dried up, impressed and happy. But we could have gone straight to Reykjavik. 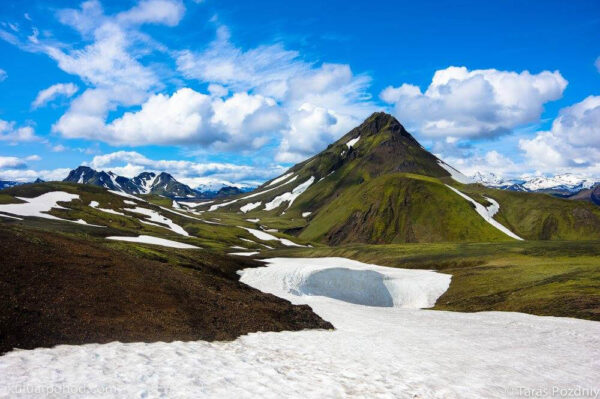 That's the kind of lessons we learned on the hike. For the next two weeks I am at home and I will try to post photos by day, with short stories. After all, I also had a new camera. And I drained 5! batteries. How is it possible? By the way, my camera got rained on all the time and lay in a wet backpack. But it stood up well to all the incidents, the only problem was that the lens got sweaty on the island, but after an hour and a half it got completely cured and you could continue taking pictures. So, so far satisfied)