TREKKING TO EVEREST BASE CAMP
Nepal
Author: Tatiana Samborskaya, 49, Moscow, Russia
Teamleader: Maxym Khomiakevych
Overall rating
Teamleader rating
Manager rating
I was tired of meeting the New Year according to tradition with salads, tangerines, and a Christmas tree. I wanted unusual and bright emotions. Such impressions that would remain for a lifetime, such photos that when I look through them I will relive the most interesting adventures again and again.

And where can the most unforgettable adventures happen? On a trip, of course! In a hike, of course!

The choice fell on trekking to Everest base camp.

You will ask why? I’ll answer: – Because it’s unforgettable to meet the New Year under the stars and with a view of the most majestic peak on the planet!

It didn’t take long to prepare for the hike. The Kuluar website has a detailed description of everything you need to put in your backpack, what to be prepared for, and what to pay attention to.

I’ll skip the details of the flight and continue from the moment the plane landed in dusty Kathmandu. Some time was spent on the formalities of crossing the border – filling out the questionnaire (machines do it, it’s easy), paying for the visa and passing through passport control. At the exit of the airport building we were met with a big smile by Maxim Khomyakevich, our guide.

Despite his “young” age, Maxim proved to be a real pro. He carefully examined the contents of our backpacks, recommended we better equip ourselves, and then he helped us with the shopping.

In the evening we had a briefing and got acquainted with the team, and in the morning we left for the most extreme airport in the world, Lukla. What makes it so extreme is that the runway there is only 400m long instead of the 2000m long as it is the norm around the world, moreover it is located on a steep slope and surrounded by mountains. The pilot has no right to make a mistake and no possibility to make a second circle. Such a flight – a nightmare for the aerophobe)))) But there are no other options, and all the trekking and climbing in the Everest region starts in Lukla. 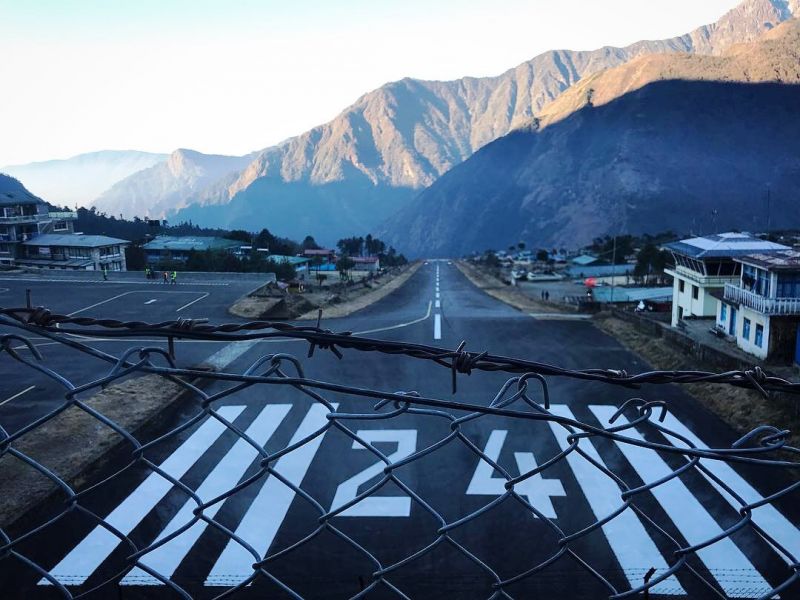 The weather favored us, and we landed at Lukla airport without incident, and after a short stop at one of the city lodges (a shelter on the route, much easier than a hotel, but there are double rooms and beds with clean linens. No heating) for breakfast our trekking began. The first hiking day was the easiest. Our backpacks were carried by porters, the scenic trail looped downhill, not uphill, because Lukla is at an altitude of 2860 m and our first overnighting place was the village of Phading at 2600 m.

The next day is a real trekking day.

We go to Namche Bazar, the capital of the Sherpas. The kilometer distance is 10 km. On the way we pass several hinged bridges, among them the Hillary bridge, famous from the movie “Everest”. The weather is wonderful. This day we saw Everest for the first time.

After a steep ascent we arrived in Namche. The town is situated amphitheatrically on a mountainside at an altitude of 3,440m. Donkey and yak herders from the surrounding villages bring their caravans here. On Saturdays, a large bazaar for the locals, the rest of the city for tourists. A large number of lodges, souvenir shops, cafes. The cobblestone streets of this ancient town has never known a car tread. There is no ground transport in high mountain Nepal. Everything you need to live is transported either by animals or humans.

We stopped in Namche for two days to acclimatize.

But we do not sit still, making radial hikes into the mountains above Namche for a mild acclimatization. We visited several monasteries, including the monastery with the famous Yeti scalp. We climbed 4000m (a place of incredible beauty) to the monument of Edmund Hillary (the first climber of Everest) and stopped for tea at the only five-star hotel in the region “Everest view point”. 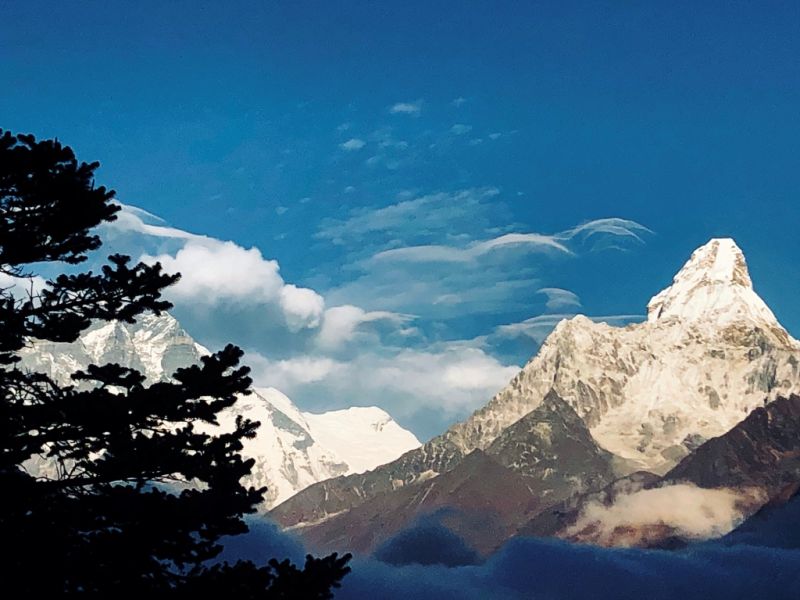 In the mornings and evenings we measure the level of oxygen in the blood. Today I have 96% of my normal 97-99%. For this altitude it is ideal.

After Namche we continued to the village of Tyangboche. In the evening we checked into the lodge and ate lunch, went to a local monastery. We didn’t make it to the puja, but we were allowed to look around and take pictures. 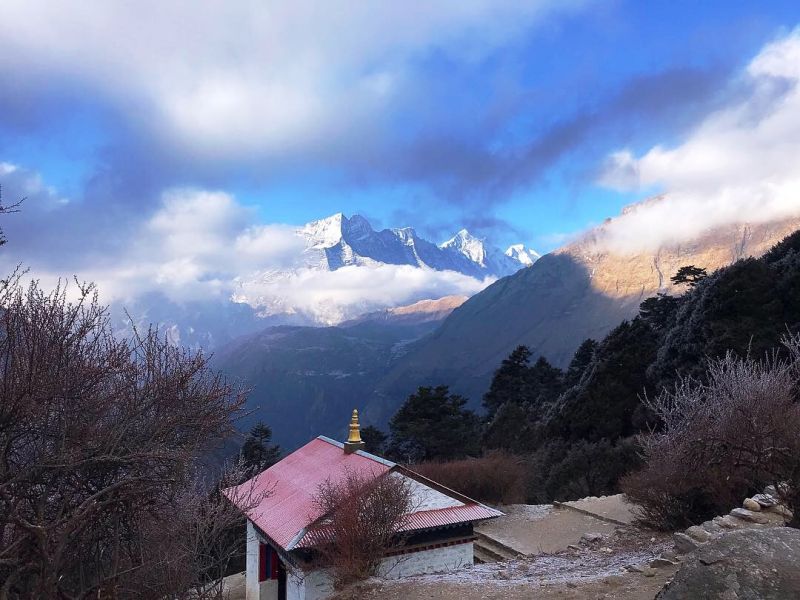 From Tyangboche we go to Dingboche. December 25 is on the calendar – Catholic Christmas Eve. Even in the mountains there is a holiday atmosphere. Along the way we keep coming across trekkers in striped gaiters and red Santa hats. Santa with a backpack! Where and when do you see that? Today, instead of “Hi!” the only thing said when meeting on the trail is “Merry Christmas!”

After Dingboche, our team is -1. To everyone’s dismay. One hiker was evacuated by helicopter due to the onset of mountain sickness. The day before Max Khomyakevich stayed up all night trying to help and giving injections, but by morning it was clear that we had to call for a helicopter.

We had already spent the second night at the altitude of 4400m.

During the day we descended to Nangkartshang which is 5073m (higher than Kazbek) and I feel great. 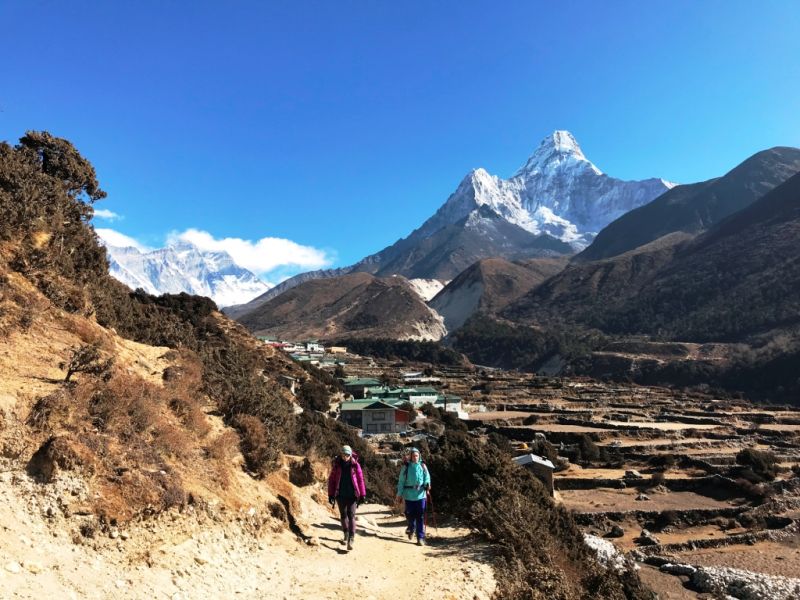 Next, after Dingboche, the plan is Lobuche and overnight in the pyramid observatory, where heating and hot showers are expected. In the meantime it is -23 outside. I can’t tell what the temperature is in the room without heating, but water, lotion, cream and even toothpaste are frozen. I have to get out of the sleeping bag, so I muster all my will into a fist. I jump up and do the army standard of dressing in 45 seconds. Isn’t it a young fighter’s course? And then there was the exercise on the street. I couldn’t make myself do it. But Max strongly recommends it. The best adaptation to altitude is movement.

And here we are, guests at the “Pyramid” at an altitude of 5050m. There are hot showers, internet, delicious food, free outlets, and even a hair dryer! We’re almost in paradise! Almost, because the rooms aren’t heated after all. But for today, it doesn’t really matter anymore. There are heated common areas and even a TV with the Discovery Channel. I wish we could stay longer, but no, we have to keep going. Everest is waiting for us! 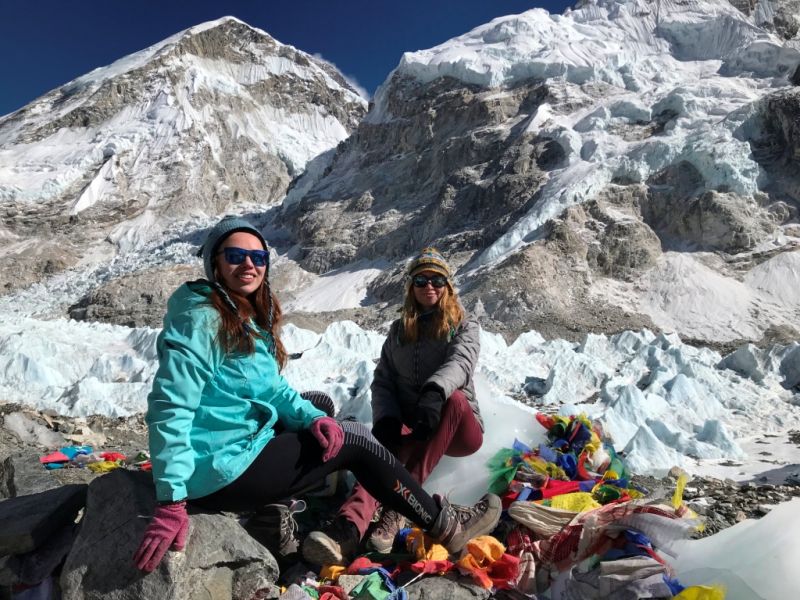 We made a Christmas tree out of trekking sticks, and garlands out of headlamps. We had firecrackers, presents, and gingerbread. We didn’t need any alcohol at this altitude. We had a very hearty New Year celebration and ascented to Cala Pattar (5643m) closer to dawn.)

A few hours for sleeping. To get warm soon, I put heating pad in my sleeping bag, as well as the clothes I was wearing on the ascent. I woke up in the middle of the night because the heating pad was leaking and my legs were in a puddle. In a panic I jumped up and rushed to get towels to soak the water. But soon gave up the idea. If the sleeping bag got cold and frozen, there would be nothing to sleep in. Spare clothes were easier to find. I climbed back into the wet, but still warm bag, and in the morning I was surprised to find that my clothes and the sleeping bag were dry. A New Year’s miracle.

We set out after dark, at 5:00, putting on our warmest clothes. We had to reach the summit before dawn. Climbing up and at some point it even gets hot. But not for long. The higher up, the windier it gets. My lips are cracked and my face is puffy from the cold. Once up, we enjoy the stunning views and the sunrise. The dawning day of the new year surrounded by some of the most majestic peaks on the planet. It was the most incredible experience! We were terribly cold and very tired, but if you ask us: Will you go to the mountains again? – unequivocally, yes!