Trekking to Annapurna base camp - trek to Annapurna
Nepal
Author: Leonid Vorobiev, 22 , Ukraine, Donetsk
Overall rating
Teamleader rating
Manager rating
Once again I am convinced that everything that happens spontaneously and regardless of the circumstances, brings with it only the most interesting and necessary. In other words - destiny.

That’s how the idea and the trip to Nepal came about. For the first time I went abroad, for the first time to the Himalayas, so harsh and high. I was connected with Taras by chance, and it turned out that we had more than just common interests in the form of mountains:)

So, having met him at the airport in Kiev, where I also happened to be for the first time, my journey to the mysterious Nepal began.

When I arrived in Kathmandu, I, like everyone else, was struck by the way of life there, the way of life and, of course, the traffic on the roads. All of this is very exotic, and causes at first apprehension, then interest, and then you gradually get the pleasure of being in Nepal.

I wanted terribly to go to the mountains, I wanted my body to work hard, to the limit, and my soul to rest in the meantime. By the way, one of the answers to such a stupid and rhetorical question: “Why do you go to the mountains?”

The mountains began with easy climbs and transitions, with green slopes and rocks, mountain turquoise rivers, and a comfortable climate. Everything was going in the best way. And of course every day we went further and higher. The climate was changing, becoming more severe, only the atmosphere in our team was not changing, it was sunny, warm and friendly all day long!) 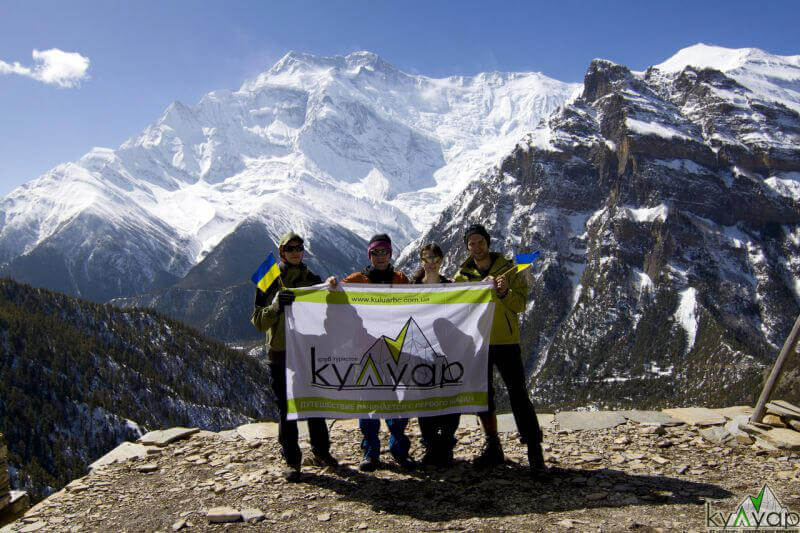 Everyone was hiking in anticipation of the Torong La Pass, talking only about how the weather would get better and it would be open, and whether it would be warm or cold there, how we would survive the altitude. But we had to reach it, and to do that we had to live for the day. By the way, another truth that is revealed to us in the mountains. We can talk about landscapes for a long time, but is there a sense in it. Everything becomes clear after the first photos. I myself forgot to take photos with my device, and I just walked forward, in a kind of trance, from the mountains, from that atmosphere, from the peace, fear, admiration and feeling of obedience to the mountains. There is something in it that cannot be explained in words…and you feel it only there and understand that you are alive. 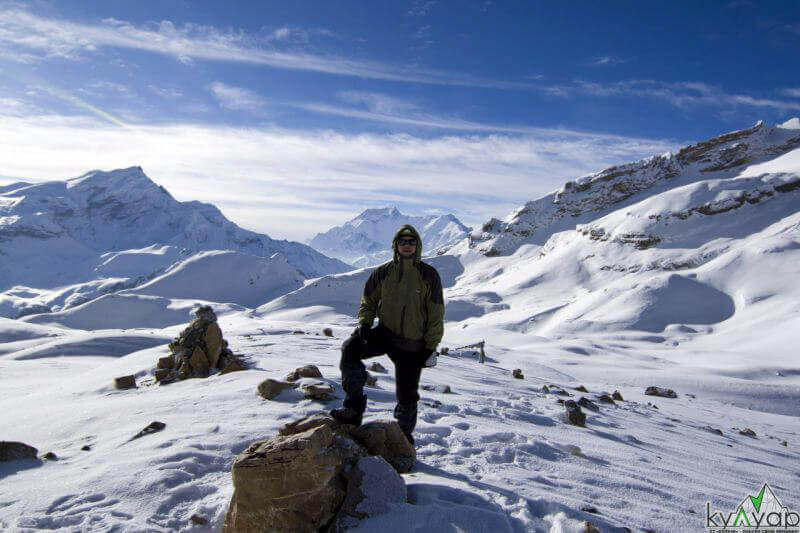 However, the altitude began, we crossed over 4 thousand meters, and every harnessing under the backpack, and throwing it off the back of the tourist, many began with the phrase “Oh Fuck!” Here hot tea was like a breath of water in the desert, and the warmth of the evening from the oven with smoldering poop yaks, was as pleasant as thoughts of home.

What I liked best was the isolation and a kind of vacuum for myself personally. You go during the day, rarely talking to someone, often just alone, the only thing with you is the pounding of the temples, kilometers of weight carried, thoughts of the mountains, something eternal, something high and divine, converge on the most simple – on homemade sausage 🙂 And you come in the evening to the loggia, and you are waiting for the same thirst, for those with whom you can talk to, and for your honestly earned piece of fried yak.

On the ascent to the pass at 4 am, after dark, there is no romance. Everyone is silent, quietly creaking boots, rubbing his fingers, trying to warm them somehow go, go, go. And there is a beauty in it. On the approach to the pass, Torong La and Taras felt all my love for the mountains, for hiking and for myself. Fantastic. After climbing the pass. fatigue, weakness, headache, and everything that was so hindering the walk disappears. And you would take off, only my hands were frozen:(.
Next up the pass was a descent, a hill ride, but it didn’t matter!) 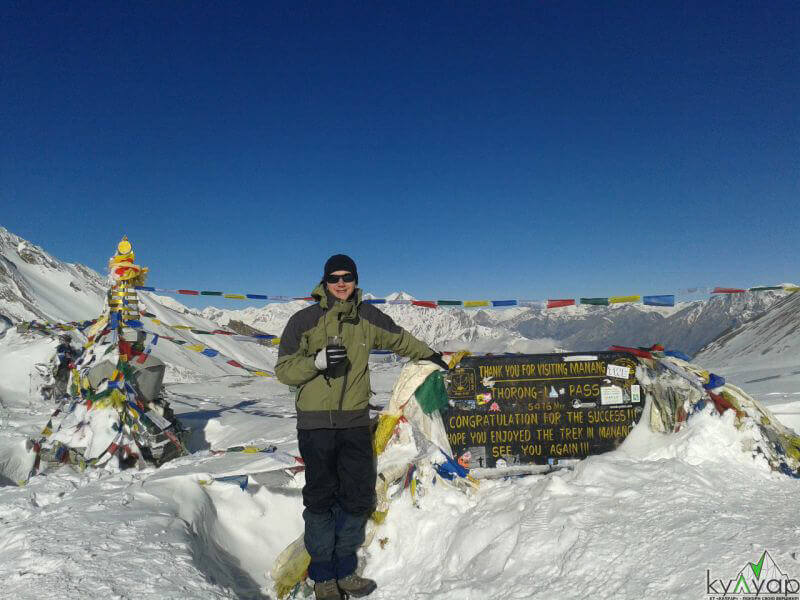 Now everyone was talking about hot springs ! Twenty-four hours later we were there, there were oranges blooming, a variety of flowers, warm air, milkshakes, beer, apple vodka and complete relaxation in the hot pool with great company and talking about everything.

Then there were the damn steps, the runny nose, and the incomparable Poon Hill. Standing, on the observation deck, you feel like the opposite. not a spectator, but the one being looked at, the whole panorama of these eight thousand-year-old monsters, waking up from the rays of dawn looking at you, intently and long. You don’t often feel the gaze of eternity on you…
Having put aside lyricism, we moved forward where we were to be divided into those who had enough of mountains and those who wanted to honor the memory of Anatoly Boukreev at the Annapurna Base Camp. As a result of a cold and cough I was in the group of those who were turning to the “bustle of the cities” and as it turned out not by accident.

We may have lost a few more glimpses of eternity, but we made it to Pokhara for the Holi (Bengali New Year) color festival. It was one of my dreams, shall we say. It was an accident?) I’m a fatalist, and I believe in fate… So we decided to make an impromptu trip and went to Chitwan, the National Wildlife Park, where another of my childhood dreams came true – to ride an elephant! What can I say, I was as happy as a baby:) 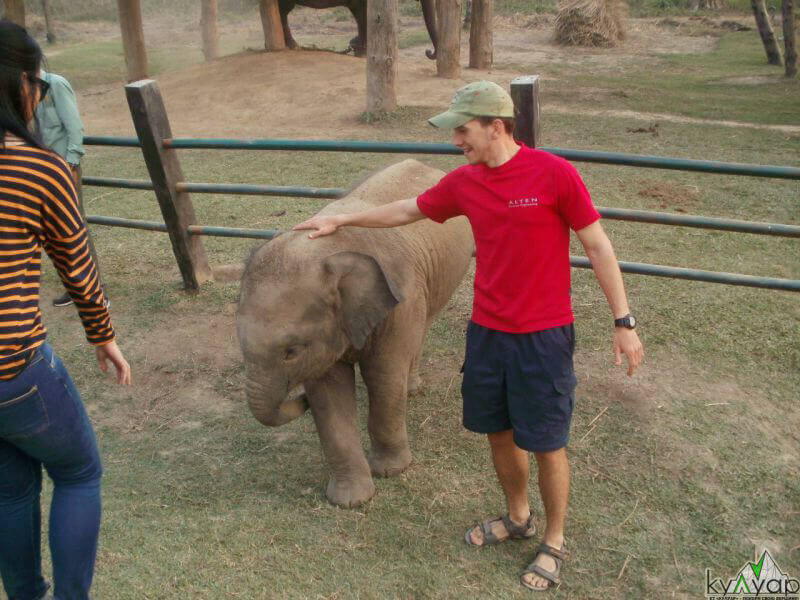 That was the start of our journey home to Kathmandu, followed by airplanes, airports, check-in, controls, and connections. But none of that mattered after those emotions and impressions.

I’ll insert a quote from Vysotsky in the epilogue:
We crawl, we hug the bumps,
We squeeze the bumps in anger and dislike,
And with our knees we push the Earth
From ourselves, from ourselves.