Confessions of an Amateur Backpacking in Mingrelia - wild corners of Georgia, the Toba lakes💚
Georgia
Author: Elena Matiyevskaya, Belarus, Minsk
Overall rating
Teamleader rating
Manager rating
"If a friend was suddenly..." was the song in my head, when I was in tears, unable to see anything in front of me because of the falling wet snow in September 2016, on all fours climbed the remaining, as I thought, 100-150 meters to Hoverla among the last. But I made it up.

I was one of 7 desperate people who came from Minsk and decided to climb the highest mountain in Ukraine. So passing through. I was alone, with no acquaintances on the climb. I was scared, I realized how much foolishness and recklessness I had, my whole life flew in front of my eyes. I was the third of the big group to go down, and if I had known the way down, I would have been the first.

NEVER AGAIN. Those words stuck in my brain as if they had been scorched with hot iron. And for two days of the rest of the trip, I stared blankly at the sights. DURA, I texted on my sister's Twitter account.

And then I came home, my friend met me, without asking any questions, seeing my disheveled look, just hugged me tightly and didn't let go for a long time. In the evening with a glass of wine I had an emotional long story about my ascent: about fear, about difficulties, about strange people who helped me in every difficult situation, about unpreparedness mentally, physically and technically, and about BEAUTY and UNPRETIMITY of Carpathian landscapes which I could not appreciate, but now I remembered. "So, never again?" the question was asked. "Only to the mountains, but higher," I answered.

And going to work after my vacation, I typed in "hiking in the mountains" on the Internet. Several hiking companies came up. Following instinct rather than common sense, I went to the website of the company "Kuluar" only because I love the color "green. Immediately I signed up for the site.

"Wild Corners and Lakes of Megrelia" June 24-30 - after reading the descriptions of all the routes, this one was chosen immediately. The altitude of the mountains is higher, I have never been to Georgia, this is the first hike on the route. The application, if I'm not mistaken, was filed in November, the tickets were bought in January, and the hike at the end of June. There is time to prepare!

Printed out a list of necessary gear, started shopping and putting the weight against the list. Thanks to the club guides for the equipment posts, they came out very detailed and, most importantly, on time. So was purchased a sleeping bag and trekking boots. It was just not clear whether I could cope physically. I started to run in the morning (sometimes) and hike 8-10 km on the weekends - as it turned out later, it was not enough for a beginner.

And here I am in Georgia. "Kuluar" takes care of its tourists and sends a pre-walking letter with a detailed description of the meeting. I will tell you frankly, I fell in love with Sergey Gnatovsky, our guide, from the first day of interaction on Vyber.

- Take: a jacket, a hat and warm socks! - That's Seryozha. I realized that they wouldn't let me get lost.

Our small group of four tourists gathered in Muhuri. After half an hour of talking it seemed that everyone knew each other. Hospitable hosts, delicious Georgian home cooking, atmosphere of kindness and tranquility, a long dinner, flocks of flying fireflies - a magical sight, and the sky... The sky in the mountains - one can write about it endlessly - it's boundless, deep, with an incredible number of star clusters; the milky way attracts and does not let go, you forget why you came and you dissolve in the unearthly beauty!

Five people: Sergey - Kharkov, our guide, Alexei and Svetlana - Moscow, Tatiana and I - Minsk; the entire staff. And a nice bonus - a gift from "Kuluar" summer buff - thank you very much. 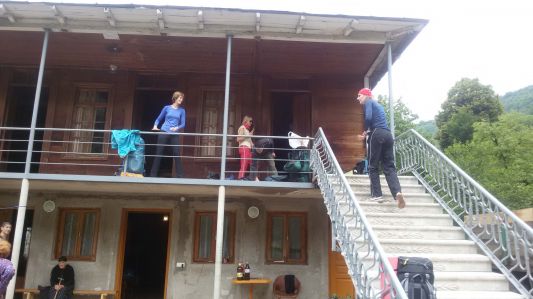 Day 2. In the morning the truck began our "ascent". Do not refuse such help. A trip along the serpentine saves strength, allows you to see and appreciate the beauty of the scenery, the skill of the local drivers, to exchange jokes, and to tune in to the ascent. We drove through an area of dense rainforest with an abundance of flowering rhododendrons, not without obstacles. At one section of the serpentine road there was a rock and stone collapse and we waited for an opportunity to pass. The mountains set in motion their process of testing the hikers. 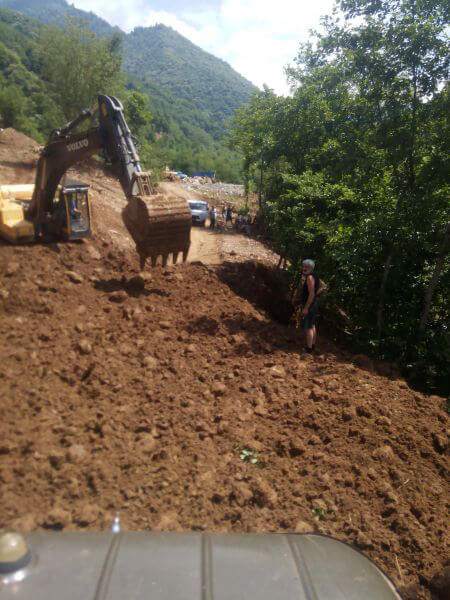 I don't know at what altitude the hiking stage began, but after a short walk we left the tropical forest and entered the alpine zone, another 20 minutes and the first parking spot. After setting up our tents, we walked around the area, soaking up the ringing air and enjoying the beauty of the mountain landscapes of Megrelia. 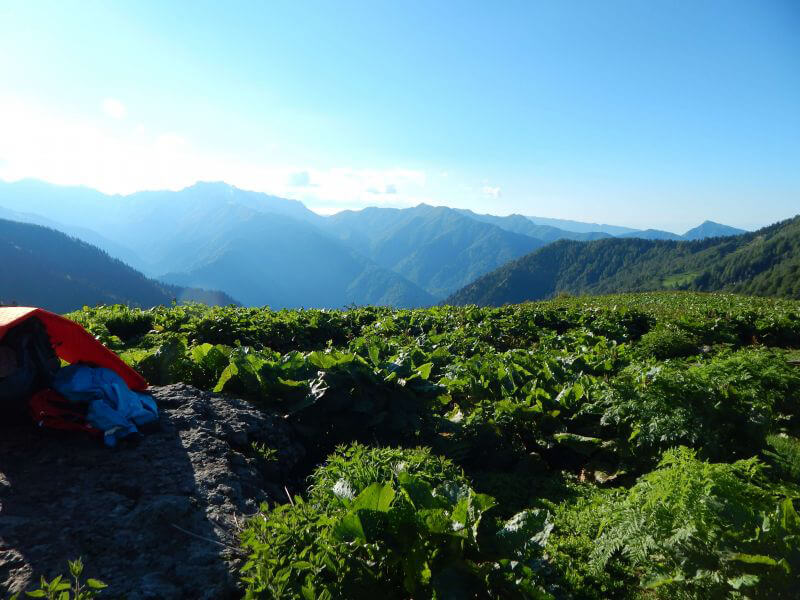 Day three. Morning, hearty breakfast. Sergey shows us the direction of travel - a little bit upwards, then a turn, and after that a pass. Our group was lucky with the weather, looking ahead I can say that almost the whole trip we had bright sunshine, generously intensifying the colors. Our next overnight stay was planned at Ohoja Lake, which got lost in the mountains. After packing and repacking our backpacks, we hit the trail. This day was the hardest day of the hike for me - emotionally and physically. I had never been on such long hikes, and with such a heavy backpack - about 17 kilograms; I was the last one in the group, and seemed to be slowing down the whole team. I had to get used to everything and get used to everything. At one of the sections of the slope I had climbed on all fours, on a steep enough slope, my foot twisted. I hit the rocks with all my weight, hanging on my hands. The pain was horrible to the point of blackening my eyes; tears were pouring down, either from pain or fear. I have no strength to catch my legs and pull myself up. The guys are moving forward. Hysterical laughter began. I remembered Pugovkin with a piece of sausage on the precipice of the mountain, "I'll give you everything, just take it off", I screamed and the guys turned around. Sergey and Lesha took off my backpack first, and then dragged me up. Thanks to them. The entire route someone followed me, watching over me and giving me confidence. Here comes the turn and... where the trail runs, there is an endless expanse of snow. We had been warned that a meter-long layer of snow had fallen a week before the trek and covered all the passes, but what we saw took my breath away. The whole horizon was snow, mountains and sky.

And then the climb up the snowpack began. It was a long way to the first pass - the Tsatsqibuli Pass (2750 m). Someone was paving the way, it was difficult, the others were following footsteps, I often missed and stomped on my path. We followed one another in a serpentine fashion. Svetlana was the only one with trekking poles; she climbed and passed them to me for stability and to ease the climb. The higher we climbed, the cooler and the stronger the wind became. The group made small stops for rest and for me to catch up. We were grains of sand among the rocks and snow. But each of us was encouraged by the smiling sun and the assurance that they would not leave you in trouble. On one of the boulders among the snow we had a snack and continued on our way. Ahead of us the pass beckoned. 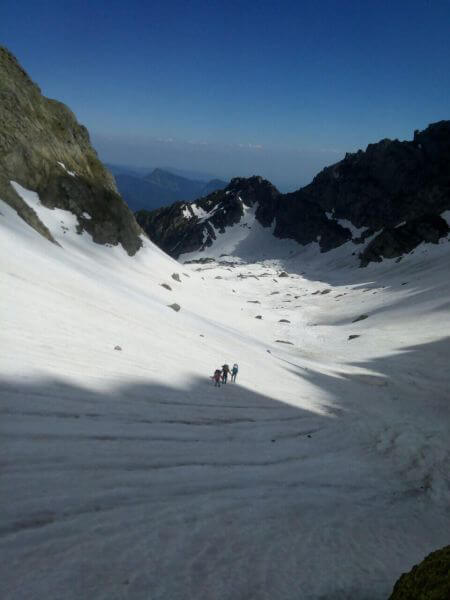 What a magnificent 360-degree view opened before us. It was the first victory for me - over the altitude, over my fears, and, most importantly, over myself!  Such moments are worth living for! And there was also a greeting from Couloir - a very timely, delicious, nutritious, signature bar. Thank you. And there were stunning photos, and I, okay, colored the background. 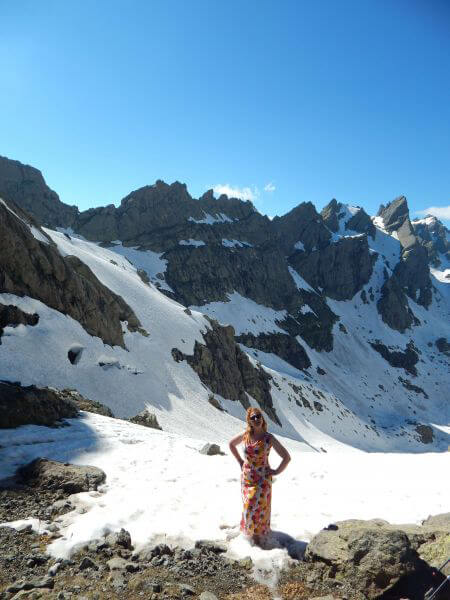 And below is Lake Ohodzhe. 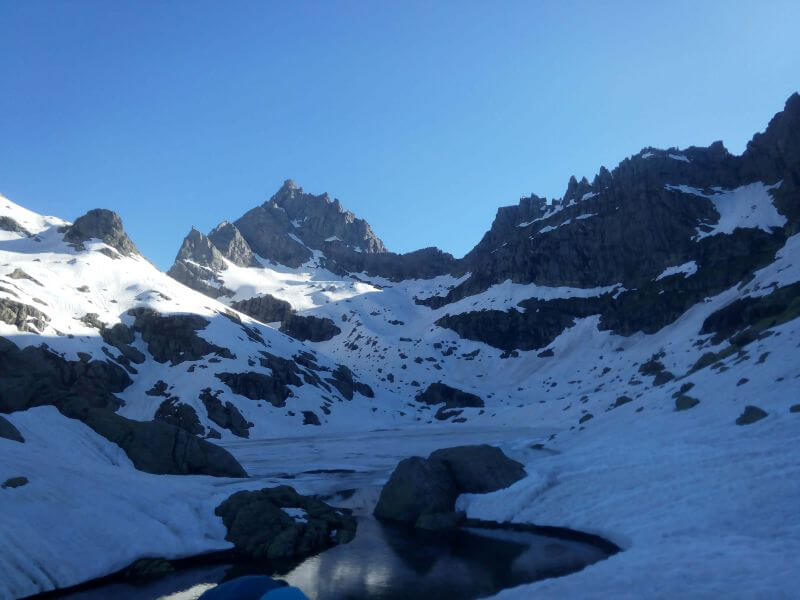 I got the impression that I was in the realm of the Snow Queen: the sun was setting, the lake covered with snow and ice glittered with colored crystals, and in a small thawed spot the rugged mountain peaks were reflected. Our bathing suits didn't come in handy. After dropping altitude a bit, we made our way to our overnight stop. The only spot free of snow that would fit our tents. 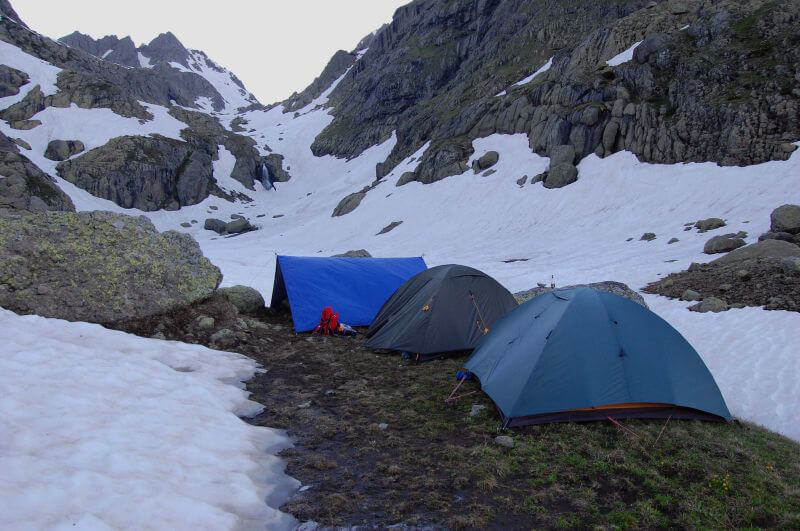 Day 4. Ahead of us awaits a large and charming lake Tobavarchili, which is located in a secluded place among the rocky peaks at an altitude of 2650 m. The way to it is through the East Toba Pass (2,880 m), so not every tourist can boast that he saw this pristine beauty with his own eyes. And we are the real lucky ones! The lake is like a pearl surrounded by snowy splendor. 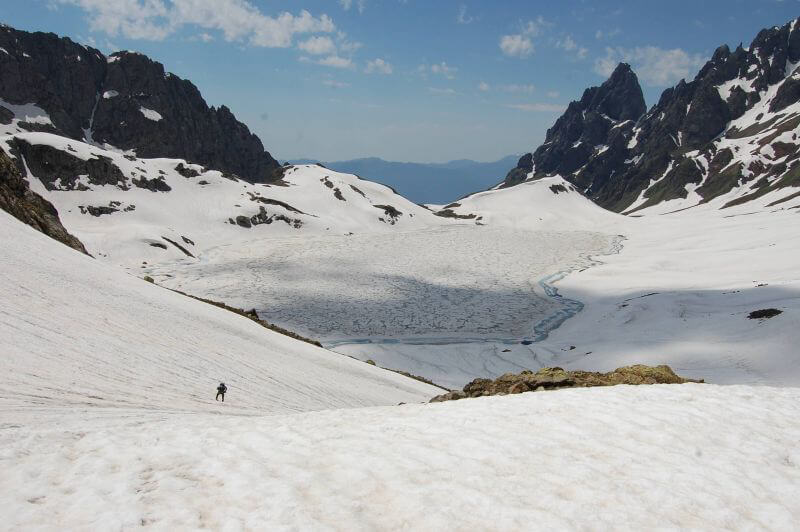 I will always remember the descent from the pass. In order not to waste time, the whole group, except for the responsible guide, sitting on backpacks, like on a sledge, safely rolled down, braking with their feet to reduce speed. Sun, snow, speed - 15 minutes from childhood. Fed up with adrenaline, a quick snack, we descend into the valley, greeting us with flowers. 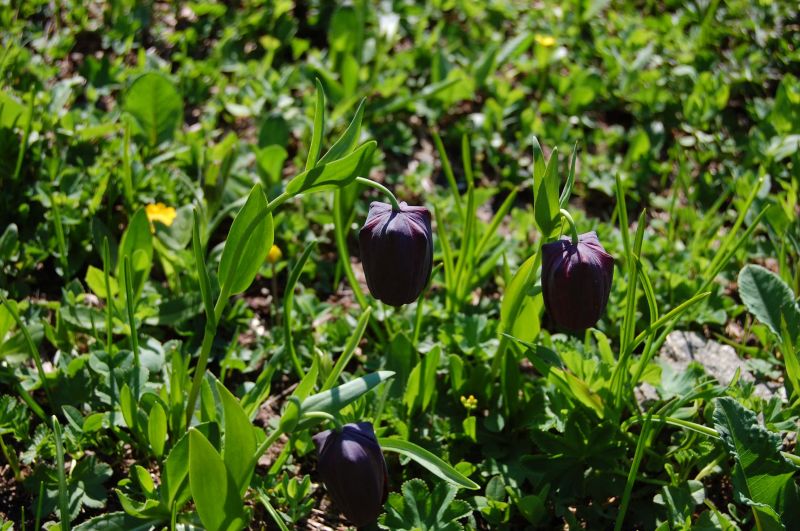 We would spend two nights in this beautiful place. The valley of nine waterfalls was beautiful.

Day six. Resetting the altitude. Overcoming steep cliffs, many mountain streams, and empty shepherds' houses, we descended to spend the night in the Magana River valley. The mountains gave us another test. From the heavy melting of the snows, the river blew away the crossing. We had no tools or ropes with us and we would not have been able to cross to the opposite bank, but the mountains welcomed us. A group of scientists, accompanied by an interpreter and guides, were coming from the opposite bank to our side. The men, combining their efforts, made temporary bridges in about three hours. Everyone ended up on the right side. 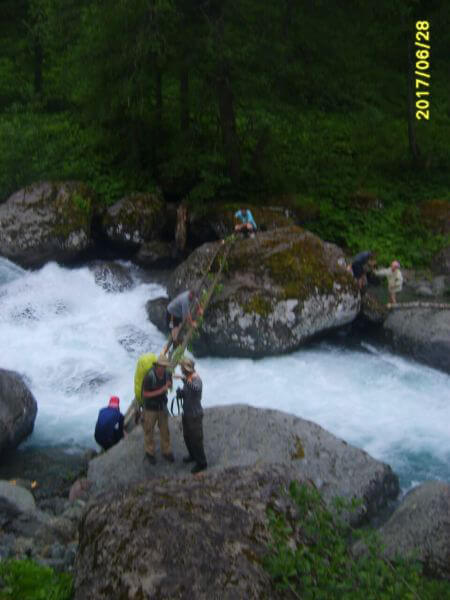 Day 7. Return. This was the longest crossing. We were driven by the light rain, a desire to take a shower and enjoy the company of the local people. The endless climbs and descents, rivers and streams, tropical forests, thickets of rhododendrons, fatigue and a desire to get there as quickly as possible did their job. By evening we were in Skuri, for the tourists' information, there is Beria's dacha there. And HORA, a car came to pick us up. A warm greeting, endless help, a refreshing shower and an abundant, generous table of Georgian food, a retelling of the hike, extraordinary toasts, smiles and words of gratitude. The hike is over.

Thanks to everyone: the Kuluar Club, the trail friends, the people of Mukhuri village, and the generous mountain sunshine. I am going home and will keep in my heart a piece of my love for this wonderful mountain country.

I want to go to the mountains, but higher.