Backpacking in Mingrelia - wild corners of Georgia, the Toba lakes💚
Georgia
Author: Lyudmila Solovyova, Russia
Teamleader: Maryna Ruban
Overall rating
Teamleader rating
Manager rating
At first I was interested in the Kuluarhod site. Beautiful, interesting stories about hikes, colorful photos. Detailed instructions about the hike. I chose an inexpensive and exotic hike to the lakes of Megrelia. I have never hiked with a backpack before. In previous hikes, things were transported in a minibus.

Next, an affordable price for the hike. When the decision matured, there was positive contact with the manager Maria.

There was a difficulty before the hike. I did not have enough money to buy a tent and a sleeping bag. And how good that I was given these things to rent.

We had a new guide before the trip. After learning that the young Marina Ruban would be there, I immediately decided to be her faithful assistant. But there was no need. In a good sense Marina was quick, energetic, enterprising, businesslike, in general, a lot of positive qualities. This is the main luck of the trip.

I slightly delayed the trip because of my late departure, thanks for the patience of the whole team. And the trip started with a minibus transfer to the village of Muhuri. It was like a colorful action in the best Hollywood movies. At high speed through scenic roads. Then we had dinner and a sleepover at the house of a local resident, Zoya. Real hospitality in Georgia. Very nice! In the morning we put our backpacks full of food and got into the Uzik.

Uazik and drove up the serpentine road to the mountains. If only this trip alone was in the program, it will certainly be remembered forever. It was breathtaking from the view around! 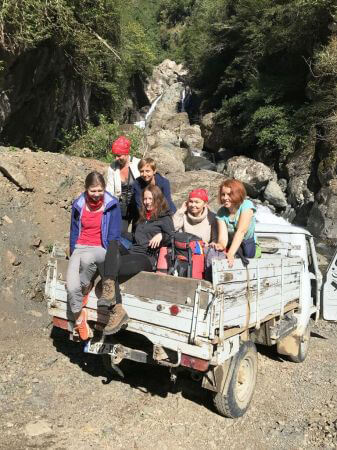 After saying goodbye to the Uazik, we were going to walk, but we met the builders of the mountain road. Thanks to the charm of the guide, they drove us another half kilometer into the mountains in a Kamaz. It was a long distance for a person with a heavy backpack! They did not take money from us. Again, a huge gesture from Georgia!

We arrived at a picturesque glade, cooked a delicious dinner and sat around the fire.

The next days went according to plan. I was getting used to the backpack, to the unfamiliar load on my joints. But all in pleasure! The descent from Tsatskibuli Pass proved to be difficult. I had to walk on the rocks slipping under my feet, it was frightening, very scary. Marina came to the rescue. She showed me how to overcome the descent. And now the way reminded me of some kind of attraction. The reward for a hard day was the fantastic Lake Ohoja! You could say the landscape was cosmic! I had never seen anything like it. A night walk around the lake added to the emotions of the endless starry sky and the bright moon! 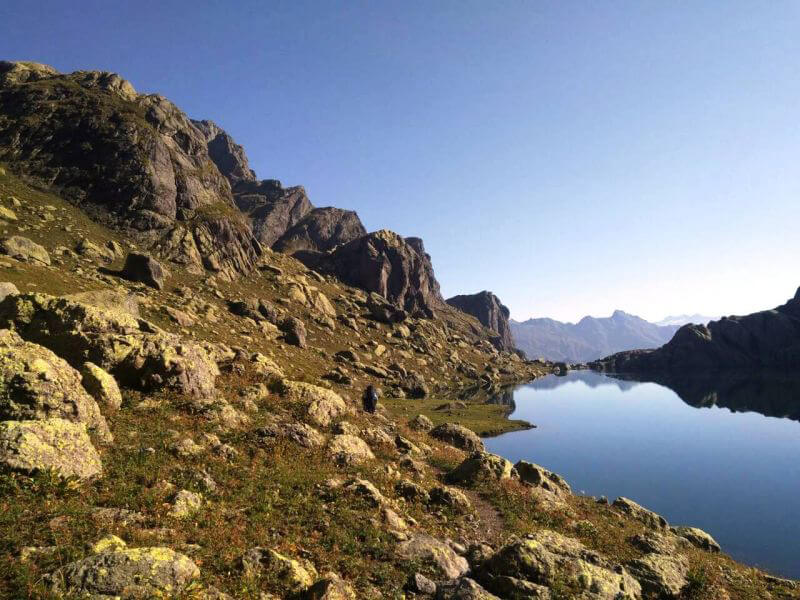 The next day we came to Lake Tobavarchili! Big, clear as a diamond surrounded by alpine mountains! There's nothing more to say! 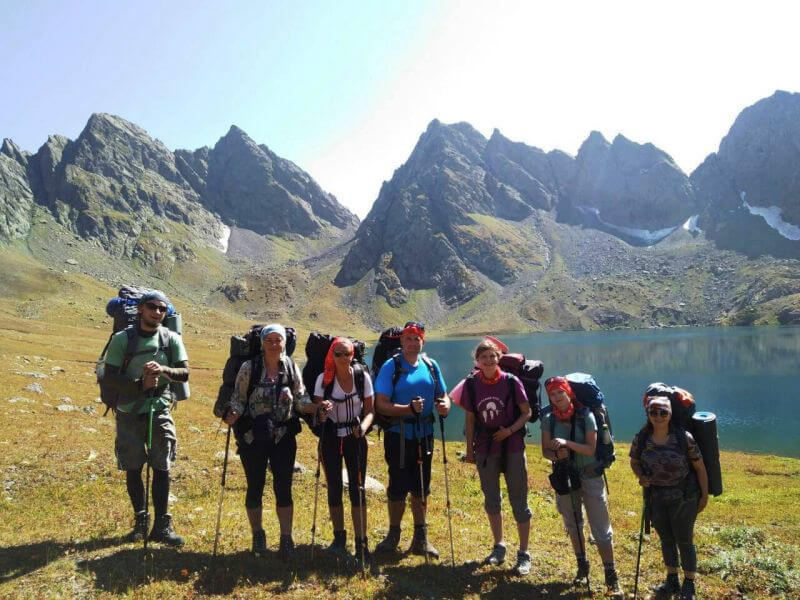 The next day was a difficult and dangerous descent! The river at the bottom of the mountain looked like a thread, the altitude was breathtaking. Thanks to Marina, the descent was safe and not difficult! Yay!

That evening we camped by the river near the shepherds' dwelling. We were invited to visit. Our kind new friends warmly welcomed us, treated us to cheese and cottage cheese. And then they cooked mamaliga according to an ancient recipe. Everyone was fed to the brim. I was allowed to hold a little piglet! 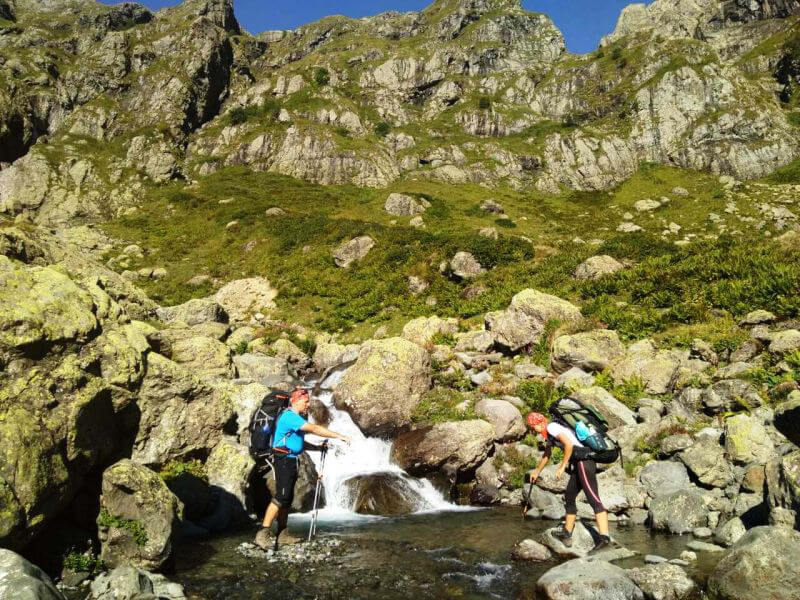 They didn't charge us any money! I took a big bag of cottage cheese and cheese and regretted it. The backpack was just too heavy and the hike became excruciating. My legs were buckling and stumbling at every step. I wanted to throw it into the abyss!

The last night was a hostel in a small village. Everything would be ok, but we were visited by 3 local shepherds. With conversations like "do you respect me", how much you paid, and other mercantile topics. And again, Marina has resolved the situation in our favor. Well done girl! 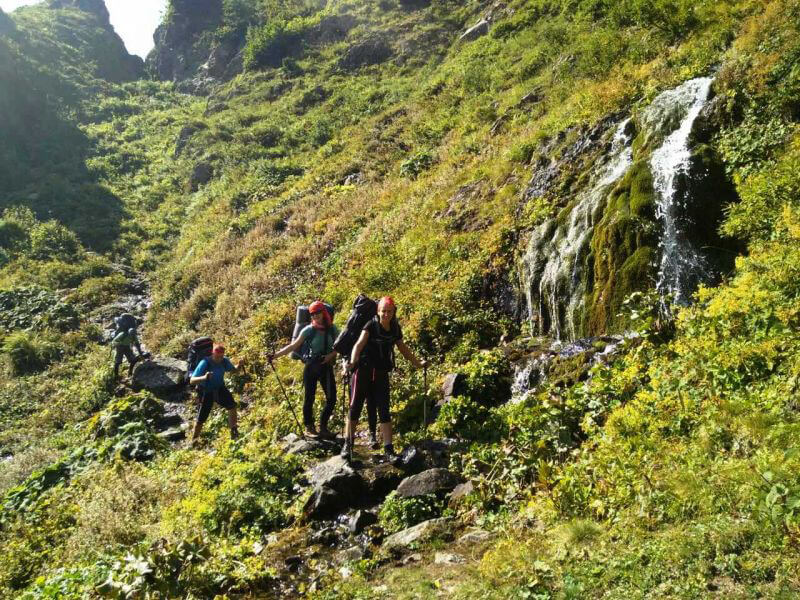 The hike ended in a cozy hostel in Kutaisi.

Honestly, it was hard for me physically, but I was supported by the whole team. Thank you very much for this hike everyone. I will have a little rest and get ready for my next adventure with Kuluar.