Climbing Kazbek
Georgia
Author: Viktor Tkachev, Ukraine, Dnepr
Overall rating
Teamleader rating
Manager rating
The first day of our expedition was very beautiful and hospitable Tbilisi. It's a shame we had so little time here. I hope we will have a chance to explore the city better on the way back. And while we are persevering towards the Caucasus Mountains, I will talk about the key checkpoints of our trip.

The first mountain settlement is Kazbegi, or Stepantsminda, 1,740 meters above sea level. Here we will see the coveted Kazbek for the first time, immerse ourselves in the whirlpool of climbers and finally understand what kind of trouble we are in. After that we start our trekking, and we go to the so called "Green camps", about 3000 meters above sea level. The idea that we will have to spend the night at an altitude almost one and a half times higher than Hoverla - great adrenaline) On the state of the group and weather conditions will be decided on the installation of an assault camp at an altitude of 4000 meters. The start to the main goal of our trip - Kazbek (5033m) will be either from former weather station (3750m) or from the assault camp. After the assault we will descend down. Total - our stay directly in the mountains will be about five days. Together with the beginning of a new week, the active part of our expedition begins. But for now we are simply delighted with the beauty, power and might of the Caucasus Mountains. The road to Kazbegi is marvelous not only with views, but also with extreme views. Then we had a small training hike, with climbing 500 meters and returning back. It's something unreal, such rich colors, such wild nature. And you feel so small against the backdrop of all the splendor. The mountain itself could not be seen at all because of the constant clouds (the rain comes down at least once a day), but you can see the monumentality right away. We hope to get a closer look tomorrow))) In general, our life on the mattresses ends, begins a full immersion in nature. 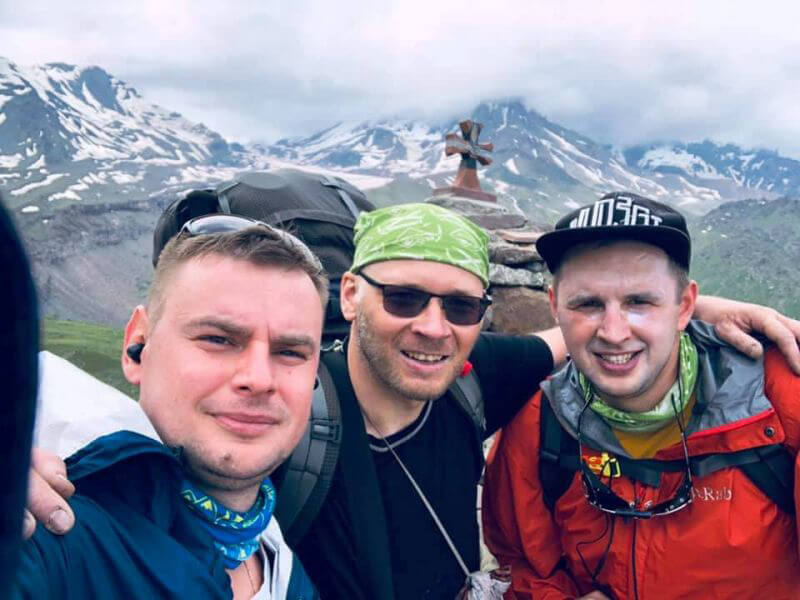 THE FOURTH DAY OF THE EXPEDITION.

Well, here we go!) the altitude of 800 meters, the first 3000 meters of altitude, the first symptoms of the mountain sickness.

It is very difficult to put into a coherent narrative a crazy set of emotions, impressions, thoughts and FEELS of LIFE. But I will try.

Starting from yesterday's monastery, we pretty briskly moved in the direction of our overnight stay at Green Stoianky. Very picturesque landscapes were replaced by even more picturesque, turning into the most beautiful) Blossoming rhododendrons, hot sun and gentle breeze made the perception of the Caucasus very pleasant.

Then small snow gullies were replaced by small ice blocks, the temperature began to drop quite sharply, the mountain streams became more and more aggressive. But all this pales before the crazy view of the glacier, which opened to us at our stop.

About the Green Stands I can say - fantastic! Clouds that float up from below, the view of the Mountain, which overhangs the entire area. Even a small hurricane with hail, which cut our meal - did not spoil the overall bliss.

Tomorrow we will fight the glacier and the mountain sickness, climb another 800 meters, pass the Meteorological Station, and establish a new camp. The main thing is to have enough strength and the weather will not be totally unfavorable. We are waiting for the next day! 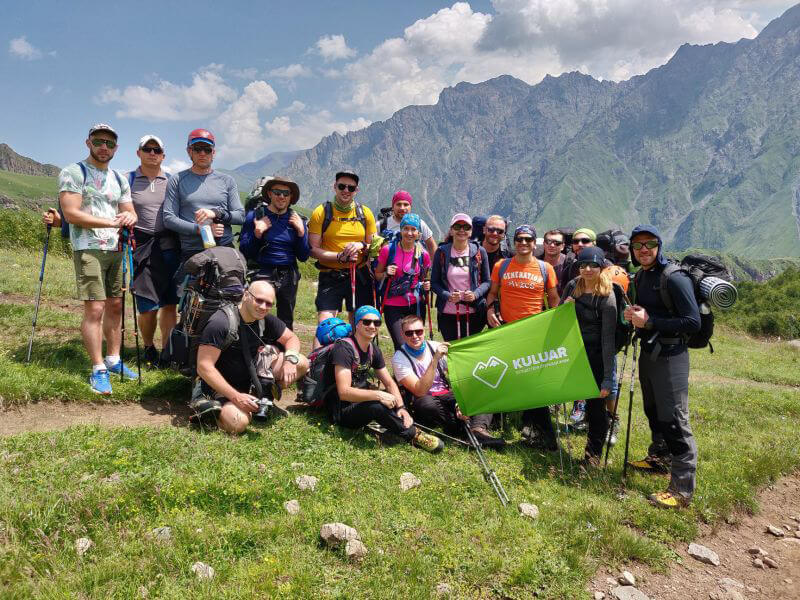 FIFTH DAY OF THE EXPEDITION. 4000 meters!

It's very hard to express how tired everyone was today. It was just on the edge, or even beyond what is possible. But first things first.

From there it was not so romantic. The hike along the chaotic stone ridge was started and the glacier was moving (constantly!!!) in front of you and on the sides. And you have to play a mountain goat with a backpack of about 20 kilograms, jumping from rock to rock. Well and after the ridge - the glacier itself began. Can you imagine the feeling when you jump over the bottomless cracks to the sound of cracking ice. And at the end, already with completely knocked down breath is the steep ascent to the weather station.

Is it enough to be proud of yourself for a long time - yes, but not for us! We settled our camp 200m higher than Meteo, and after that we started the acclimatization trek. And here we are, the first 4000m above sea level!!! By the way, you can get a nice tan at this altitude)

We are waiting for tomorrow, acclimatization and ice climbing at 4200. And further - all according to the weather and state of mind! 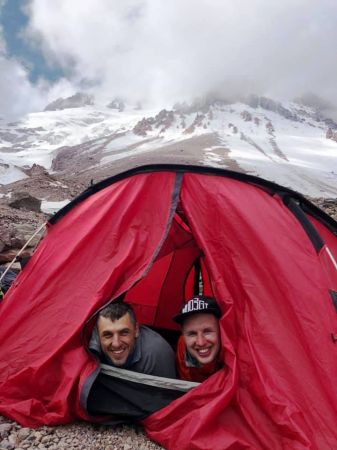 The hardest day of the entire expedition.

The cumulative multi-day fatigue, disgusting weather, mountain sickness and problems with equipment - these were the determining factors of the sixth day.

Everything started relatively well - not an early rise, delicious breakfast, sunshine. Further on we felt the symptoms of mountain sickness. Our brains were not thinking straight, we could pack for half an hour and not take anything. Plus, as soon as you start physical activity you have shortness of breath and lost your pace. 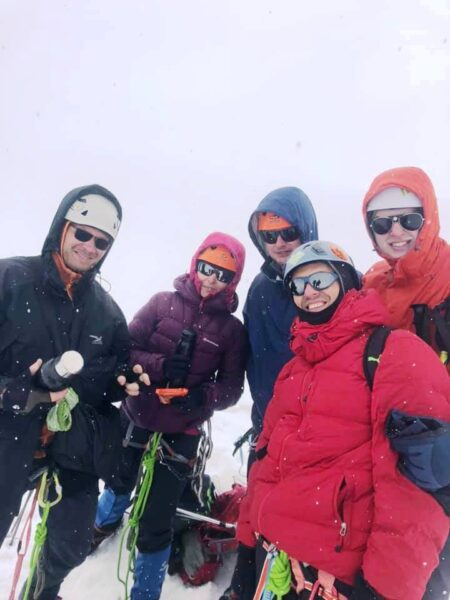 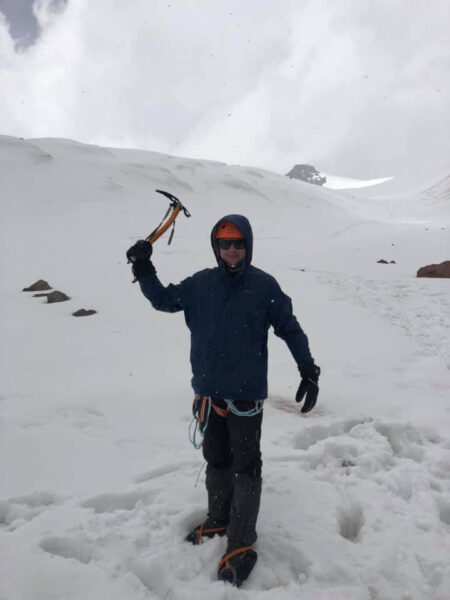 After getting to the point where I had to put on my mountaineering gear, I realized that my fancy trekking shoe, as they say, "asks for porridge. This problem had to be solved before the summit assault. To make me feel better, the weather turned bad almost immediately with heavy hail the size of good peas. Strong gusts of wind came as a free bonus. We climbed 650 meters in 5.5 hours. And such a speed is absolutely unacceptable for climbing. In general we have a lot of questions but no answers. We hope tomorrow will be better!

After yesterday's little despondency in the morning began to lift our spirits) We put on vyshyvankas, the girls from the group put on dresses. In general, there were very interesting photos. 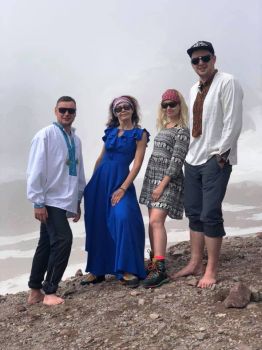 Next - again some mountaineering training, which went much easier than yesterday. For lunch we had watermelon (10 kilos)! And also a folk method to try to repair my boots).

Now - to try to fall asleep at 6 pm, the alarm clock is set for midnight. Nerves, the energy of which should be directed in the right direction. Tomorrow - a decisive battle! 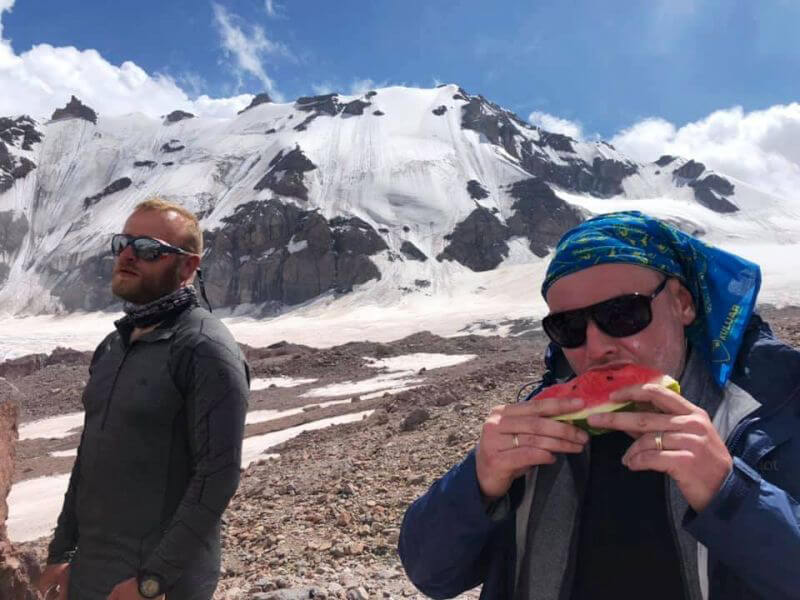 THE EIGHTH DAY OF THE EXPEDITION. The summit. 5033

Waking up at midnight. And here is the biggest feat - this is to pull myself out of a warm sleeping bag in the cold night) Fussy gathering, although everything was packed in advance - and out. Adrenaline drags you forward, and you rush straight to the mountain.

The night hike with flashlights - a separate pleasure. The route is kind of clear, but we constantly have to stop and check where we are going. And the risk of injury increases, so the speed drops. We reach the glacier, put on crampons and start overcoming the chain of long rises.

I can tell you never to be vain. At first the ascent was easy, there were even critical thoughts - why are we going so slowly? I'm so good, I can do more. And then, after 4500 - you start to get mountain sickness. There was such a feeling, that you are sleeping, or watching a film about mountaineering. You are completely detached from reality, you are in the point of view of an observer. It was a very unpleasant feeling, you lose the thrill of what was going on. It lasted up to the arrival to the base camp.

After a series of climbs, finish vertical wall - you go to the top. On a small platform, about 4 by 8 meters, where there is nothing. It would seem, why did you do it all, such a long way with such effort? But you know exactly that it was not for the sake of this platform that you went through such hardships, nor for the sake of the view around you. And you came all this way to get better, to come to yourself. And you're happy)!

The way back - from overworked as in a fog, the camp is greeted by a frowning rain, which turns almost into a storm, such that we even have dinner in the tent. But we will never forget this day, it will stay with us forever. This day is the day of the Summit, the day of Achievement. 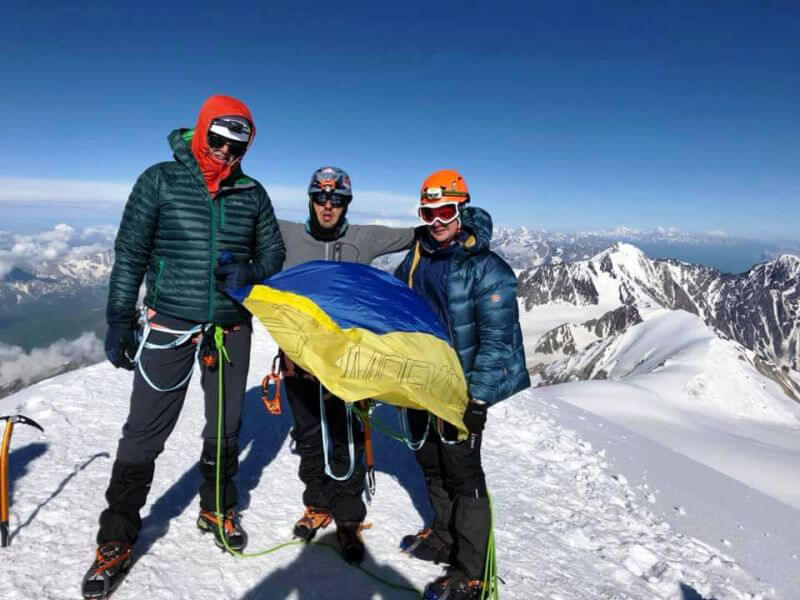 Now that time has passed and emotions have subsided, I wanted to highlight five key points of our adventure.

1. the big mountains are a huge reason for change. We all came back already different people. You transform - huge efforts (both physical and mental) in the preparation stage and then directly on the mountain - change your mind. Hopefully for the better).

2- The clichéd phrase "better than the mountains can only be a mountain" is absolutely true. I do not know how, but all along the way you look at the giants around you and do not get tired of admiring them.

3. Occasional living in the harshness of everyday life is a prerequisite for getting high in everyday life. It's an unreal pleasure just to sleep on a mattress with a sheet and take a shower.

4. In the mountains one reveals himself to the maximum. Very glad my companions turned out to be so cool!)

5. The only disadvantage of such expeditions is a long parting with the family. You miss your nearest and dearest, and on arrival you aspire to spend time together, to give them positive and joy. 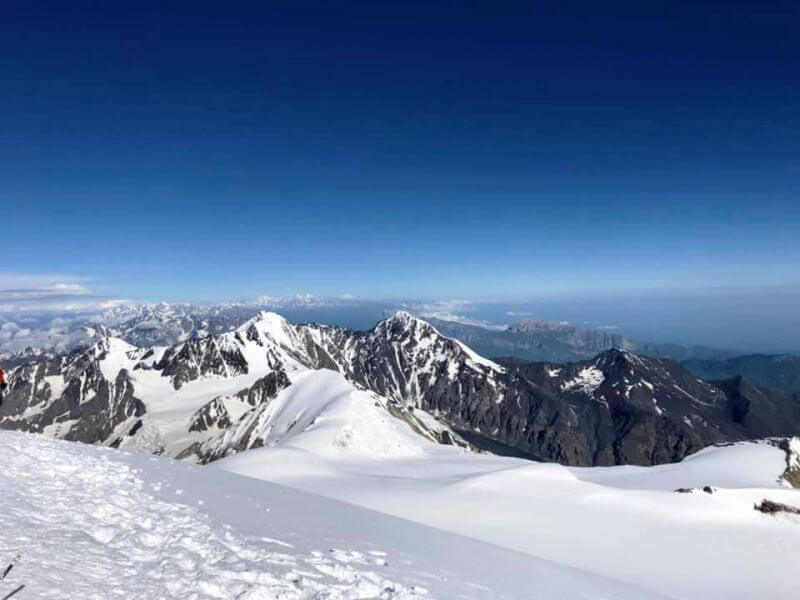