Backpacking in Mingrelia - wild corners of Georgia, the Toba lakes💚
Georgia
Author: Catherine Chernyavskaya, Belarus, Minsk
Overall rating
Teamleader rating
Manager rating
I had already gone to the Carpathian Mountains with Kuluar - that was my first and really delightful hike - up the Gorgan waterfalls. Now I wanted to go to higher mountains. I chose Georgia.

How I got from Minsk to Georgia was a real adventure. Because I flew through Lviv (Belavia raised prices), and on the way to Lviv the Ukrainian carrier (or rather the bus driver) drowned my backpack with all my stuff - he just had 20 cm of water in the luggage compartment, and all the bus passengers had wet luggage. The only difference was where your luggage lay - the degree of wetness depended on that. The driver knew he had water in his luggage, but so kindly did not warn anyone. I had to dry my stuff and my backpack later at the airport, good thing it was sunny. Then at the last moment the Ukrainian airline Yanair postponed the flight by three hours. So I arrived in Batumi at 11 p.m. and not at 8 p.m. as planned. And for a minute - I had to get to Kutaisi. And on a budget, not by cab. Of course, I don't speak Georgian, and this was my first time in Georgia. It takes 4 hours by bus from airport to Kutaisi - just take a bus (I read it on the internet). Except that at 11 p.m. those buses weren't running anymore. The cab driver brought me to the last bus to Kutaisi, and what was especially nice - he agreed in Georgian to drive me there, and for the same price as usual, not the night fare. In general, at 3 a.m. I was in Kutaisi, and on foot I found a hostel, where we agreed to meet. At 10 a.m. we had to leave for the mountains. 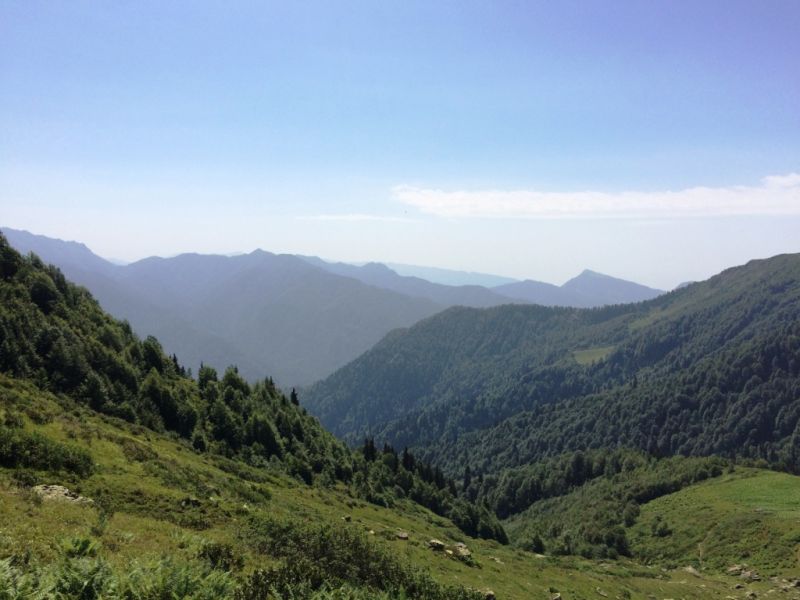 The group was very small - five people. This is both good and bad at the same time. It's good because a small group is more mobile. But in a larger group there are always more interesting people to talk to. In the morning we repacked our backpacks - because (and very cool) we could leave unnecessary things to the driver - he will take us away from the route in six days. And we went. It was the beginning of August. There was a terrible heat. We reached the village, where the mountains began, and got into MAZ. Well, how did it work - for your understanding, there were three places in the cabin, and we were driving in the open body. We drove uphill through the forest on such road - the trail of the machine track, on the serpentine. The same driver of the Maz drove that trail. The tires on the Maz were as bald as a woman's knees. On the turns the truck would not fit, it went backwards and we hung over the abyss for a while in the back of the truck. The driver had some chacha (Georgian moonshine) on the way and was driving very cheerfully. We reached the road well. The views of the mountains on the way were amazing. 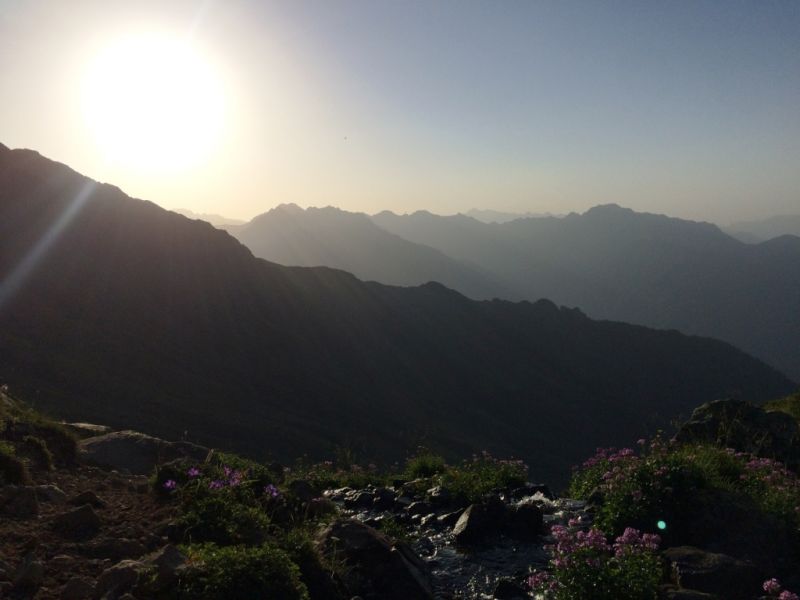 We set up camp, cooked dinner, slept overnight, and began our journey in the morning. Sunny mountains, waterfalls. Goats grazing. Bathing in a mountain waterfall. But we didn't pass much in the first day - two people felt badly (a girl had a stomach, a boy's muscles failed), so it was decided to camp. Night came, summer and warm. I slept alone in the tent, and strange noises began to come from outside. So wild and unfamiliar. And I was so scared and didn't know what was going on out there. I worked up the courage to look out of the tent. It was a moonlit night. I could see everything. It was the horses that came to our tents. Imagine - we are high on the mountain, the moon is quietly lighting the slope - you can see the valley below, and the blue sky above. And beautiful silhouettes of horses. 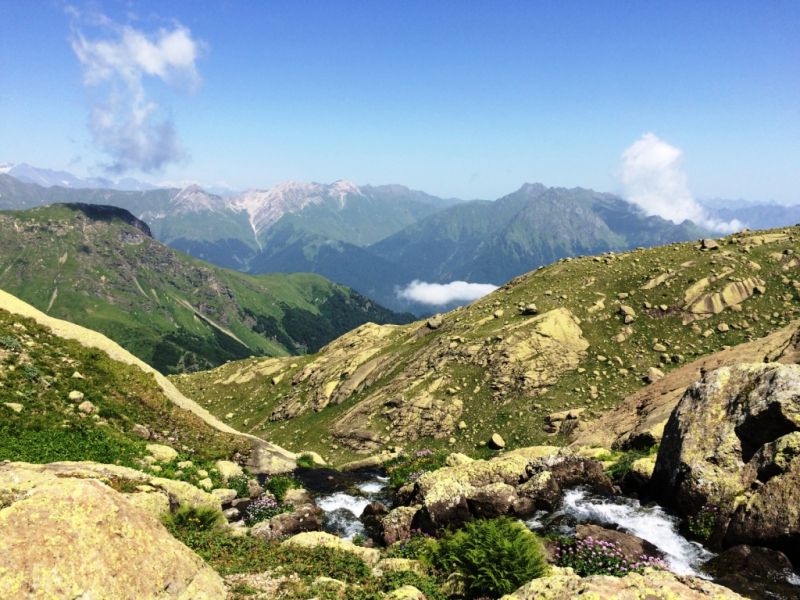 In the morning we went further, we were at an altitude of about 3,000 meters. And we were walking in the snow. I don't walk in snow very often in August, so it was a very unusual experience for me. We passed the pass and descended into the cauldron, which had a lake and a waterfall. The lake is insanely beautiful! So peaceful, untouched by human bustle, majestic in its silence. We had a camp there. We ate borscht) made a radial outing to the mountains at an altitude of 3800. 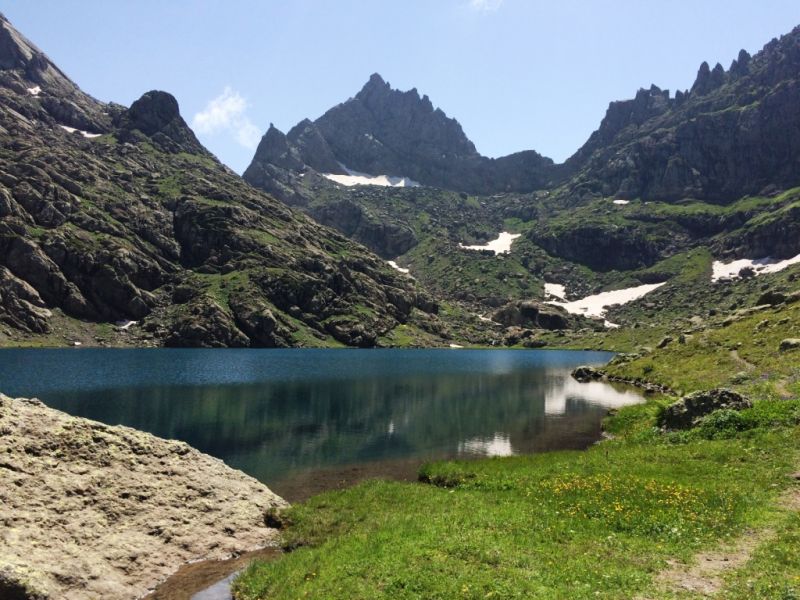 The next day we crossed another pass in the snow. And I will say this - it is not so much fun to walk in the snow. The snow reflects light and is very glaring, and holds a lot of dangers. We came to the next hollow with a large mountain lake. It was very beautiful there. We did a radial and ended up above the clouds - it was unbelievably beautiful! You never see anything like that down there. Inspired by the beauty, we went back to the lake to cook dinner. We were attacked by small flies and ran from them all evening.

The next day it started raining and we were walking down the mountain trails in raincoats. It was like in a movie when you walk and a couple of inches down is a cliff. And when it's raining, it's slippery and you have a 12-15 kg backpack on your shoulders and you have to be careful. Several times we crossed mountain streams - took off our shoes and walked. Somewhere it was not very deep, somewhere it was knee-deep in water and a strong stream. On top of that we met a group of tourists - we had seen them on the first day. And suddenly, in this rainy weather we were seized by the excitement of the race. And on them too. That day we walked a lot. And at a very fast pace, because we were racing against the other group. They overtook us and we overtook them. They left the camp 1.5 hours earlier than us (their camp was nearby and we saw it), so to overtake them was pleasant for self-esteem, like we are so fast. It was funny in places. Their group was larger than ours, there were girls, obviously very tired. We came to the stream, quickly took off our shoes and quickly crossed. They followed us. In their group a few guys quickly crossed - but part of the girls are afraid to cross - the stream quickly and the water to the hip. And we already put on our shoes and went out, happy with ourselves. By the evening we were walking on our last legs, we could hardly move. But we overtook them. We walked through a green forest - ferns and mosses. And nettles and brushwood. I didn't get stinged by nettles the whole way, which couldn't have been happier. But once we set up camp, I started pitching my tent and accidentally sat on a nettle. 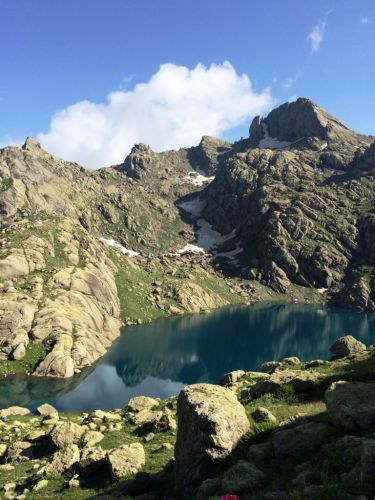 I will say that the whole descent was rainy - it just rained a little less, a little more. On the last day it was foggy and very wet, and it was a long way down, and I was very tired at the end. We were such hedgehogs in the fog. You walk and the shroud is in front of you. When we reached the mountain river at the end of the trail, we enjoyed swimming in the icy water. We were met by the driver, who had to take us to Batumi. And it started to rain heavily. The backpacks were stacked on top of the car, and when we got there, they were soaking wet. Five hours later, already in darkness, we arrived at the sea in Batumi - tired, wet, and inspired by the mountains and nature.